In the previous column, I suggested that the production-line high-current grounding impedance test was unlikely to identify damaged or cut strands in a stranded wire. I  presented test data and an explanation that, for 3 mm lengths, 4 or more strands of 36-strand, 18 AWG wire will carry 30 amperes for 1 minute or more. I noted that 30 AWG wire in free air, with only 5 amperes, will fuse open in a few seconds.

The reason the stranded wire, with most strands open, passes the 30-ampere test is due to the short length of the current-carrying strands together with the heat-sinking provided by the other strands.

Ironically, since I wrote that article, we incurred an incident where the power cord ground wire was damaged and only a few strands remained over a distance of 10 mm or so.

Our production-line test is 30 amperes for 2 seconds. This test is required by one of our product certifiers.

Our power cord supplier, in molding the plug onto the cord, stretched the ground wire such that most or all of the strands of the ground wire were broken. The connection was intermittent and was a function of bending the cord at the plug end.

As predicted, our 30-amp test did not find the problem. We found the problem because the connection was intermittent. We saw the stretched and broken wires with x-ray photos of the plug.

This is more proof that the 25- or 30-amp test as a production-line test is no better than a simple continuity test!

Let’s now consider whether or not the high-current test will find a loose screw connection.

I set up an experiment consisting of a Taptite threaded hole in sheet steel, an M3 screw with integral lockwasher, and a closed-loop terminal.

I connected one terminal of the high-current sourcing milliohmeter to the steel chassis. I connected the other terminal to the closed-loop terminal.

I connected the terminal to the chassis by means of the screw, moderately tight. I measured about 4 milliohms at 25 amperes.

I tightened the screw firmly. 3.2 milliohms.

Or, the circuit was open.

I then removed the screw and just touched the terminal to the steel chassis. Again, if a connection was made, the resistance was 7 to 4 milliohms, or else was open.

I conclude that a loose screw is either open, or it is a few milliohms. The 25-ampere test, in itself, will not identify a loose screw.

Conclusion
For production-line testing, the 25- or 30-amp grounding continuity test is not likely to identify construction anomalies that would not also be identified by a simple low-current test.

Acknowledgements
Thanks to Bruce Campbell of Hypatia, Inc. for providing equipment and advice in testing the wire.
Copyright 1997 by Richard Nute  Originally published in the Product Safety Newsletter, Vol. 10, No. 2, April-July, 1997 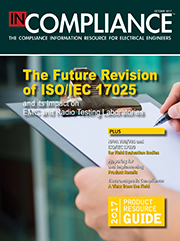