MIL-STD-464C – A Review of the Latest Revisions to the Standard: Part 3

This is the last in a three part review of the newly released MIL-STD-464C, “Electromagnetic Environmental Effects Requirements for Systems.” The following is a summary of Parts 1 and 2 of the review, then on to new material.

MIL-STD-464 is the DoD top-level E3 requirement set for procurement of complete or modified systems. “Systems” meaning an integrated platform of one type or another, such as a ground or air vehicle, a ship or submarine, a spacecraft or launch vehicle. Note that some systems can be parts of other systems, such as an F-18 fighter aircraft that operates from an aircraft carrier.

MIL-STD-464C is the latest in a long line of standards that goes back to at least MIL-I-6051, Interference Limits and Methods of Measurement; Aircraft Radio and Electronic Installations, released in 1950. The -6051 series culminated in MIL-E-6051D, Electromagnetic Compatibility Requirements, Systems, released in 1967 and used until MIL-STD-464 replaced it in 1997.

The A & C revisions of MIL-STD-464 amend the original release, but are evolutionary, not revolutionary, changes. MIL-STD-464C has many changes, so many that the new Section 6.8, “Changes from Previous Issue” states, “Marginal notations are not used in the revision to identify changes with respect to the previous issue due to the extensiveness of the changes.” However, there are no major departures from MIL-STD-464A. There are some additional requirements, and changes to environment definitions, but the overall standard has the same look and feel and if readers have worked with MIL-STD-464A, they will be right at home with the “C” revision. In fact, the changes are subtle and buried enough that the point of this review is to flag things that might not leap out at the reader at first glance. This review functions as the non-existent “marginal notations.”

Aside from the contractual aspect of being the E3 discipline procurement standard, the appendix of MIL-STD-464C continues to be where the really good lessons-learned type information may be found. The appendix has been significantly revised. For each main body change identified in the article, the reader is well-advised to seek out the corresponding Appendix section(s).
Part 1 of the review gave a broad-brush treatment to what was new in the standard, the high power microwave requirement and the co-located systems compatibility requirement and then went through Section 3 definitions and listed all the changes.

Section 5.4 is the High Power Microwave sources section. The requirement is only applicable if specifically invoked by the procuring activity. The requirement is very high level and very succinct. Much supporting information is to be found in the appendix.

Section 5.5 (5.4) Lightning Table VII (-464A Table 2A) adds a new component called Ah, Transition zone first return stroke. The new component is described: “NOTE: Current Component Ah is applicable in the Transition Zone 1C and represents the estimated shape of the first return stroke (Component A) at higher altitudes.” The old Table 2B is now Table VII, with no other changes to it. Figure 1 has separate expanded scale lightning component waveforms.

Section 5.6 (5.5) EMP requirement is unchanged, but there is a change in the appendix. The following -464A A5.5 paragraph has been deleted from -464C: “EMP protection should be implemented for selected military systems. Many systems do not have a specific need expressed in their operational requirements for the EMP environment. In these instances, EMP requirements should not be imposed, since protection and verification can merely add unnecessary acquisition costs.”

The effect of removing this paragraph is to make expensive and potentially heavy/massive EMP protection more routine than previously. The intent of the deleted paragraph was to impose EMP protection only on systems where careful evaluation of strategic concerns demonstrated the necessity.

Section 5.7 (5.6) Subsystems and equipment electromagnetic interference (EMI) requirement is unchanged, but the following new statement appears in the appendix: “For aircraft applications where equipment verification has not been completed prior to first-flight use on the aircraft, the following MIL-STD-461 (or equivalent) testing should be completed prior to flight to ensure flight safety: RE102, RS103, CS114, CS115, and CS116 for safety-critical equipment and RE102 for all other equipment.”

Section 5.8 (5.7) ESD adds wording relating to duding, which did not exist in -464A. This is also reflected in the appendix.

Section 5.8.1 (5.7.1) adds applicability to “any man portable items that are carried internal to the aircraft.” It also adds extra information defining the ESD “gun” used to verify performance.

Section 5.8.2 (5.7.2) Precipitation Static adds the following quantitative requirement: “The system shall protect against puncture of structural materials and finishes and shock hazards from charge density of 30 uA/ft2 (326 uA/m2).” Given that number, and the area over which that current density is deposited, a design solution in terms of bonding resistance for static wicks can now be determined.

Section 5.8.3 (5.7.3) Ordnance subsystems. Compliance verification, in addition to MIL-STD-331 which is referenced in both standards, now also refers to AECTP 500, Category 508 Leaflet 2 for ordnance. Description of the actual “ESD gun” is amended to add an NTE inductance of 5 uH. Gun capacitance and discharge resistance remain unchanged.

Section 5.8.4 Electrical and electronic subsystems (new in -464C). “Systems shall assure that all electrical and electronic devices that do not interface or control ordnance items shall not be damaged by electrostatic discharges during normal installation, handling and operation. The ESD environment is defined as an 8kV (contact discharge) or 15 kV (air discharge) electrostatic discharge. Discharging from a 150 picofarad capacitor through a 330 ohm resistor with a circuit inductance not to exceed 5 μH to the electrical/electronic subsystem (such as connector shell (not pin), case, and handling points). Compliance shall be verified by test (such as AECTP 500, Category 508 Leaflet 2).”

There is supporting new rationale appendix material in Section A5.8.4.

Section 5.9.3 (5.8.3) Hazards of electromagnetic radiation to ordnance (HERO). The section has been augmented. “Electrically initiated devices (EIDs) in ordnance shall not be inadvertently actuated during or experience degraded
performance characteristics after exposure to the external EME levels of Table 3A for both direct RF induced actuation of the EID and inadvertent activation of an electrically powered firing circuit. Relevant ordnance phases involving unrestricted and restricted levels in Table IX (old Table 3A) are listed in Table X (old Table 3B). In order to get a HERO classification of “HERO SAFE ORDNANCE” at the all-up round or appropriate assembly level, the ordnance or system under test (SUT) must be evaluated against, and be in compliance with, Table IX. Compliance shall be verified by test and analysis using the methodology in MIL-HDBK-240.” 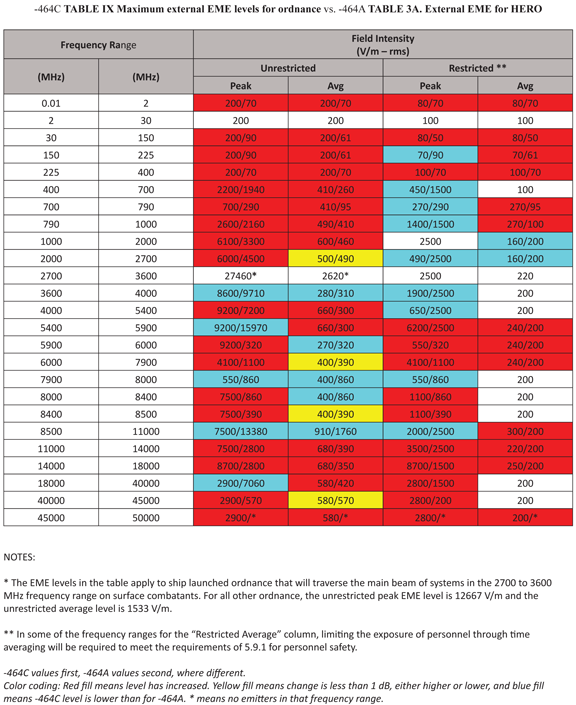 Section 5.14 (5.13, expanded) System Radiated Emissions. Includes old 5.13 EMCON section (unchanged), but adds a new 5.14.2 Inter-system EMC as described at the beginning of this review. “Unintentional radiated emissions from overall Army tactical ground vehicles shall be controlled such that antenna-connected receivers located in nearby Tactical Operation Centers (TOCs), vehicle convoys and other systems meet their operational performance requirements. Compliance shall be verified by test and analysis.”

The supporting rationale appendix section is completely revised with a great deal of explanatory material for 5.14.2. 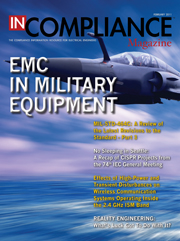