This article discusses the common-mode and differential-mode radiation from cables and presents the measurement results from the SMPS connecting wires. 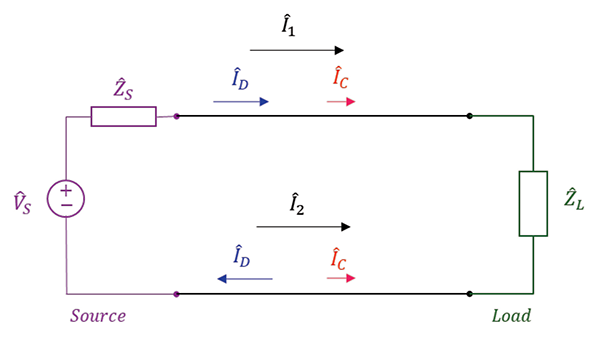 Radiation from Differential- and Common-Mode Radiation

Differential- and common-mode radiation can be modeled as the radiation from two Hertzian dipoles driven by a noise voltage.

Let’s begin with the DM radiation. Consider the scenario shown in Figure 3. where two linear antennas (conductor 1 and conductor 2) placed along the x-axis, carry the differential-mode currents along the z-direction. 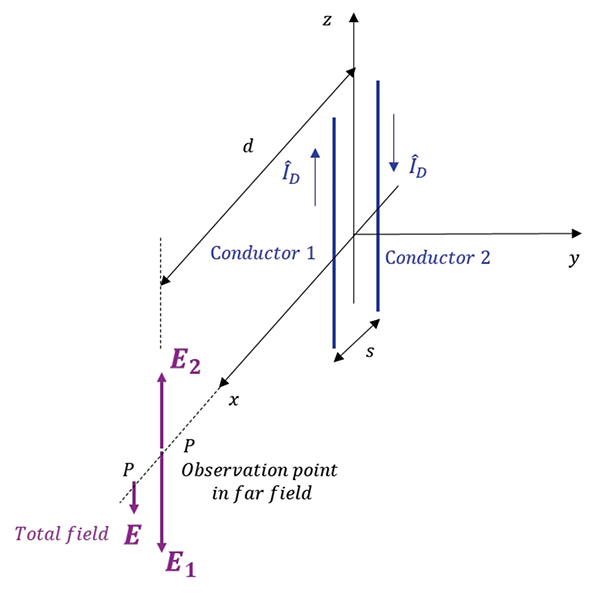 Treating each antenna as a linear dipole of length l, the magnitude of the total field at a distance d from the antennas is, [2],

where f is the frequency of the current carried by the antennas. 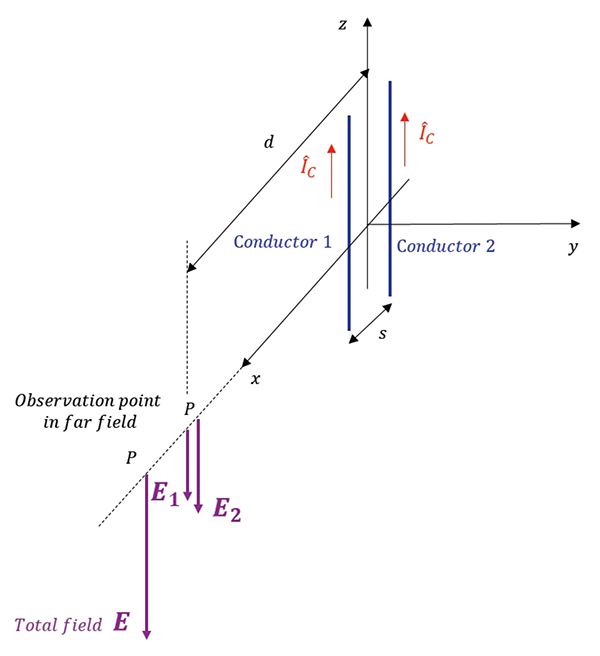 The radiated fields due to both conductors are of same directions, thus reinforcing each other to give the total radiated field as shown. The magnitude of the total field at a distance d from the antennas is

It should be noted that the CM currents could be several orders of magnitude smaller than the DM currents, yet the radiation from them could exceed the regulatory limits.

For instance, it takes only 8 µA of the CM current to exceed the FCC Class B limit of 100 µV/m at a distance of 3m, as the following calculations show.

From Eq. (2) we can calculate the expression for the CM current in terms of the maximum allowable field strength, [3].

It is, therefore, no surprise that the CM current is of great interest (or fear) to the EMC engineers. Next, we will discuss the DM and CM current measurements from the cables connecting a SMPS.

Figure 5 shows the test setup to measure the differential- and common-mode currents. 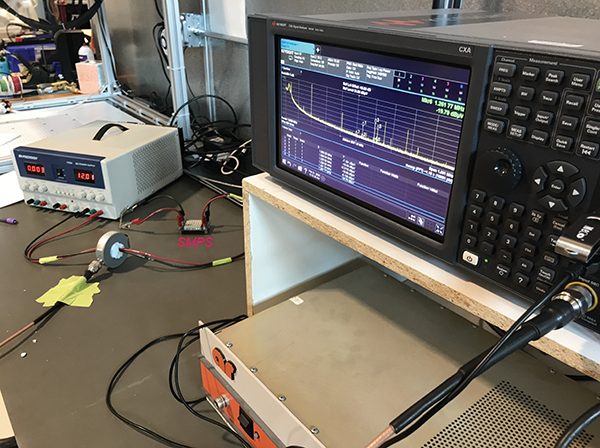 The current probe used is shown in Figure 6. 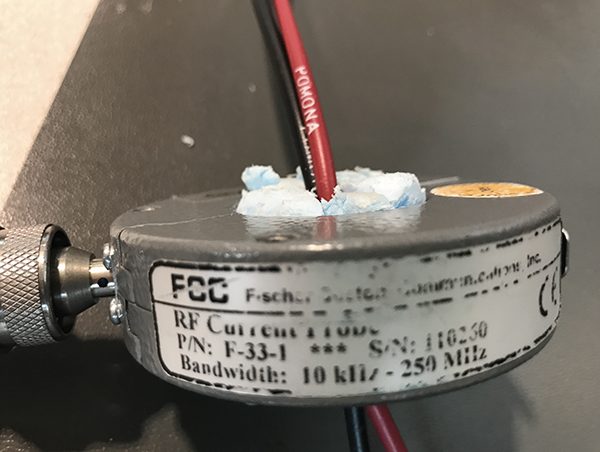 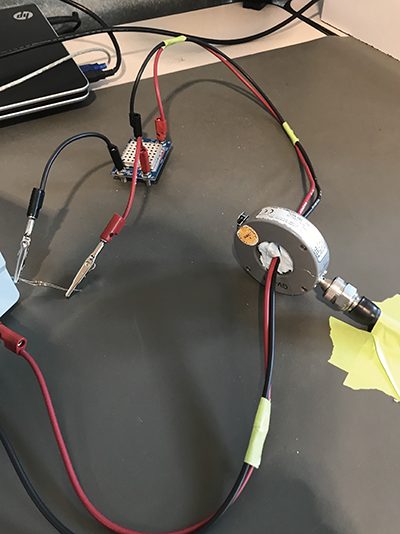 With both wires inside the probe, the differential current fields (ideally) cancel each other, and the current probe measures only the common-mode currents. To be precise, it (ideally) measures twice the value of the CM current, i.e., 2IC. The measurement results are shown in Figure 8 and summarized in Table 1. The measurement values are the relative values in the units of dBµV. 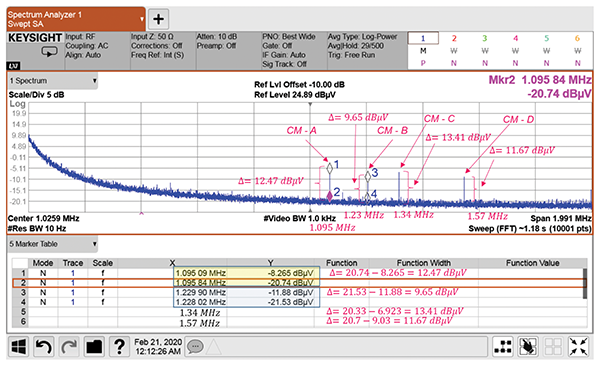 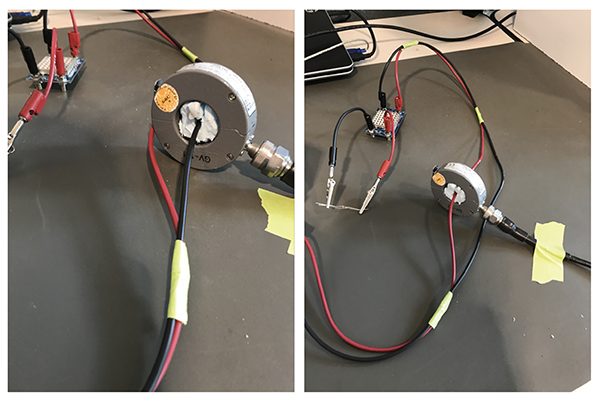 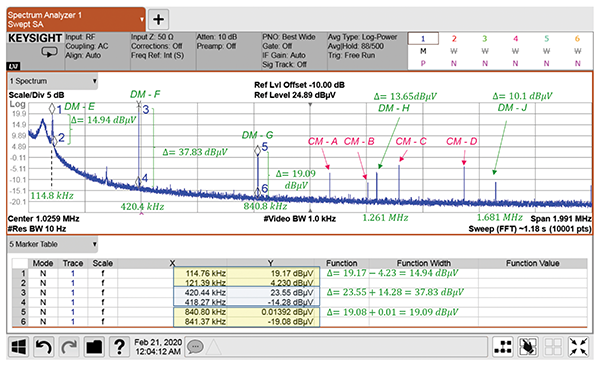 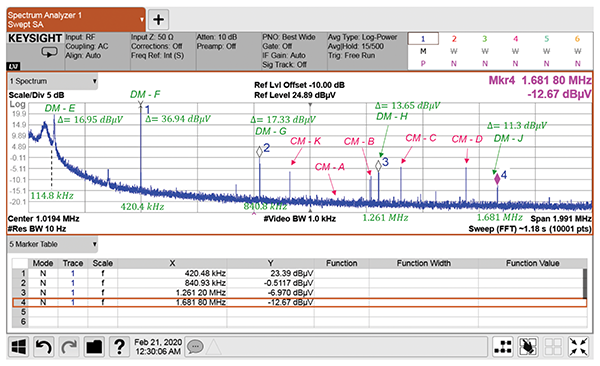 The author would like to thank Ken Javor for his comments and suggestions included in this revised version.