Automobiles present a very harsh environment for the electrical and electronic devices incorporated into them. This includes the automobile’s electrical system that powers them, which is by no means ideal. For this reason, there are a variety of electrical disturbance tests that have been defined that these devices must be tested under to validate they will survive and function properly in use. Two well-established industry standards that define a wide range of electrical disturbance tests are ISO-7637-2 and ISO-16750-2. There are several other similar standards, both industry-based and manufacturer-specific, that are basically derivations of these two ISO standards.

The ISO-7637-2 disturbances having microsecond to nanosecond-fast rise and fall times are primarily a result of voltage spikes on the DC voltage bus created by switching inductive devices on and off, or electrical devices creating a stream of voltage spikes while active. One exception to all the very high speed disturbances in ISO-7637-2 is test pulse 2b of section 5.6.2. This test pulse addresses the electrical disturbance created by an electrical motor, like that of a blower motor within the heating and air conditioning system. When the motor is running and then the ignition is switched off, the motor will change over from consuming power to generating power. The result is it creates a relatively slow voltage pulse back onto the electrical system, until all the energy from its spinning mass is dissipated. Test pulse 2b is depicted in Figure 1.

The first part of the test pulse is a step drop due to the ignition being switched off, while the second part is a pulse from the motor regeneration energy. This motor regeneration pulse is referred to as a double exponential waveform. This is a characteristic shape of many types of pulses, where stored energy is dumped onto, and then subsequently dissipated by a load. Other test pulses in ISO-7637-2 have this characteristic shape, but are of much shorter rise and fall times.

Unlike other tests that call out for a generator as depicted in Figure 2, the ISO 7637-2 standard instead recommends using an arbitrary waveform generator driving a DC power supply/amplifier with an analog control input for generating test pulse 2b of section 5.6.2. This is sensible given its complex shape, consisting of a step drop followed by the double exponential pulse, and having relatively slow rise and fall times. Another advantage of using an arbitrary waveform generator and DC power supply/amplifier is that its output is independent of the DUT’s load impedance. This eliminates the iterative trial and error approach to get the desired pulse, that can be associated with pulse generators that make use of reactive components.

While the step portion of test pulse 2b is easy to define, how does one define the double exponential motor regeneration pulse? There are a few possible approaches, including:

The double exponential expression for test pulse 2b is basically a fast exponential being subtracted from a slow exponential, as shown by the following:

The trick of making use of this double exponential expression is to understand how to relate the constants in the equation to the test pulse parameters shown in Figure 1. It turns out that this is relatively straight forward for this application, once understood. In good part, this is simplified due to the large relative difference between test pulse 2b’s rise time compared to its duration. This reduces the overlapping interaction between the two exponentials by a considerable amount, keeping the mathematical expression relatively straight forward to apply.

Taking the difference of these two log values and then dividing it by the rise time, tr, normalizes the 90% to 10% exponential decay to rise time, tr. Thus, the time constant K2 for the fast exponential in the double exponential expression can be expressed as:

Thus, the total time it takes for slow exponential to decay from 100% to 10% is (td + 0.0148 * tr). In practice the additional time, 0.048 * tr, can be neglected, but has been included here for completeness. The slow exponential decay time is primarily associated with the test pulse duration.

Taking the difference of the two log values and then dividing it by the value (td + 0.0148*tr) normalizes the 100% to 10% exponential decay to the test pulse’s rise time and duration. Thus, the time constant K1 for the slow exponential in double exponential expression can be expressed as:

Where td is the duration and tr is the rise time of the test pulse.

Except for the limiting case with a rise time of zero, the base double exponential waveform will always have an amplitude of less than one due to the overlap of the two separate exponentials. Thus, some gain correction is required, which is provided by the gain correction factor, G. As the ratio of the duration time, td, to rise time, tr, lessens, there is more overlap between the two exponentials, requiring additional compensation be made, to adjust for increasing loss in amplitude. In the example illustrated in Figures 3 and 4, the ratio of the duration to the rise time was 200 to 1. A gain correction factor of G = 1.03 was used to compensate for a 3% amplitude loss. 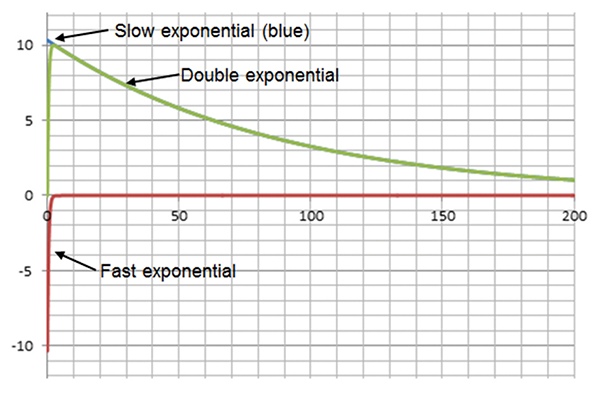 To generate the actual test pulse 2b, a Keysight N7951A 20V, 50A, 1KW Advance Power System DC power supply was used, as it has suitable bandwidth and power for the application, and already has arbitrary waveform generation capabilities built in. Companion Keysight 14585A software was used to create the arbitrary waveform sequence consisting of a voltage step drop followed by the mathematical expression of the double exponential just defined, and load it into the N7951A. The resulting test pulse waveform was run, captured, and in turn displayed by the 14585A software, as shown in Figure 4. 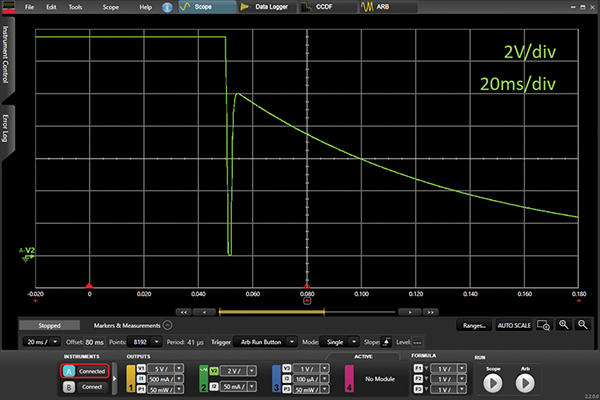 Edward Brorein is an application specialist at Keysight Technologies, Inc. He received his BSEE from Villanova University in 1979 and his MSEE from the New Jersey Institute of Technology in 1987. Ed joined Keysight Technologies (at the time Hewlett Packard) in 1979 and worked as an R&D engineer, manufacturing engineer, and presently as a marketing engineer, helping customers using power products, both in manufacturing and R&D. Ed has been actively and deeply involved with the design, engineering, and application of DC power products for testing a variety of electronic devices.