This article reports on the findings of a study which was interested in characterizing a lossy material for potential use in fabricating air vents for the chassis of electronic products that would reduce high frequency emissions below that of conventional perforated metal vents.

The test setup consisted of a small reverberation chamber, with drive signals provided by and detection using a vector network analyzer, which was controlled by a custom control program. Test samples with different opening sizes were tested, and the results were compared to those using a conventional perforated metal panel. Additional samples were silver plated and tested to simulate the effect of vents constructed using the lossy material installed on top of a perforated metal panel. The reference configuration was a coaxial cable inside the chamber that was terminated with a 50 Ohm closed standard.

In this article, we present measurement results that compare the emissions from the various test samples to those using a conventional perforated metal panel vent.

Electronic equipment often requires the use of air vents to allow for air circulation to cool the components. Those air vents can also be a significant path by which electromagnetic radiation is allowed to escape the enclosure, potentially causing interference to other equipment or allowing radiation to enter the enclosure and cause interference to the equipment due to radiation from other equipment. As the frequencies of operation increase, the size of the openings in the air vents must be decreased to maintain the same degree of shielding to prevent these effects. The use of a “lossy” material that absorbs high frequency electromagnetic radiation to reduce these effects without unduly restricting the passage of necessary cooling air into and out of the equipment was proposed.

This study evaluates the emitted radiation from a test box fitted with vent covers fabricated with the lossy material in different configurations with the radiation emitted from a vent conventional cover constructed of perforated metal.

The test equipment used for these measurements consisted of a vector network analyzer (VNA) and a small reverberation chamber which was constructed in a shipping trunk with dimensions approximately 0.71 x 0.61 x 0.53 m, as shown in Figures 1-3. Reverberation (“reverb”) chambers are ideally suited to this type of measurement, as they capture all the radiated energy from a source, regardless of polarization or angle. More information on reverb chambers can be found in Reference 1. 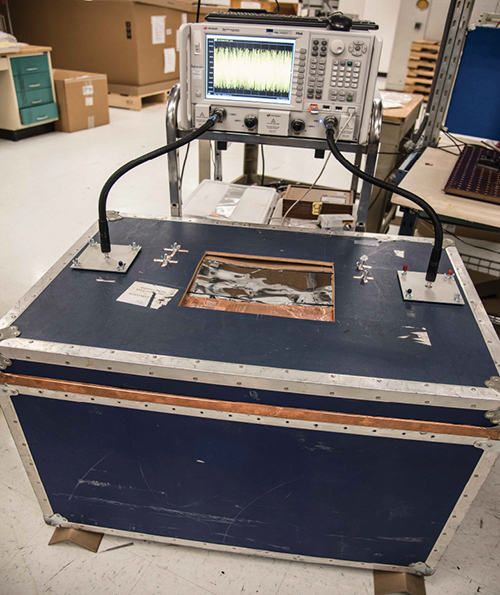 Connection to the interior of the chamber was made through 2.92 mm feedthrough connectors through the top cover. The chamber was lined with conductive foil and copper tape and incorporated a Z-fold tuner on a horizontal axis as shown in Figure 2. The position of the tuner was controlled using a stepper motor. The lowest usable frequency for the chamber was approximately 1 GHz based on prior measurements, and the chamber Q was approximately 2.5 x 1010. Figure 2 also shows the test box which was used as the drive signal source for these measurements. 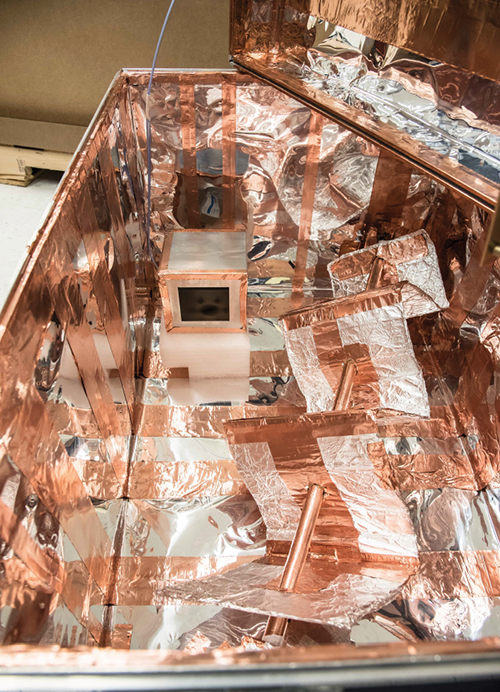 Two 1-18 GHz horn antennas were mounted on the underside of the chamber cover, as shown in Figure 3. One antenna was used for transmitting radio frequency (RF) energy into the chamber for the purposes of chamber calibration, while the second was used to receive energy. The transmit antenna is left in the chamber during normal sample measurements, to avoid changing the chamber loading conditions. 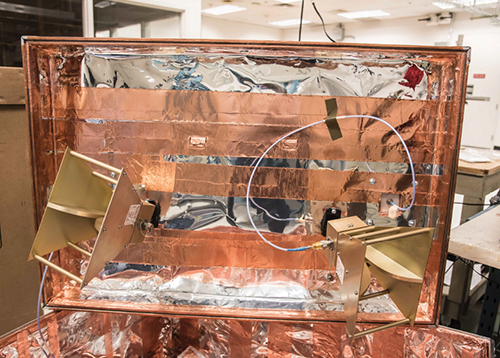 The details for the network analyzer, the accompanying electronic calibration (ECal) unit, and horn antennas are listed in Table 1.

The VNA was calibrated using the ECal unit, using the measurement conditions listed in Table 2. A measurement of the electromagnetic radiation transmitted from one antenna and received by the other antenna was made, represented by the s21 data, across the range from 1-40 GHz. (Although the antennas are specified only to 18 GHz, the test data show that they are actually effective up to 40 GHz.) The data were captured at the first tuner position, then the tuner was rotated using a stepper motor controlled by a custom Python script to the next position, and the data measured at each tuner location. The measured s21 data were then smoothed, those data were averaged over the tuner positions, and the results were saved. This same process was followed for the subsequent sample measurements.

The chamber was calibrated using the two horn antennas previously described, with data acquisition performed using the Python chamber control program. A screen shot from that program is shown in Figure 4. A plot of the “two antenna” chamber transfer function measurement is shown in Figure 5, showing the transfer function of the chamber and antennae. 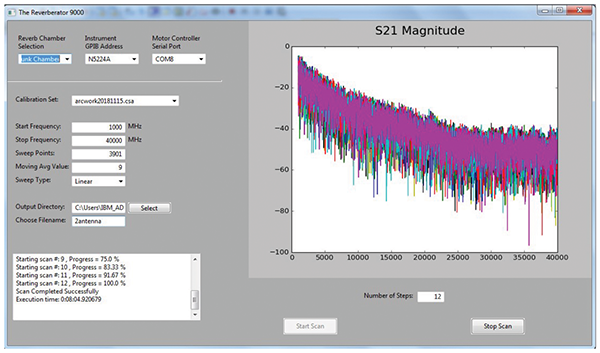 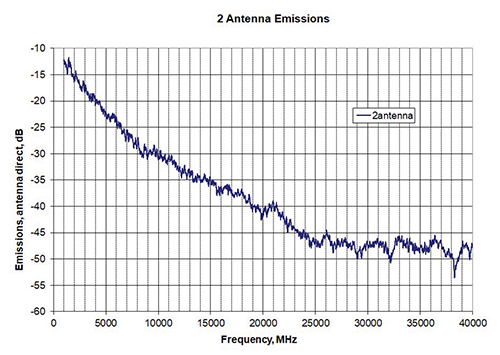 Once the chamber was calibrated, the drive cable from VNA port 1 to the transmit antenna was disconnected, and a 50 Ohm terminator attached to the cable. The measured energy data obtained in this configuration represents the noise level present in the chamber and VNA receive circuitry without any driving signal. This also shows the dynamic range of the chamber, as defined by the difference between the minimum signal level that can be detected in the chamber with this equipment configuration and the maximum energy when sourced by the transmit antenna. A plot of this result is shown in Figure 6. This is also the noise floor level, which is subtracted from all subsequent sample measurements. The sample measurements are therefore data relative to this level. 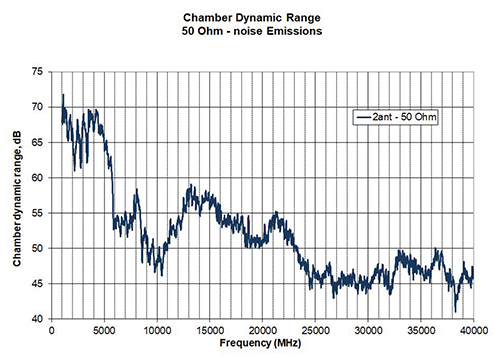 An aluminum chassis box was procured, and a circular hole was cut in the box bottom to accommodate a waveguide feed horn mount with a rectangular opening, as shown in Figure 7. A square opening was cut in the metal box cover on the opposite side of the box, where the test samples were to be mounted. The chassis box and feed side cover joints were covered with copper tape to avoid radiation leakage at the seams.

Figure 7: Test box, showing feed side (a) and vent opening side (b)

Next the terminator was removed from the drive cable, and the cable was connected to the feed horn mount on the test box, to transmit the energy from the

VNA through the device under test (DUT) (the box and vent cover), and to the antenna connected to the VNA receiver.

Eight air vent samples constructed using the lossy material were supplied by the vendor, which were intended to be mounted over the square opening in the facing side of the chassis box, as shown in Figure 8. A summary of the supplied samples is listed in Table 3. 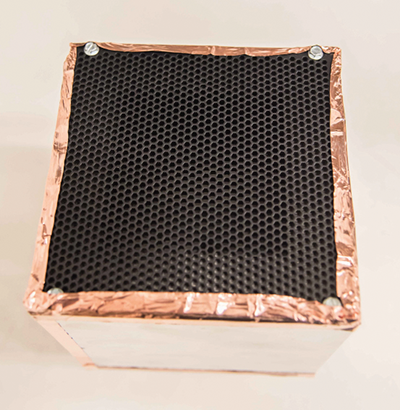 Three of the air vent samples were fabricated with a hexagonal hole pattern with maximum opening size 2r of approximately 3.5-3.8 mm, and three with a maximum opening size 2r of approximately 6.8-7.3 mm. These were measured across the two opposite vertices of the hexagon, as shown in Figure 9. The samples were fabricated using water jet ablation, so there was some variability in the opening sizes across the samples. 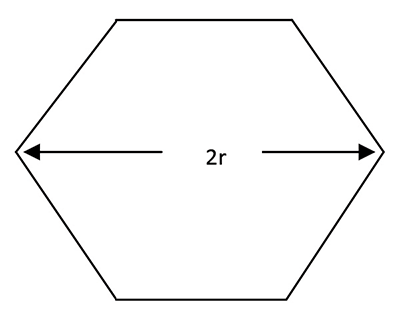 One additional sample of each type was supplied, with one side of the lossy vent cover silver plated to approximate the effect of installing a lossy material sample over a conventional metal panel with the same opening pattern as the lossy vent material, as shown in Figure 10a. These were designated samples 1P (small openings) and 2P (large openings), respectively.

In addition, a metal sample was constructed with TBD mm square openings, which were approximately the same opening size as large opening lossy samples 2A-C. This perforated metal sample is shown in Figure 10b. The opening areas per unit area and in per cent is listed in Table 4 for each sample type.

The received energy was then measured for each test sample, the smoothed data were averaged across all 12 tuner positions, and the smoothed, averaged data for the terminated cable (“noise”) case were subtracted from each set of measured results. Note that a higher level of measured energy indicates less effective reduction in emissions. That set of data was then plotted with data from various sample configurations to gauge the effectiveness of each configuration.

Following the calibration of the chamber, measurements were taken using the lossy samples. The first experiment was to measure the two sets of lossy material with the different opening sizes. The results within each sample set for the lossy material were very consistent, as shown in Figure 11. The emitted energy was approximately 20 dB higher for samples 2 than samples 1, which was as expected due to the larger size of the openings for samples 2. 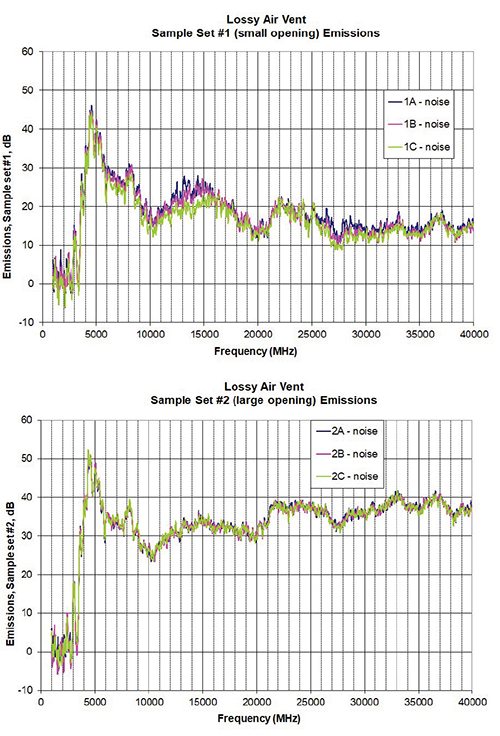 Measurements were then taken using the open box and the box with the perforated metal vent cover installed, for reference purposes. That data was compared with the results for the lossy samples A1 and B1 in Figure 12. The data show that the perforated metal vent reduces emissions from those of the open box by approximately 10 dB from 1 to approximately 20 GHz, but is ineffective above 20 GHz. The lossy vents are effective at reducing emissions starting at approximately 5 GHz, and provide approximately 10-15 dB of emissions reduction with the large opening case, and as much as 30 dB in the small opening case. The improvement is somewhat frequency dependent, with the small opening sample actually showing increasing reduction in emissions as frequency increased, while the large opening sample emissions reduction remained relatively constant as frequency increased. 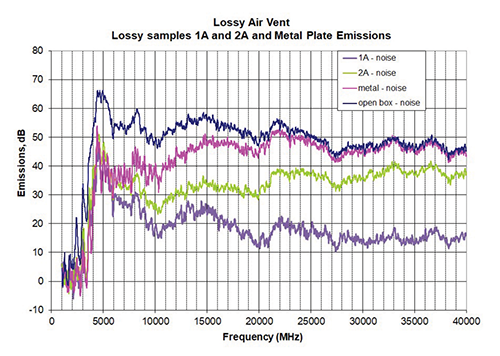 Next, the silver-plated samples were measured, to simulate the effect of an air vent made using the lossy material over a conventional perforated metal vent. Sample 1P was measured with the plated side “down” against the metal plate, while sample 2P was measured both in the “down” and “up” configurations. Figure 13a compares the emissions from the small opening plated sample to those from the unplated lossy material vent with the same size openings. The emissions level is approximately 10 dB higher at frequencies above approximately 1 GHz for the plated sample as compared to the unplated sample, which was unexpected. It is thought that perhaps the metal plating was exciting higher order modes due to reflected energy inside the test box that were not present in the unplated case.

Figure 13b compares the emissions for the plated 2P sample with the larger openings in both “up” and “down” configurations against the results for the unplated sample 2A. Relatively small differences in the emissions were observed, with the “down” plated configuration the highest, followed by the “up” plated and the unplated case. Again, this is counterintuitive since the plated case would normally be expected to have lower emissions than the unplated case due to the shielding effect of the plating. The difference in emissions levels between the plated and unplated samples was dramatically lower in these cases relative to the small opening samples. 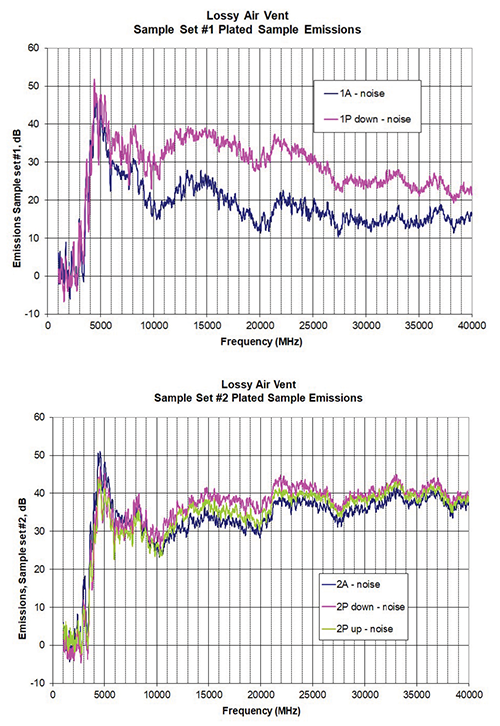 Figure 13: Plated sample results for small openings (a) and large openings (b)

Simulation work is planned to model the plated samples and to help understand the potential causes of the unexpected higher emissions relative to those observed when using the unplated samples.

Dr. Bruce Archambeault is a senior contributor to InCompliance Magazine, and an IEEE Fellow, an IBM Distinguished Engineer Emeritus and an Adjunct Professor at Missouri University of Science and Technology. He is a member of the Board of Directors for the IEEE EMC Society and a past Board of Directors member for the Applied Computational Electromagnetics Society (ACES). Archambeault currently serves as the Vice president for Conferences of the EMC Society. He is the author of the book “PCB Design for Real-World EMI Control” and the lead author of the book titled “EMI/EMC Computational Modeling Handbook”. Archamebeult can be reached at bruce@brucearch.com.

Joseph C. (Jay) Diepenbrock is a signal integrity consultant with SIRF Consultants, LLC. He has authored or co-authored a number of technical papers, and is the Technical Editor of the soon to be published IEEE P370 high frequency test standard. Diepenbrock is a Senior Member of the IEEE and was an EMC Society Distinguished Lecturer in 2013-2014. He graduated from Brown University with a Sc. B. (EE) degree and from Syracuse University with an MSEE, and holds 12 patents. He can be reached at jdiepenb@earthlink.net.