Lightning damage to equipment with a metallic (wired) connection to a communications service has been studied for many years, resulting in a series of Telcordia GR, ATIS and TIA standards in the United States, and ITU-T recommendations elsewhere.

With the development of systems that don’t have a metallic connection to a communications service, e.g., fiber optic systems, the assumption has been that lightning damage won’t occur. How could it? After all, there is no metallic path for the lightning to follow and thus impact the system. So imagine the surprise at some recent reports of customer premises fiber optic equipment that has suffered lightning damage. For example, this report:

I have fiber-optic connection to the phone network. My network consists of a router, 4 Desktops, a game console, and two 1gig switches. These devices are protected by UPS and surge protectors. Last night we had a near hit from lightning. No power disruption. However, my network and POTS phone (wired) went down hard. The router had a red light until I rebooted it. After a reboot it came up with no internet connection. None of my PCs could see each other on the network. The Optical Network Terminator (ONT) power supply and the Router were toast. I lost a host of NICs as well as several ports on the gig switches. The game console seems to be OK and the PC located in the room with the router is fine. My LAN printer’s NIC is toast and will not print.

How could this have happened? There is an explanation, and it has to do with ground potential rise and systems with multiple grounds.

Ground potential rise [GPR] is a result of lightning striking the ground. Current flows away from the point where the lightning hits, creating a series of equipotential surfaces. It’s like throwing a pebble into a pond……

where ρ is the resistivity of the earth (generally being a function of distance, angle, and depth), and I is the lightning current. The important feature of GP is that it falls off as 1/r. In the more general case, it falls off as a power series in (1/r)n. For the simple case just discussed the equipotential surfaces look like those in Figure 1. 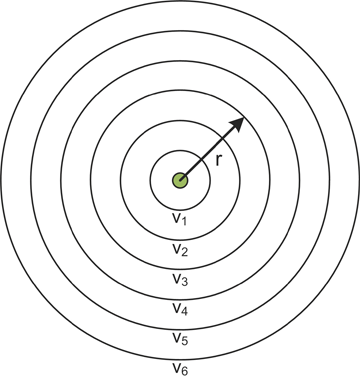 There are two cases to consider: 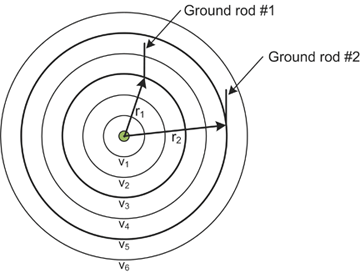 The potential difference PD between the two ground rods is

To see how big the potential difference could be, let’s do an example calculation based on equation (3). To help visualize the situation, let r1 and r2 be in the same direction, as shown in Figure 3 (the angle of r1 with respect to r2 doesn’t affect the calculation of PD – see Sidebar).

Figure 3: Geometry for the example calculation

Assume a 30,000 A surge (a moderately strong lightning pulse 2), and that the lightning strike is 30 m (about 100 ft) from the first ground rod located at r1. In the high lightning areas, the soil resistivity runs 100 – 1000 ohm-meters 3. So for this example, assume 300 ohm-meters. For these assumptions, we can calculate the PD between ground rods as a function (X) of the difference in equipotentials at r1 and (r1 + X) (or as a function of the minimum spacing between ground rods). The result is shown in Figure 4. Alternatively, the distance X between r1 and r2 can be fixed at 10 m and the PD plotted as a function of how far away the lightning is from the structure, as shown in Figure 5. 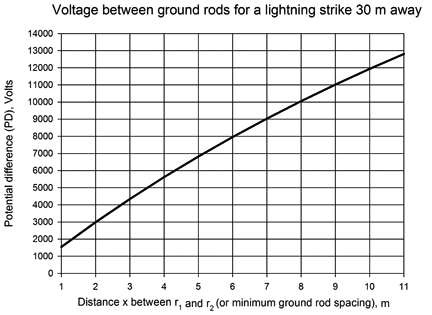 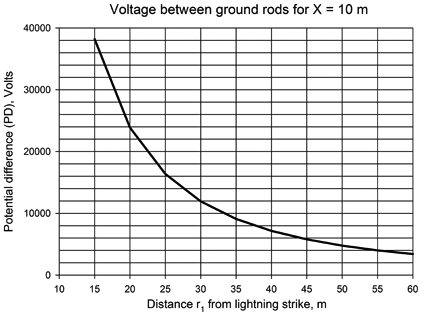 Case 2 – A Direct Strike to Power or Communications

Consider a home with a wired network connected to a communications service via a gateway (Figure 6). The NEC 4 requires both the gateway and the AC power neutral to be grounded, and also requires that there be a bond wire between the grounds. The bond wire may be long if the AC power and the communications are not co-located. 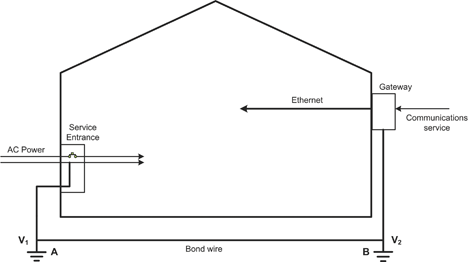 A direct or induced current due to a lightning strike to the AC power will seek a ground, either directly at A, via the bond wire to the ground at B, or a combination of these two. Current flowing into the ground at A will create a GPR with respect to B.

For this case, the lightning current flows in a circuit consisting of the parallel combination of the inductance L of the bond wire and the earth resistance between A and B. Assume the distance X between A and B is 10 m. The bond wire has an inductance of about 1 µhy/m, so L = 10 µhy. The resistance R of a ground rod of length L and diameter d can be calculated from 5,

For a typical ground rod 1.5 m long and 0.014 m in diameter, R = 193 ohms. Assume a moderately strong lightning surge of 3000 A on the AC power line 6. If, as assumed in 6, the surge is a linear ramp with a 3 µs rise time, then an L(di/dt) voltage of 3000 V would be generated. However, surges in the real world are not linear ramps – they are more like double exponentials.

So consider a double exponential with the same 3 µs (nominal) rise time – 3×1000 for this example. The result of applying this surge to the parallel combination of 10 µhy and 193 ohms is shown in Figure 7. 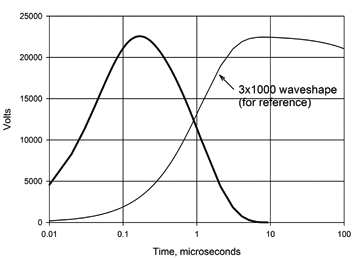 The reason the voltage is higher when the surge is a double-exponential is that the rise time of the double exponential is not constant but is relatively steep at the beginning. The actual PD calculated between grounds depends on the assumptions made and could be more or less that those of the examples. The point is that, as in Case 1, a 10 kV PD between grounds is within reason.

Damage to Equipment Without a Wired Connection to a Communications Service

The damage case reported in the Introduction is a useful example for a discussion on how equipment without a wired connection to an external communications service could be damaged by a lightning strike. Figure 8 is a simplified schematic of what the network and equipment layout might have been in the house. In Figure 8, V1 and V2 are the voltages created by the GPR due to the lightning strike. Remember that the lightning strike was a near hit, so from the example calculation, V1 – V2 could easily be in the 5 – 10 kV range. 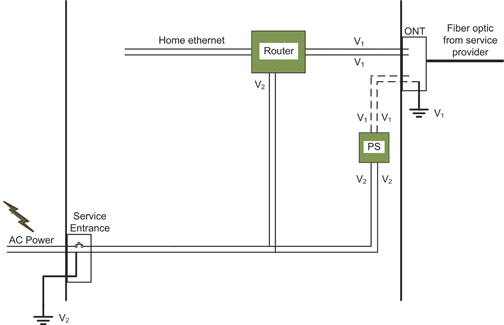 Figure 8: Possible layout of the equipment and connections in the use case

Figure 9: Schematic of the power supply for the ONT

Now consider the power supply PS that was reported damaged. It can be represented schematically, as shown in Figure 9. If the (V1 – V2) resulting from the GPR exceeds the breakdown voltage of the transformer, flashover occurs, with likely power follow destroying the power supply.

Now consider the router failure. The router would likely have been connected to the ONT via an Ethernet connection as shown in Figure 10, where PHY represents the physical layer connections of the equipment to the Ethernet.

Figure 10: Schematic of an Ethernet connection between the router and the ONT

The two grounds have a potential difference between them of (V1 – V2). Points A and B are essentially tied together, so the two equal impedances form a voltage divider, causing a voltage (V1 – V2)/2 to appear at A and B. If (V1 – V2)/2 is between 2400 V and 5000 V, the breakdown voltage of the router transformer will be generally be exceeded, flashover will occur, and the PHY circuit will be damaged. Again from the examples, 3 – 5 kV is a reasonable range for (V1 – V2)/2. If (V1 – V2)/2 did not exceed 5000 V, the ONT would have been OK if its transformer was designed for a 5000 V surge, which is often the case.

The example considered here is one of several similar reports posted on the web, so it isn’t an isolated case. In fact, problems similar to those just discussed have been reported in a recent paper by Tokyo Electric Power 7.

The issue here is that the damaging surges are not coming from the outside world into the house or structure, as has always been assumed. Rather the existence of multiple grounds creates a path for the surge to come from inside the house toward the equipment. As equipment manufacturers generally don’t expect surges to come from this direction, surge protection is seldom provided on inside lines. As a result, equipment may be damaged by lightning surges even though it has passed all relevant standards, and has no metallic connection to the outside world.

It is worth pointing out that the problem exists if there is more than one ground at the house. If there is only one ground, the problem may go away. We say “may go away” because the power network in the house may have multiple grounds, particularly if there is a photovoltaic system on the roof, which could cause problems. But that is another story.