The Origin and Application of the 2.5 mΩ Requirement

The report on which this article is based was put together for internal government use some time ago. But the continued relevance of the information contained in that report recently became apparent when a discussion group on LinkedIn variously labeled the subject matter requirement (2.5 milliohm bond) mysterious, obsolete, “black magic,” and ultimately, unnecessary. Apparently, the LinkedIn contributors had little or no idea of the historical context of the requirement and evoked for this author the quintessential “Dilbert” moment shown here. 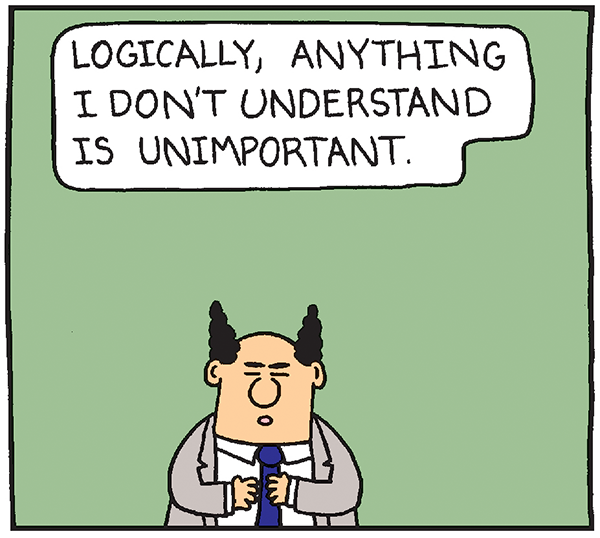 The author was also reminded of a famous observation by Arthur C. Clarke, which is paraphrased as follows:

“Any sufficiently obscure technology is indistinguishable from black magic.”

To help provide some context for their discussion and in an effort to curb the all-too-frequent instinct to “move fast and break things,” the author posted this report to the LinkedIn group, along with the following advice, which applies regardless of your field of endeavor, engineering or otherwise.

“A rule of thumb for handling the ‘mystery of engineering’ is that a lack of understanding is not a condemnation of the misunderstood. Every engineering principle that has made it into a lasting standard had validity at some time. Whether or not it applies in a particular situation depends on the relationship of the problem at hand to the original problem addressed by the requirement.

“Until the original application is fully understood, one has no basis for judging the applicability to any specific case.

“In the broadest possible terms, reality exists independent of our perception and understanding. Sir Francis Bacon said some 500 years ago that ‘Nature, to be commanded, must be obeyed.’ The author’s corollary to that is ‘Nature, to be obeyed, must be understood’.”

With that introduction and background, the following report presents everything one needs to know about the origin and application of the 2.5 milliohm electrical bonding requirement.

The purpose of this report is to document the origins and rationale vs. present practice regarding the now ubiquitous 2.5 milliohm class L & R (lightning and radio frequency) bonding requirements used in aerospace, space, and military vehicles.

Note that, while MIL-B-5087B is long obsolete, the bonding classes survive in MIL-STD-464, and in NASA-STD-4003. MIL-B-5087 is not technologically obsolete, but it contained instructions on how to implement bonds, as opposed to bond performance, and the 1994 SECDEF Perry memo, “Specifications & Standards – A New Way of Doing Business,” required military standards to be either performance or interface standards, but not “how to” standards.

Reference 1, section 3.3.1, says the rationale for their detailed lightning requirements is:

This requirement is unchanged in Reference 2 and is equivalent to maintaining 5 milliohms resistance.

Reference 3, section 3.3.4, has similar wording, but note the change in assumed worst-case lightning attachment (resulting in a 2.5 mΩ requirement):

“…to achieve protection against a lightning discharge current carried between the extremities of an airborne vehicle without risk of damaging flight controls or of producing sparking or voltages within the vehicle in excess of 500 volts. These requirements are based on a lightning current waveform of 200,000 amperes peak, a width of 5 to 10 microseconds at the 90-percent point, not less than 20 microseconds width at the 50-percent point, and a rate of rise of at least 100,000 amperes per microseconds (sic).”

The significance of the 500-volt number is explained in Reference 4, section 6.2.5, as follows: “Such a voltage did not present much of a hazard to the electromechanical and vacuum tube components in use when MIL-B-5087B was formulated.” It should be emphasized that the 500-volt number goes back to References 1 and 2 in 1949/1954, when relays and vacuum tubes were the building blocks of electronic circuits on aircraft.

The need to limit the structure potential drop to 500 volts is because aircraft at that time used structure not only for power current return but also for signal current return. In the 1940s and 1950s, even the most sensitive signals – those picked up by an antenna and conducted to a radio receiver on an unshielded (no coax) wire – might use structure return. Thus, any noise on structure is in series with the desired signal, as depicted conceptually in Figure 1.

Note that there is no need for any special bond provisions to structure in the circuit of Figure 1, other than that required to make the circuit function in and of itself. Imposing a class R bond does nothing to improve functionality under any circumstances of radiated susceptipility or ground plane noise, such as ground bounce or a lightning transient.

The practical application of the conceptual Figure 1 in the time period when References 1 and 2 were written and applicable is shown in Figures 2a and 2b (taken from Reference 5). These Figures show how noise couples into the receiver front end. Only in our case, it is lightning, whereas the Reference 5 discussion was about radio frequency interference. 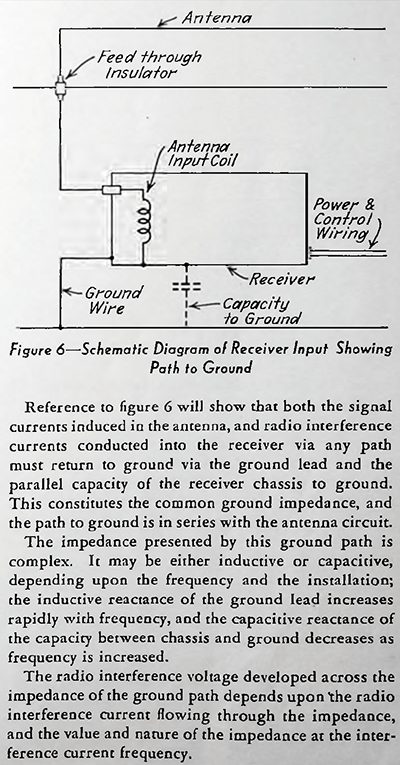 Figure 2a: Grounding excerpt from Reference 5 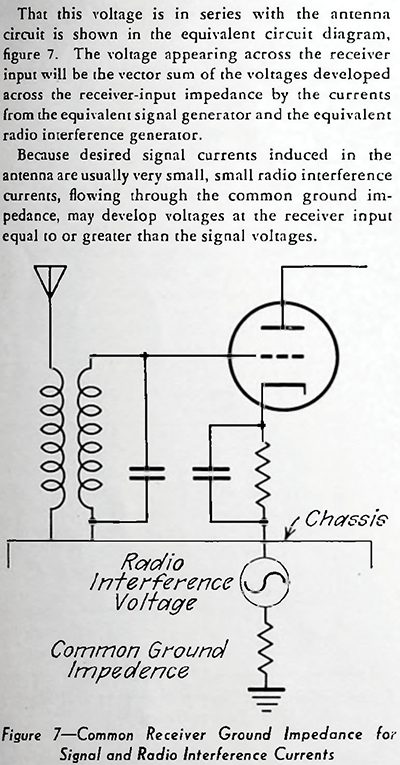 Figure 2b: GPI excerpt from Reference 5

We should note here that the lightning extremity-to-extremity resistance is precisely that – a resistance – not a single bond value. Figure 3 shows actual values for specific (unidentified and obsolete) aircraft. A comparison of resistance per unit length to total resistance is indicative of the degree to which the various models are “wide-body” or not. The larger the circumference, the more area there is over which the lightning current spreads (in a nose-to-tail strike) and the lower the resistance per unit length. The spread of lightning current over the entire circumference ensures no more than the 500 V criterion is encountered over any nose-to-tail path, and that all cables running fore and aft will see roughly the same end-to-end potential drop, no matter where along the periphery they are placed.

Figure 3: End-to-end resistance of some older aircraft
(Photo from https://aviation.stackexchange.com)

We should also note that the several sub-paragraphs under the lightning bonding sections in the first three references never mention the requirement of bonding an electronic equipment enclosure to structure. Instead, the subsections deal with how to achieve suitably low bonding resistances to protect the 500‑volt value, and to ensure lightning currents flow in the intended bond paths. It is of critical importance to understand that this was the only lightning protection design technique of importance to electronic equipment at the time. It is something that References 4 and 6 don’t adequately describe.

On this topic, References 4 and 6, section 5.5.1, say in part (the important part is italicized):

Both documents required tests of critical components, such as fuel tank skins, access panels, filler caps, antenna installations, and other “points of entry” on the aircraft. No attention was given to the effects of currents conducted through interior structures or systems, or to indirect effects of lightning on electrical and avionics systems. These latter effects were not well understood during this period.”

It is misleading to say, “These latter effects were not well understood during this period.” The only (indirect, resistive coupling) effect on a circuit using structure return was the transient ground potential, which the lightning resistance requirement limited to the target 500-volt potential. They understood what needed to be done, and they did it. The modern techniques of dedicated above ground returns and cable shielding discussed in the next section of this report were not in widespread use, and therefore there were no other indirect effects requiring control. It should be noted that class R bonding was specified, even though it would not have helped the types of circuits shown in Figures 1 and 2. There was some use of coax and EMI filtering. More on this in the next section.

Therefore, we can say that the (implied) 2.5 mΩ class L lightning requirement was the original lightning indirect effects requirement. There are plenty of other class L requirements in each of References 1 – 3 that control direct effects directly, especially fuel ignition.

Modern aluminum aircraft continue to use structure for power current return and 28-volt discretes, but not signals, and definitely not radio signals, which use coax. And NASA spacecraft – at least in the author’s personal experience – don’t use structure even for power current return. So, our situation isn’t as dire as portrayed in Reference 5, but we also no longer use robust vacuum tubes that can handle 500 volts for tens of microseconds. So, we have offsetting trends here. We have much more damage-susceptible circuits, solid-state replacing vacuum tube, but we also don’t place structural noise in series with the desired signal.

When using dedicated above ground signal returns, a lightning transient will couple a potential/current onto an entire cable harness. If that harness is shielded, only that potential that couples within due to shield transfer impedance will be seen to be in series with the signal.

So, the use of dedicated returns and shields places two ameliorating conditions at our disposal. The first is that the full lightning current isn’t induced across our signal return. The effect of this can be seen looking at Reference 7 CS1171 transient levels, as compared to the full threat aircraft strike of 200 kA. The very highest induced current is 2 kA.

If we compare Figure 4 to Figure 1, the same lightning attachment to the aircraft skin is present, and the same induced GPI. But that doesn’t matter as much anymore because the ground bounce is not directly in series with the above ground circuit. The ground bounce neither interferes with nor can damage the circuit components. A smaller current per Table VII from Reference 7 (Table 2) has coupled to the cable shield and induces a line-to-ground potential which is the cable drive current multiplied by the shield transfer impedance in series with shield termination impedances. As per Figures 5a and 5b, excerpted from References 9 and 10, shield transfer impedance in the lightning spectrum can be worst-case bounded by shield dc resistance, so milliohms per meter. It now becomes critical to control the shield termination impedance, which is comprised of two series impedances: 1) the shield through the connector to the equipment enclosure; and 2) from the equipment enclosure to structure.

Figure 4: Effect of lightning attachment current on an above-ground signal 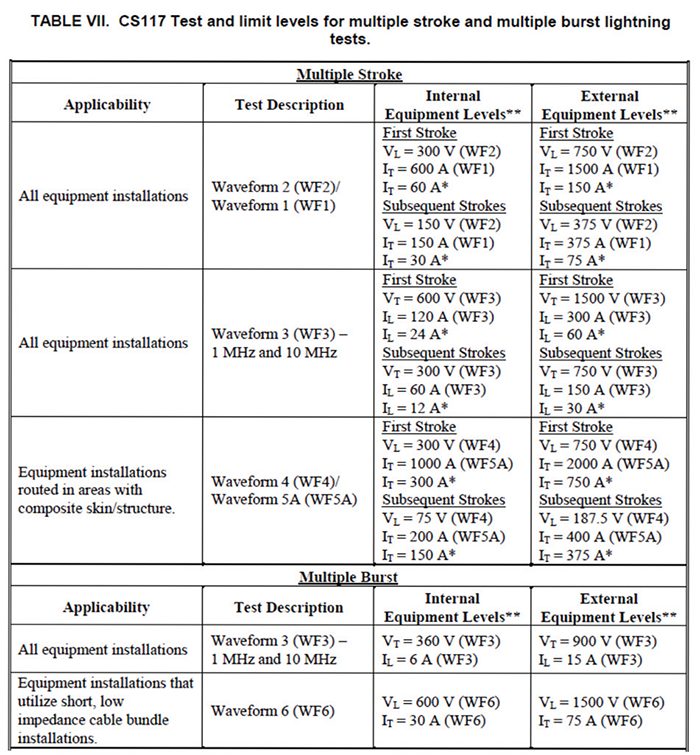 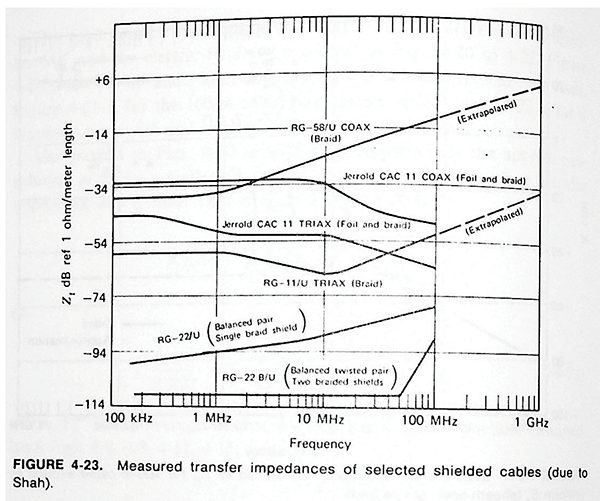 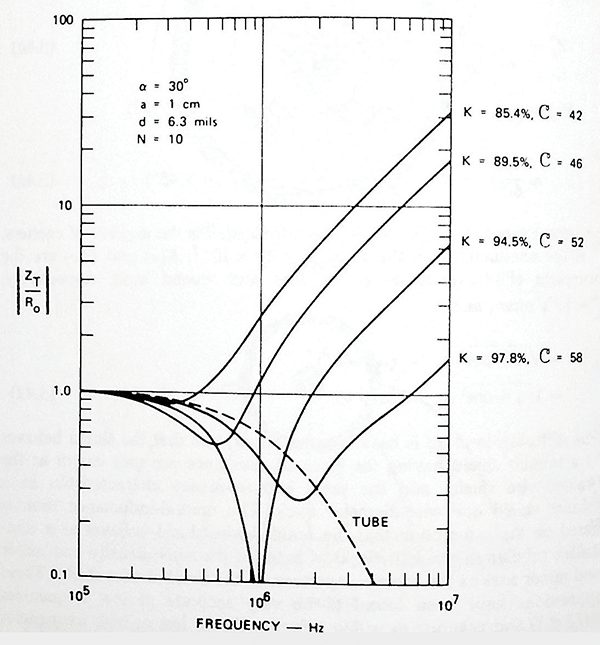 The actual effect of increasing the impedance versus the dc resistance is illustrated by a simple transfer impedance measurement.

In Figures 6a and 6b, the transfer impedance of the white 50 Ω coax was measured using its bnc connectors, and then inserting at the interrogated end a pair of bnc-to-banana adapters to simulate a shield pigtail termination. In this case, the dc resistance of the plug and jack adapters is at least as low as that of an equal length of braided shield. The difference measured is in the impedance of the termination. 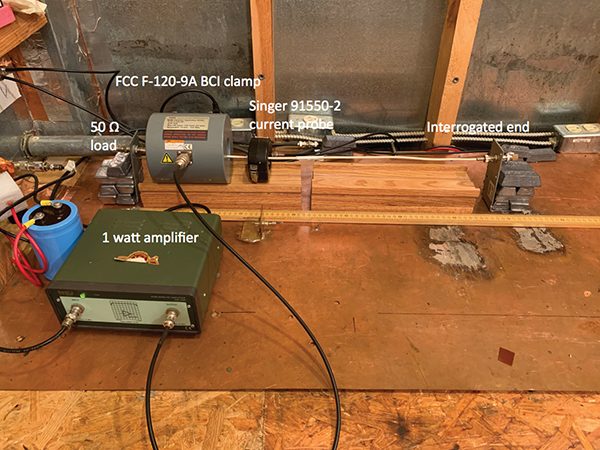 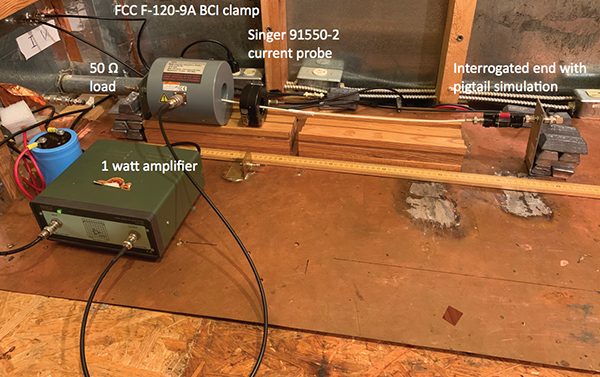 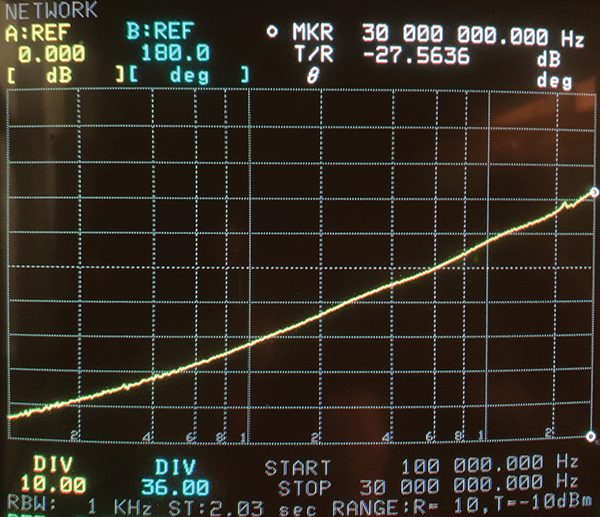 Figure 7a: Baseline transfer impedance test results for set-up in Figure 6a. Ordinate scale is transfer impedance in dB Ω. The network analyzer is taking the ratio of the coupled potential (T-input) to the induced shield current (R input). 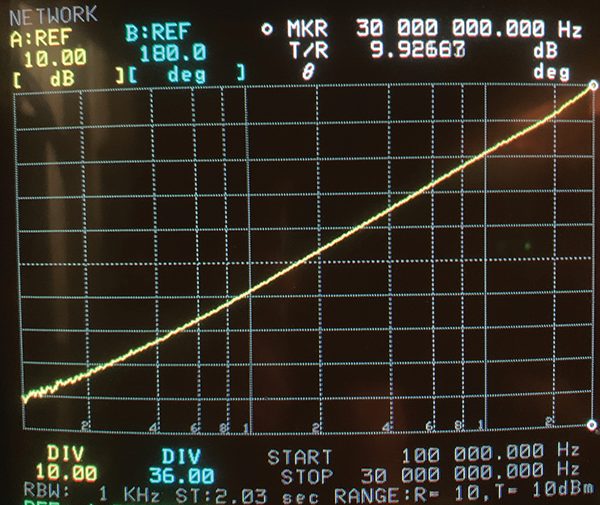 Figure 8 shows another common application that requires a class R bond: the use of filters with capacitive bypass to the equipment enclosure, and hence to structure. In order for the capacitor to be able to short noise currents to ground and provide an attractive path for said currents instead of the circuit component behind the filter, the capacitor plus all connections to structure must be very low impedance.

Well before Reference 1 was released, Reference 11 was recommending 2.5 mΩ bonds for communication electronics, and when using bond straps, ensuring a maximum 5:1 length-to-width ratio.

Because class R bonds are somewhat indiscriminately specified and used, it is worthwhile to quote exact wording for this requirement in References 1–3, as tabulated in Table 3.

Table 3: Tabulation of requirements in References 1-3

Several interesting facts may be gleaned from this tabular comparison of the three different revisions of MIL-B-5087: