Impact on Electronic Manufacturers in 2018 and Beyond

Latin America is one of the fastest growing regions in the world, with Brazil and Mexico rapidly progressing from emerging economies to developed countries. With a population of 630 plus million persons distributed over more than 35 countries, and with a GDP of 5,459 billion USD and a GDP per capita of 8,650 USD, Latin America remains a region of great challenges in terms of covering the economic and social needs of all of its people while facing daring times trying to accommodate the increasing demand for new and better products and services.

This demand, especially for technology and energy-related products, is creating an unresolved issue in terms of technology waste management. In 2017 the LATAM region generated 4.1 million tons of electric and electronic equipment waste representing 9.2% of global e-waste generation. [1]

This has prompted governments in Latin America to proactively look at regulating this sector since 2000, and today several countries have regulations regarding electrical and electronic equipment (EEE) and batteries, with more countries joining each year. It is expected that, by 2022, 80% of Latin countries will have implemented e-waste and battery collection programs covering at least 60% of each country’s territory. [2]

Manufacturers of electronic equipment and batteries need to carefully evaluate and plan their extended producer responsibility (ERP) programs, as they will have to be tailored to each country, keeping in mind the long run objective of running a single stewardship program based on the free movement of “resources” between countries.

As previously stated, electronic product consumption is creating 4.1 million tons of electronic waste in LATAM. The battery subcategory, consisting of primary and secondary batteries of domestic use, shows a similar pattern. In 2017 a total of 104,582 tons was generated, with Brazil, Mexico, Colombia, Argentina, Peru, Chile and Ecuador representing 80% of the total. [3] 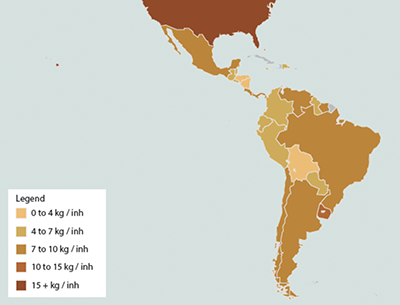 Figure 1: e-waste generation per capita and per country [4]
To understand the product recycling situation in Latin America, first we must look at what is happening with municipal solid waste (MSW). On average, 55.4% of the total MSW is disposed of adequately, meaning that generated waste is treated in a sanitary landfill or recovered through thermal processes. However, 44.6% of the solid waste goes to open-sky dumps, usually close to water streams or farming areas. [5]

Having high percentages of untreated MSW means that most of the cities in the region are not performing any source separation or segregation. Therefore, regular persons are neither accustomed to identifying the different waste streams nor to taking each waste stream to the appropriate collection bin, simply because in most cases such separated collection bins do not exist. In some cities, citizens are instructed to perform source segregation by using different colored plastic waste bags. But, at the end of the day, the waste collection truck picks up all bags at the same time and in the same container, essentially invalidating the intent and discouraging further segregation.

This situation causes poor performance among those few voluntary take-back & recycling (TB&R) programs for e-waste and batteries, and those very few mandatory product stewardship programs. On average, e-waste TB&R programs in LATAM region collect and treat less than 1% of the total waste generated.

Since the year 2000, main continental countries in Latin America started, very slowly, to regulate EEE and batteries in terms of their end-of-life (EoL) stage and their chemical substance compositions. It is necessary to note that, in most countries of this region, EEE and batteries are considered hazardous waste or special waste, requiring proper EoL management, transport, treatment and disposal. This hinders any development of product stewardship programs because of the tremendous increase in operational costs and liabilities. Another collateral result is that it is almost impossible to draw the line that separates waste from input or raw material for another production process. As result, closing the loop in an extended producer responsibility cycle is quite hard. This situation discourages local manufacturers and importers from engaging in voluntary TB&R programs.

Countries that realized this situation have started to pass mandatory regulations for EEE and batteries for the implementation of TB&R programs, considering these two waste streams and their sub-categories as special waste during the phases of initial collection, transport and intermediate storage. From general storage to recycling and/or
final disposal, EEE and batteries will be rendered as hazardous waste considering the collected volume and the nature and composition of the goods.

In addition, Argentina, Ecuador and Uruguay, among others, are developing mandatory e-waste and battery regulations that will activate sometime in 2018/19. Our estimations indicate that all continental countries in the LATAM region will have at least extended producer responsibility framework laws by 2022, and that 80% of Latin countries will have implemented e-waste and battery collection programs covering at least 60% of each country’s territory by 2025. [6]

There are no actual recycling capabilities for EEE and batteries in Latin America since take-back volumes are very low, with an average collection rate of less than 3%. [7] Recycling activities are focused on primary activities of manual dismantling, classification, storage and exportation of the valuable fraction (medium to high grade printed circuit boards) containing precious and rare metals for recovery to Europe, China and the United States. Low grade PCB and non-recyclable plastics are sent to safety landfills for final disposal, while ferrous and non-ferrous metals are marketed locally.

The same situation applies for secondary batteries (rechargeable) that are exported for lithium and cobalt recovery in Europe and the United States.

Installing proper sorting, dismantling and smelting technologies for metal recovery depends heavily on the existence of stewardship programs able to provide a sustainable volume of collected products, either EEE or batteries. Unfortunately, such programs are very few and mandatory regulation is new and insufficient. On top of that, almost all countries treat EEE and batteries as hazardous waste, making it difficult, if not impossible, to move waste/resources between them to consolidate volumes and supply the necessary input for a recycling facility. Most countries ban the importation of any kind of wastes, in particular those considered hazardous. The prohibition against importation of waste is actually codified in several national constitutional laws. Therefore, the only solution is to change the definition of the collected goods from “waste” to “resource” by harmonizing the tariff codes between countries and adapting an appropriate legal framework within each country.

To illustrate some challenges with an example, a minimum and steady volume of 1500 tons per year of used primary batteries is necessary to justify installing a zinc and manganese recovery plant in any one country in the Southern Cone of Latin America. Not a single country is able to provide such an input considering the current level of collection efficiency we have in the region. Collection efficiency in Colombia is the highest at 10% (approximately 450 tons in 2017), followed by Brazil with 2% (approximately 662 tons in 2017). But, for countries like Chile, Ecuador or Argentina, the expected initial collection efficiency will not be higher than 5% in the first five years, meaning that their respective contribution in volume will not be greater than 300 tons each per year. [8]

Quality of the Waste

From 2006 onwards, many countries started to control substances in many products of massive consumption, and batteries were one of the first EEE subcategories that were subjected to mandatory certification to limit the concentration of mercury, cadmium and lead and to assure product safety and performance consistent with the requirements of IEC 60086. Despite repeated attempts over the years, no country succeeded in enforcing chemical substances control for EEE, and somehow this issue fell out of the political and environmental agenda of the different governments of the region.

Primary batteries must undergo mandatory certification for heavy metals and safety and performance in Argentina, Brazil, Colombia, Ecuador (which includes secondary batteries as well), Peru and Paraguay. Mexico is expected to implement battery testing in 2018, and Chile through its recycling reform may also include battery testing in the future.

Despite the many obstacles and challenges, Latin America is moving steadily toward enforcing extended producer responsibility, making it mandatory for local manufacturers and importers to develop, implement and be financially responsible of their own product stewardship programs, either through individual or collective organizations.

There is a lot of social pressure to improve integral waste management, and all eyes are turned towards EEE and batteries as they are seen as a potential threat to the environment and to the users if handled improperly at their EoL.

Chile already fixed their Law 20920 enforcement calendar, marking 2019 as the year in which EEE waste and batteries will be regulated, having mid-2020 as the horizon for the enforcement of the law and the starting point for each product stewardship program.

Paraguay just published its new battery Law 5882 in 2017. The first semester of 2018 will be used to develop the regulatory decrees, with enforcement expected as early as 2019.

Brazil is moving forward with the implementation of sectorial agreements for the different EEE categories, with ABINEE [9] serving as the leading voice in negotiations with environmental agencies. It is expected that the first collective EEE Stewardship Program will begin operation during 2018.

Colombia has been running different mandatory stewardship programs for batteries, IT, and pesticides for over six years with varying degrees of success. Now they are in a stage of revising their programs since most of them are not financially efficient and can’t be sustainable in the long run. This is a very delicate situation and careful negotiations are presently on the table with the Ministry of Environment.

The coming five years will be quite challenging for electronic manufacturers operating in Latin America since the pressure for running EPR programs will be enormous. Implementing stewardship programs in big countries with long distances between cities, poor road infrastructure, low environmental consciousness (leading to low collection volumes) and high collection quotas will test industry resolution but will also foster creativity since it will require new and innovative solutions that address unique regional constraints.

Solutions must be tailored for each country, keeping in mind the long run objective of running a single stewardship program based on the free movement of “resources” between countries.

Hugo Alvarenga is a battery regulatory expert with ORBIS Compliance, and has over 18 years of experience in the battery industry developing battery and e-waste product stewardship programs in Latin America. Currently based in Buenos Aires, Hugo collaborates with the different environmental agencies in the region, providing technical support on the implementation of new regulatory frameworks and product stewardship programs, tailored to the unique aspects of each country. He can be reached at halvarenga@orbiscompliance.com.

Elizabeth Perrier, MTM, PMP, is CEO of ORBIS Compliance, LLC, a leading regulatory compliance firm providing complete regulatory solutions to manufacturers around the world in the telecom, safety, medical, battery and environmental industries. A native of Latin America and educated in Canada and the U.S., Perrier holds a Masters in Telecommunications Management and a Certification in Project Management. She is actively involved in regulatory compliance industry forums in the U.S. and abroad, participating in expert regulatory industry panels and in regulatory law proposals in the LATAM region. Perrier currently serves as Vice-Chair of the IEEE Santa Clara Product Safety Engineering Society, and as committee member of the IEEE ISPCE. She can be reached at eperrier@orbiscompliance.com. 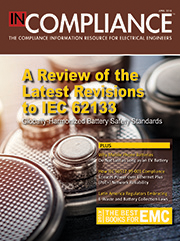