“Keep Out of Reach of Children” Symbol in Focus

Our last two columns in this series centered on ISO 7010, the ongoing safety symbol collection standard. We focused on how graphical symbols – including those used in product safety labels – are standardized for international use through the work of ISO Technical Committee 145 (ISO/TC 145), as well as the process the committee uses to approve new symbols. Now, we’re taking a close-up look at a specific new symbol’s development. This article includes behind-the-scenes insight straight from Geoffrey Peckham, the chairman of ISO/TC 145 (as well as the founder of Clarion Safety Systems and the original author of this ‘On Your Mark’ column).

ISO/TC 145 [1] is in the process of standardizing a new mandatory action symbol meant to communicate the message, “Keep out of reach of children.” See Figure 1. 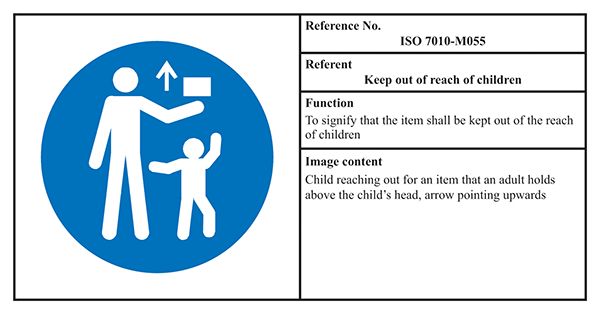 Figure 1: A snapshot of ISO’s draft amendment for the “Keep out of reach of children” symbol

“It’s difficult to say that one safety symbol is more important than another. Is a tsunami evacuation route sign more important than a lockout/tagout message meant to prevent electrocution? Both serve the crucial purpose of reducing risk and protecting lives. Having said that, from a personal point of view, this is the most important safety symbol I’ve had a hand in developing over the last thirty years,” says Peckham, who has chaired ISO/TC 145 for the past several years, and has been an expert representing the United States on the committee since 1995.

Though you may not use this specific message on your equipment, there are five practical lessons to be learned from its creation that can be applied to the development of warnings for your products.

Lesson #1: Define the Need for the Warning

When it comes to product safety, potential hazards must first be identified; only then can a determination be made as to whether those potential hazards should be designed out, guarded or warned about. Defining the need for a safety symbol begins with this process of hazard identification and risk assessment to determine if a form of safety communication is needed.

“I’ve had the privilege of being directly involved in the standardization of hundreds of graphical symbols over the years, yet I think this “Keep out of reach of children” symbol carried the most weight of responsibility for the ISO experts involved in its design,” says Peckham. “If creating such a symbol could be done, and done well, it could mean the difference between life and death for many children long into the future.”

As another indicator of need, two separate international product standards committees – each experiencing grave issues related to children interacting with their products – brought the need for this symbol to the attention of ISO/TC 145. In the battery industry, there was a risk of children swallowing cell batteries; in the cigarette lighter industry, there was a risk of fire and burns if children played with lighters.

One of the first actions to take when designing a new safety symbol is to use words to define the safety meaning or, to use the ISO term, the referent. Every symbol in ISO 7010 has a unique referent.

“The world’s expert symbol designers participating on ISO/TC 145 often argue at length about the words to use to describe a symbol’s referent. It’s not an easy task,” says Peckham.

For the battery industry, a symbol was needed to warn adults to keep cell batteries out of the reach of children; if swallowed, the battery could lodge in a child’s esophagus, causing traumatic injury or death.

“Many referents were considered but it came down to asking how best can the potential hazard be eliminated. For example, ‘do not swallow’ was rejected; using such a symbol on a product would likely not eliminate the hazard. The act of swallowing a cell battery can happen so quickly that it was felt that there is not enough time for an adult to watch their children and react to stop them from swallowing a battery.”

The lighter industry had originally used a symbol of a prohibition surround shape with a young child’s face to warn of the risk to children. See Figure 2. The meaning, though, was not completely clear. Does it mean “no children” or “not for children”? Is it meant to depict a very young child, and if so, is the intended message “do not give to young children”? In any case, the meaning of this symbol is not “Keep out of reach of children.” That brings us to the next lesson. 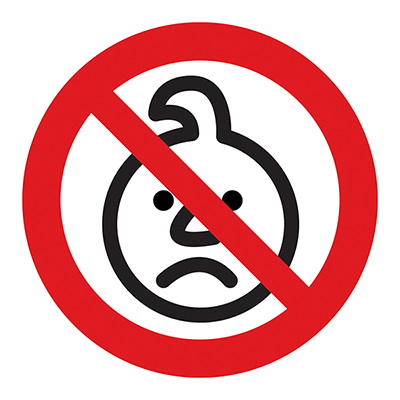 There are three categories of ISO safety symbols typically used in product safety labeling – warning, prohibition, and mandatory action – each with their own specific design criteria. See Figure 3. To use an existing ISO 7010 symbol, or to standardize a new one, you must decide which category fits your message.

Figure 3: The design criteria and examples of each of the three types of ISO 7010 symbols typically used in product safety labels

“This is why, according to ISO rules for referents, the lighter industry’s downcast child face symbol with a prohibition surround shape cannot be used to convey the mandatory action message of ‘Keep out of reach of children.’ This is a ‘DO an action’ message, not a ‘DO NOT’ message,” says Peckham.

Lesson #4: Consider the Scope of Use

While ISO/TC 145 was tackling the referent issue, it was approached by another group, the laundry soap industry, with a similar symbol request. Injuries of children swallowing colorful pod packages of detergent had been reported, and they wanted ISO/TC 145 to standardize a safety symbol.

“Here we had three industries all asking for a symbol that would convey the same type of message. Could we develop a single symbol to cover all of these products – and many other products? A basic premise of symbol standardization is that the more people see a symbol in the same or in different contexts, the more they’ll come to intuitively recognize its meaning. Thus, if possible, it’s more desirable to have a single symbol for a given meaning than many symbols for a wide range of similar meanings,” says Peckham. “Alternatively, it could be decided that having a different, more specific symbol is better for your on-product warning than a general symbol,” says Peckham.

In the same way, your safety messages may be unique to only one of your products, or they may be able to be applied to a variety of your industry’s products, depending on the potential hazard and the context. There’s no right or wrong answer; it’s a choice those responsible for the safety of a product have to weigh. In the end, the laundry industry made the decision to use a symbol on their packaging that showed a more detailed illustration of their message as it related to children swallowing detergent soap pods.

When it comes to effective safety communication, it’s important to use standardized symbols or, if you need to create a new symbol, to use ISO standardized illustration techniques.

The design of the “Keep out of reach of children” symbol included using the following design principles:

Another ISO design principle used in the new symbol was to make it as simple as possible. That typically means minimizing the complexity of symbol elements and making sure the line widths and shapes can be readily discerned at both the symbol’s smallest size of reproduction and its intended viewing distance.

“Regarding the distance factor, a viewing distance of arm’s length or closer was assumed for the majority of cases for this symbol, as an adult would be holding the product or its packaging. As for the size of reproduction, the cell battery industry intended to use it at very small sizes: it was going to be engraved on one side of a coin cell battery! Designing a symbol to be legible at very small sizes was key,” says Peckham.

Figure 4: The actual size of a coin cell battery at left, with the enlarged version at right

The lessons outlined here, based on ISO symbol development principles, can be applied to the crafting of your on-product warnings. While design decisions can be difficult, guidance contained in national and international standards can help.

“It would be disingenuous to say that designing graphical symbols and product warnings is an easy process. Defining ways to visually communicate critical safety messages is difficult. Yet this has been the objective of my company, Clarion Safety, and my life’s work: creating effective warnings that keep people from harm. Such a goal is worth the effort,” says Peckham.

This article is courtesy of Clarion Safety Systems ©2020. All rights reserved.