IoT, 5G, M2M and EMC: How We Gonna Play on the Internet of Things?

Last December I was asleep in an Orlando hotel room when my wife called me from Virginia: “Mike, are you messing with the heat again? I’m freezing here!”

“Sorry hon, I thought you were out tonight… I’ll fix it.” I rolled over and sheepishly tapped my phone, bumping the temperature up to her preferred level: Sauna. “Alrighty, that should do it.”

Seems I have raised the stakes in our 3 decades-long domestic war of the thermostat. Now, thanks to WiFi and the reach of the Internet, I can annoy my better half from thousands of miles away, anytime, any day—and it’s only going to get better (or worse, I guess).

According to statistics from the WiFi Alliance, 12 billion WiFi-enabled products have been deployed since the year 2000. Another 3 billion are expected to ship in 2016 alone, with device deployments doubling by 2020 (3 million every day).

This is connectivity on a massive scale. More and more of these WiFi-enabled products won’t handle or route human communications. The machines are talking to themselves.

The average home will host up to 16 devices that are either enabled or directly connected. In my home, counting PCs, a few TVs, an audio doo-dad and that infuriating thermostat, I count about eight WiFi things so I guess I’m a little behind the curve. My phone-to-thermostat illustrates a form of Machine-to–Machine (M2M) connection: pretty cool, but still a little crude and still involving a human. In the future, intervention will be unnecessary because the devices will anticipate our actions. Our phone will already know where we are and could inform our houses to turn off lights, turn down the heat and set alarms.

Our domiciles will learn our behaviors and anticipate our needs. “By better managing the lighting, temperature, smart appliances, security and entertainment systems, homes are going to be adapting to people.”1 So on any given Tuesday in the future, when we are heading home from work, the house will wake up, chill the Pinot Gris, put on the Perry Como and fire up the grill.

The Internet of Things

Presently, it is estimated that the total of internet-connected devices numbers around 25 billion, but just the overture in the Internet of Things (IoT) opera.

The IEEE’s description of IoT is: “A network of items—each embedded with sensors—which are connected to the Internet.”

The IEEE has an IoT initiative (portal: iot.ieee.org) and is positioning itself for fully embracing all of these technologies. Further, the IoT has given birth to other “Internets” including the Internet of Mobile Things, the Internet of Space, The Internet of People, the Internet of Cats and, somewhere out there I imagine someone is talking about the Mother of All Internets (that would be Al Gore’s mum, of course).

Even as it is developed and deployed, the definition of the IoT continues to morph. The essential aspect though, is connectivity, which implies that all these connected things will be, somehow, addressable.

One vision of IoT comes from a consortium called OASIS (the Organization for the Advancement of Structured Information Standards), which describes IoT as a “system where the Internet is connected to the physical world via ubiquitous sensors” where said sensors are in “every mobile, every auto, every door, every room, every part, on every parts list, every sensor in every device in every bed, chair or bracelet in every home, office, building or hospital room in every city and village on Earth.”2

That sounds a little freaky, frankly, but it means a couple of things: these distributed pieces of hardware will have to be really cheap; the sensors won’t have a lot of embedded processing; and communication standards will have to be open enough to spread development but tight enough to limit hacking and other attacks. In this vision, human behavior patterns will be learned, processed and stored on the Cloud where the algorithms can be done with more powerful computing resources.

“IoT is the Integration of the Physical and Digitals worlds,”3 according to Dr. Hamil Yanikömeroglu The term is not actually all that new, having been used at least as early as 1997, in a publication from the International Telecommunications Union.

“Eventually, it will be feasible to tag and track virtually every object on Earth. Anything from a medical instrument to a house key, from a cat to a human being, has the potential to become a node of the Internet.” [emphasis added]4 Objects, in this case, can be three-dimensional thing or a proxy for the thing. The point is there is a need to assign an identity to an object. There will be a heavy reliance on sensors of all types: attached to a chair, a printing press, an electric meter, vehicles or your raincoat.  This leads one to expand the notion to include the various “Internets of …” .

This is both a fascinating and frightening thing and it fosters the discussion of Big Data because networks will have an incredible knowledge of human interaction with their digital environment. And what will be done with all of these exabytes of human behavior data? Hmm, a question worth pondering.

The Internet of Things is about all things being connected all the time. Things, by the way, don’t have to be made up of actual molecules. Things can also be data or descriptions/representations of physical objects: meta-things, if you will. The notion is that the IoT in its broadest sense is a vast network with sub-networks, all interconnected in some way. It’s like the virtual version of the Six Degrees of Kevin Bacon at its most harmless—and the Borg at its most nefarious. Speaking of Mr. Bacon, I happen to be a single degree from the footloose dancer, if we’re sussing out human networks (but I won’t disclose in what way).

At the Federal level, the development of the IoT is affecting critical policy decisions, as outlined in the recent publication in the Federal Register of “Department of Commerce’s Digital Economy Agenda, the National Telecommunications and Information Administration. The NTIA (the government spectrum regulator, among other things) is requesting comment on the “benefits, challenges, and potential roles for the government in fostering the advancement of the Internet of Things (IoT).” Because of the global nature of the Internet, these discussions are carried out in various international forums as well.

Bring on Another G!

The IoT is also tightly connected with the notion of 5G or Fifth Generation mobile technologies, which is an emerging notion of what the communications space will look like after the current 4G. Mobile communications are already a marvel, advances in modulations have pushed the bits-per-Hertz performance to amazing densities (albeit under very ideal conditions and optimized ranges). The needs of the IoT space, heavily dependent on wireless deployment, will need the solutions that are hand-in-glove with the envisioned 5G landscape, notably tight pico-nets connected to bridge and big bandwidth backhaul links and intensive carrier database control to avoid interference and the necessity to coordinate frequency uses (and optimize reuse).

This turns us back to our initial attention to WiFi, which will be an integral part of implementing 5G, acting, in part, as an infill for the connective tissue of the integrated communication environment, illustrated in Figure 1. The figure shows how WiFi networks work within the cellular environment. This is not futuristic stuff; it’s already deployed and used by hundreds of millions of people who use the WeChat application on their phone.

An underpinning of IoT is the emergence of applications for Cyber-Physical Systems (CPS), which are the marriage of things with cyber networks, “where the physical systems and/or ‘objects’ are networked together in a highly distributed manner and connected virtually using computation and communication infrastructure provided by the Clouds and the Internet.”5

These connected devices may not necessarily be connected to the Internet, but must collaborate.

A connection to the Internet, in this case, may be some gateway or portal forming, sort-of, a first course of bricks in the IoT wall.

“Overall, from a networking or communication point of view, IoT targets a broader view of connecting objects in a global aspect whereas from an application point of view CPS targets the coordination of networked objects to achieve a specific goal.”6

Stated another way, IoT is the Internet of Everything, CPS is an intranet of a lot of things.

EMC in All of This

The following is just a partial list of technology sectors driving the rollout of IoT:

*Grandpa’s out wandering around again.

It is easy to argue that the discipline of EMC fits squarely within each of these various topics at a level of the applied practice of EMC and Signal Integrity (all this stuff has to be designed to function and tested for compatibility) to a level of the esoteric (interference avoidance in dense RF environments using adaptive antenna technologies) and human health (net effects of radiation exposure). The density of emitters will continue to increase.

To illustrate, note the profusion of WiFi networks in an urban Beijing coffee shop in Figure 2. 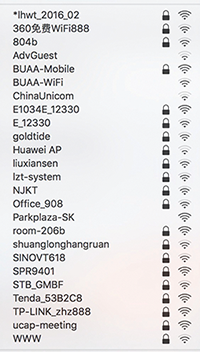 One can envision that the net profile of these networks is some kind of RF fog of a sort and, given the complex modulation schemes that continue to expand (IEEE 802.11ac and its 160 MHz of bandwidth, UWB systems, and carrier aggregation schemes in cellular systems), it’s not far-fetched to imagine an RF Climate Change of sorts occurring wherein global warming in the RF environment does something funny and unforeseen. Maybe it’s like the 1970s, but at-frequency.

To mitigate interference in high-density environments, analysis and propagation prediction, along with classical signal-to-interference prediction modeling, either on a room or facility scale or a campus/urban scale, will be necessary. There are some interesting prediction models available. One from Canadian company iBwave, can model facilities as large as sports stadiums to predict coverage and micro-cell overlap (ibwave.com).

Some of the applications of the Art of EMC fall into the following practice areas, not the least of most important is wireless communications, which has grown to be a fair-haired stepchild of the EMC family: 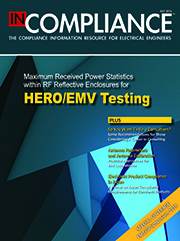