As medical devices go wireless, medical manufacturers face a new set of regulatory requirements and restraints. In addition to medical registration, wireless medical devices must receive radio spectrum approval. While the devices vary greatly, the wireless aspects are relatively uniform. That is to say, there are seemingly unlimited healthcare applications but only finite methods of sending data and, of course, limited RF spectrum. Thus, the wireless aspects of even a cutting edge medical device generally fall into familiar categories for international communications and radio spectrum authorities.

In my experience, international wireless compliance is often new territory for medical device manufacturers. Most countries, however, have had regulatory regimes in place for years and have well-established wireless regulations. Certain rules or restrictions may change, but the international process as a whole maintains fundamental characteristics and common pitfalls. Here are a few things to keep in mind before going global with a wireless medical (or any wireless) device.

A manufacturer should never assume commonalties between radio spectrum allocations across countries. Yes, commonalities exist, such as for certain ISM bands. However, one should always verify this and should also note the allowable output power. Many regulatory agencies publish frequency allocations on their website. Further, in some countries, certain RF technologies, such as ultra-wide band, may not be allowed at all.

Medical manufacturers often purchase wireless components, from WLAN modules to GPRS modems, from an external vendor. So a radio module may already be approved in a given country. This ‘modular’ approval might be sufficient for the entire medical device, or it could reduce the cost, in-country testing, or paperwork needed for the regulating communications agency. Many countries require a local representative or license holder for a wireless certification. Manufacturers who have gone through medical registration and distribution with local partners should try to use their existing in-country network to fulfill any local representative requirements.

In addition to the RF modules used in the device, medical products or systems may have supplemental components. Items such as power supplies, access points, or notebooks will likely need in-country certification. Medical manufacturers should speak with their vendors early and present them with a list of documents they will need. If, for example, a medical device works with a wireless access point, the AP vendor may need to provide block diagrams, authorizations forms, and even schematics. Presenting the vendor with this type of list at the last minute may cause delays, and it is best to know if the vendor is unwilling or unable to provide any necessary materials as early as possible.

Those who have dealt with medical registrations may already intuit the often bureaucratic process of product registrations. While it is important to have the good connections on the ground and an understanding of a country’s process, the lead-time for applicants is often fixed. Some countries, for example, require local testing at an approved lab before the application goes into review with the communications authority. Given this restraint, the applicant faces a minimum lead-time of several weeks. This is due to the time it takes to review documents, test the product, write the test report, and have the regulator review everything. Failing tests or having samples stuck in customs will, of course, cause unnecessary delays to the project. Knowing the common pitfalls and causes for delays in a given country will reduces the risk of falling behind schedule.

While the applicant should not be overly optimistic on the lead-time for approval, he should also be wary of lead-times that are too long. If the manufacturer is using a third party agent, that agent may want to ‘under-promise and over-deliver’. The agent may state the lead-time for RF registration is twelve weeks, knowing that it usually takes only nine weeks. A medical manufacturer, new to international wireless approvals, may then think the agent has come in ahead of schedule. In fact, such sandbagging doesn’t help the applicant plan his or her schedule. Therefore, one should err on the side of caution, as lead-times can vary depending on the regulators queue and other factors such as political unrest, natural disasters, etc. But, of course, the principal goal is having a realistic timeline for completion, as the whole team needs to know when they can enter a market. And medical manufacturers have the dual burden of dealing with two time lines for approval.

International wireless approvals add a new and independent dimension to the compliance picture for medical manufacturers. In the United States, for example, the FDA and FCC have issued a joint press release and the FDA has published recommendations relating to compliance. This suggests some overlap between the organizations on this issue. As In Compliance Magazine reported, the FCC has recently authorized the use of medical body area networks (MBANs) in the 23600-2400 MHz range. Medical manufacturers, however, will find that the communications authority ultimately dictates the parameters for use of a country’s RF spectrum. Indeed, the FDA has officially ‘suggested’ that medical devices using RF adhere to all FCC regulations. In a 2007 publication, the FDA recommended RF medical devices undergo safety, EMC, and wireless testing. This is for the purpose of better anticipating how the device will function in a medical environment and ensuring crucial data transmissions do not fail. While these are valid points, the FDA recommendations are requirements for the FCC. Internationally, one generally sees communications agencies function autonomously. Exemptions to a RF-related regulation on the grounds that a device is medical are rare. Thus the manufacturer enters another jurisdiction.

Employees of medical manufacturers who have dealt with the FDA and its international counterparts may not end up handling the international wireless approval projects for the same devices. This task could go to an EMC, safety, or RF engineer. As mentioned, existing in-country networks, formed from distributors or medical compliance partners, can benefit the wireless process. Yet, since the regulatory agencies function separately, the employee managing international wireless submittals may not need an understanding of the medical registration process as it exists in each country (assuming someone has that covered). As the use of wireless medical technology accelerates, we may see the regulatory landscape evolve throughout the world. For now, medical manufacturers will join the IT, telecommunications, and many other industries in facing the world of international wireless compliance. 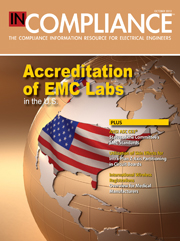