There is a product safety standard on the immediate horizon that will change the product compliance landscape in new and revolutionary ways. The standard will replace standards IEC 60950‑1, Information technology equipment ‑ Safety, and IEC 60065, Audio, video and similar electronic apparatus ‑ Safety requirements. Both of these standards are in widespread use and cover the majority of power‑based products. But as the boundaries between information technology equipment (ITE) and audio/video (AV) products became less distinct and, in many cases, even begin to merge, it has become increasingly evident that there is a need for a new standard that covers both these industries.

Until now, almost all the product safety standards considered scenarios such as electrical shock, heating, fire, marking, etc. Each product had its own specific standard. Most of these standards are product‑based and therefore when a new product was introduced, it was frequently outside the purview of the specific standard. Often, the standard must be revised or amended to meet the product’s requirements. Such changes can often be lengthy and expensive.

Traditional safety standards are “incident‑based.” An incident triggers the development of a new requirement. For example, fire incidents at the “Hall of Electricity” during the Chicago Columbian Exposition of 1893 triggered the development of better electrical insulation requirements and, incidentally, the founding of Underwriters Laboratories (UL). Virtually all of today’s product safety standards are incident‑based, where the incident is either real or the result of experimental probability. IEC 62368 is a “hazard‑based” standard; it is based on the energy sources within the equipment. If the energy source is Class 2 or 3, a safeguard must be interposed between the energy source and the body.

In 1995, the European Computer Manufacturers Association (EMCA) started work on IEC 62368 by creating ECMA 287. This new document drew on the principles of the hazard‑based standard engineering (HBSE), which established that the principle that safety was not dependent on the product but based on the energy within the equipment. HBSE can be divided into four main parts within the concept of IEC 62368‑1 (see Figure 1), as follows: 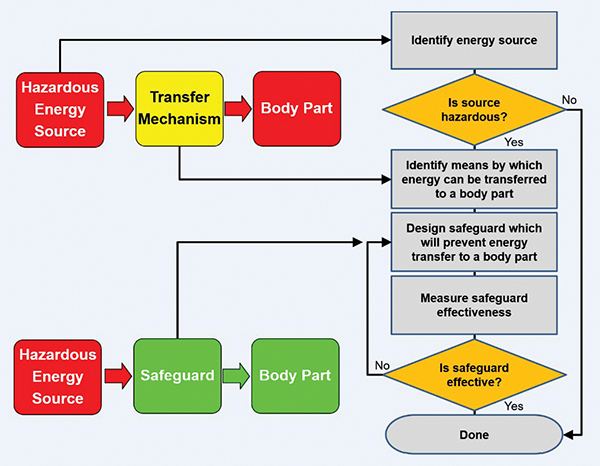 IEC 62368‑1, Audio/video, information, and communication technology equipment ‑ Part 1: Safety requirements, is not a product‑dependent standard. Because it is based on the energy sources within the product, it should be less susceptible to conflicts associated with the introduction of new technologies. It can generally absorb new technologies without requiring costly rewrites or amendments. Unlike the previous standards, it is based on the HBSE concept instead of incident‑based regulation. In addition to bringing the scope of IEC 60950‑1 and IEC 60065 standards under the same umbrella, the IEC 62368‑1 standard focuses on the energy within the equipment and gives manufacturers greater leeway in deciding how to design safeguards for their products.

However, it is important not to assume that IEC 62368‑1 is simply a merger of the IEC 60950‑1 and IEC 60065 standards. It should also not be interpreted as a risk‑based standard. IEC 62368‑1 is neither of these things. Instead, it takes a proactive approach by identifying hazardous energies and testing the effectiveness of their safeguards.

The scope of the standard is wide, and it covers all the products that were formally covered under IEC 60950‑1 and IEC 60065. Because the standard is not product‑dependent and is not prescriptive, it can, therefore, cover a larger group of products. Another important difference between IEC 62368‑1 and the other safety standards is that almost all the tests have been segregated into Annexes rather than placed in the body of the standard.

A point to consider when reviewing this standard is the new terminology that is employed. It is important to study and understand the intent of each word as it is used in the standard and how they differ from the lexicon used in previous standards. For example, the standard introduces the word “safeguard” to indicate the device or scheme that protects from a particular energy source.

Understanding the terminology of IEC 62368‑1 is paramount to understanding the safeguards and practices of its various regulations. For example, under IEC 60950‑1, the “user” is defined as “Operator” or “Service Personnel.” However, in IEC 62368‑1 the definition of “user” is more detailed and is categorized as “Ordinary person,” “Instructed person,” or “Skilled person.”  Similarly, in IEC 62368‑1, an “abnormal condition” is any non‑normal condition that is not the result of a component or part fault, such as a paper jam. The previous standards used the word “abnormal” to mean either abnormal or fault condition.

IEC 62368‑1 will, undoubtedly, generate many questions in the minds of the product safety engineers. Perhaps chief among those questions will be if the standard affects only the end products or if it covers the components as well. Fortunately, the answer to this question is very clear. IEC 62368‑1 covers all products, components, and sub‑assemblies that formerly came under the scope of IEC 60950‑1 and IEC 60065. It is important to understand that the standard also applies to a product’s components and subsystems, such as power supplies, hard drives, fans, etc. This must be distinctly understood to be certain of procuring acceptable parts throughout the transition period between now and when the standard becomes mandatory.

Just as in the past, it is important for component manufacturers, such as power supplies and fans and other related assemblies, to prepare themselves and their products to comply with IEC 62368‑1 as there will be no grandfathering period for anyone after December 2020. Initially, this meant that components and sub‑assemblies, such as power supplies and fans, should be certified to the new standard before the new standard takes effect. However, the provision in sub‑clause 4.1.1 of the new standard enables companies to continue using their inventory of 60950‑1 or 60065 parts in products certified to 62368‑1. The clause states:

“Components & subassemblies that comply with IEC 60950‑1 or IEC 60065 are acceptable as part of equipment covered by this standard without further evaluation other than to consider the appropriate use of the component or subassembly in the end‑product.”

Another persistent question is whether complying with the new standard will require redesigning previously certified products?  This depends on the product but, for the most part, the answer is no. Certain tests may have to be repeated if there is a lack of data, but a redesign is very rare.

The effective date of IEC 62368‑1 has been under discussion for some time by various committees and in various countries around the world, and the proposed effective date has changed numerous times as a result. In the end, however, representatives of both the U.S. and the European Union (EU) have agreed on an effective date of December 2020. On that date, IEC 60950‑1 and IEC 60065 standards will be formally withdrawn and products covered by the scope of IEC 62368‑1 will need to comply with the requirements of that standard. It must be noted that, in order to be able to ship products to the EU under the Low Voltage Directive 2014/35/EU, the product must bear the CE mark, signifying that the product satisfies all the requirements of the applicable Directives. Currently, the EU’s Official Journal shows date of cessation of December 2020 for EN 60065 and EN 60950-1. After that date, manufacturers must demonstrate either through self-declaration or through test report by third party labs that the product has met the requirements of 63368-1. Laboratories in the U.S. will still be able to issue CB Reports/Certificates to IEC 60950-1 beyond the December 2020 date, since not all countries will have adopted IEC 62368-1 by that date. However, UL will not issue any reports for new products against UL 60950-1 beyond this date. In North America, however, all Nationally Recognized Test Laboratories (NRTLs) have agreed that products currently certified to the previous standards can continue being produced and marketed as long as they incur no major changes that would require re‑testing.

Obligations to comply with the requirements of IEC 62368‑1 is a bit less clear in other countries around the world, as many countries have not yet adopted it. Korea and Japan have adopted the standard while other countries, including China and India, have not. This is critical for manufacturers who intend to export their products internationally since there will be instances in which a manufacturer will be required to certify their products to both the current standards and to IEC 62368‑1. This complication is likely to result in manufacturers incurring extra expenses and delays in releasing their products to market.

In October 2018, the International Electrotechnical Commission (IEC ) published Edition No. 3 of IEC 62368‑1, further merging the safety requirements for audio/video, information and communication technology equipment. IEC 62368‑1 Edition 3 differs from Edition 2 in a number of areas, as follows:

It appears that the acceptance of components such as power supplies that were previously certified under IEC 60950‑1 will also be allowed under the 3rd Edition of the standard. That means that, since all new submittals in North America must be done in accordance with UL/CSA 62368‑1 as of December 2020, existing component recognitions can be continued with just minor changes.

Currently the enforcement date for the 3rd Edition is to be determined. Also, as of December 2020, all new evaluations for IEC certification will be conducted in accordance with the requirements of IEC 62368‑1. One of the possible issues facing manufacturers who ship products globally after December 2020 is that if, for example, they have to have a CB report in order to sell their products into countries that have not adopted IEC 62368-1, they may be required to obtain a dual CB report. i.e., a CB report based on IEC 62368-1 to sell in Europe and other countries that have adopted the new standard, and another CB report for the same product based on IEC 60950-1 or IEC 60065 for regions that have not adopted IEC 62368-1. This means extra effort and extra cost for the manufacturers.

An important point to bear in mind is that, even if a component (for example, a power supply) is certified to IEC 60950‑1, testing laboratories will still be required to conduct tests on an end product consistent with the requirements of IEC 62368‑1. So components manufacturers should begin the process of qualifying their products to the requirements of the standard as soon as possible.

Table 1 reflects more of the key differences between IEC 60950‑1 and IEC 62368‑1. However, this table is only meant only as a general guideline and is not intended to be all‑inclusive. Therefore, we strongly recommend a thorough review of the full standard itself to avoid any surprises.

Every day, companies introduce more and more advanced and innovative products. They range from ubiquitous devices like smartphones to large appliances such as refrigerators, and more technologically advanced AV equipment. What was unimaginable a decade ago has become commonplace today. Who, for example, could have predicted that it would be possible to use our smartphones to communicate with the refrigerator in our kitchen or control the thermostat in our home from virtually anywhere in the world?

Technology innovations are everywhere, but they bring with them a potentially disturbing question:  is the safety of these products being adequately considered?  IEC 62368‑1 is intended to help provide answers to that question and may be the most potent tool available to ensure that the products we produce are safe to use. For manufacturers whose product life‑cycle extends beyond the end of 2020, work should begin now to prepare for the transition to the requirements of IEC 62368‑1.

The author would like to thank Mr. Richard Nute, an IEEE Life Fellow, and my mentor, for his constructive comments, support, and criticism of this article.

This article is updated with the most current information available as of 2/1/20.