During World War II the Department of Defense (DoD) purchased shielded enclosures to house their electrical/electronic equipment. They initially used steel wool to caulk the seams of the enclosures when they failed to comply with their shielding requirements. The steel wool rusted out almost immediately and the DoD turned to a company (Metal Textile) to obtain woven wire to caulk the leaky seams.

Metal Textile Company changed its name to Metex. Several employees of Metex company left and formed Tecknit. Thus the first 2 EMI Gasket Manufacturers were formed. Both companies used MIL-STD-285 to grade their products. This consisted of the following:

A reference level test was taken in free Space (outside an enclosure) for magnetic, E field and plane wave fields with the transmitting and receiving antennas 1 meter apart. Holes were cut in a shielded enclosure and a cover plate containing a gasket covered the hole (the hole varied in size between 4×4 and 12×12 inches). The transmitting antenna was placed inside the enclosure facing the gasketed core ½ meter from the wall of the enclosure. A receiving antenna was placed facing the gasketed cover ½ meter from the enclosure. With a secondary reading taken, the difference in the two readings was called the “shielding effectiveness” of the gasket under test.

In the late 1950s, Chomerics introduced the silver elastomeric gasket to the market place. The initial gaskets, when tested using the MIL-STD-285 test method, provided lower levels of shielding effectiveness than the wire mesh gaskets manufactured by Metex and Tecknit. Due to the silver content, they were much more expensive as well. To deliver a marketable product, Chomerics designed a new shielding effectiveness test method that produced much higher test results and showed their products to be superior (especially in the 1 to 10 GHz range.)

During the 1960s it became apparent that the MIL-STD-285 test method used by Metex and Tecknit did not provide accurate test results to the design engineering community. This resulted in two activities which were: 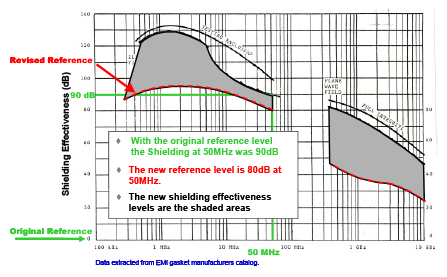 SAE, ARP-1173 testing was performed inside a large shielded enclosure. A shielded box (large enough to hold receiving antennas) was electronically bonded to a wall of the enclosure. The box contained a front cover plate equal to the dimensions of the box. Receiving antennas were placed inside the box. Transmitting antennas were aligned at the center of the cover 1 meter from the front of the box. The cover was attached to the box using non-conductive nylon screws. The references for the shielding effectiveness test were taken with the cover mounted to the box using nylon washers to provide a gap between the cover and the box. The nylon washers were then replaced with a gasket under test and a secondary test was taken. The difference in the reading was the “shielding effectiveness” of the gaskets. The second test documented by the ARP had the cover mounted directly to the box for the reference. A gasket under test was then placed under the cover. The difference in shielding the gasket provided was called the “improved shielding effectiveness” of the gasket. This test method has never been used by industry to test EMI gaskets due to the low level of shielding effectiveness the test method provided. 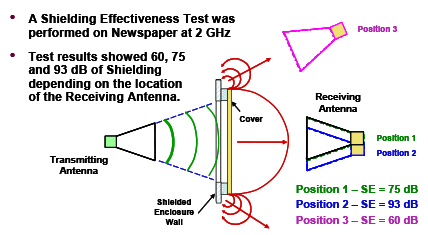 The relatively high level of Shielding effectiveness provided by the newspaper (60, 75 and 93 dB) was the result of the following:

In 1961 the DoD ignited a high altitude nuclear device 300 miles of the coast of the Hawaiian Islands. An electromagnetic wave (later classified as an EMP wave) caused extensive damage to the electrical grid and communication systems on the islands. The DoD turned to the finest minds in the academic and commercial electromagnetic theory fields to determine the cause of the destruction and to devise methods to prevent such destruction to their weapon systems. One of the results was the generation of SAE, ARP-1705 which was developed by the EMP design engineers and used to test the transfer impedance of EMI gaskets used to seal the seams of the shielded enclosure housing their weapon systems. The benefit of using transfer impedance testing is that an engineer can accurately predict the penetration of a gasketed joint by an electromagnetic wave using the transfer impedance data. (The ARP has recently been revised to test to 18 GHz.) The test method can also predict the effects corrosive environments have on any specific gasketed joint.