Highlights from the TCB Training: The Origins of SAR

The measurement of Specific Absorption Rate (SAR) is arguably the most complex of compliance issues, affecting thousands of new device models and billions of radio transmitters. The science and metrology of the measurements have evolved over the past forty years, tightly refined and scrutinized. To give some backdrop to this challenging issue, Dr. Quirino Balzano provided a fascinating overview on the essentials of our beloved SAR at the recent TCB Council training in Charm City. To the uninitiated, Specific Absorption Rate, or SAR as it is lovingly known, is a quantification of the local absorption of RF power in tissue. This notion was devised in the 1970s as handheld radios were first being widely deployed. The question is, how best to characterize it and measure it?

Let’s just put it out there: near-fields are just crazy, kind of like that former lover or next-door neighbor’s dog that will bark at its own shadow. Dr. Balzano notes that near-field energy is highly reactive and affects and is affected by the presence of material (human flesh, for example) in close proximity to an antenna. The mutual coupling drastically changes the radiation pattern and, hence, RF emissions. Prediction departs the scene. The classical models of an infinitesimally-small dipole are readily derived, however real-world effects skew the complexity rapidly. While models of this effect can be useful for gaining insight, the mathematics are complex and nuanced and should ultimately be validated by physical measurements.

The effects of near-field RF were first observed and investigations first carried-out in the 1970s. This was spurred by the deployment of Motorola MX radios to emergency response teams.

The limit for safe exposure, as set out in the first edition of ANSI C95.1 was , at that time, 10 mW/cm2. A diligent public safety inspector decided to do some near field measurements on the 6W radios and measured upwards of 160 mW/cm2—way above limit thought to be safe.

A new hire at the time, Dr. Balzano was tasked to investigate this issue amidst some close supervision as no one had fully examined this issue before. He found, doing measurements of the near field energy in a traditional way using a NARDA type of probe and “integrating” the power density around the radio, a net power of 100W. This result defies physics (how can you get 100W from a 6W radio?). The effect was dubbed “apparent power density.” Clearly this was something that needed to be sussed out.

The initial concept of SAR was introduced by Prof A.W. Guy of Washington University to quantify exposure of diathermy patients, using thermometers. To make these heating measurements, RF-transparent thermometers were necessary and had become available by 1976. Following this paradigm of RF heating of tissue, SAR was adopted by Motorola as a measure of local exposure.

At the time, head “phantoms” were developed to make the measurements using anthropomorphic models of the human head. (It was ‘interesting’ to learn how they managed to contain the simulated brain tissue inside the model using, er, stretchy latex things.)

The phenomenon of heating caused by RF goes to the fundamental structure of water. Water molecules have strong dipole moment and thus respond to an impinging E-field; the response varies with frequency. At around 10 GHz, the imaginary part of the dielectric constant peaks while the real part is decreasing rapidly ; a phenomenon known as dielectric dispersion occurs. Ultimately, as frequency increases (into the X-ray region), the molecules stretch, discard electrons and become ionized (well above the radio frequencies we deal with in compliance testing).

How, though, to quantify this heating? To derive a metric for thermal rise due to RF, it is necessary to determine how long a volume of water would have to be exposed to a field of a certain strength before each molecule of water would absorb one quantum,
or photon, of energy.

The example, given by Dr. Balzano, uses a cubic centimeter of water (equal in mass to one gram, by original definition). Using Avogadro’s number and some high school chemistry, the number of water molecules in one gram of water turns out to be 3.35×1022 molecules, give or take a few.

Because we’re interested in how many photons are needed to shake 3.35×1022 molecules, we’ll need to know what the photon flux will be at any instant.

Using 1 mW/cm2 of power density and invoking Planck’s constant, the photonic flux is found to be 1.5×1021 photons per second per square centimeter.

Given the rate of 1mW/g and grinding through a bit more math, it is calculated that it takes 1011 “wave transits” for every molecule to absorb one photon (assuming impossibly even absorption throughout the volume). This works out to be about 30 seconds at one milliwatt per gram. Naturally, the higher the power, the more photons and the less time it would take to shake each molecule at least once.

Ultimately, when cell phones were developed, new methods of measurement were necessary. Because of the lower power of mobiles (<1W, typically), temperature measurements were found to be unreliable and strict adoption of the methods developed for diathermy measurements could not be implemented. However the E-field could still be detected. This led Howard Bassen of the FDA to develop a small RF transparent E-field sensor (made of a quartz substrate, 2 mm dipole, diode and high resistance lines). Following soon, three orthogonal probes were developed by Motorola. And further improvements formed the basis for the development of precise methods of measurement that are used throughout the world to quantify how much RF power your brain absorbs when you’re on your mobile phone (turns out, not much).

For more information on the TCB Council, visit tcbcouncil.org.

Mike Violette is founder of Washington Laboratories and American Certification Body. Mike can be reached at mikev@ wll.com. 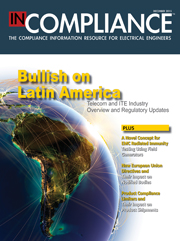