Clock signals from 1 to 100MHz are usually responsible for radiated EMC problems in HF/VHF range. Harmonics are the culprits, but think in current, not in voltage.

A  few years ago I was involved in troubleshooting an EMC radiated problem at 3 meters from a consumer application. From 30MHz to 1GHz, the radiated spectrum (Figure 1) included peaks separated by 10MHz. 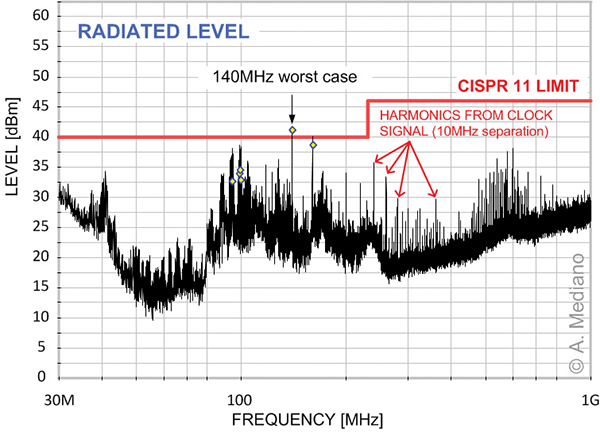 Figure 1: Radiated spectrum from the DUT

The frequency of 140MHz was the worst frequency when comparing with CISPR 11 limits and, because the wavelength for that frequency is around 2m, the hidden antenna was easily located in the power supply cable. A ferrite reduced the radiated level but this was a low cost product and no free space was available inside the enclosure so the ferrite was not considered as a final solution.

Because a 10MHz clock (50% duty) was inside the product, it was immediately assumed to be the origin of the radiation.

In a real signal, even harmonics appear basically if rise and fall times are nonzero and/or duty cycle is not 50%. In any way, even harmonics are lower in amplitude than odd harmonics. How is this possible?

I used a magnetic near field probe (NFP) around the PCB. The noise was found on top of the IC (very strong signal) and in every pin of the circuit, but especially higher amplitudes were found around the four traces used to supply 3.3V to the IC. Harmonics separated 10MHz including even values as the 140MHz signal of interest were found around the IC clock pins (Figure 3).

In Figure 4 three signals are measured with a high bandwidth scope: i) the clock signal, ii) the NFP output in time domain, and iii) the FFT of this output. 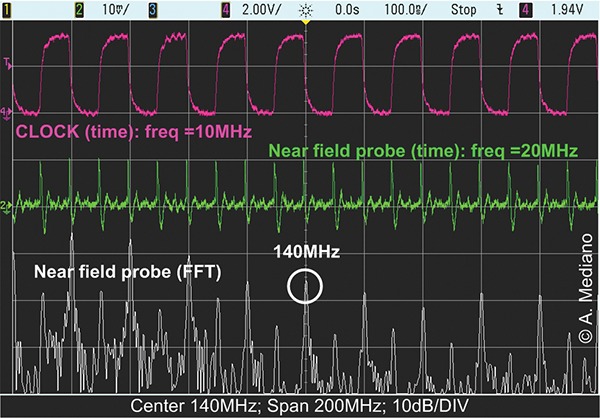 Center frequency for the FFT is in 140MHz. Note the VOLTAGE clock signal is 10MHz in frequency, but the NFP output (related with current consumption of the IC) is two times that of the clock (charge and discharge inside the IC): 20MHz. So, the culprit signal was not the voltage clock signal. The culprit was the current waveform related in frequency with the clock (2 times).

The decoupling of the IC was reviewed and optimized to reduce the transients of current in the PCB power supply lines.

My final advice: when troubleshooting EMI/EMC problems with periodic signals, be sure to measure both voltage and current. Usually problems are related with current.