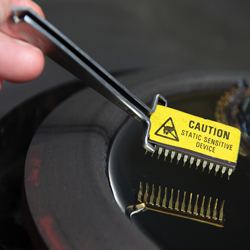 In Part Two of this series (“Principles of ESD Control – ESD Control Program Development”), we indicated that a key element in a successful static control program is the identification of those items (components, assemblies, and finished products) that are susceptible (ESD sensitive devices, ESDS) to ESD and to know the level of their sensitivity.

Susceptibility of an ESDS to an ESD event is determined by the device’s ability to dissipate or shunt the energy of the discharge or withstand the current and voltage levels involved. Although energy or (peak) current are the most important parameters, the ESD sensitivity or ESD susceptibility is typically classified by its withstand voltage. The withstand voltage is defined by the voltage which causes the discharge, not the voltage which can be measured at the ESDS. Part Two included:

Define the level of control needed in your environment. What is the most sensitive or ESD susceptible ESDS you are using and what is the classification of withstand voltage of the products that you are manufacturing and shipping? In order to have a complete picture of what is required, it is best to know the Human-Body Model (HBM) and Charged-Device Model (CDM) sensitivity levels for all devices that will be handled in the manufacturing environment. ANSI/ESD S20.20 defines control program requirements for items that are sensitive to 100 volts HBM.

Some devices may be more readily damaged by discharges occurring within automated equipment, while others may be more prone to damage from handling by personnel. In this Part Five we will cover the models and test procedures used to characterize, determine, and classify the sensitivity of components to ESD. Today, these test procedures are based on the two primary models of ESD events: Human Body Model (HBM) and Charged Device Model (CDM). The models used to perform component testing cannot replicate the full spectrum of all possible ESD events and there is no direct correlation between discharges in the field and in a test system. Nevertheless, these models have been proven to be successful in reproducing over 99% of all ESD field failure signatures and typically the ESD withstand voltages obtained by models in test systems are worst-case compared to real-world events with the same discharge voltage. With the use of standardized test procedures, the industry can:

The Human Body Model is the oldest and most commonly used model for classifying device sensitivity to ESD. The HBM testing model represents the discharge from the fingertip of a standing individual delivered to the device. It is modeled by a 100 pF capacitor which is charged by a high-voltage supply through a high-ohmic resistor (typically in the megohm regime) and then discharged through a switching component and a 1.5 kW (1,500 ohms) series resistor through the component to ground or to a lower potential. This model, which dates from the nineteenth century, was developed for investigating explosions of gas mixtures in mines. It was adopted by the military in MIL-STD-883 Method 3015, and is referenced in ANSI/ESDA-JEDEC JS-001: Electrostatic Discharge Sensitivity Testing – Human Body Model. This document replaces the previous ESDA and JEDEC methods, STM5.1-2007 and JESD22-A114F, respectively.  The simplified Human Body Model circuit without any parasitics from the test system is presented in Figure 1. 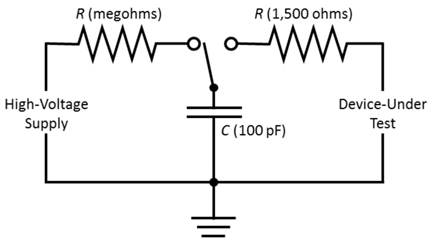 A typical HBM waveform has a rise time of 2–10 ns, a peak current of 0.67 amps/kilovolts and a double-exponential decay with a width of 200 ns. Typically, the decisive parameter which causes the failure is the energy of the HBM pulse.

Testing for HBM ESD susceptibility is typically performed using automated test systems. The device is placed in the test system and contacted through a relay matrix. One pin is contancted to the HBM network (“zap pin”), and one or several other pins are connected to tester ground (“ground pins”). With today’s high-pin count devices, a full test of all possible stress combinations is no longer possible, thus pin combinations have to be selected which guarantee a sufficient coverage to detect weak stress combinations. These pin combinations which have to be stressed are defined in the current HBM standard. Electrostatic discharges (ESD) are applied with a waveform generated by a Human Body Model network. A device is determined to have failed if it does not meet the datasheet parameters using parametric and functional testing.

One has to state clearly that the Human Body Model according to JS-001 addresses handling issues. Sometimes, the well-known IEC 61000-4-2 is also called “Human Body Model”, but that model addresses ESD events in a system under different operating conditions and, therefore, should be applied to systems only. The waveform and the severity of the IEC 61000-4-2 and the JS-001 cannot be compared. For handling issues, only JS-001 is meaningful.

The transfer of charge from an ESDS to a conductive surface at a lower potential is also an ESD event. A device may become charged, for example, from sliding down the part feeder in automated handling equipment. If it then contacts the insertion head or another conductive surface, which is at a lower potential, a rapid discharge may occur from the device to the conductive surface. This discharge event is known as the Charged Device Model (CDM) event and can be more damaging than the HBM for some devices. Although the duration of the discharge is very short – often less than one nanosecond – the peak current can reach several tens of amperes, causing significant voltage drops in the device and eventually resulting in breakdown of dielectrics (e.g. gate oxides) due to the excessive voltage.

The device testing standards for CDM (ESD STM5.3.1: Electrostatic Discharge Sensitivity Testing – Charged Device Model and JEDEC Standard JESD22-C101: “Field-Induced Charged-Device Model Test Method for Electrostatic-Discharge-Withstand Thresholds of Microelectronic Components”) were originally published in 1999 and 2000, respectively.  The test procedure involves placing the device on a field plate with its leads pointing up, then charging it and discharging the device. All pins are treated equally and are discharged after positive and negative charging. Figure 2 illustrates a typical CDM test circuit with direct charging o the device.  The CDM 5.3.1 ESDA document was last published in 2009. A joint JEDEC/ANSI/ESDA CDM standard (JS-002-2014) is about to be released. 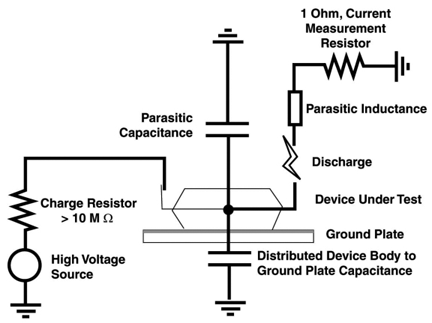 A discharge also can occur from a charged conductive object, such as a metallic tool, or an automatic equipment or fixture. Originating in Japan as the result of trying to create a worst-case HBM event, the model is known as the Machine Model. This ESD model consists of a 200 pF capacitor discharged directly into a component with no series DC resistor in the output circuitry. The discharge waveform can be oscillating, rise time and pulse width are similar to HBM. The Machine Model typically addresses the same physical failure mode as the Human Body Model, although at significantly lower levels.

Testing of devices for MM sensitivity using ESD Association standard ESD S5.2: Electrostatic Discharge Sensitivity Testing – Machine Model is similar in procedure to HBM testing. The basic test equipment and the stress combinations are the same, but the test head is very different. The MM version does not have a 1,500 ohm resistor, but otherwise the test board and the socket are often the same as for HBM testing. The series inductance, as shown in Figure 3, is the dominating parasitic element that shapes the oscillating machine model wave form. The series inductance is indirectly defined through the specification of various waveform parameters like peak currents, rise times and the period of the waveform. However, the inductance is not well defined. Hence, for different testers the MM withstand voltage might differ by at least a factor of 2–5, although both test systems comply with the current standard. The lack of reproducibility of test results and the fact that the well reproducible HBM addresses the same failure mode as HBM are the main reasons that the industry only rarely is using MM today. JEDEC and ESDA do not recommend to qualify products with Machine Model, but qualifying with HBM and CDM instead. The ANSI/ESDA MM 5.2 document was last published in 2013, however, with the arguments discussed in Industry Council White Paper 1, “A Case for Lowering Component Level HBM/MM ESD Specifications and Requirements,” the test procedure was reclassified from a Standard to a Standard Test Method. Machine Model testing of integrated circuits (ICs) should be limited to failure analysis without correlation of withstand voltages and charging in the field. 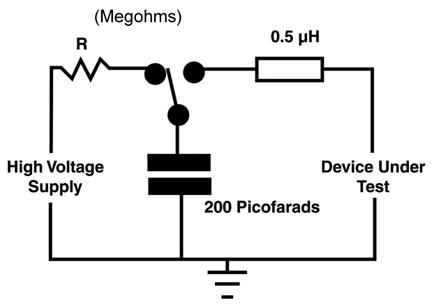 This model was originally intended to provide an efficient way to do CDM testing. The device is placed in a socket, charged from a high-voltage source and then discharged through the relay to ground. However, a correlation with the CDM standard cannot be guaranteed
and there was too great a dependency on the specific design of the SDM tester. Furthermore, today there is no commercial SDM test system available anymore. A Standard Practice (SP) document (SP), SDM-5.3.2, was first published in 2002, and republished in 2013.   A technical report, ESD TR5.3.2 (formerly TR08-00) Socket Device Model (SDM) Tester which discusses the pros and cons of SDM is also available from the ESD Association.

The current HBM and standards divide the Class 0 classification into two withstand voltage levels with class 0A being less than 125 volt sensitivity, and class 0B being 125 to less than
250 volts.

If handling class 0A items, or less than 125 volts, program improvements are called for. Basically, to control the environment to decrease the probability of ESD damage in class 0A situations, involves increasing ESD protective redundancies by adding EPA ESD control items and ensuring that they are working properly by increasing the frequency of compliance verifications of those ESD control items perhaps to more stringent required limits.

A component should be classified using both the Human Body Model, and the Charged Device Model. This would alert a potential user of the component to the need for a controlled environment, whether assembly and manufacturing operations are performed by human beings or automatic machinery.

Device failure models and device test methods define the ESD susceptibilty of the electronic devices and assemblies to be protected from the effects of ESD. With this key information, you can design more effective ESD control programs. However, do expect devices to become more susceptible. The ESD Association’s White Paper “Electrostatic Discharge (ESD) Technology Roadmap – Revised April 2010” includes “With devices becoming more sensitive through 2010-2015 and beyond, it is imperative that companies begin to scrutinize the ESD capabilities of their handling processes. Factory ESD control is expected to play an ever-increasing critical role as the industry is flooded with even more HBM (Human Body Model) and CDM (Charged Device Model) sensitive designs. For people handling ESD sensitive devices, personnel grounding systems must be designed to limit body voltages to less than 100 volts.”