From Electrostatics to ESD

I have often been asked, “What’s the difference between electrostatics and static electricity?” Well, I believe that if there is a difference, it’s mostly historical. A hundred years ago, it was all known only as electrostatics, a well-researched field that formed the basis for the teaching of electricity in general.

Electrostatics had its own system of units based on the mechanical units of centimeter, gram, and second, plus the electrostatic unit of charge (esu), defined as the charge that interacts with an equally large charge at a distance of 1 cm with a force of 1 dyne. It turns out that 1 esu equals about 3.3•10–10 C.

It’s a peculiarity with the electrostatic system that the unit for capacitance, esu per statvolt, turns out to be centimeter. I was reminded of this recently when a colleague asked me to identify a mysterious component marked 1000 cm. He was somewhat surprised when I told him it was a
1-nF capacitor.

Although electrostatics was an invaluable part of physics, if we are looking for specific applications or inventions based on electrostatic principles, we will not find much. There was a period in the middle of the eighteenth century when electrotherapy was in vogue. Semiparalyzed people were treated with discharges from Leyden jars, but the results of theses treatments were not beneficial. (Oh yes, there was also an electrostatic cigar lighter, but if you have seen a picture of that gadget, you’ll understand why it never caught on.) There was, however, one very important electrostatic invention: Ben Franklin’s lightning rod (see Figure 1). 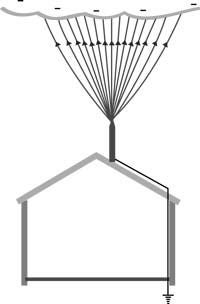 The simple construction of this device has changed little over the last 250 years, and it is still in use worldwide. The construction, however, may have certain nationally conditioned variations. For instance, until the 1970s in France, all lightning rods on public buildings, such as post offices and police stations, had tips covered with radium (226Ra). The idea was that the increased ionization around the tip would increase the neutralizing current to the base of a thundercloud. Although this was correct—at least in theory—the rods also produced a little extra radon (222Rn). Because the half-life of radium is about 1600 years, we must hope they had (and still have) a good system for disposing of old lightning rods.

But, with the notable exception of the lightning rod, it wasn’t until the beginning of the twentieth century that we found the first industrial application of electrostatics. In 1906, Frederick Cottrell invented the electrofilter or electrostatic precipitator (see Figure 2). The industrial revolution had started to put its black fingerprints on the environment, and the greatest polluters were the smelters and cement mills. The electrofilter was a genuine breakthrough because it trapped ash from coal-burning power plants. It is difficult to imagine what our pollution levels would be like today without this, in principle, very simple but ingenious electrostatic invention. 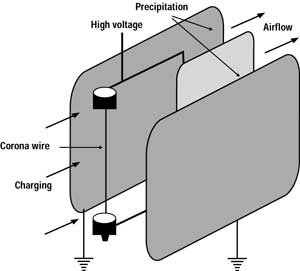 The precipitator was only the beginning. Soon after, methods were discovered for separating mixtures of widely different types of particles, followed shortly by methods for electrostatic spray painting and for producing dry coatings for the manufacture of grit cloth and sandpaper. All of these inventions were, in principle, very simple. That was not the case, however, with the work of Chester Carlson. With a degree in law and physics, Carlson worked in a patent office and, therefore, understood the need for copies of patent papers. So, he decided to invent a better copier. But when he chose, as a working principle, a combination of electrostatics and photoconductivity, nearly everyone agreed that this combination was never going to work. And everybody was almost right. After years of honing the experiments, however, the end result was the Xerox process, which has had a great impact on society. Still, all of these processes were known as electrostatics.

In the 1930s, explosions in grain silos were reported at a rate of approximately one per week in the midwestern United States. With this and with increasing explosions in hospital operating rooms and in chemical and pharmaceutical laboratories, people called the cause
of these explosions static electricity (see Figure 3). 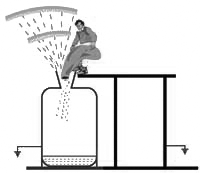 It was quite natural to suspect that an electrostatic discharge was the igniting source in such explosions. But in the 1950s and 1960s, a “new” type of explosion started to appear. Several serious accidents happened when oil tanks were being cleaned with a high-pressure water jet. Although an explosive vapor-air mixture might have originated from the hydrocarbon residue, the ignition source was still unknown. A detailed explanation is too long for this article, but the cause seemed to be a water slug moving in an inhomogeneous field. I’ve always loved static electricity for its simplicity!

Static electricity was—and still is—a lot more than just explosions. Already in the 1930s, static electricity was a nuisance in the printing industry as well as in the textile industry. Lengths of paper would stick together, and fibers would filter and be hard to control during spinning and weaving. Static electricity made the car radio crackle or caused a minor shock when you handed your nickel to the toll collector. It was these two problems more or less that led to the development in the 1930s of carbon-black-loaded conductive rubber.

With the development in the 1940s and 1950s of all kinds of polymeric materials—such as nylon, orlon, and Teflon—static electricity became a household word. People identified static electricity as the source for why clothing stuck to your body or the reason you got a nasty shock when you touched a water tap. And it was static electricity that made TV screens and monitors dirty. And, according to folklore, static electricity was blamed for headaches and for ruining the “balance between the good negative and the evil positive ions” in the atmosphere.

However, when the output of sensitive components showed a high percentage of failures and, even worse, when complicated circuits had latent breakdowns, some electronic physicists considered relations between charges in the nC-range and field strengths high enough to cause breakdown, such as that illustrated in the diagram for a human-body-model event (see Figure 4). 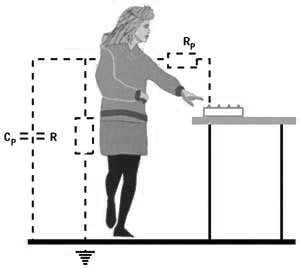 Such speculations, of course, didn’t do any harm as long as they remained speculations. But when engineers suggested preventive programs, management in electronics companies often balked because such an investment didn’t result in an immediate return. The physicists and engineers eventually prevailed, and it is now generally accepted that static electricity constitutes a group of problems to be taken very seriously in almost any branch of electronics.

For many people in the electronics industry, however, the field of static electricity was completely new. Like I’ve said before, “they Think They Invented It,” and since they considered it a new field, they needed a new name, and thus electrostatic discharge (ESD) was coined.