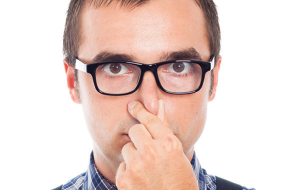 Olfactory nerves lie at the top of your nasal passages and their associated axons wind their way through holes in your skull to a spot just below the cerebellum. The business-end of these cells are covered with a thin layer of mucus and are exposed to volatile and non-volatile odors in the environment. Through a complex chemical binding of odorants with proteins in the proto-boogers, olfaction signals are transported via tuned receptors and travel to the most inner mass of your brain, where they are decoded. By an involuntary response, whether smelling trouble—or romance—your hea pivots upward to gather more of what’s in the air: danger, delight, disgust or, sometimes, disappointment.

Amazingly keen, the whole smell system—when it’s working correctly—can sense and discriminate concentrations of substances down to a few parts per million in an air awash with complex organic and inorganic molecules. A single smell can affect the smeller’s response, associating scents with causes and events. (For the engineers of the unwashed variety that I have met on occasion, their own, er, natural miasma, may interfere with this function. It’s no wonder we are a dateless bunch.)

Having a keen sense of smell is only the physical manifestation of connecting-the-dots, so to say, in the world of real engineering. In the non-physical sense we learn to discern what we’re measuring, examining or observing can pass the Sniff Test.

A great deal of attention has been and is paid to the human sense of smell, one of the first senses to imprint on us from birth, and most strongly connected with our earliest memories. A defenseless infant quickly learns its mother’s scent. The study of smell can be traced to the first century BC: Lucretius posited that different smells had atoms with different sizes and shapes. Naturally, the notion of atom was not our modern-but-evolving quantum mechanical view, but the idea is not too far off from what we understand about the nature of proteins binding on sense receptors. Remarkably and uniquely, the olfactory system relies on stem cell turnover.1

Smells and their association that embed in the permanent parking lot of the brain, now electro-chemical in nature, must first pass through the hippocampus to be stored in long-term memory. (We examined learning and memory mechanisms in Training the Engineering Brain in January 2013 of this periodical.2)

Other senses—sight, sound, taste (largely driven by olfaction) and touch—contribute their own piece and an emotional coupling reinforces the link from an odorant to a place in time and space. The smell of cut grass, the whiff of a campfire, the aroma of cinnamon, a waft from a dank basement—all can trigger memory sensations in humans. For me, walking through old wooden houses and smelling the fermented air and resinous framing triggers memories of explorations of my aunt’s mysterious attic, crammed with family relics and piles of long-forgotten toys, dusty discarded clothes and leaning stacks of hardback books. A walk on a rainy steaming late summer day in any given city can trigger Taipei: a little sweet, a little sweaty.

We can associate strong memories with complex odors; the powers of discrimination are wondrous. According to the Fifth Sense “Humans possess around 12 million olfactory receptor cells that can detect approximately 10,000 odours”—nothing to sniff at—allowing us to sort oregano and oranges. “Flavor experts,” those with intrinsically more sensitive and discerning palates craft custom drinks and tasty custom beverages. (http://flavorman.com/about-us/)

Lest our human hubris make us feel superior in the animal kingdom, however, consider canines’ capabilities. Some breeds have up to 300 million receptors and can detect 40,000 different odors!3 The long nose—packed with olfactory receptors—knows. The only being that I know that has a more sensitive nose than a bloodhound is my wife, who can detect the smell of a smoke I had stubbed out two hours before. I wander in the room, and with just one whiff: “Did you have a cigarette???”

A Nose for Data

Most of our community probably recall their first whiff of that distinctive electrical smell when the POP! of an over-stressed tantalum capacitor or the CRACK! of an overheated FET erupted an acrid smoke. (My first experience of a self-inflicted electrical smell occurred at the tender age of eight: I tried to pry a stuck electrical plug out of an AC outlet with a quarter. Impressive were the two gouged molten edges along the serrated edge of the coin, O2 turning into a trace amount of O3) The Washington DC Metro elicits a memory of this: the energized third rail (at ~400V) is prone to occasional arcing and sparking as well.

After doing this compliance stuff for a while, one develops a sense of smell of another variety.

Having a nose for data is an acquired skill and we rely on the sniff test as part of a data-collecting activity. This acuity is garnered after hours of staring at the spectrum analyzer screen and plots of time and frequency domain data.

In reviewing measurement results, the question becomes: Does it pass the sniff test?

This skill also accrues to a savvy designer—practiced in reading schema, learning what works (and what doesn’t), who can assess the probable outcome after a quick glance at a product or project and can tell when something doesn’t smell right.

Although we are born with the capability to process chemicals in the olfactory, we must develop a sense of smell. Problems may arise when that sense is overwhelmed, ignored or starts to fail. It can sometimes be fatal.

A Whiff of Danger

Air France flight 447 pancaked into the Atlantic Ocean on June 1, 2009 shortly after 2 a.m. UTC. Two hundred and twenty eight passengers and crew perished instantly (it is presumed, given the plane’s vertical speed). Upon impact, the aircraft was performing perfectly (at least according to its design). The last set of data indicated that the plane “was flying due west with its nose 16 degrees up and its wings nearly level; thoroughly stalled, it was progressing at merely 107 knots, but its descent rate, despite full thrust, of 11,000 feet per minute. The impact was shattering.”4

The plane, a nearly-new wide-bodied Airbus A330 with advanced avionics alarms, autopilot and every imaginable system designed to avoid human error, sank into deep water in the Intertropical Convergence Zone. Some wreckage and bodies were found quickly. After nearly a two-year search, the aircraft’s flight data recorders were found in 13,000 feet of water (remarkable). Hours of inquiry and analysis of voice cockpit recordings and aircraft sensor data painted a picture of the last moments of the doomed plane and conclusions about the cause of the crash.

The flight took off and progressed normally for four hours with manageable weather along the flight path. The crew, with nearly twenty thousands of hours of flight time between them, apparently over-corrected when the pitot tubes—the forward portion of the pitot-static system that provide relative airspeed indication to the cockpit—froze over during a passage through an interlude of icing at 35,000 feet. With the erroneous airspeed inputs to the flight computers, the flight control system switched to alternate law 2, a mode that, among other things, disengaged the auto-pilot. Under control of the Pilot-Flying, the plane climbed to its maximum altitude of 38,000 feet and stalled. At some moments during the crisis in the cockpit, the nose of the aircraft was pitched up to forty degrees, an amazing attitude and well above the stall-angle.

What happened between the time of the initial airspeed errors and impact with the Atlantic is a fascinating, if tragic, read. It took just four minutes for Flight 447 to pass from straight and level flight to plummet seven miles into the water. The crux of the issue appears that the pilots swirled around in a spiral of confusion in the four minutes between the first erroneous inputs and the airplane’s final moment. Errors in airspeed reporting overwhelmed the otherwise very experienced pilots.

Modern aircraft fly themselves after initial climb-out to near-final approach, but fewer and fewer pilots spend much time at the controls, apparently, and “It seems we are locked into a spiral in which poor human performance begets automation, which worsens human performance which begets increasing automation.” It also seems that the increasing reliance on automation makes us lose our sense of smell.

It was not just the incorrect readings, however, that doomed Air France 447. Examination and inquiry pointed to several modes of fatal failure in “one of the most foolproof airplanes ever built.” According to some analysis, some of the blame pointed to the lack of following protocol by the crew and a hierarchical culture that stifled critical communications. Part of the blame was assigned to faults in the human-machine interface and some, perhaps, due to the crew relying on instruments and not on their noses.

This is indicated in the lab, too, where automated measuring equipment decouple the engineer from the physical quantity: Press Button, Get Result. One should always ask: Does what I’m looking at smell right? If not, have another look, run another test, check the cable, the calibration, the settings. Sometimes, losing your sense of smell, or ignoring it, can lead to big problems.

The End, by The Nose

Recent research connects our sense of smell to our own mortality.

This is indicated by findings from the University of Chicago, which conducted a study of the smelling capability of 3000 middle-aged and older subjects. They were asked to assess and discern the differences between various odors.5 The researchers “hypothesized that olfactory dysfunction could be an early integrative indicator of impending death.”

Basically, the study found that deterioration in the olfactory was a strong predictor of mortality in the next five years.

A physical sniff test, using real smells, can be administered to see if one’s olfactory is functioning correctly. This study gave a smell test (and yes, there are standard smell test kits) to the study’s participants. This test consisted of administering a set of smells to the subjects asking two basic questions: 1) can you smell it? 2) what does it smell like?

Subjects with low smell recognition/ability are deemed anosmic. Hyposmia is normal to above-average smell capability. After bench-lining the participants, the researchers followed up five years after the study to determine the fate of those who were attached to all of those noses.

After adjusting the data for age and gender, it was found that anosmia accounted for a higher indicator of mortality within five years than heart disease, stroke, diabetes, heart attack and cancer. The loss of sense of smell was the highest predictor (not necessarily the cause) of all major diseases! The researchers’ conclusion points out that “believe olfaction is the canary in the coal mine of human health, not that its decline directly causes death.” If you find yourself running around asking “what’s that smell?” you may just have a nice long life.

It is important to develop a keen sense of smell: it first aids us in survival and it can steer us away from problems. But it may be fatal if it fails you or you fail it. By any measure, it is often best to follow your nose. 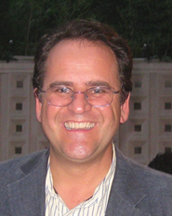 Mike Violette is President of Washington Labs and Director of American Certification Body. He loves the smell of small-batch bourbons. He can be reached at mikev@wll.com. 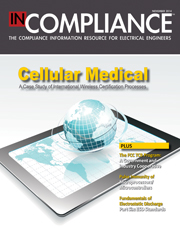