As we apply the flame to the bottom of the plastic sheet, the flame will burn the underside of the plastic. The burn will propagate radially outward from the Bunsen burner along the horizontal surface. But this is not an efficient burn because the heat is spread over a great area. The heat drops off rapidly with horizontal distance from the initiating flame. The resultant burning of the flame-retardant plastic is not significant. It largely behaves as if it was nonflammable.

However, in this configuration, the plastic immediately above the flame softens and it loses its structural strength. Ultimately, the plastic will cave in, yielding a large opening. At this time, the Bunsen burner flame passes through the opening and is available to ignite any other nearby material. The flame-retardant material continues to melt and the hole opens until the material is far enough from the flame that the heat of the flame is no longer sufficient to cause the material to soften.

Now imagine a large vertically-oriented thick sheet of flame-retardant plastic. We will apply the Bunsen burner flame to the vertical side of the plastic sheet (but not to the bottom edge or side). As we apply the flame to the side of the plastic sheet, the flame will burn along the vertical surface. All of the heat is in a vertical column along the sheet. Flames will now appear from the plastic itself, and will increase the height of the burned area. We actually get more flame, but in a narrow column.

Since the heat is concentrated in a vertical column, the material retains its structural strength. As the fire continues, the fuel burns away from the heated column, and is gradually consumed. Eventually, all the material within the heat column of the Bunsen burner is consumed. The fire does not spread.

Fortunately, these are reasonable presumptions for electrically-caused fire. Many electronic heat sources are of short duration. This is because, often, the device which is the source of the heat fails in a short time in such a way that heat is no longer generated. Likewise, electronic heat sources usually don’t move as the fire progresses. Usually, the heat source is a component which remains in place throughout the event.

In the case of the horizontal sheet, a hole opens which allows the flame to escape from the equipment. In the case of the vertical sheet, the structural integrity is maintained for a much longer period of time. Flame-retardant plastic material is not a panacea against all fires.

Let’s repeat the same experiments with a thick sheet of non-flame-retardant plastic material.

As we apply the flame to the bottom side of the plastic sheet, the flame will burn the underside of the plastic. The plastic will burn along the horizontal surface. In this case, the plastic will ignite and burn along the surface. The flame is small because the burning along a horizontal surface spreads the heat and the combustion products tend to displace the oxygen. However, the fire does spread. As it spreads, it rapidly heats much of the sheet. The entire sheet is heated by the flames on the underside. There is no local heating as in the case of flame-retardant plastic. Because a large area is heated, the large area begins to lose structural strength. The large heated area of the plastic sheet sags.

At this point we have a race as to whether the plastic will sag sufficiently to smother the flames or whether it will produce a hole. If a hole is produced, it will be much later in the fire than the hole in the flame-retardant material. Even if it sags and extinguishes the Bunsen burner, the edges of the sheet are ignited and will continue to burn until the fuel (plastic) is totally consumed.

Now imagine a large vertically-oriented thick sheet of non-flame-retardant plastic. We will apply the Bunsen burner flame to the vertical side of the plastic sheet (but not to the bottom edge or side). As we apply the flame to the side (but not to an edge), the flame will burn along the vertical surface. All of the heat is in a vertical column along the sheet. Flames will now appear from the plastic itself, and will propagate in a vertical column. If we apply the flame for a long enough period of time, the plastic material may ignite and burn of its own accord without the additional heat of the Bunsen burner. This is a function of the thickness of the material. If the plastic is thick enough, it may not continue to burn because the heat is spread throughout the column and because the thick material tends to provide a heat-sink which keeps the temperature down.

A thick vertical section of HB-rated material will often pass the UL 746C 3/4-inch flame test and sometimes pass the 5-inch flame test. A thin vertical section will not likely pass either test. As a general rule, most safety standards include constructional requirements intended to contain a fire within the equipment. These fire containment requirements address types and thicknesses of material and sizes and locations of openings.

Fundamentally, there are four ways of dealing with a fire in electronic products: (1) Contain the fire until it bums itself out (consumes all available fuel). (2) Provide no fuel for the fire. (3) Smother (control the oxygen for) the fire. (4) Automatically extinguish the fire.

(1) Fire containment is really tough. You’ve got to use a material that won’t be destroyed by the fire for the duration of the fire. Plastics, whether flame-retardant or not, can only contain very short duration fires. In addition, top and side openings, if not really tiny and the material really thick, will allow flames to escape the equipment. So, the constructional requirements are not very effective at containing a fire.

Smothering a fire means that the fire has a decreasing oxygen supply such that its rate of combustion decreases until it is extinguished. Almost any fire can be oxygen-regulated. Oxygen regulation can be accomplished with an inverted container without holes (e.g., an inverted coffee can or paper cup). If the mouth of the container is not much larger than the fire, and if the container bottom edge is below the base of the flame, then the fire will be oxygen-regulated.

The rate of combustion can be controlled by the size of the opening and the distance below the base of the flame. A paper cup can extinguish a candle flame before the flame can heat the paper to ignition temperature! Oxygen regulation is a very effective means of controlling the rate of combustion and extinguishment of a fuel. The drawback is that an oxygen regulating construction also constricts heat flow for cooling the electronics under normal operation.

The best solution to fire — any fire — is to prevent fire in the first place. I’ll discuss how this can be done in a future issue.

Some of the material presented here is the result of a collaboration of Dave Adams, Ray Corson, Kevin Cyrus, Richard Pescatore, and Brady Turner, all of Hewlett-Packard, and Bob Davidson and Don Mader of Underwriters Laboratories. 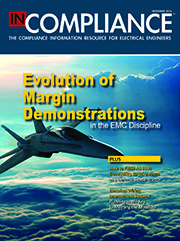