Ferrites to Kill Ringing or Not?

Sometimes a ferrite is used to remove ringing in some applications as in power electronics or digital circuits. Did you know that ferrites can create that unwanted ringing if selected in a wrong way? 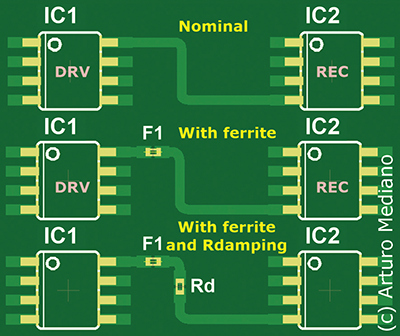 Figure 1: Original clock signal from IC1 to IC2 (top), with a ferrite
in series (middle), and with ferrite and damping resistor (bottom).

Then, someone recommends you add a small ferrite bead in series with the clock signal, shown in Figure 1 (middle).

The reason for that recommendation could be well reasoned or because of other unknown and historical reasons:

And note that, many times, the ferrite is selected from a kit in a very fast and “blind” way.

To your surprise, in any of those cases, the digital clock can appear in your scope with big ringing, shown in Figure 2 (left) when the ferrite is in place compared with a case without a ferrite. How is this possible? Ferrites kill ringing! Or not always?

Figure 2: Nominal clock signal and effect of series ferrite (left). Ringing is damped with an additional series resistor (I do not like this solution).

Of course you must be sure that the ringing is not because your measurement setup (e.g. pigtail in your probe). Take care about this.

Note how rise time is degraded with this solution. In my opinion, this solution is not very good. You are using a ferrite to include resistive losses in high frequency and then you add more resistive effect in series for low, medium, and high frequencies so signal degradation is for sure. Can we avoid the ringing in other way?

To understand what is going wrong here let me analyze the ferrite we are using in our example. In Figure 3 (left), we have included the impedance versus frequency behavior of the ferrite used in previous examples (ferrite 1). 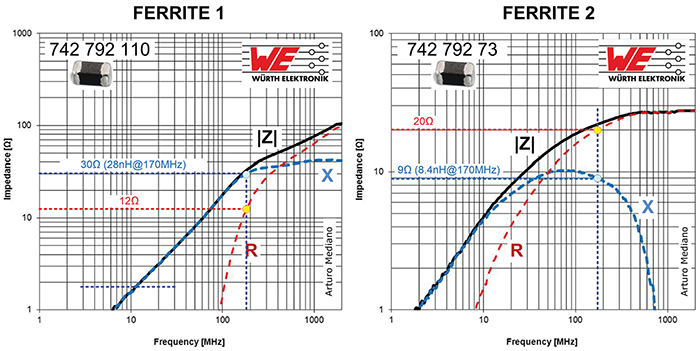 Figure 3: Impedance versus frequency for the two ferrites used in our examples: ferrite 1 (left) and ferrite 2 (right)

Note that ferrite 1 has more reactive than resistive impedance at frequencies below 400MHz. At 170MHz that ferrite offers 12Ω resistive versus 30Ω inductive. The inductive effect has a dominant effect in Z and an important resonating effect with the IC2 load capacitance appears.

When choosing a ferrite, we must try to add resistive losses, so let me show you what happens with a new ferrite with a similar package. Impedance of ferrite 2 is included in Figure 3 (right). Note that, at 170MHz, the new ferrite has a resistive effect of 20Ω compared with a smaller inductive effect. Now, full impedance Z is almost due to the resistive effect. That is because this ferrite creates the results in Figure 4, WITHOUT any damping resistor. 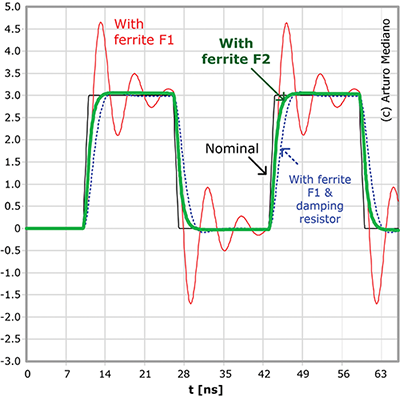 Note that now ringing is not created and signal degradation (increasing rise and fall times) is better than using a damping resistor.

So, be careful when including a ferrite in your designs if, at the frequency of interest, that ferrite has a big reactive (inductive) effect.
Try another reference with more losses.

Arturo Mediano received his M.Sc. (1990) and his Ph. D. (1997) in Electrical Engineering from University of Zaragoza (Spain), where he has held a teaching professorship in EMI/EMC/RF/SI from 1992. From 1990, he has been involved in R&D projects in EMI/EMC/SI/RF fields for communications, industry and scientific/medical applications with a solid experience in training, consultancy and troubleshooting for companies in Spain, USA, Switzerland, France, UK, Italy, Belgium, Germany, Canada and The Netherlands. He is the founder of The HF-Magic Lab®, a specialized laboratory for design, diagnostic, troubleshooting, and training in the EMI/EMC/SI and RF fields at I3A (University of Zaragoza), and from 2011, he is instructor for Besser Associates (CA, USA) offering public and on site courses in EMI/EMC/SI/RF subjects through the USA, especially in Silicon Valley/San Francisco Bay Area. He is Senior Member of the IEEE, active member from 1999 (Chair 2013-2016) of the MTT-17 (HF/VHF/UHF) Technical Committee of the Microwave Theory and Techniques Society and member of the Electromagnetic Compatibility Society. Arturo can be reached at a.mediano @ieee.org. Web: www.cartoontronics.com 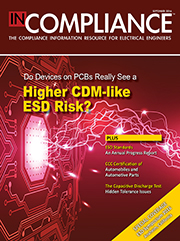