Just before the end of 2014, the U.S. Federal Communications Commission (FCC) released revised equipment authorization rules that, among other changes, will require responsible parties to file all applications for certification with Telecommunications Certifications Bodies (TCBs).  Under current rules which will soon change, the FCC still processes certain applications, which account for a very small fraction of certification applications.

As set forth in the FCC’s Report and Order released December 30, 2014, once the new rules become effective, the FCC’s Office of Engineering and Technology (OET) will no longer accept and grant applications for Certification. However, the OET will still administer pre-approval guidance pursuant to codification of its “permit but ask” procedures. Those procedures will be extended to all RF devices currently on OET’s exclusion list which has earmarked a changing list of device types for Commission-only certification. In addition, once the new rules are effective, either the FCC or the TCB can set aside that particular TCB’s certification grants issued within the past 30 days, after which only the Commission can revoke certification.

Under the pre-approval guidance process, OET will continue to exercise oversight of TCBs by identifying the types of devices for which a TCB will be required to consult with OET before the TCB can issue a grant of certification. Future changes to the list of devices subject to the pre-approval guidance will be made via Commission/OET decision documents and OET’s Knowledge Database, in much the same way as the exclusion list has been periodically amended in the past. In this way, the FCC intends to preserve its control over the authorization of devices with a greater potential for causing harmful interference, or those requiring certain features to protect incumbent users against interference (for example, Medical Body Area Network (MBAN) devices may operate on a secondary basis in the same band as primary Aeronautical Mobile Telemetry (AMT) in the 2.360-2.390 GHz band), while facilitating a greater responsibility for TCBs.

The modified equipment authorization rules will take effect 30 days after publication in the Federal Register (which has not yet occurred as of this writing), after which time, the FCC will no longer accept any equipment certification applications. However, only the FCC may grant a waiver of the rules in connection with a request for equipment authorization.  Responsible parties are advised to seek and have granted waivers from the FCC in hand before submitting certification applications that rely on a waiver.

The FCC’s Report and Order adopts a number of other changes, many of which impact TCBs directly, including the following:

The FCC also confirmed that it will continue to require all laboratories that perform certification or Declaration of Conformity testing to be accredited under ISO/IEC 17025, a requirement it believes appropriate in light of increasingly complex technologies and devices being brought to market. The FCC specifically refused to permit the outsourcing of testing to competent but unaccredited entities. Existing unaccredited laboratories that have been recognized under criteria in Section 2.948 of the FCC’s Rules will be recognized through their expiration date, at which time they will have to be accredited in order to continue to perform recognized testing. Testing results from such Section 2.948 laboratories will only be accepted for one year after the new rules become effective, and may only be used in support of certification applications filed before the date fifteen months after the new rules become effective.

The FCC’s Report and Order also updates references to industry measurement procedures in the Commission’s rules for Part 15 unintentional and intentional radiators, specifically ANSI C63.4-2014 and ANSI C63.10-2013. Additional rule changes to reflect future revisions of these cross-referenced standards will not take effect until the Commission or OET on delegated authority completes a rulemaking adopting any such change. The Report and Order also establishes specific site validation criteria for test facilities used for making radiated emissions at frequencies above 1 GHz,

The Report and Order also delegates authority to the Chief of OET to engage in limited rulemaking action to modify Parts 2, 5, 15, and 18 of the FCC’s rules in order to reflect updated versions of previously referenced standards and to adopt any appropriate transition periods. Any such limited rulemaking action must follow notice published in the Federal Register and provide an opportunity for public comment. This process should permit the FCC to more effectively keep pace with industry standards, rather than requiring a full rulemaking proceeding for every updated standard applicable to equipment measurement practices.

The Report and Order acknowledges that some decisions to update measurement standards may be more appropriately considered by the full Commission. In cases where the use of an updated standard would potentially raise major compliance issues, OET must refer the issue to the Commission for its review and decision.

The Commission’s Report and Order is a further step in the evolution of the equipment authorization procedures. By relying more heavily on TCBs, the Commission no doubt hopes that, on average, radiofrequency devices subject to certification can be authorized and, thus, brought to market more quickly. But, anticipating the introduction of more advanced technologies and the need for more complex testing, particularly to implement increasingly common spectrum sharing regulatory frameworks, the rule changes also signal the FCC’s intention to keep its hands on the reins to ensure that the potential for interference is minimized.

Chip Yorkgitis is a partner in the Washington, D.C. office of the law firm Kelley Drye and Warren LLP, where his practice focuses on telecommunications issues including regulatory compliance and spectrum management. He holds an A.B. (Astrophysical Sciences) degree from Princeton University and a J.D. degree from the Harvard Law School. Yorkgitis can be reached at cyorkgitis@kelleydrye.com. 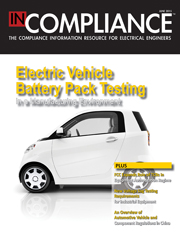