Many parameters used in EMC disciplines are defined in the frequency domain. Confronted to a time-domain waveform, it is a common practice for quick estimate to use the equivalent frequency “artefact,” based on rise time tr. However, an uncontrolled use of this fast calculation tool can lead to large under-estimate of some electromagnetic threats like lightning or power line transients, with serious consequences.

The method presented here gives a good approximation for the actual effectiveness of a filter or a shield vs a pulse with given duration “D.” A few examples are given, applied to a conducted 1µs/50µs 1kV lightning pulse and to a magnetic field pulse from a nearby lightning stroke. It is seen that with a prediction simply based on the rise time, a filter, shielded cable or enclosure shielding would have left the designer expecting respectively a 41dB, 30dB or 60dB attenuation, while instead, because of the 50µs duration, he will get only 4dB, 6dB and 18dB.

General Use of Frequency Domain in EMC Discipline

Many characteristic data and performances in EMC trade are given in the frequency domain. This is the case for:

Frequency domain calculations are often remarkably easy, especially for quick estimate where they can be based on sine wave assumption, because most coupling effects are simply sinus or cosine functions. However, in a certain number of cases, generally for isolated, transient phenomena like lightning, ESD, power line transients or NEMP, the sine wave hypothesis does not hold, and calculations have to be performed in time domain, using anything from simple maths up to more elaborate derivatives, integral expressions or Laplace transforms, to name a few.

Yet, for simpler, crude estimate, a rather handy time-to-frequency substitution is often used, based on the response of a 1st order, low-pass circuit to a step function. It is the artefact called “equivalent frequency,” which can be summarized as follows:

Unlike a periodic signal which can be translated into a Fourier series of sine waves harmonics, a non-repetitive step, a triangular or a trapeze pulse cannot be regarded as a sine wave, since there is no repetition period, hence no fundamental. But it can be translated into its Fourier integral, which is the basis of the “equivalent frequency” method which states that:

“A single pulse having a 10% to 90% rise time tr and a peak amplitude A0 can be assimilated to an imaginary sine wave that has the same derivative, the same peak amplitude and produce the same result.”

This sine wave does not exist, but its coupling effects on a receiving circuit would be approximately the same as the actual pulse, and some quick calculations become feasible. This equivalent frequency is expressed by:

The same conversion is used to express the minimum bandwidth needed for processing, with minimum edge “smoothing” a digital pulse having a given rise (or fall) time. For instance, processing a digital pulse with 3ns rise time, requires a bandwidth:

This also indicates that if someone wants to filter an I/O port carrying this signal, without affecting significantly its wave shape, the prospective filter must have a cut-off frequency > 117 MHz. [1]

Nevertheless, an uncontrolled use of the quick equivalent frequency method can lead to large under-estimate of some electromagnetic threats like lightning or power line transients, with costly or fatal consequences.

Actually, when the EMI threat coupling is not just derivative (based on rise time), but also related to the pulse duration, involving a direct conducted coupling, it can represent a substantial energy, the duration being a key factor for the protection of energy-sensitive devices. Therefore, the choice of a filter or shield protection simply based on the equivalent frequency will give a false expectation by showing optimistic results.

This is shown on Figure 1 where a triangular waveform of current, voltage or field, having a rise time tm and 50% duration “D,” displayed on the left in time domain, is confronted with its frequency representation on the right. The spectrum density has its 1st and 2nd corner frequencies F1 = 1/πD and F2 = 1/π.tm. This F2 frequency corresponds approximately to the equivalent bandwidth discussed previously. In terms of energy, that is (power x duration), related to the area under the spectrum envelope), the largest part is contained in the frequency span up to F1. For instance, with a typical lightning pulse, 60 to 70% of the energy is contained in this area bound by frequency F1.

Figure 2 is superimposing the frequency spectrum of Figure 1 triangular pulse with the attenuation plot of a typical, low-pass EMI filter. Below the filter cut-off frequency Fco, the area (A) of the Fourier integral remains unaffected. The filter attenuation starts showing up progressively above Fco, expressed by the hatched portion of the frequency spectrum. The right-hand part of the Figure shows the reverse, frequency-to-time conversion, whereas the attenuated pulse “A” has a more slanted rise front, because the filter has efficiently attenuated the high frequency portion of the spectrum. But comparing the new peak amplitude with the initial A0, they are practically the same.

Figure 2: Frequency spectrum for the triangular pulse of Figure 1 with the attenuation plot of a typical, low-pass EMI filter (left), and the corresponding frequency → time backward conversion (right)

This is because long pulses have a large energy content in the low frequency range, where the filter has no or little attenuation. Figure 3 is showing the response of a filter with 10kHz cut-off, for two pulse waveforms having a same 1kV amplitude. The short 100ns pulse is dropping down much before the filter has been charged up to the peak value, so the pulse is reduced to 10v, and its duration stretched over > 10µs. By comparison, the same 1kV pulse with 50µs duration (a lightning induced transient for inst.) is lasting long enough for the filter to get charged up to the peak value (Ref. 2) What is needed is a component that is not frequency-selective but amplitude selective, like a transient voltage suppressor (TVS). 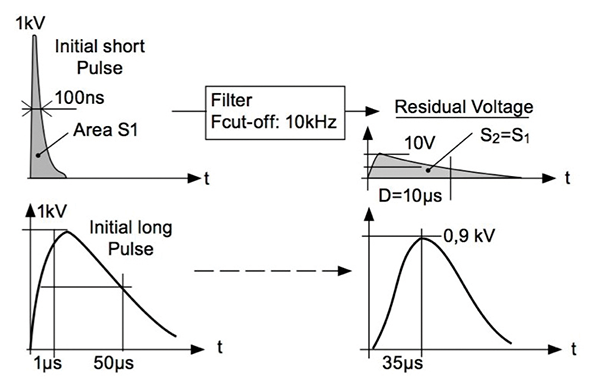 Figure 3: Disappointing results for an EMI filter against a long duration pulse

All the former discussion demonstrates that, against a pulse with significant duration, like D >> 1µs, the attenuation of an EMI filter or any low-pass element cannot be predicted simply from its published insertion loss, or attenuation.

The following, more rigorous expression gives the attenuation of a filtering element confronted to a pulse with duration “D:”

B10 = 10dB Bandwidth of the filter (or victim) response

The value B10, which is seldom provided, can be derived from the cut-off frequency (or attenuation slope) of the filtering element and its number “n” of elements:

Figure 4 based on Equation 2 is a nomogram giving directly attenuation AdB = 20 Log A0/A1 for any D50 x Fco product. This quick method for predicting the response to an isolated, energetic pulse can be applied successfully to three elements that apparently have not much in common: an EMI filter, a shielded cable, and a metallic foil shield against low frequency magnetic field. 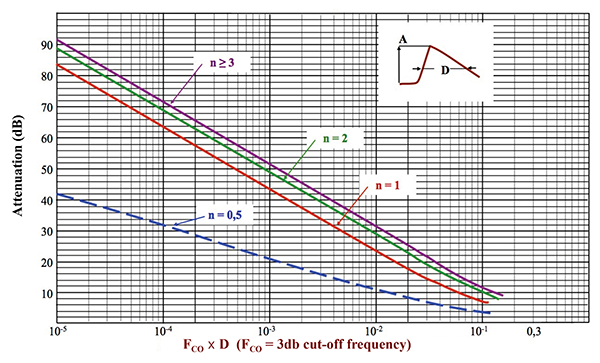 Figure 4: Nomogram for direct estimate of the attenuation of a single pulse by a low-pass filter

Calculate EMC filter attenuation for a lightning pulse per IEC 61000-4-5:

According to Figure 2, confronting the filter attenuation function with the pulse spectrum density, we can predict the attenuation by using Figure 4.

The nomogram Figure 4 indicate, at the intersect point of the n = 1 curve with the vertical line drawn up from Fco x D = 0,15 an attenuation = 4 dB

Had the designer chosen to use the equivalent frequency corresponding to the 1µs rise time, Fequ = 0.35/tr = 350kHz, the filter attenuation plot would have indicated 42 dB…!

Notice that increasing the number of filter stages, like n= 2 or 3 would not significantly improve the filtering effectiveness. A larger, more expensive three element filter, for a same (Fco x D) value would hardly reach 8 dB. To get a 14 dB reduction (that is a five times reduction of peak amplitude) would take a much larger 10 µF capacitor. Besides its cost it could also be prohibited for a power input application, because of peak current inrush at the turn-on of the equipment.

Application of the Method to a Shielded Cable

Although seldom regarded as such, a shielded cable has a reduction factor Kr (Ref.3) that can be assimilated to a first order (n=1) low-pass filter, improving with frequency up to an asymptotic value where it stabilizes to a flat value, generally around 0.3 -1 MHz for a single braid. This shield reduction factor is shown on Figure 5 for the very common single braid RG 58 co-axial cable. The cut-off frequency for the Kr (3 dB point) has been marked-up at 2 kHz, followed by a 20 dB/ decade slope, like a 1st order filtering action. 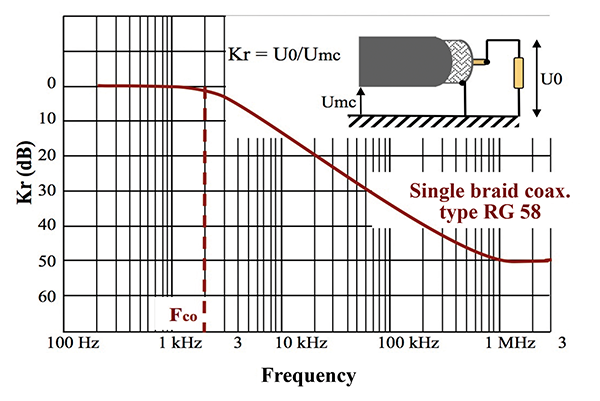 Calculate attenuation for a lightning pulse per avionics EMC standard DO160 Sect 22.

The test pulse is applied by bulk cable Injection

Had we chosen to use the equivalent frequency corresponding to the 6µs rise time, Fequ = 0.35/tr = 60kHz, the shield reduction plot would have indicated Kr = 30 dB! Unfortunately, this gross understatement is not uncommon. For instance the widely adopted lightning protection standard IEC 62305-2, in its Appendix D, Table D2, indicates for a single layer screened cable, a protection factor Kp = 0,02 (or -34dB), based on a 1µs rise time for the lightning current pulse, using
Fequ = 0.35/tr = 350kHz.

Even more rarely than for a shielded cable is a metal barrier viewed as a low pass filtering element. Nevertheless, looking at the shielding effectiveness (SE) plot on Figure 6 for a thin metal foil against a near magnetic field, with source at 1m, it has the profile of a n=1 rejection slope, as long as the skin effect does not bring its substantial absorption loss. 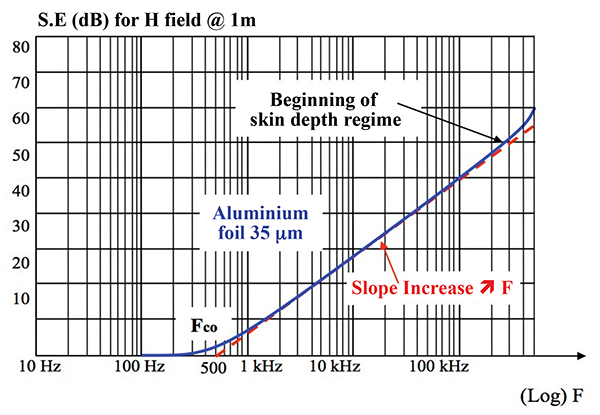 Application Example 3: Attenuation of a metal foil against a near H field.

Calculate the shielding effectiveness of a thin aluminium foil against a strong magnetic field pulse, whose source is at 1 meter.

Consider that up to ≈ 1MHz, the shielding is entirely due to reflection loss (no absorption).

The nomogram Figure 4, or using Equation 2, after application of the correction for B10 = 3 x Fco, we find an attenuation ≈ 18 dB (a 8 times reduction)

Had we chosen to use the equivalent frequency corresponding to the 1µs rise time, Fequ = 0.35/tr = 350kHz, the shield reduction plot would have indicated SE = 60 dB!

Some Precautions When Using This Method

For a filter, we must take into account the actual cut-off frequency of the component, as installed in the planned application. This is not necessarily the cut-off appearing on the vendor’s data sheet, where the published insertion loss has been measured in a 50Ω/50Ω test set-up. For instance, the 2.2µF filter of our example 1 shows a 3kHz cut-off. If instead of a 50Ω/50Ω configuration, the in-situ configuration is 5Ω/50Ω, the in-situ cut-off point (3 dB attenuation) will be 18kHz, resulting in hardly 1dB attenuation.

For any other coupling/attenuation mechanism which is linear vs. frequency in a known proportion, it will be easy to calculate the response to a single pulse, by using its first cut-off frequency or its 10dB bandwidth, whichever is known.