In this article, we discuss the PCB layout considerations and the design of the reference return paths for the one- and two-layer boards.

The PCB layout and the design of reference return connections (may also be referred to as grounding) play a critical role in the EMC performance of any circuit. This is especially critical for power converters, which are the focus of this series of articles. In circuit design, it can be easy to focus on power and signal trace connections while overlooking or not focusing enough attention on how circuit current returns. Proper reference return design can especially be challenging in single- and two-layer designs where best practices can’t always be applied. It is important to understand and visualize the path of the return current so its entire loop area can be controlled by design. The complete loop area of each circuit tends to be the dominant factor when compared with other parasitic inductances associated with the components or vias. This inductance has a detrimental effect on the EMC performance.

Visualizing the loop areas allows the designer to identify ways to reduce the size and cross-sectional area of the loops, thus reducing the inductance and high-frequency impedance. In single-layer PCB designs, there is fierce competition for copper routing real estate as all routes need to be completed on a single layer. In this setting, we don’t have the luxury of a reference return on the secondary side of the PCB. We rely on prioritizing the reference return connections between critical points and loop areas are often much larger than we would like to see. This can drive the need for additional decoupling capacitors, filter components and ‘jumper’ components to ‘stitch’ reference returns back together across other trace routes. Figure 1 shows an example of a jumper used to ‘stitch’ the ground areas back together across a signal trace route.

In two-layer PCBs, there is more opportunity for proper reference return design as the additional layer of copper combined with return vias allows us to make a more consistent return path with smaller loop areas. Stitching ground areas together in single- and two-layer PCBs is important not only for better emissions performance but also aids in reducing immunity issues. Figure 2 shows an example of implementing vias connecting different ‘ground floods’ on the top and bottom layers to create a ‘ground mesh’ and improve the flow of return currents. Efforts should be made to reduce the number of signals on the secondary side to create a more solid reference return plane.

Device application notes can sometimes recommend introducing splits into reference returns for returns such as analog and digital circuits. There may be legitimate reasons for splitting the reference returns but in our experience, this almost always causes an increase in EMC emissions or immunity performance issues. When splits are introduced, efforts are required to ‘reconnect’ these separate shapes either with jumpers or with capacitors. Often the efforts to reconnect the separate shapes are not as effective as making the original solid connections in the PCB layout.

During the design of the DC-DC Buck converter that has been discussed over the last three articles [x], the reference path design has been the main concern and will continue to be a concern of this study. The schematic and layout of this DC-DC Buck converter are shown in Figure 3. Figure 3a shows the power and signal traces as well as the reference return conductors (highlighted in green). Figure 3b shows the corresponding layout traces and the ground pads (highlighted in green).

All of the power and signal traces were routed on the top layer, and the reference return paths reside on the bottom layer which is a full solid plane. Implementing this circuit (power and signal traces) on the top layer serves two purposes. First, in later parts of this study this circuit will need to be constructed on a 1-layer PCB, and routing it on just the top layer now will help to keep the layouts similar between this PCB and the future one. Second, the full reference plane on layer two provides an ideal return path as it is not constrained. Such an unconstrained path is highly desirable, especially for the high-frequency currents. Without the solid reference plane, the effectiveness of the filtering on the board would be diminished and the loop areas involving the reference return would increase.

Let’s demonstrate this by looking at one of the output filtering capacitors shown in Figure 4. The forward path of the current is A-B-C-D, and the current return path is E-F-G.

With a completely solid GND plane, the currents will have no issues returning directly under the forward path, but in many practical designs this is just not possible. Generally, at least a couple of traces may need to be routed in the GND plane, especially on a two-layer board. The output section of this DC-DC power supply was modified to allow us to analyze how the current might return to the source when the ideal return path is broken by a trace in the GND plane. This modified output section is shown in Figure 5.

In this modified case, the feedback was routed on layer two as opposed to layer one. In this case, it would be expected that the current will initially follow the same path as it did in our original layout until it reaches the feedback trace that is routed in layer two. At this point, the current will have to go around the break in the ground plane and continue to return under the forward path back to the source. The loop area added to the currents path introduced by the cut-out in the return plane increases the inductance of the loop. This causes an increase in the radiation from the current loop [1]. Having a cut-out in the reference plane is therefore not desirable in more complicated designs where space is more a premium, this might be unavoidable.

Next, let’s look at the input filtering section shown in Figure 6. 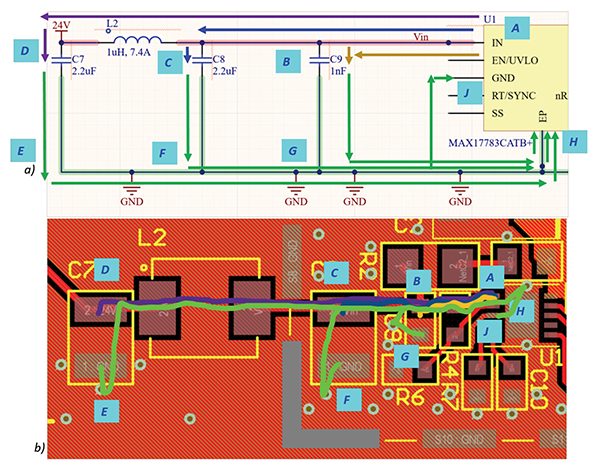 As described in Section 1, the high-frequency current paths were traced. Because we are concerned with the high-frequency noise that is generated by the switching in U1, we assume the current path starts at the Vin of U1. However, in this case, there are multiple possible return paths for the high-frequency currents. The obvious and most likely three paths are through C7, C8, or C9, which are drawn in purple, green, and blue, respectively. To complicate things further, the loop that noise chooses to satisfy may also change with frequency. For example, noise at 100MHz may choose to go through the smaller capacitor, C9, and noise at a lower frequency, such as 500kHz, may choose to go through one of the larger capacitors, C7 or C8. Interrupting any of these return paths has the potential to generate a common mode noise due to increasing the size of the possible current loops if that current path is being used. It is not guaranteed that if one of these paths is interrupted there will be an emissions failure, but it becomes more likely.

As the circuit complexity increases, it becomes challenging to visualize all possible high-frequency current paths. What can be done then?

This is where the application of some good EMC rules of thumb can help. Here are several that we have identified over the years by working on power converters and solving EMC emissions issues:

All of these approaches reduce the current loop area and serve to reduce radiated and conducted emissions from the switched-mode power supply.

The next several articles will be focused on an AC/DC power supply that utilizes an Off-line Flyback circuit. For safety purposes, the primary side and secondary side circuits must be isolated. Figure 7 shows a part of the schematic for the Maxim MAX5022 Evaluation kit [2], with the current path on the primary side of the transformer shown on the left-hand side of Figure 7 whereas the path of the current flow on the secondary side of the transformer is shown on the right side of Figure 7. Forward currents in both loops are drawn in RED color and return currents are drawn in GREEN color. Note the dashed line in parallel with C7 that denotes the current flowing back to the source from the secondary to the primary through a stitching capacitor that is safety rated. This capacitor provides a pre-determined path for the noise currents to return back to their source along the PCB surface rather than through the air, thus reducing radiated and conducted emissions. 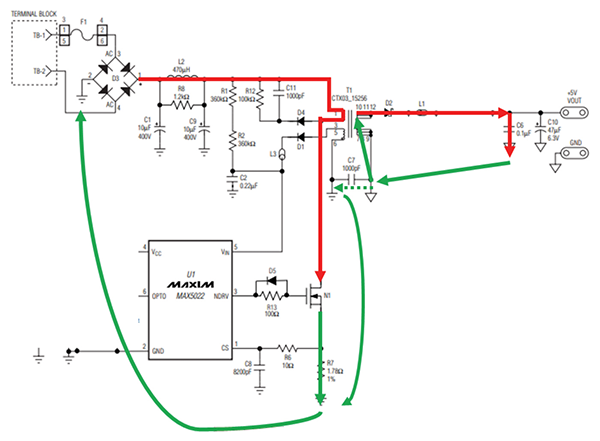 The next article will discuss the design of the AC/DC Off-Line Flyback Converter. We will present a schematic and PCB layout along with supporting design documentation.