This is the fourth article in a series of articles devoted to the design, test, and EMC emissions evaluation of 1- and 2-layer PCBs that contain AC/DC and/or DC/DC converters, and employ different ground techniques [1, 2, 3]. In this fourth article, we are still focused on the DC/DC power converter board (2-layer PCB). In this article, we will evaluate the implementation of several EMC countermeasures and present the radiated emissions results according to CISPR25 Class 5 limits.

In the first article in the series, [1], we defined the overall design problem. The second article, [2], focused on the details of the 2-layer DC/DC converter design. 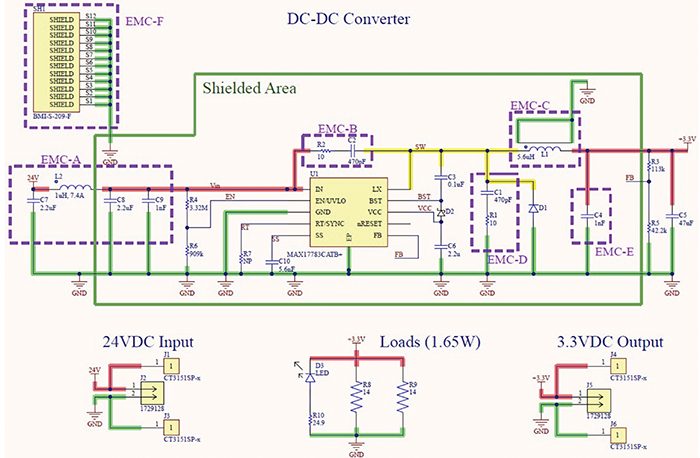 The impact of these countermeasures is discussed next. The article concludes with a brief description of what can be expected in the next article in the series.

Radiated emissions were measured in the frequency range of 150 kHz – 30 MHz. The baseline results (Figure 4a) show a high level of emissions in the 25 – 30 MHz band. To attempt to reduce these emissions two capacitors C9 = 1 nF (EMC-A) and C4 = 1 nF (EMC-E) were populated. The radiated emissions measurement taken with these countermeasures populated is shown in Figure 2. See Figure 6 in the 3rd article in the series for a reference legend to interpret plots in this article [3]. This Figure was not duplicated in this article to save space. 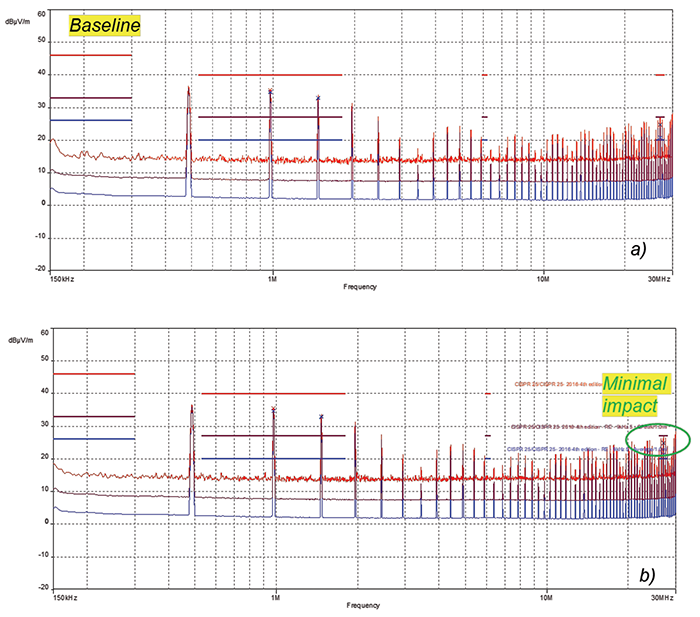 Typically, these 1nf capacitors help filter the noise in higher frequencies. However, as the plot in Figure 4b shows, they had a minimal impact on radiated emissions performance in the upper-frequency range of this band.

Next, we targeted emissions in the lower frequency range of 0.9 – 2 MHz. A 1 µH input inductor, L2, was placed. The radiated emissions measurement taken with this countermeasure in place is shown in Figure 3. 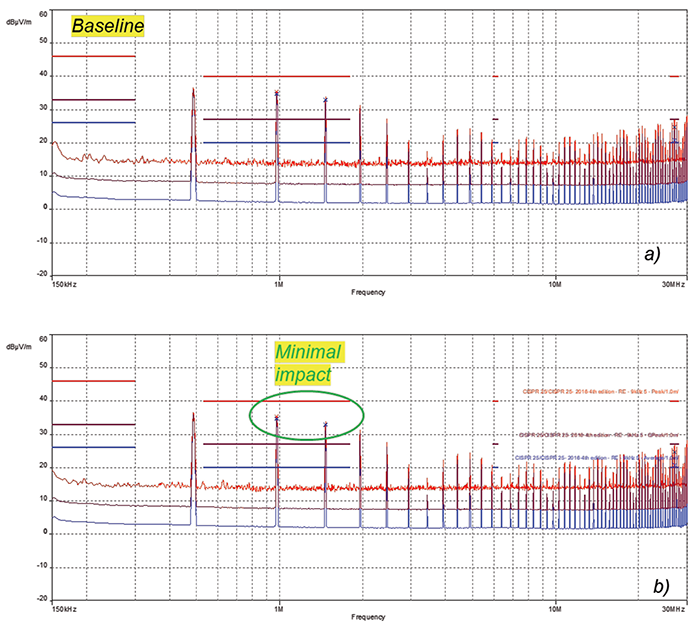 Typically, this inductor helps to reduce emissions in this range by filtering the input and attempting to prevent noise from getting onto the harness where the 2-meter wire length acts as an effective re-radiator. However, as Figure 5b shows, it had a minimal impact in the 150kHz – 30MHz range.

The results of this testing suggest that the noise that is causing emissions at these lower frequencies is either radiating directly from the PCBA (Printed Circuit Board Assembly) or common-mode emissions (rather than differential mode noise) conducting out on the wire-harness. This leads us to our next countermeasure of shielding the switching inductor L1. Due to the ineffectiveness of both the 1uH inductor and the 1 nF capacitors, they were removed from the sample before testing the next countermeasure.

Next, the switching inductor, L1, was changed to a Vishay 3232 IHLE 5.6 µH. These inductors have an integrated E-field shield that is tied to the ground on both sides of the inductor. They offer a way to capture the emissions that radiate directly from the switch inductor and boast a 20 dB E-filed reduction at 1 cm [4]. The radiated emission results with the switching inductor changed to a Vishay 3232 IHLE 5.6 µH are shown in Figure 4. 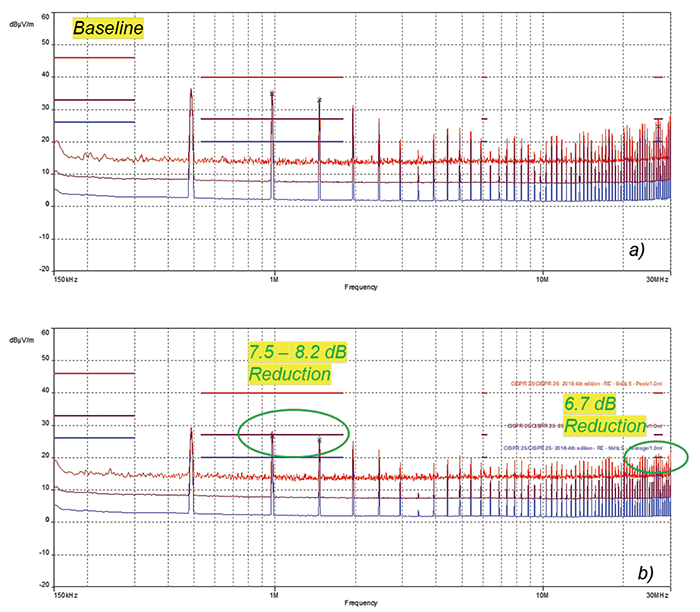 As the plots show, the inductor had a substantive impact, not only in the 0.9-2 MHz range but also in the 25 – 30 MHz range. Because the objective of this shielded inductor is to reduce the emissions by capturing the electric field, a significant improvement was observed in the monopole antenna range (150kHz-30MHz). This justifies changing the measurement setup to the biconical antenna to evaluate the improvements in the 30 – 300 MHz range. The results are shown in Figure 5 (Note: From this point forward, measurements above 300 MHz are not captured due to passing results in baseline testing).

As Figure 5 shows the IHLE 5.6uH inductor is also successful at reducing emissions in the 30 – 70 MHz band, but it is not as successful around 180 MHz. As the noise in this range is likely due to ringing in the switching waveform, we often recommend the use of a snubber (series R-C) circuit with the purpose of dampening the ringing waveform and reducing the high-frequency content of the signal. The IHLE 5.6uH inductor is removed from the PCB during the evaluation of snubbers to clearly see the impact of the snubbers. 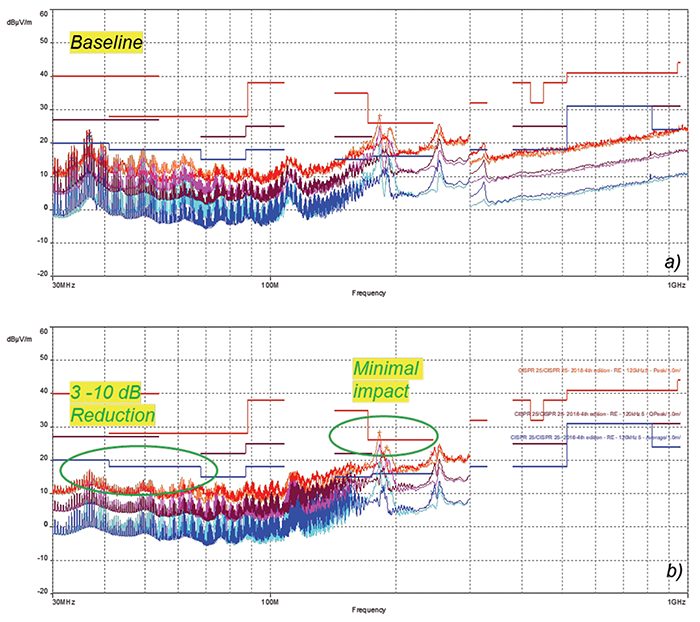 A snubber was placed across the catch diode D1: R1 = 10 Ω, C1 = 470 pF (EMC-D). These values were chosen based on experience gained from work on other SMPS designs. These values have not been optimized nor calculated using the various methods available, but in a time-restricted scenario, they provide a good starting point and allow us to see if a snubber can make a positive impact. The radiated emissions test results are shown in Figure 6. 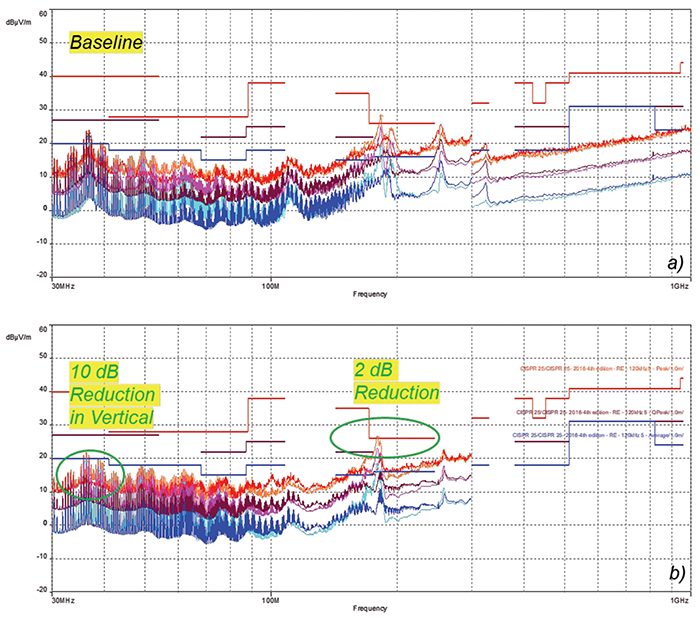 Next, the snubber is removed from its location across the catch diode and placed across the FET which is internal to the IC. This snubber is placed on the placeholders R2 and C2 (EMC-B). The radiated emissions results are shown in Figure 7. 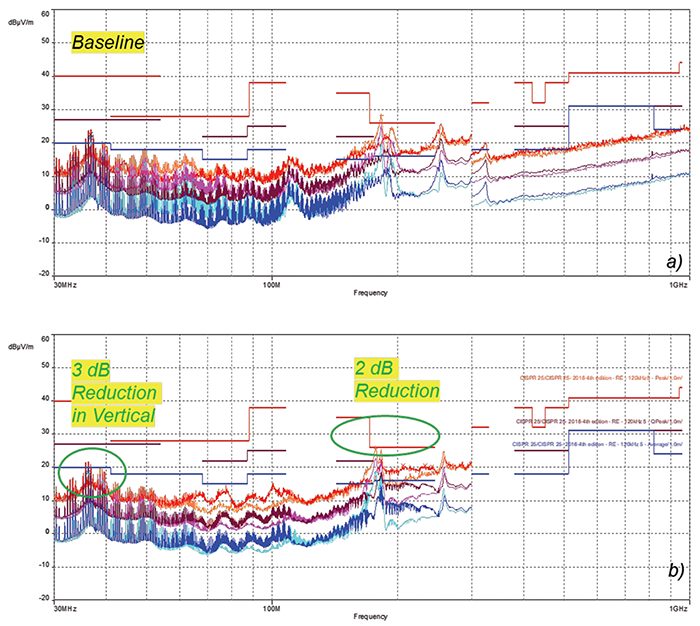 The last step in evaluating these snubbers was to populate the placeholders for both the FET snubber (EMC-B) and the catch diode snubber (EMC-D) combined. The radiated emissions results are shown in Figure 8. 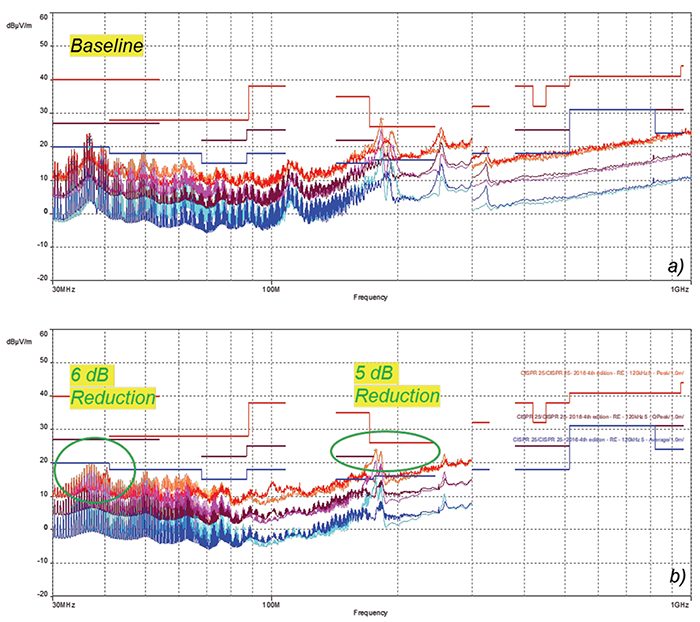 This shows a significant reduction in the emissions in the 30 – 80 MHz range and around 180 MHz. This technically passes CISPR 25 Class 5, but due to expected lab-to-lab variation greater margin is desired in the average measurement around 180 MHz before finalizing the design.

Conducted emissions countermeasures resulted in the addition of two 2.2 µF capacitors in parallel with C7 and C8. Additionally, the input inductor L2 was changed to 2.2 µH; also, C9 and C4 were populated with 10 nF capacitors. The switching inductor L1 was also populated with a Vishay 3232 IHLE 5.6 uH inductor. The input filter and inductor changes provided much benefit to the conducted emissions. These results will be shown in detail in the next article in the series. For now, we will continue to focus on the radiated emissions results. 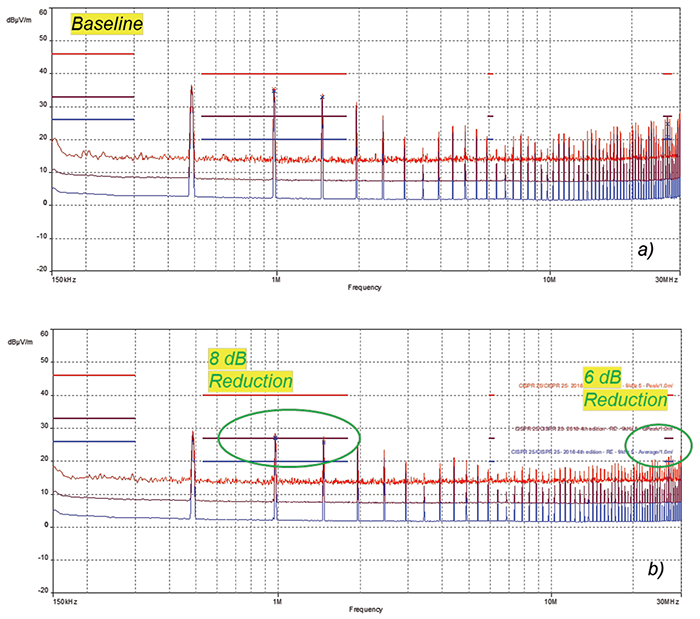 Figure 9: RE results 150 kHz – 30 MHz: a) baseline b) with conducted emissions countermeasures

The conducted emissions countermeasures were very effective at reducing radiated emissions in both the 150kHz – 30MHz and 30MHz – 300MHz ranges. These DUT modifications are preserved for the following sections of this article.

7. EMC-F – Impact of the Shield Frame

Next, a shield frame SH1 was soldered to the PCB on the perimeter over the shielded area shown in Figure 10. This is EMC countermeasure EMC-F. This is in addition to the conducted emissions countermeasures previously described. 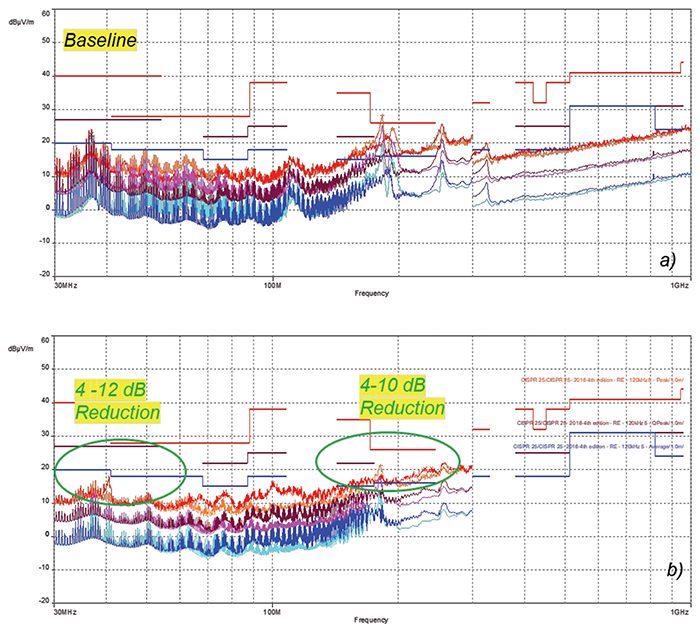 It is important to note that the shield frame was placed without a shield lid in this first evaluation. This is being evaluated, since in some, cases sufficient emissions reductions can be achieved with only the frame component. Figure 11 shows the radiated emissions results in the frequency range 150 kHz – 30 MHz, while Figure 12 shows the results in the range 30 – 1,000 MHz. 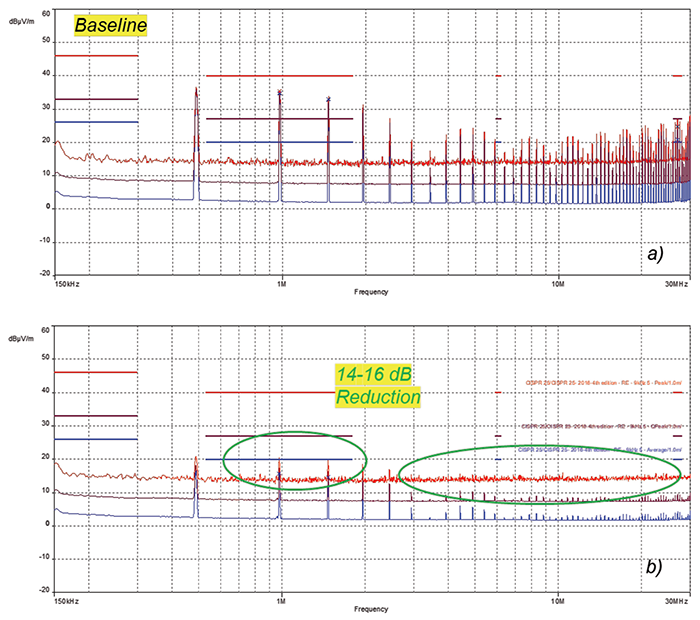 Figure 11: RE results 150kHz – 30 MHz: a) baseline b) with a shield frame and conducted emissions countermeasures 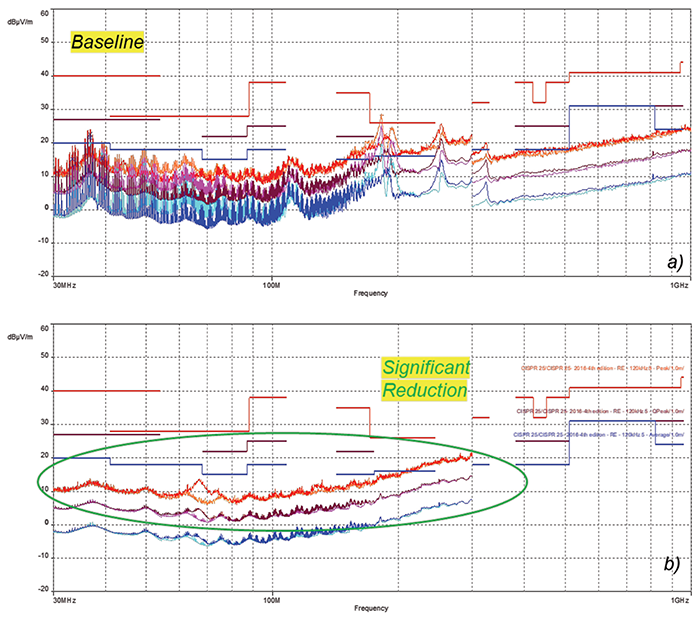 Figure 12: RE results 30-1,000 MHz: a) baseline b) with a shield frame and conducted emissions countermeasures

The addition of the shield frame to the conducted emissions countermeasures provides significant decreases in emissions in the range of 150kHz – 300MHz and makes the emissions low enough to pass CISPR 25 Class 5 radiated emissions limits.

If this SMPS was a product that was intended for sale, the next step would be to start removing the EMC countermeasures one by one to reduce the Bill of Materials (BOM) cost of each unit produced. An example of this would be trying to remove the IHLE 5.6 uH inductor in favor of a cheaper inductor. In our previous trials, this increased emissions in the 0.9 – 2MHz range above the average limit. An evaluation was performed by exchanging the IHLE 5.6 uH E-field shielded inductor (L1) for the original IHLP 5.6uH magnetically shielded inductor (L1) and a shield lid was placed on the shield frame. The radiated emissions results with the shield lid and L1 swapped are shown in the frequency range 150 kHz – 30 MHz in Figure 13. 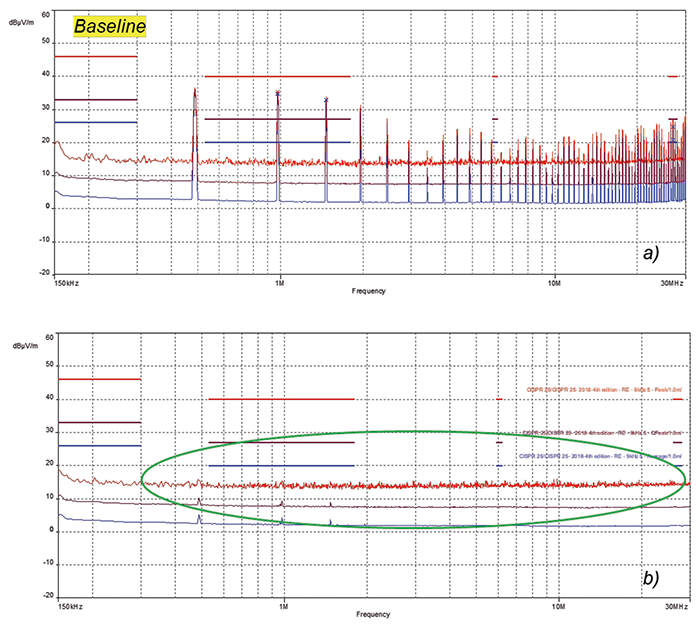 Based on the results presented in this article, we recommend finalizing the design to meet radiated emissions requirements (CISPR25 Class 5) with the following countermeasures populated on the baseline design:

Populate both frame and lid

Additional effort can be applied to this configuration of EMC countermeasures to further optimize for cost while meeting EMC requirements. If the target application does not require the stringent levels of CISPR25 class 5, it may be possible to remove the EMC shield in favor of cheaper countermeasures.
A full analysis has not been performed on this design to pursue these potential objectives.

The next article will be devoted to the conducted emissions results. 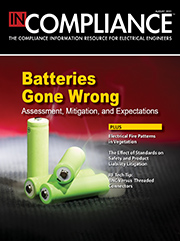