What Every Electronics Engineer Needs to Know About: ESD Simulators 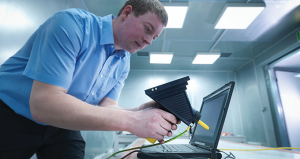 Electrostatic Discharge (ESD) simulators also known as “ESD Guns” play an important role in product development and their proper selection and use are considered essential to any Electromagnetic Compatibility (EMC) test laboratory. There are several different types of simulators to choose from, including those that test components according to the charged device model (CDM), human body model (HBM), or machine model (MM), and system level tests as described in standards such as IEC 61000-4-2 or ISO 10605. In this article we focus on ESD simulators that perform testing of complete apparatus in accordance with IEC 61000-4-2 and other system level test standards.

In addition to allowing test engineers/technicians to fully test a product in accordance with IEC 61000-4-2, ESD simulators allow EMC practitioners and product developers to quickly gain valuable information about the robustness of the equipment under test (EUT) to external transient electromagnetic phenomena. ESD simulators produce a severe high voltage, high current, high frequency content pulse. When this pulse is applied to the EUT, design deficiencies show up as automatic resets, program crashes, other unusual forms of product operations or by the product not meeting spec. Root cause analysis of these EUT failure modes often reveals failure mechanisms such as significant circuit loops, deficient power decoupling, and inferior grounding within the PCB. Other design deficiencies which result in failure of the ESD test include insufficient EMI suppression built into I/O ports, absent or incorrectly connected shields, incorrectly installed filters, and inadequate bonding of panels, covers or internal shields (just to name a few). All of this valuable knowledge concerning the EUT’s lack of robustness to EMI transients is obtained easily and quickly with one relatively simple tool – the ESD simulator.

With the ESD simulator there is no need to spend a considerable amount of time setting the EUT up in an EMC chamber, scanning over large frequency range, waiting patiently for long periods of time, while carefully observing the EUT until a valid failure occurs – all of which happens when performing a typical radiated or conducted radio frequency (RF) immunity test!  With ESD simulators, development work can be accomplished on the spot, using a simple test setup and ground reference plane, with the added benefit that the same EUT design enhancements developed to pass ESD testing often help pass other forms of EMC tests to which the EUT will likely be subjected (RF emissions, RF immunity, electrical fast transient immunity, etc.).

If the purpose of the ESD simulator is to reproduce practical conditions, realistically, reproducibly and quickly, then what characteristics should one consider when selecting an ESD simulator to meet this purpose and your own testing needs? Everyone’s situation is different so there isn’t a one size fits all answer however, the following are some things to carefully consider when outfitting your organization with ESD simulators.

Although not exactly related to the ESD simulator itself, recognition that interpretation and skill of the ESD test engineer/technician is a key ingredient to effective ESD testing. User knowledge, experience and skills are more important than what ESD gun is selected and used to perform the test. For instance, the ESD test engineer/technician will know the ESD output pulse is a greater than 1 GHz phenomenon and that it is essential that the pulse return path of the simulator is fed back through the simulator’s earth cable, and that the return cable of the simulator is always connected to the ground reference plane of the test setup. They will know that they should hold the simulator perpendicular to the EUT surface while zapping away at it, while at the same time making sure they are keeping the return cable far away from the EUT. They will know the standard requires performance of a pre-test verification and that by not following these and other accepted ESD test practices, they could potentially be over or under testing the EUT.

Once operator skill is addressed, it is time to concentrate on other characteristics of the ESD simulator that will best meet your testing needs. If there is going to be a lot of time spent performing ESD testing, then an ergonomic, lightweight, non- fatiguing design is an important consideration. Along with ergonomics, one should take a look at the display and determine if it is easy to view, easy to manipulate settings, and provides a status of successful air discharge and other important parameters (state of battery charge, the current voltage polarity setting, etc.).

If battery powered, how long can the simulator be operated before recharging is required?  Given a typical testing workload, is it several minutes, hours, or days? Most modern ESD simulators should operate for days on one charge. Once discharged, how long will it take to fully charge the battery? How many charge/discharge cycles can occur before the battery needs to be replaced entirely? At its end of life, how will proper battery disposal occur? Given this information, consider how many spare battery packs are required and if they can handle multiple removals and insertions into the simulator without incurring damage to either the battery pack or the ESD gun itself.

Currently, the highest severity level set by product-specific standards is 8kV contact discharge, 15kV air discharge modes. Is the ESD simulator is capable of generating these test levels with margin? IEC 61000-4-2 also calls for 10 single pulses at an interval of 1 second or greater between them. Is the simulator capable of performing this requirement but also have the ability to operate in other repetitive or continuous modes of operation (capabilities that are advantageous during troubleshooting)? Most modern ESD simulators will most likely have these capabilities, but it’s a good idea to check just to be certain. You don’t want to be surprised later that the simulator chosen lacked this fundamental capability.

What types of additional options and accessories are available with the ESD simulator that may benefit reduced product development times? For instance, in extreme cases the real rise time of an ESD event may be faster than the typical 0.8ns as described in IEC 61000-4-2. Is there a fast rise time tip available for the selected simulator in case the need arises for its use? For whatever reason, will it be necessary to hold the simulator a considerable distance away from the EUT during testing? If so, a remote discharge tip may come in handy. Is it available for the ESD gun selected? How about flexible tips for hard to reach test points? Are they also readily available? Will a tripod and carrying case also be of benefit? Can adapters be purchased which allow creation of E and H fields (also useful in locating design weaknesses) or will these devices need to be built in-house?

Some other considerations when selecting an ESD simulator are that of discharge network and the discharge remover. IEC 61000-4-2 requires a 150pF/330Ω discharge network, which you should confirm is available with the chosen simulator but, are there other types of networks available in case any other standard besides IEC 61000-4-2 needs to be performed? Does the simulator include an internal charge bleed off function or must you build or procure an external device on your own?

How will a more thorough, in between calibration cycle check of the simulator’s output waveform get accomplished? It is highly recommended that the current sensing transducer built as described in the latest version of the standard is obtained and used. It should be utilized frequently in between calibration cycles in order to be absolutely certain the waveform produced by the simulator is still within spec. It’s not very fun finding out from the calibration lab that your ESD gun is out of spec. and you need to repeat testing on all of the products tested with it since the last date that a known good calibration was performed! Effective use of the transducer will alleviate some of this anguish.

Finally, what kind of warranty is provided and how will repairs be accomplished?  What is the turn around time for calibration and repairs? How often will the gun get sent back to the manufacturer for calibration and where? Should you purchase and have on-hand a backup simulator or simulators or should you rent them? Should the backup simulators be of the same make/model so retraining of test personnel is minimal and perhaps test repeatability is maintained?

The above suggestions are some of the most important things to consider when selecting an ESD simulator. While performing your own research, you may develop an understanding of other factors that are important to your particular testing needs and which you should pursue further.  Good luck in your selection!