Electromagnetic radiation that adversely affects device performance is generally termed EMI (ElectroMagnetic Interference). Interference takes many forms such as distortion on a television, disrupted/lost data on a computer, or “crackling” on a radio broadcast. Many electronic devices not only emit electromagnetic fields which might cause interference in other systems, but they are also susceptible to stray external fields which could affect its performance. As a result, they must be shielded to ensure proper performance.

Currently, the FCC regulates EMI emission between 30 MHz and 2 GHz, but does not specify immunity to external interference. As device operating frequencies increase (applications over 10 GHz are becoming common), their wavelengths decrease proportionally, meaning that EMI can escape/enter very small openings (for example, at a frequency of 1 GHz, an opening must be less than 1/2”).

The trend toward higher operating frequencies therefore is helping drive the need for more EMI shielding. As a reference point, computer processors operate in excess of 250 MHz and some newer portable phones operate at 900 MHz. Additional EMI background information is provided in an EMI Primer at the end of this article.

Shielding is the use of conductive materials to reduce EMI by reflection or absorption. Shielding electronic products successfully from EMI is a complex problem with three essential ingredients: a source of interference, a receptor of interference, and a path connecting the source to the receptor. If any of these three ingredients is missing, an interference problem cannot exist.

Metals (due to their inherent conductivity) traditionally have been the material of choice for EMI shielding. While effective in terms of shielding, metals can be heavy and bulky solutions to the design challenge of EMI. In recent years, there has been a tremendous surge in plastic resins (with conductive coatings or fibers) replacing metals due to the manufacturing flexibility, durability and weight reduction of plastic components. Even though plastics are inherently transparent to electromagnetic radiation, advances in conductive coatings, conductive fibers and compounding techniques have allowed design engineers to take advantage of the merits of plastics while enhancing EMI shielding effectiveness.

Advantages of Thermoplastics vs. Metals

In general, Thermoplastics deliver significant advantages over Metals. As related to EMI shielding, these include:

There are many alternative approaches for EMI shielding with thermoplastics. For purposes of this article, only the most popular approaches will be highlighted. A Business Communications Company industry report estimated that the plastics shielding sector will account for 37% ($156 million) of the total United States EMI shielding market ($422 million). The European market is substantially larger (due to more stringent agency standards) and the Asian market is even bigger due to the sheer volume of electronic systems assembled in that region.

Over the past few years, EMI Shielding Compounds have arrived on the market by incorporating EMI shielding fiber technology (both Stainless Steel and Nickel Coated Graphite) into thermoplastic compounds. As the plastic resin is insulative, these conductive fibers (with a high aspect ratio) create a conductive network within the resin. Performance of conductive fiber filled compounds is maximized by utilizing special long fiber manufacturing techniques and cube (dry) blending metal fiber bundles in order to minimize conductive fiber damage.

Fiber properties are summarized in Table 1 for the most common fiber fillers for EMI shielding compounds.

A metal foil or conductive fabric applied to plastic is labor intensive and ideal only for low volume and simple geometry designs. Without higher volumes (justify tooling investment) or cost minimization objectives, these applications would not be appropriate for EMI Shielding Compounds.

Using a simple metallic inner shield to isolate EMI at the most basic level (Printed Circuit Board, or “On-Board” Shielding) may reduce the requirements for shielding enclosures. EMI Shielding Compounds may be more appropriate than on-board shielding when weight savings, secondary operation reduction, and/or design complexity are desirable attributes.

Plastics with a Conductive Coating

Within Conductive Coatings, there are three significant coating technologies (vacuum metallization, electroless plating, and conductive paints). For the purposes of this article, these three coating technologies will not be compared versus each other. Rather, this article will help the reader become familiar with the competitive processes, advantages and disadvantages, and opportunities for EMI Shielding Compounds.

The three major coating processes are briefly discussed below. Conductive paints are the most common method of applying a conductive surface coating to plastics, but vacuum metallization is gaining ground due to its high quality control. An example of process costs is discussed in a section below.

The advantages and disadvantages EMI Shielding Compounds and Conductive Coatings are summarized in Table 2. 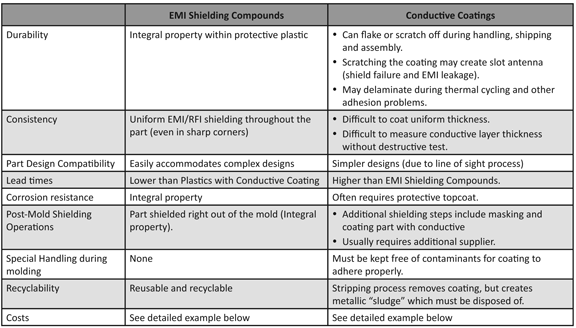 While it is rather easy to compare the advantages and disadvantages, it is difficult to compare the shielding capabilities as EMI Shielding Compounds shield primarily by a different mechanism (absorption) than Conductive Coatings (reflection).

During production, coaters test the surface resistivity of parts. While this step eliminates non-conductive parts, it does not identify other quality problems (scratched surfaces or poor coating adhesion and coating thickness variations).

An actual cost example is highlighted in Exhibit A. 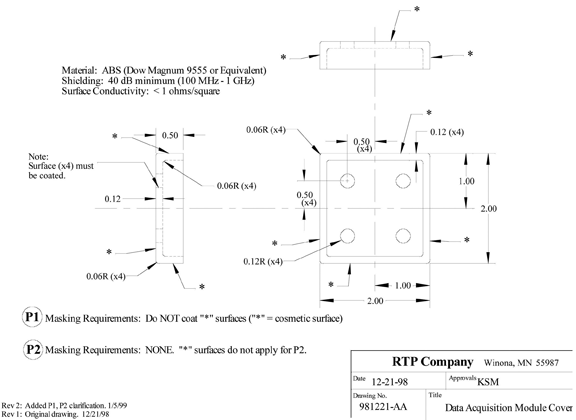 1. Does not include any molding costs

2. Typical 3% coating scrap rate not included (supply 103 parts to coater to make 100 “good” parts).
3. Coating costs based on “best” market price of $0.80/pound for ABS.
4. No shipping costs to/from coating supplier.
5. Quantity noted is a lifetime quantity. Not unusual, as part designs continually change when electronics are involved.
6. Shielding effectiveness (and frequency range) is equivalent across all scenarios.

A few key insights related to the Conductive Coatings are:

This example was designed to offer Conductive Coatings the most favorable conditions possible. The following items would increase Coating costs (but not affect EMI Shielding Compound costs):

Exact cost comparisons are almost impossible to make as there are many variables and assumptions that apply. Yet, even under the most favorable conditions for Conductive Coatings, Figures 1 and 2 highlights that EMI Shielding Compounds are less costly than Coatings under both low and high volume applications. 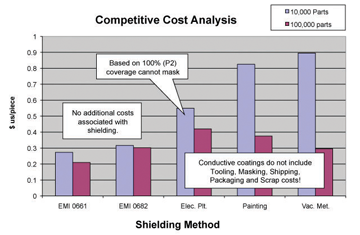 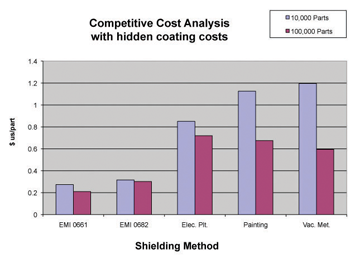 An electronic device exhibits EMC (electromagnetic compatibility) if it operates effectively in its designated environment without unacceptable interference to other devices.

What does EMI consist of?

Electromagnetic waves consist of both an E (electric) field and an H (magnetic) field oscillating at right angles to each other. The ratio of E to H is called the wave impedance (measured in ohms). A device operating at high voltage, with only a small amount of current flow, generates waves with high impedance. These are considered E fields. Conversely, if a device contains a large current flow compared to its voltage, it generates a low impedance, H field.

The importance of wave impedance is shown by an EMI wave encountering an obstacle such as a metal shield. If the impedance of the wave differs greatly from the natural impedance of the shield, much of the energy is reflected and the rest is transmitted across the surface boundary where absorption in the shield further attenuates it.

EMI emissions from most electronic devices are typically high frequency, high impedance. The major wave component is the E field. Metals are intrinsically low impedance because of their high conductivity. Thus, the high impedance E wave energy is mostly reflected from metal shields. Low impedance waves (H field dominant) are mostly absorbed in a metal shield because they are more closely matched to the metal’s inherent impedance. For maximum H-field absorption, shields need to have high magnetic permeability (ability of material to serve as path for magnetic energy).

In general, the intensity of the interference caused by the signal diminishes with increasing distance from its source.

What is EMI shielding?

Shielding is the use of conductive materials to reduce EMI by reflection and/or absorption. Shielding can be applied to different areas of the electronic system from equipment enclosures to individual devices (such as circuit boards).

Effective placement of shielding (barrier between a susceptible system and an external source of electromagnetic radiation) causes an abrupt discontinuity in the path of electromagnetic waves. At high frequencies, most of the wave energy is reflected from a shield’s surface, while a smaller portion is absorbed. At lower frequencies, absorption generally predominates.

Shielding performance is a function of the properties and configuration of the shielding material (conductivity, permeability and thickness), the frequency, and distance from the source to the shield.

What does Grounding have to do with EMI shielding?

Conductive components are grounded to protect equipment users from electric shock. If a system is properly grounded, all conductive elements are theoretically at zero potential.

Shielding against EMI emissions is commonly provided by a conductive enclosure. The separate parts of the enclosure must be electrically bonded together and grounded for the shielding to work. Ineffective grounding may actually increase EMI emission levels, with the ground itself becoming a major radiating source.

What is Shielding Effectiveness?

How well a shield reduces (attenuates) the energy of a radiated electromagnetic field is referred to as its shielding effectiveness (SE). The overall expression is:

The standard unit of SE measurement is the decibel (dB). The decibel value is the ratio of two measurements of electromagnetic field strength taken before and after shielding is in place. Every 20 dB increase in SE represents a tenfold reduction in EMI leakage through a shield. A 60 dB shield reduces (attenuates) field strength by a factor of 1,000 times (e.g., from 5 volts per meter to 5 millivolts/meter or a 99.9% attenuation level).

Among the typical applications for EMI shielding are the following:

Where is EMI shielding needed?

Uses for EMI shielding abound in computers, medical devices, telecommunications, and other types of electronic equipment. This type of equipment contains micro-circuitry that switches at high speed. Each switching event results in a short duration electrical pulse, which has a characteristic frequency inversely proportional to its time length. The FCC regulations define specific field strength limits between 30 MHz and 2000 MHz (2 GHz).

A Word About EMI Regulations

FCC regulations classify devices by their intended market – Class A devices include products for industrial and business environments while Class B devices are primarily intended for use in homes. FCC emission standards are more stringent for the mass-market Class B equipment than the Class A equipment.

How are devices tested for EMI Compliance?

Compliance testing requires sophisticated equipment and must be performed by accredited labs. If emission problems are found, the device will require additional shielding or redesign.

Neil Hardwick is a Marketing Manager for Conductive Products at custom thermoplastics compounder RTP Company. Hardwick has a BS from Purdue University and a MBA from Indiana University plus 15 years of experience working with conductive materials.  He can be reached at nhardwick@rtpcompany.com or (720) 862-6469.

Additional information is available at http://www.rtpcompany.com. 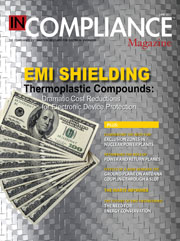