There are three basic phases in the design of a system (Asimow, 1962): 1) feasibility study; 2) preliminary design; and 3) detailed design. The relative content and extent of each of the design phases are determined completely by programmatic considerations which reflect knowledge concerning the market and the cost of the design. The flow and subsequent iterations in the total design of every system will however remain fairly consistent with regard to methodology and order. During the total design effort of all electronic systems, many considerations must be taken into account, one of which is electromagnetic compatibility (EMC).

The purpose of this article is to provide an order in the design of the electronic system such that EMC considerations can be evaluated throughout the design effort, producing an electromagnetically compatible system at a minimal cost.

The steps that make up the methodology of the EMC design flow diagram are as follows:

As can be seen Figure 1, many of the steps listed above have a number of arrows entering and leaving them. The flow from one step to another is dependent upon the phase of the design and the results of the analysis performed during the step. 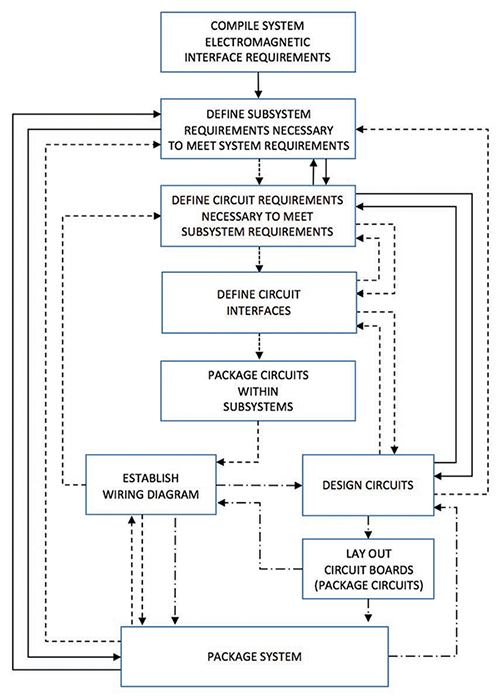 The feasibility study culminates in a set of useful solutions which carry with them a probability of the benefits-to-cost ratio being commensurate with the demand of the market. The steps and processes comprised in the feasibility study are as follows:

The design problem identifies and formulates the results of the needs analysis into a series of desired system outputs, and the synthesis fits the separate concepts together to produce an integrated system or series of systems yielding an expected cost of the design of each of the proposed systems. The results of these two steps are analyzed in the three successive steps to obtain a probability of the benefits-to-cost ratio being commensurate with the demand of the market. The study is concluded when this probability is high enough to warrant the expenditure of money and engineering hours necessary to complete the preliminary design phase.

The intent of the preliminary design is to establish an overall concept for the project, which will serve as a guide for the detailed design. The investigations performed are structured to obtain a high enough degree of certainty of having an economically viable product to warrant beginning the detailed design phase as well as portions of production planning. The steps and processes included in the preliminary design (Asimow 1962) are as follows:

The scope of each step is dependent upon the particular system under consideration. The step that we are concerned with is compatibility and, in particular, electromagnetic compatibility. The results of the electromagnetic compatibility analysis are guided by the three previous processes (i.e., selection of design concept, mathematical archetypes, and sensitivity analysis). The mathematical and sensitivity analyses must often be verified by tests.

Upon completion of the three steps listed above, an iterative process must be performed to ensure that the circuits as previously defined will be compatible with the required interfaces. If they are not, then the circuits must be redefined until compatibility at this point in the design is obtained. If this requires information that is not known for a particular circuit, then the circuit must be evaluated in detail. It is possible at this point that the subsystem requirements will have to be re-evaluated.

The steps comprised in the flow of the design during the detailed electromagnetic compatibility design phase, as illustrated in Figure 1 are: 1) design circuits; 2) lay out circuit boards; 3) establish wiring diagram; and 4) package system. Designing the circuits, establishing the final wiring diagram and packaging the system generally take place concurrently. The final package configuration of the system usually is not completed before the wiring diagram is completed, and likewise the wiring diagram usually is not completed before the layout of the circuit boards. However, this need not be the case, and the order of completion is dependent upon the capability of the system design team to estimate the problem areas prior to the actual design of the system. The investigations to be performed during the detailed EMC design phase are as follows:

The extent and content of each of the three phases of the design of a system are completely dependent upon economic considerations, and each phase is utilized to increase (or decrease) the probability of producing an economically viable system. Assuming that producing the system will be economically viable, regardless of when the certainty of the viability of the system is known, the general flow in the design procedure will remain fairly constant.

With regard to the EMC of the system, the most important single aspect is that the interfaces between the subsystems and the circuits within the system are compatible, where the compatibility is dependent upon the wire treatment and the packaging of the circuits, subsystems and systems. To obtain an electromagnetically compatible system at a minimum cost in terms of time, weight and size of the system, engineering hours and money, it is essential that the expected interface for every power and signal line leading to and from each proposed circuit be evaluated prior to the final design of any of the circuits.

It is recognized that deviations from this sequence are and, for that matter, should be made. However, the sequence described here provides a basis for examination of the problem of systems generation in order to optimize the effectiveness of electromagnetic compatibility activity. Consideration of the degree to which the sequence can be followed in light of programmatic factors (schedules, procurement plans, use of existing hardware, organizational relationships, etc.) can identify hazards and permit the redefinition of EMC activities tailored to the programmatic constraints.

Engleman, J., “Guidelines for The Design Review of Circuits,” Electronics Industries. May 1966.

George M. Kunkel is the founder and chief engineer of Spira Manufacturing Corporation. He holds both B.S & M.S. degrees in Engineering from UCLA, and has been active with the IEEE EMC Society for 50 years, serving as a chairman of multiple technical committees and working groups. Kunkel has authored over 100 EMC technical papers and revised several SAE-ARP test standards. He can be reached at George@spira-emi.com. 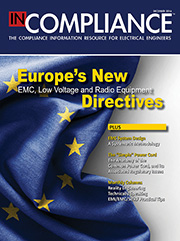