The application of electromagnetic compatibility standards is presented in a broad manner with requirements having been established for ground support equipment, ground transportation equipment, and communications equipment, as well as the launch and space vehicles, equipment, and systems.

NASA defines equipment as a generic term referring to various levels of hardware (with associated software) assemblages. For the general use, equipment usually refers to all units, subsystems and payloads which are to be integrated into a vehicle or ground support segment.

Not only do vehicles have to meet these requirements, but their interfaces as well. Noted in the standard are the following interfaces:

NASA defines systems as a composite of equipment, subsystems, skills and techniques capable of performing or supporting an operational role. A complete system includes related facilities, equipment, subsystems, materials, services and personnel required for its operation to the degree that it can be considered self-sufficient within its operational or support environment. Interfaces with equipment are applicable as well.

The SMC Standard SMC-S-008 has been developed using parts of several other known standards in an effort to maintain a testing familiarity and to establish known testing parameters for space applications. The most common referenced testing standard is MIL-STD 461, and its current version at revision F. This standard is specific to radiated and conducted emissions, as well as radiated and conducted susceptibility.

Also included in the SMC Standard SMC-S-008 is MIL-STD 464A, which references electromagnetic effects requirements for systems. This standard and MIL-STD 461 are specific U.S. government issued and maintained documents. Other non-government standards are also referenced for specific tests. These include IEC 61000-4-2 for electrostatic discharge and RTCA DO-160 for lightning effect requirements.

The standard established acceptable EMI safety margins. The purpose of these requirements is to make sure that over the expected life of the device or system the intrasystem and intersystem electromagnetic compatibility is maintained. It is applicable to all equipment. Table 4.3.1 shows the allowable limits dependent on test.

Table 5.1e-1 shows the requirements for ground equipment based on MIL-STD 464A, and based on formal testing under the procedures and set up found in MIL-STD 461F.

Space equipment standards are established with guidelines for tailoring. This is a unique aspect to the standards, as certain tests can be modified, changed, or interpreted to fit the basic condition of the requirement. It is formally defined as the process by which the requirements of a standard are adapted (that is, modified, deleted, or supplemented) to the characteristics or operational requirements and the item under development. This aspect allows a test program to be established that does not re perform or duplicate tests previously performed or incorporate the use of analysis to determine the electromagnetic compatibility issue to be addressed. It also allows for the addition of tests that are considered normally outside the scope but address a unique aspect of a test plan. The tailoring process does not constitute a waiver or deviation.

Space systems consist, for the most part, of existing and modified equipment combined with some new equipment. The diversity of the missions (launch, communication, weather, navigation, remote sensing, exploration) and equipment, plus the unique approaches of the contractors, makes tailoring of standard requirements mandatory. Many requirements addressed in SMC-S-008 include self-tailoring but this does not necessarily alleviate the need for additional tailoring. For example, some requirements may not be applicable to particular equipment and occasionally there is no safe and effective method of verification of a given requirement for a unit or subsystem. Furthermore, program risk is reduced by establishing more stringent requirements in the beginning when equipment and system characteristics are not yet fully known. As the characteristics become better defined requirements may be relaxed, consistent with acceptable program risk level.

Applicability of Requirements, Verification Methods and Tailoring Methods are defined in Table 1.2.2-1. This table spells out testing that has been established as either A: applicable, L: limited, P: procurement specified, or X: same as a high level application. The formal definitions are referenced below.

A (Applicable): Applicable to all equipment for all procurements unless specifically tailored out by the program procurement documentation. “A” is used only in the Table not in the text: unmarked text follows the applicability of the primary Requirement title and unmarked titles are the same as being marked “A.”

L (Limited): Applicable only to special classes of equipment (e.g., receivers and transmitters) but otherwise applicable to that equipment for all procurements unless tailored out. Used in Table and for portion marking text.

P (Procurement-specified): Applicable for a specific program only if specified in program procurement documentation. Used in Table and for portion marking text. If the title of a Requirement is marked (P) and a paragraph under the title is also so marked it means that the paragraph must be levied specifically by the procuring authority to be applicable to the program in addition to levying the primary Requirement.

For the purposes of this standard, the applicable requirements are broken down into specific section and further into sub sections:

A detailed modified breakdown of Table 1.2.2-1 requirements is shown in the tables in this pdf.

Auxiliary EMC conditions are also addressed in aerospace applications. Lightning, for example, has long been a concern for space systems. Space Equipment and vehicles are not required to pass a direct lighting strike but only indirect lightning effects as referenced in the DO-160 standard. NASA has determined that lightning is a great concern and has provided for lightning protect at the launch facility itself. NASA has special developed lightning detection equipment to insure that any potentially unsafe lightning phenomena is identified and measured.

A new lightning protection system for use at Kennedy Space Center’s launch pad 39B consists of three towers – each of which will be 181 meters (594 feet) tall. Cables will then be strung between the steel/fiberglass towers encasing the smaller Ares I booster in a cage of protection.

Similar, smaller systems have been used for other missions in the past. For the Apollo launchers the protection system was built into the launch structure. Obviously this was less than ideal since lightning strikes could still damage the rocket and electronics.

For the space shuttle there is a lightning mast atop the launch pad’s service structure. The system diverts lightning strikes down two wires keeping the current away from the shuttle. By building these towers completely apart from the launch pad, NASA expects to minimize delays to the launch schedule.

Additionally, NASA has established the On Line lightning Monitoring System (OLMS) to determine if any hardware has been damaged as a result of electromagnetic energy from a nearby lightning strike. This system measures electric field strength in volts per meter as well as magnetic field, line voltage, and current measurements. The OLMS monitoring system has sensors located in specific potentially sensitive areas as well as a portable sensor that can be located at a specifc location for a specific event. 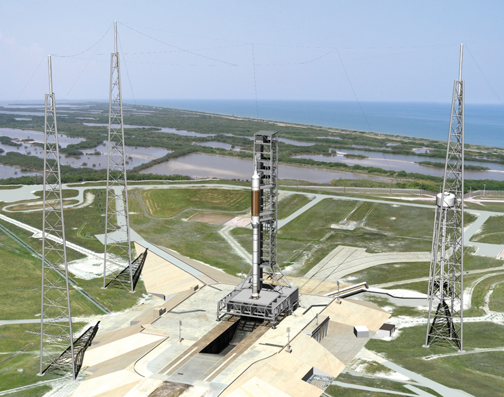 An example of a fixed sensor location would be the payload umbilicals that lead from the launch tower to the spacecraft. A current sensor is usually used for this purpose. Differential voltage probes are connected to selected pins on electrical junction boxes. These sensors can continue to operate and record data even through a launch.

NASA assesses satellite vulnerability by the use of equipment and systems that are integrated into an RF Detection and Collection System, (RFD/CS) to determine the potential for harmful radiated electromagnetic fields. Utilization of monitoring systems combined with equipment analysis ensures minimal unnecessary retesting while maintaining high confidence level of meeting stated EMC requirements. The RFD/CS is an instantaneous frequency measurement receiver assembly that can process signals between 0.5 and 18 GHz up to 200 volts per meter. 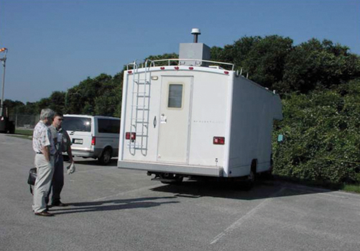 EMC is also a concern when transporting equipment such as a satellite to a launch site. NASA has long been concerned with localized high intensity radiated fields and has taken steps to address this issue by incorporating the use of special shielded containers or vehicles for the transportation of equipment. To insure the RF shielding levels of these containers NASA has placed RFD/CS in those containers to confirm safe levels of potentially harmful interference. Route surveys are also performed to confirm interference levels prior to movement. 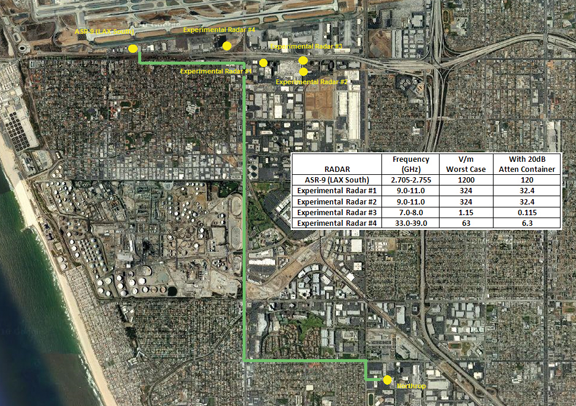 Example of route maps (courtesy of The Aerospace Corporation)

Examples of Sensors (courtesy of The Aerospace Corporation)

Summary
EMC is an important consideration for aerospace reduced electronic equipment. A standard has been developed to address all aspects of electromagnetic compatibility, and has referenced testing requirements to those found in MIL-STD 461, MIL-STD 464, RTCA DO-160, and IEC 61000-4-2. Also noted is the ability to tailor specific requirements to meet those requirements specific to the application and not to retest or over test equipment as well as the use of analyzation to confirm compliance to requirements. Furthermore, NASA has taken additional steps to identify and address potentially harmful phenomena such as lightning or high intensity radiated fields.

Jack Black is the Business Development Manager for D.L.S. Electronic Systems, Inc. a compliance testing laboratory and consulting organization located in Wheeling, Il, and has published several papers and articles in the area of EMC and EMC- related requirements, testing, materials, and compliance. He can reached at jblack@dlsemc.com. 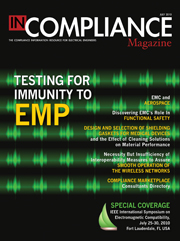