Nearly every product that has some sort of electronic circuitry must be subjected to EMC testing prior to its commercialization. In the automotive industry, the large number of electronic modules, sensors, and cable harnesses, many in safety-critical systems, in modern vehicles demands strict standards for reliability and security under challenging conditions. Vehicles must comply with standards such as CISPR-25 and ISO 11451, and individual regulations from the automakers which, very often, are even more stringent.

The contemporary mass consumption market means that the development of a new vehicle must be finished quickly to remain competitive. This means that all the steps, from the initial drafts and sketches to the final prototype tests must be performed quickly and efficiently. Vehicular EMC tests in particular are critical, but can be daunting for project management, since the costs associated with the laboratory measurement are high. A one day measurement in a typical semi-anechoic chamber that can accommodate vehicles can cost tens of thousands of dollars. Adding together the costs of logistics and overall prototype construction, a single vehicle EMC evaluation test can reach hundreds of thousands of dollars. By comparison, the costs associated with electromagnetic simulation software licenses and hardware are much less expensive. The use of electromagnetic simulation to address EMC problems, when possible, can be highly attractive from an economic viewpoint.

Though the complete substitution of real world EMC tests with simulations may be still years ahead, the intensive use of virtual evaluations in a smart way can help engineers understand causes and effects that would otherwise be impossible to address with pencil and paper and very costly to investigate with measurements. Especially in the initial development phases, the correct identification of EMC problems can be very cost effective, by avoiding scenarios where e.g. a harness has to be moved somehow after the complete car is already in production. Figure 1 shows the trade-off between cost of modifications and the stage where eventual modifications take place. The earlier problems are identified, the better. Recalls, the ultimate late-stage modifications, are nightmares that not only dent the company public image but also bleed its budget since a large scale replacement has to be publicized and provided. Figure 1: Curves describing the impact of eventual modifications in a generic industrial project on its cost. Adapted from [1].

EMC evaluation is not only the realm of auto makers. Suppliers must also provide evidence that their products comply with the existing regulations. The use of electromagnetic simulation software by automakers and their suppliers enables an easy interchange of information, where data from the supplier can be correctly integrated in a complete vehicle model. This can be in form of an SPICE or IBIS model, for electronic circuits and modules (the latter IBIS format preserving the intellectual property since it is a behavioral description not reaching the circuit description level); near field measurements of the component or even the complete electromagnetic model.

This article aims to describe the correlation between the laboratory tests of a real General Motors car in a semi-anechoic chamber and the respective virtual testing by simulations. It is part of a large program that aims to lessen the costs in the design phase and gain further confidence and familiarity with the electromagnetic simulation2.

The Instituto Nacional de Pesquisas Espaciais (INPE) institution in Brazil has a semi anechoic chamber, shown in Figure 2, where vehicular tests can be performed. Its dimensions are 24 x 11 x 10 meters and conducted and radiated tests can be performed up to 40 GHz. A shielded box blocks signals from the outside, and the walls and ceiling are covered with electromagnetic absorbers whereas the floor is metallic. The car is placed on a turntable, which allows the vehicle to be rotated. An antenna excites and/or receives the field, depending on the type of the test. The automobile model was first processed from the original mechanical CAD file (Figure 3), so that unnecessary details could be removed to reduce the complexity of the mesh. The mechanical CAD comes from Siemens Unigraphics NX4 and the processing tool that helps remove details is the CAE software Altair Hypermesh5. This simplification is very important since it turns an otherwise intractable situation (from the viewpoint of electromagnetic simulation) into a feasible problem. Small details and parts that are not made of electrically relevant materials are removed, such as upholstery and cloth. The imported model has its chassis made out of a metal sheet, with zero thickness. It is a perfect electric conductor, which is consistent with the real world model as long as the frequencies are above the HF range. Assuming real thicknesses for the metallic chassis parts would make the simulation time much longer without any gain in terms of accuracy. The correct balance between simplification and accuracy is one of the main considerations when setting up the numerical evaluation in order to extract the best results in minimum time and least computational resources. In other words, frequently less is more when an EMC problem is tackled by simulation.

The boundary conditions were modeled as a ground plane on the floor and the rest of the enclosing walls were set to emulate the effect of a perfect semi-anechoic chamber, as shown in Figure 5. Finally, to emulate the laboratory measurement, a probe (the element that records the fields in both frequency and time domains) was placed above the dashboard, as shown in Figure 6. The measurements had the car remaining stationary; therefore the turntable was not used. 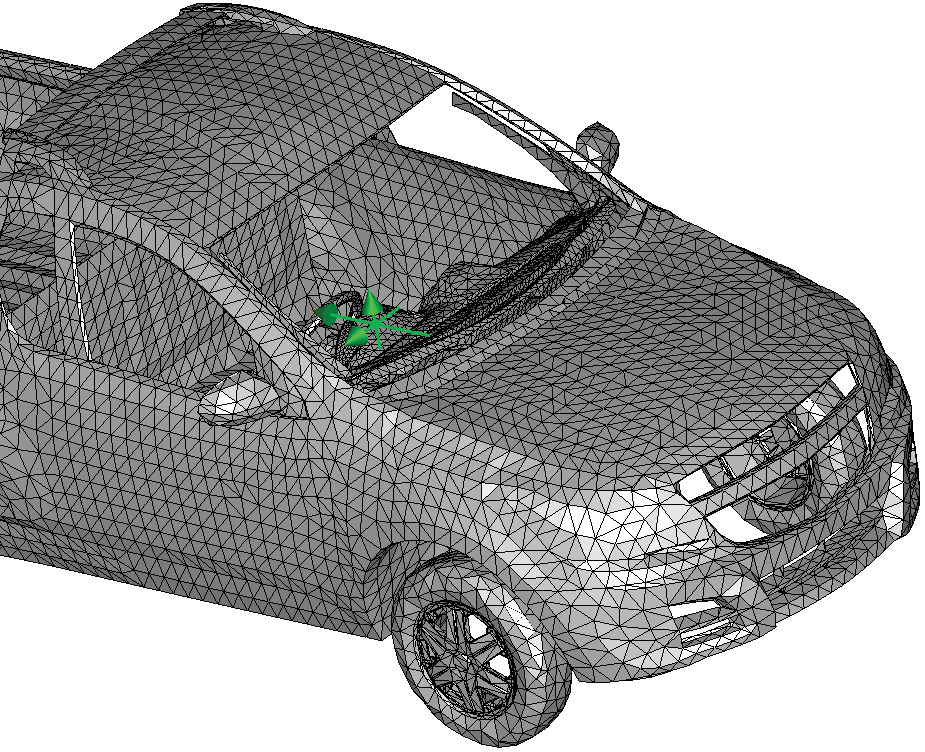 Figure 6: The green arrows show the point where the fields are recorded, at the same location as the physical probe in the semi-anechoic chamber measurement site.

The simulations were performed using CST STUDIO SUITE [2] on a desktop computer HP Z400, with 12 GB RAM memory, a 3.06 GHz Intel Xeon W3550 processor and the Windows 7 operating system. All evaluations used a transient solver with varied mesh configurations (to check the convergence). When possible, the global mesh settings were progressively refined until the results did not show any significant variation. The transient solver is well-suited to this sort of electrically large broadband simulation.

The simulations and measurements were divided into different frequency bands. Each one had an associated antenna, as shown in Table 1.

It is important to note that these antennas were roughly modeled (due to the commercial unavailability of their construction details) with an antenna design software6 capable of simulating similar designs. All presented results have the field measured by an electric probe placed as in Figure 6, and different antennas illuminating the vehicle.

Each band is addressed in the following sections. 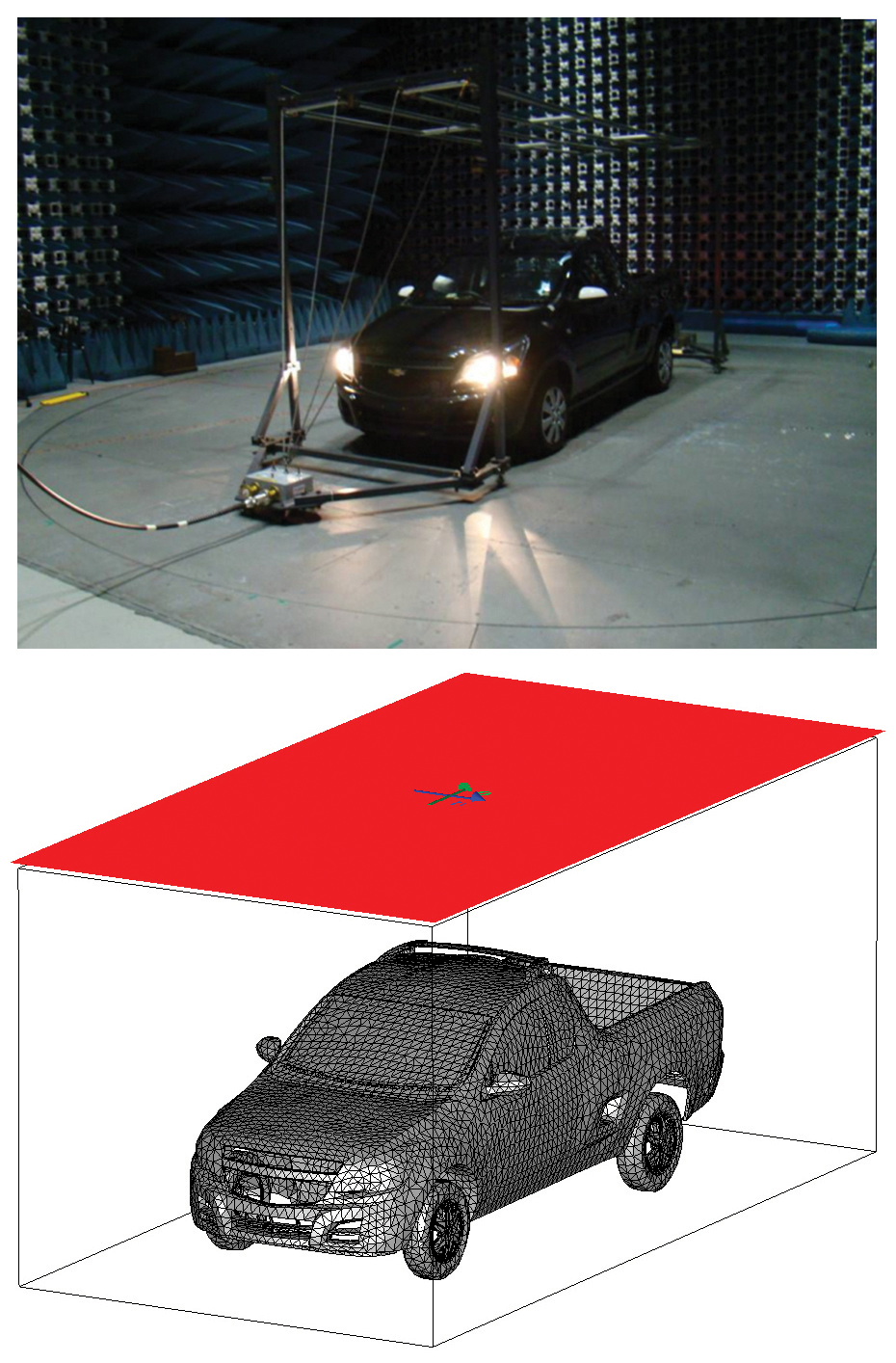 Figure 7: (Top) Vehicle in the semi anechoic chamber excited by a stripline antenna and (bottom) its electromagnetic modeling.

The comparison between the measured and simulated results is shown in Figure 8. It can be seen that there is a good agreement across the entire band, stressing the fact that the comparison uses a linear, not logarithm scale. 30 MHz to 100 MHz
This frequency range used a biconical antenna, depicted in Figure 9. Because the dimensions of the biconical antenna were unavailable, it was not possible to carry out an accurate simulation of this stage of the testing process. Attempting to simulate the test using a different antenna model did not produce satisfactory results. 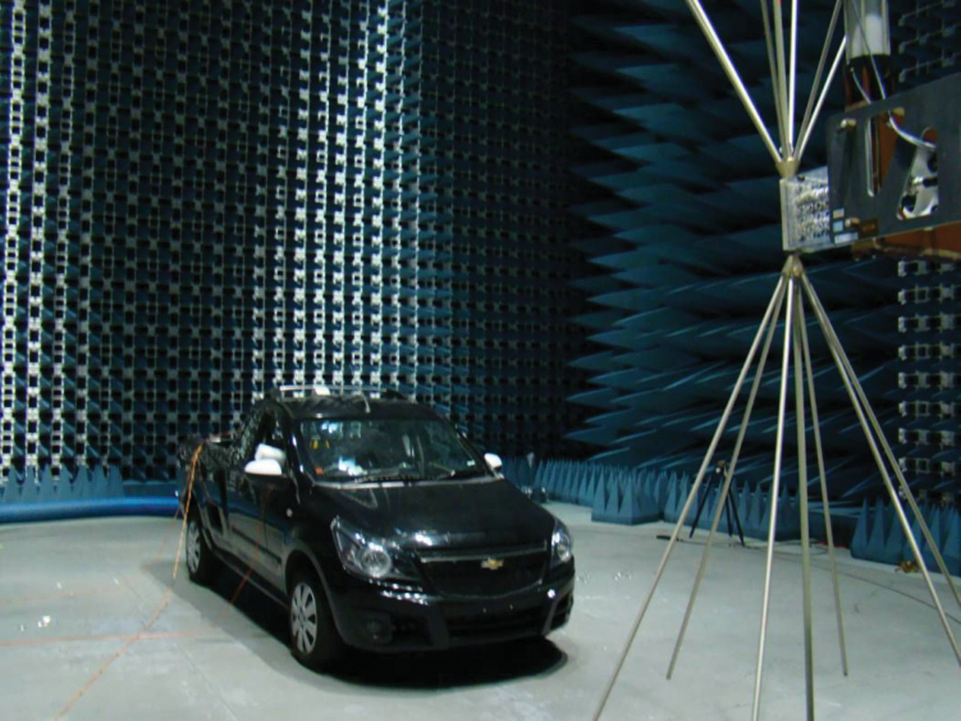 100 MHz to 1 GHz
This frequency range used a broadband horn antenna, as Figure 10 shows in the simulation and in the measurement site. It can be seen that again the antennas are not alike; the software’s model had solid walls whereas the measurement site antenna did not. In addition, the antenna design software synthesizes broadband horns with minimum frequency of 300 MHz, higher than the necessary 100 MHz, so the synthesis was done with this 300 MHz minimum frequency. Since the model provided by it is fully parameterized, the whole antenna was scaled up in dimensions as to shift down the frequency back to 100 MHz. Figure 11 shows the comparison between the measurements and simulation. It can be seen that there is a reasonable agreement between both scenarios. 1 GHz to 2 GHz
This frequency range used another type of horn antenna, shown in Figure 12 in measurement site and the simulation environment. Since the antennas were operating with a smaller wavelength (1 GHz equals to 30 cm) the fields generated by the antenna were considered to be a plane wave in the vehicle region. Therefore the excitation was again made with a plane wave. 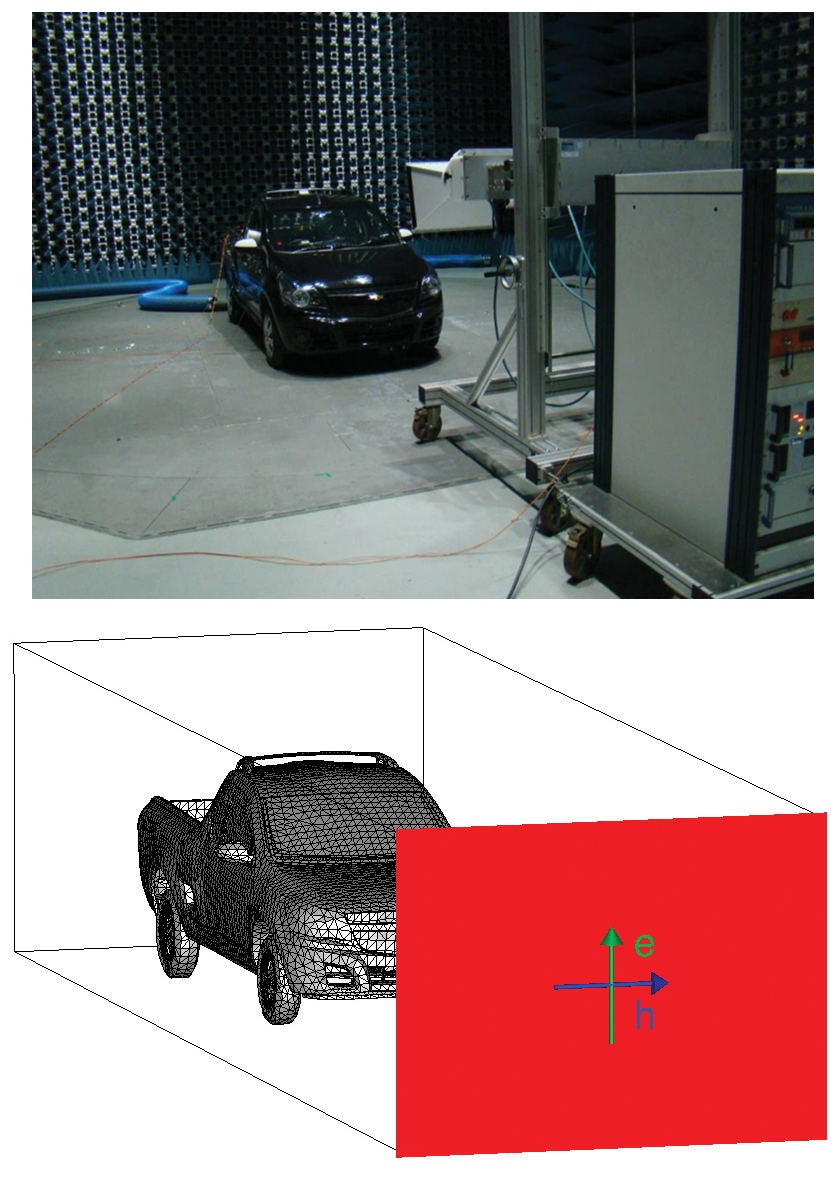 The results are shown in Figure 13. The comparison shows good agreement, in spite of the use of a plane wave instead of the antenna in the simulation setup. 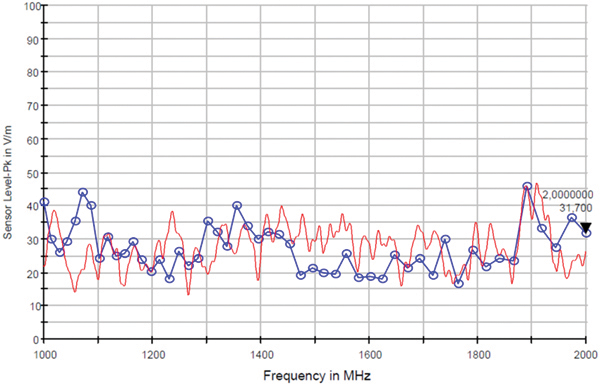 This study proved the feasibility of a large scale set of semi-anechoic chamber vehicular measurements prognostication. Using an average equipped computer it was possible to see and forecast measurement results that are very costly in terms of budget and logistics. The process could be made more efficient in the following ways:

Michel Gavião was born in Poços de Caldas, south of Minas Gerais, Brazil, on April 19 in 1978. He graduated in Control and Automation Engineering at Federal University of Itajubá, and concluded the MSc in Electrical Engineering at Federal University of ABC.His professional experiences includes the AFL and Leoni (automotive suppliers), and also Peugeot Citroen, Volkswagen and General Motors. His special fields of interest include electromagnetic modeling and simulation, EMC testing and automotive electrical development.

Marcelo B. Perotoni is native from Porto Alegre, Brazil. He is Electrical Engineer (UFRGS, 1995), holds an MsC (USP, 2001) and PhD (2005) in Electrical Engineering. He spent one year as research assistant in Colorado University, Boulder, US, and was a post-doc at TEMF, Darmstadt, Germany. Currently he is a professor at UFABC, Santo Andre, Brazil, and is interested in Applied Electromagnetics, Microwave and EMC.
Alvaro B. Dietrich is a professor at UFABC, Brazil.