When debugging designs or making electrical measurements of noise, especially ESD, we often assume the only equipment in the room that works perfectly is our measurement equipment. This assumption can be wrong and when it is, the bad data that results can add significantly to the time needed to get to the cause of a design problem. Examples of ESD interference to oscilloscopes are described and one innovative approach to minimizing EMI induced error is shown.

Figure 1 shows an attempt to measure a waveform associated with an ESD event using a high bandwidth analog scope many years ago. Almost every engineer or technician trying to make such a measurement in that time frame obtained a plot like Figure 1. The plot was taken using a 1 GHz bandwidth Tektronix 7104 analog scope with a camera mounted on the scope to capture the waveform. The 7104 was the last of the analog scopes in general use just before digital scopes became fast enough to take over most lab measurements. 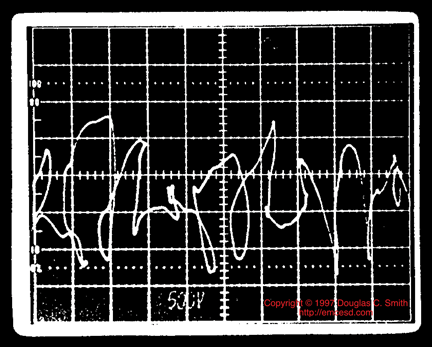 Figure 1: Example of ESD Induced Error in an Analog Oscilloscope

In the plot of Figure 1, time appears to go backwards! What really happened was that the very strong fields generated by the ESD simulator interacted directly with the electron beam in the oscilloscope, overriding what the scope deflection systems were trying to do. The result drove the electron beam all over the screen, resulting in the strange waveform in the figure. People quickly learned to put these scopes in a Faraday Cage when making ESD measurements. The Faraday Cage shielded the scope from the ESD generated fields, and the desired waveform was obtained.

These days we use digital scopes with solid state displays that don’t use electron beams the way analog scopes did, but it is still possible to get EMI induced error in scope measurements. One example can be seen in my Technical Tidbit article September 2004, Mobile Phone Response to EMI from Small Metal ESD. One of the figures from that article is reproduced in Figure 2. 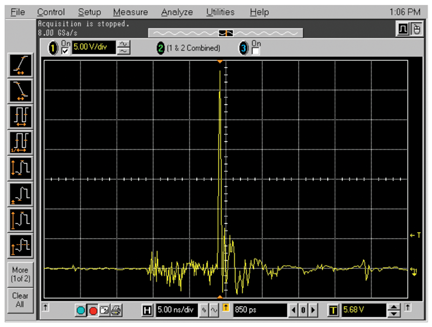 The plot in Figure 2 was the voltage induced into a small dipole antenna tuned to about 1800 MHz in response to jingling coins in a plastic bag. The desired signal is the tall spike in the middle of the plot. But notice the “hash” noise starting about 10 ns before the spike. This noise traveled over the direct path through the air from the ESD events into the scope electronics. The hash starts earlier because the propagation time is faster for the air path than through several feet of coax cable the desired signal had to travel through. To fix this and similar problems one can use a Faraday Cage around the scope or simply move the scope further away from the source of the EMI, jingling coins in this case.

Figure 3 shows one solution by a friend of mine, Jon Barth of Barth Electronics in Boulder City, NV, to the problem of ESD interference to his scope and PC while trying to measure the calibration waveform of an ESD simulator. ESD noise was getting into the connection between his PC and the scope, making data acquisition nearly impossible. The copper tape and aluminum foil shield did the job for him and is much simpler to implement quickly than a Faraday Cage. 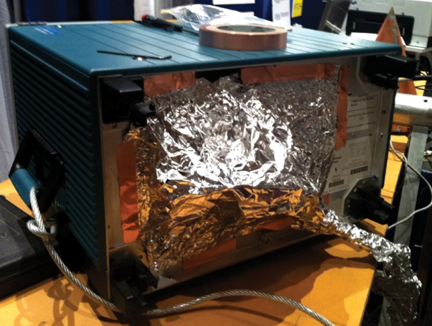 EMI can manifest itself in other ways as well including crosstalk between scope channels when trying to measure a high amplitude signal and a small one on different channels at the same time. I have even seen, back in the early 1990s, a scope change its state because its control circuits were not immune to the effects of ESD. The results of this problem were quite evident though so there is little danger of bad data from this cause.

The effects of EMI on analog and
digital scopes are quite different, but in both cases, significant measurement error can occur if care is not taken.
Don’t assume your measurement equipment is working perfectly, especially around ESD. Be on the lookout for error creeping into your measurements. 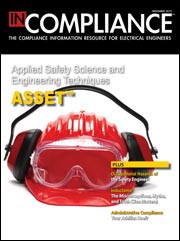