The story of the multi-burst flash begins with Karl Berger, a professor of high voltage engineering at ETH Zurich. He was known as the “father of lightning research” for his pioneering observations at the lightning-detection station on Monte San Salvatore from 1943 to 1972. His work is important because early on it showed that a lightning flash consisted of a burst of a first stroke followed by several subsequent strokes, all spaced a few milliseconds apart, as illustrated for example in his 1967 paper [1].

One possible reason goes back to the observation by Bodle et al. in 1976 [2] that,

“For design tests of the lightning withstand capability of plant items and associated equipment, both in the communication and power industries, a single large impulse is employed. This is an ‘equivalency’ type of test dictated by practical test considerations. Experience has indicated, however, that this is an acceptable simulation of actual field exposure, which includes multiple component strokes.”

So what Bodle and his co-authors are saying is that, yes, we know about multiple component flashes, but multiple-surge testing isn’t needed because single large-burst testing works well enough. That would probably be true if they were testing gas tubes or carbon blocks, which were the main types of surge protection devices (SPDs) used in 1976.

What We Miss, and Why Multi-Surge Burst Testing Needs to be Done

So what do we miss by testing with a single large surge, or multiple but widely-spaced surges spaced (which looks like a series of single surge tests)? If we’re testing switching SPDs (e.g., gas tubes or thyristors), then there may not be a problem. But there could be with clamping SPDs because clamping SPDs, especially metal oxide varistors (MOVs), can have a long thermal time constant. Long thermal time constants can cause heat accumulation in an SPD subjected to a multi-surge burst (possibly including continuing current). Heat accumulation can lead to a potentially destructive temperature rise, which is what we miss when a multi-surge burst test is replaced by a single large surge, or multiple surges spaced widely apart.

Figure 1 shows an example of a lightning flash where we might expect heat accumulation to occur.

Figure 1: Example of a multi-burst lightning flash (After Rakov, [3])

For the most part, the multi-burst flash work on clamping SPDs has been done on MOVs, because MOVs have a long thermal time constant. Due to the long time constant, the energy deposited in a MOV from one of a series of closely-spaced surges might not dissipate before the next surge arrives, allowing energy to build up. The same is true for silicon-based devices but to a lesser extent because the thermal time constants for silicon devices are shorter than for MOVs. So we’ll concentrate on MOVs; and for an illustrative example, the application of MOVs to the protection of DC feeds to remote radio heads (as discussed in [6]).

Since we’re interested in heat accumulation, we need to look into thermal modelling. Due to the non-uniformity of the material of an MOV, current tends to concentrate in a relatively small conduction channel in the MOV. In the study of Sargent et al, analysis of the failed MOV samples showed cracking and a formation of new amorphous material near the conduction channel. Examination of this amorphous material suggested that local hot spots (actually, hot channels) formed when a current pulse was passed through the MOV. The amorphous material in these hot spots likely resulted from a plasma formed during the current pulse, which rapidly cooled afterward due to heat conduction to the surrounding ZnO grains.

The results of Sargent et al suggest that the criterion for failure of an MOV is a localized temperature rise to 1000o C (or the vicinity thereof). So, for an MOV under consideration, we need to determine if a localized area might reach 1000o C. To do that we begin with a thermal model, as shown in Figure 2. 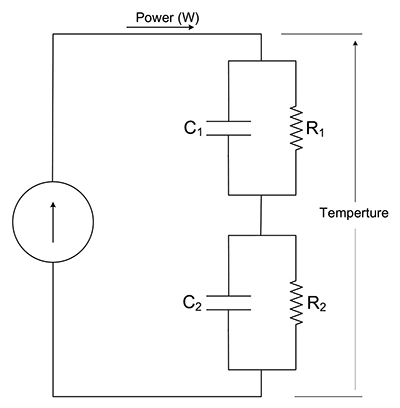 From the electrical circuit analogy, we can write the thermal impedance Z(ω) as

(R1 and R2 being the thermal resistances) 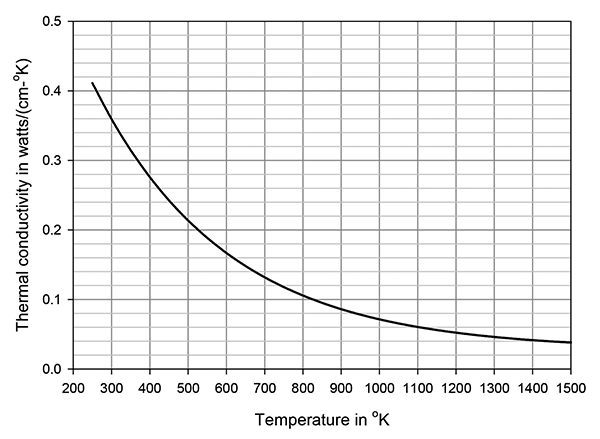 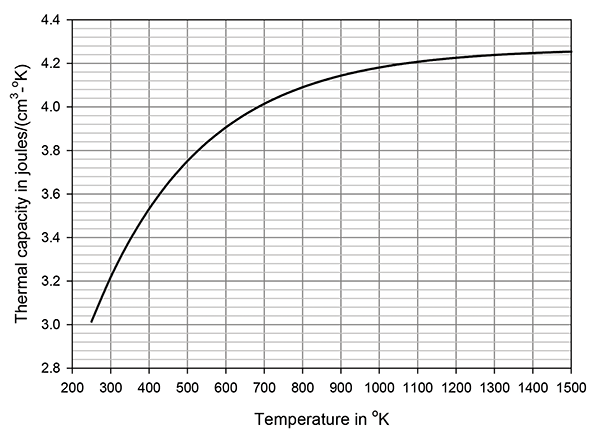 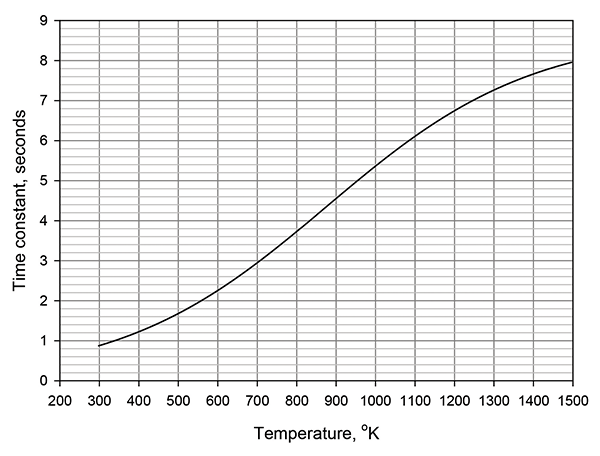 Computing the Temperature Rise of an MOV for Single Surges

Referring to Figure 2, assume the power W(t) is given by:

Where Ip is the peak current of the surge, and Vmov(i) is the MOV voltage as a function of current.

In the frequency domain equation (2) is

The temperature rise T(ω) is then

In the time domain, T(t) is

As an example of a temperature-rise calculation, consider the protection of dc feeds to remote radio heads (RRH), a prominent application for MOV SPDs discussed in [6]. Suppose we have a tower 80 m tall having a RRH 48 V DC feed we want to protect against lightning. For lightning, assume a flash which has a downward leader and negative polarity, since about 90 percent of all lightning is of this type. It characterizes ground flashes and flashes to towers generally less than 80 m tall. A typical flash of this type is composed of three to five strokes, with typical interstroke intervals of 30 – 60 milliseconds. It might also contain continuing current and, in some cases, initial current.

Let’s be conservative and assume a lightning flash with five percent probability of occurring. Then from CIGRE TB549 [8], the amplitude of a first stroke is 80 kA and the action integral (i2t) is 5.5×105 A2s. If we assume a double-exponential waveshape, the corresponding time to half peak is calculated to be 120 µs. The rise-time is generally not correlated with the duration, and from [8] could reasonably be anything from 5.5 to 18 µs. Assume it is 10 µs (usually results are not sensitive to this choice). The waveform we have is then an 80 kA 10/120. Using the calculations from [6], an 80 kA 10/120 strike to an 80 m tower will result in a 17.5 kA 10/63 surge on the DC feed.

It appears that a 25 mm MOV rated at 20 kA with a Mcov of 130 V would be appropriate for the application, so we’ll select that. For the calculation, we need the V-I curve for this device. This curve depends on the device manufacturer, but the higher current region for a typical MOV of the type chosen is shown in Figure 6. 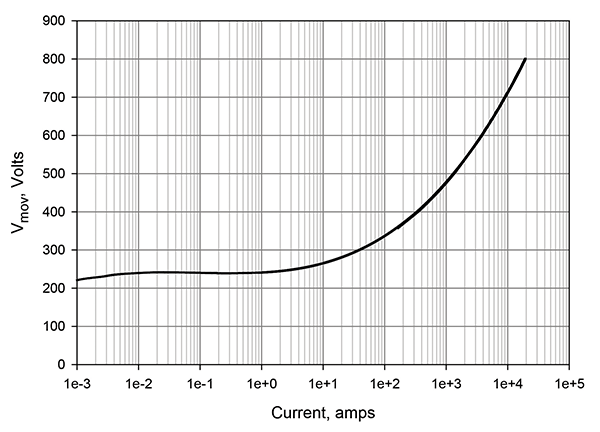 Figure 6: Variation in MOV clamping voltage with current for the type of MOV chosen

One other piece of information we need is the current vs. surge-width derating curves for the chosen MOV. In the present case, a typical set is shown in Figure 7, and an expanded view in Figure 8. 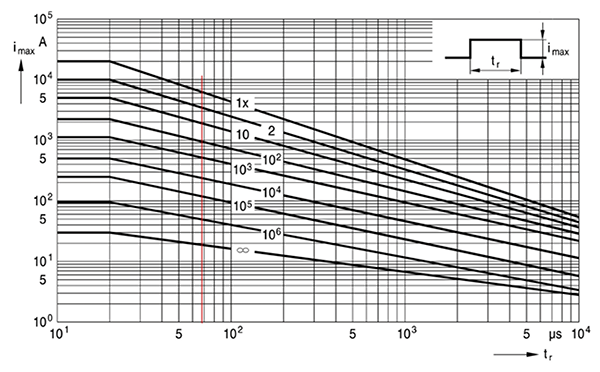 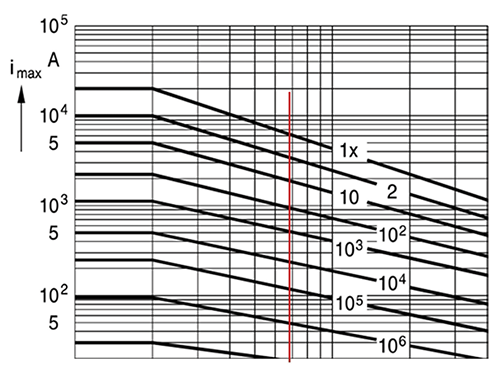 Assume enough of the devices are in parallel such that no single device handles more than 6kA. For the device considered, the conductivity and heat capacity can be read from Figure 3 and Figure 4. Figure 6 is used to calculate Vmov(i) as a function of current. Remembering that the power surge is of the form e-at – e-bt, for a 10/63 surge, a = 1.39×104 and b = 3.12×105. Then from equation (5) we can then calculate the temperature rise in one MOV for a 6 kA 10/63 surge, and plot the result (see Figure 9). 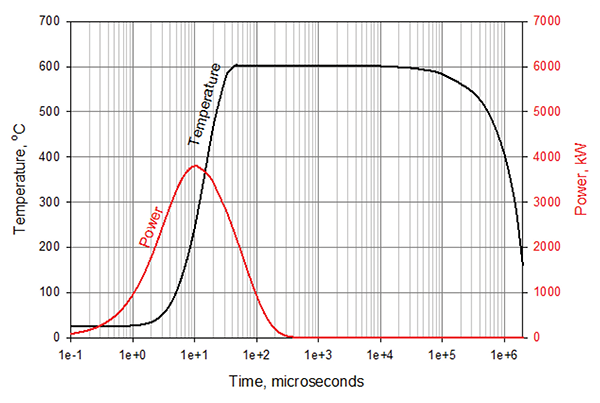 Figure 9: Example of temperature rise in a 25 mm MOV subjected to one 6 kA Ip surge 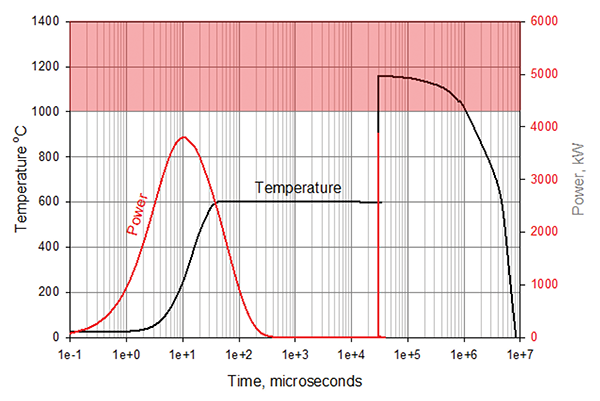 Keeping in mind that the finding of Sargent et al that MOV failure occurs when the temperature in the channel area reaches the vicinity of 1000o C, Figure 9 indicates that failure is not expected for the single-shot case considered. So, what about a multi-burst flash?

Example Calculation – the Temperature Rise of an MOV for Multiple Surges

Figure 10 shows the additional temperature rise that happens when the surge used to create Figure 9 is applied to the MOV a second time after 30 ms (the surge at 30 ms is identical to the first one, but shows up as a line due to the logarithmic time scale). The additional temperature rise is due to the relatively long thermal time constant of the MOV, which prevents the MOV from dissipating much heat energy before the second surge arrives. The temperature rise is now in the red area above 1000o C, where failure is expected. This result is consistent with the derating curves of Figure 8, which indicates that more than one surge at 6000 A would lead to failure.

Figure 8 suggests that no failure would occur for two surges of 10/63 if Imax were reduced to 3400 A which, all else being equal, would require doubling the number of paralleled devices. Calculations suggest that two surges of 3400 A 10/63 spaced 30 ms apart would result in a temperature rise of 630o C, well below the assumed 1000o C failure level. This is just an example, and what happens in an actual application depends on the relevant surge amplitude and the number of the surges.

There are many variables in this analysis, and conclusions could change depending on the assumptions used. In particular, we assumed that all surges have the same amplitude (to make it easy to use the derating curves). Generally, there would be subsequent surges of lower amplitude and duration, but assuming all surges have the same amplitude and duration as the first one is a worst-case, unless there is continuing current or initial continuing current

This calculation for an arbitrary sequence of surges and continuing current involves a lot of work, and is probably not worthwhile to do except for forensics. Forensic studies have been done, for example, that of Yang et al. [9] with comments in [10], where the issue was why a 40 kA rated MOV failed when subjected to a series of surges, none of which exceeded 26 kA, and continuing current.

Practical Procedure for Selecting an MOV

If there is no continuing current (for example the case of DC feeds to RRH considered above), the following procedure could be helpful for selecting an MOV:

With that information, the total number TL of surges expected is n times x times y.

The analysis here applies to any sequence of closely-spaced surges, not just lightning. In addition to MOVs there are also silicon clamping devices. They too can suffer from accumulated temperature effects. But silicon devices have a much different thermal time constant, a different thermal model, and a different failure mode, so that’s another story.