Printed circuit boards (PCB) are continuously getting denser, more complex and have the need to meet operating requirements at higher frequencies. In order to deal with the very high speed digital communications, designers are often forced to use differential signaling to achieve acceptable signal integrity. This however has not reduced the need to control the EMI emissions. When high speed differential signals are routed on PCBs, the intention is to make the two parts of the differential pair as balanced as possible to insure low EMC emissions and high immunity to both external and internal noise. It is well known that any small amount of in-pair skew, rise/fall time mismatch, amplitude mismatch or any asymmetry can quickly create significant amounts of common mode noise on the differential signals lines, which then increases the EMI emissions [1]. Asymmetries in the wiring channels of the differential signals can cause differential-to-common mode conversion which can impact EMC emissions and common-to-differential mode conversion which can degrade system immunity to both internal and external noise sources.

Full-wave analysis of entire boards can be very time consuming and often impossible due to the complexity, therefore analyzing simplified board designs can be helpful. Results from simple geometries can provide understanding of the underlying physics and can be used by most signal and power integrity design engineers as quick guidelines throughout the design process.

The cavity resonance approach to simulating effects between planes in PCBs has been demonstrated to be fast and effective [1], [2]. The Multilayer Via Transition Tool (MVTT) [2] was used as the primary simulation tool for this analysis. This tool is based on the cavity resonance approach and assembles each layer in multilayer PCBs to calculate overall results. It will model the power/ground plane cavities as rectangles (well-defined resonant modes) or infinite planes to avoid plane resonances that would limit the general applicability of the results to specific sized PCBs. In this study we have used infinite planes. This allows us to focus on the effects of ground vias without possible confusion from board size resonances. Figure 1 represents a cross sectional view of this model. The frequency range for which the S-parameters are calculated is 0.1GHz to 10GHz. A typical dielectric constant of 4.3 and metallic thickness of 1mil was used. The transfer function obtained between 0.1 GHz to 10 GHz from the MVTT simulations provides the amplitude of the DM-to-CM on the differential signal vias and traces. In all cases, a lower result (higher negative number) is desirable. 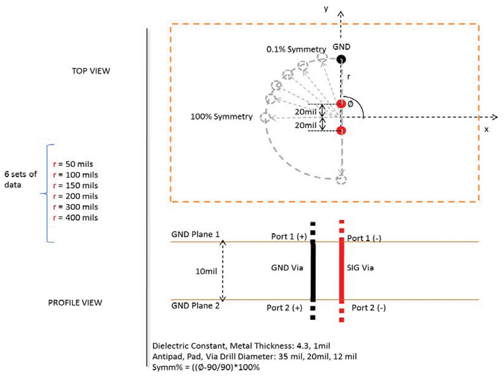 Figure 1: Layout of Models (Port 1 and Port 2 are mixed-mode ports)

Case 1: Common Mode conversion for the case of one GND via placed in the vicinity of the Diff. SIG.
As mentioned above, we wish to quantify the mode conversion from the differential signal due to asymmetric ground via configuration. The common mode noise created will exist both in-between planes [3], [4], [5] and on the Diff. SIG. pair itself. The transfer function is obtained from the model shown in Figure 1 and is used as the basis for all the different sets of models that were used for data analysis.

The distance between the signal vias that make up the differential signal is 40 mils along the y-axis. The location of the ground via (GND1) is at a distance r from the origin, and its positioning relative to the y-axis changes from model to model. As the angular positioning between the GND via and the y-axis increases, so does the percentage of symmetry by which we quantify the symmetrical configuration of our model. When the GND via is aligned with the x-axis, we say that for this case we have 100% symmetry.

In Figure 2 the different curves represent different symmetrical configuration cases (i.e. 8% symmetry would be the worst case scenario and 99.7% symmetry would be close to the perfect symmetry scenario). As expected, at higher frequencies there is more mode conversion for all cases than at the lower frequencies. The other thing to notice is that the best of the symmetry configurations also shows the least mode conversion by a significant amount. 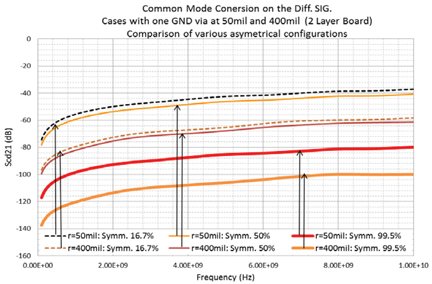 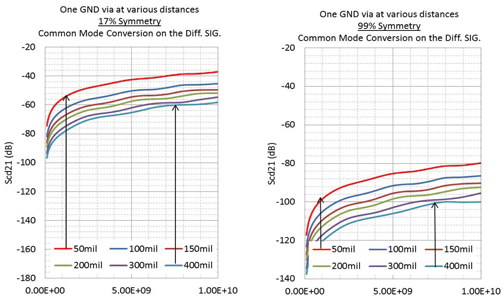 Figure 3: Mode Conversion for poor and good symmetry for various GND via distances.

Case 2: Common Mode conversion for the case of two GND vias placed in the vicinity of the Diff. SIG.
The plots in Figure 4 represent the simulation data for common mode conversion as a function of frequency and symmetry [5]. The location of the first ground via (GND1) is at a distance r from the origin, but always in line with the y-axis. While the second ground via (GND2) is also at the same distance r from the origin, its positioning relative to GND1 changes from model to model. As the distance between the two GND vias increases, so does the percentage of symmetry, by which we quantify the symmetrical configuration of our model. When both GND vias are aligned with the differential signal along the y-axis, we say that for this case we have 100% symmetry. Amongst the several values that were considered for the distance between GND vias and the Diff. SIG is the 60mils as shown in Figure 4. Common mode noise is highly reduced when the GND vias are close to perfect symmetrical configuration. The effect of the symmetry on the common mode noise as the distance between GND vias and the center of the Diff. SIG varies is shown in Figure 5. In Figure 6 where we are looking at the common mode conversion of just a few frequency points as a function of symmetry percentage. Amounts of mode conversion will vary based on the design requirements, however at 90% symmetry is where the curves show a substantial noise reduction. 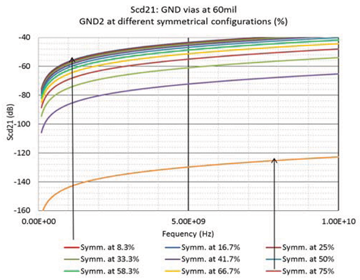 Figure 4: The effect of Asymmetry on Common Mode noise on the diff.signal 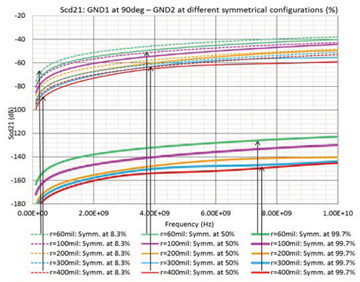 Figure 5: The effect of Asymmetry on Common Mode noise on the differential signal. Comparing different symmetrical configurations of GND vias when r varies. 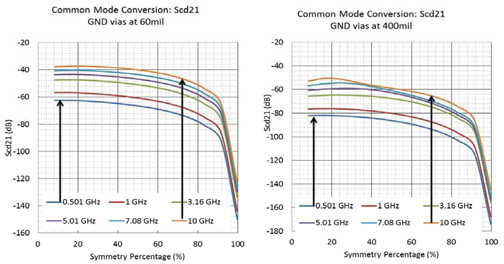 Figure 6: Differential to Common Mode conversion (Scd21) is greatly reduced if symmetry percentage is higher than 90%.

Case 3: Mode conversion as a function of the number of GND planes for the case of two GND vias
In this section we have analyzed the mode conversion on the signal via-pair as the number of reference plane cavities traversed by the vias increases (as for thicker PCBs). In Figure 7 we have looked at the best and worst case symmetry cases of the GND vias relative to the Diff. SIG. As the number of planes increases, the Scd21 amplitude starts to converge. In Figure 8 we have shown how the change in Scd21 is affected by asymmetry (worst vs. best case) as the number of reference planes changes. We have picked several frequency points, and have shown the change in Scd21 as a function of the number of planes. At high frequencies, once convergence is reached there is very little variation in the change of Scd21 amplitude as the number of GND planes increases. 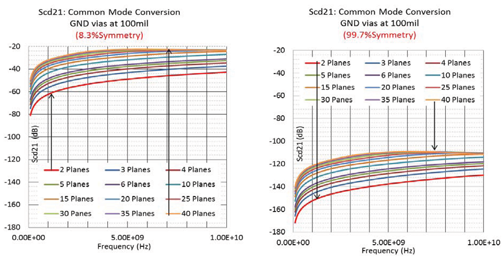 Figure 7: The effect of the number of planes on the common mode noise conversion

Figure 8: Common mode noise as a function of the number of planes through which the differential signal transitions 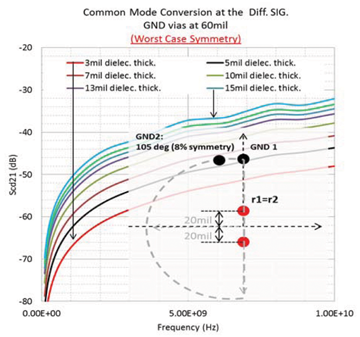 Figure 9: There is little to no change in the Scd21 amplitude amongst cases that correspond to different dielectric thicknesses.

The amount of mode conversion is not trivial! A ­40 dB mode conversion factor means that a high speed intentional signal with a 1 volt signal could have a common mode noise amplitude of 10 mV. This alone could prove to be enough to cause a system to fail emissions testing if these differential lines are connected to unshielded cables through an I/O connector.

Another important point is the difference in the amount of mode conversion between good symmetry and poor symmetry. Figure 2 shows a 60 dB delta while Figure 4 shows as much as 80 dB difference. This is very significant and can easily make the pass/fail difference in systems with high-speed differential signals.

Future work will include other ground via configurations as well as optimization studies using tools such as genetic algorithms.

© 2013 IEEE.  Reprinted, with permission, from the 2013 IEEE International Symposium on Electromagnetic Compatibility proceedings.