Low power, license-exempt FM transmitters are used in vehicles to transmit a weak signal onto a vacant channel in the FM Broadcast Band (88-108 MHz) for the purpose of receiving Sirius-XM broadcasts on the vehicle’s FM Radio. The only method for determining compliance of these transmitters according to the FCC Rules and Regulations is to measure the field strength from the transmitter installed in three typical vehicles. This article describes an alternative method for determining compliance by measuring conducted RF power output and using a transfer function derived by measuring the radiated field strength from transmitters installed in a number of vehicles.

Compliance can then be determined by applying the empirically derived transfer function to the conducted power and comparing the result to the FCC limit.1 This article also shows the validity of using a proposed tabletop measurement procedure which will achieve the same result for the fundamental emissions but which could also be used for out-of-band and spurious emissions.

A low power transmitter may be operated without an individual license, provided it is certified to comply with Section 15.239 of the FCC Rules and Regulations. For these devices, the FCC field strength limit is 250 microvolts per meter at a 3 meter measurement distance. Typically, field strength measurements are made on a tabletop at an open area test site (OATS) or other approved facility. However, since there is uncertainty as to the validity of tabletop measurements for certain types of FM transmitters, and since radiated emissions may be significantly attenuated when the transmitter is installed in a vehicle, the FCC requires measurements to be made at a minimum of three installations (vehicles) that can be demonstrated to be representative of typical installation sites.2 In other words, compliance is determined by making “in situ” measurements on three typical vehicles. However, performing these in situ measurements is a difficult, expensive, and time consuming process. Furthermore, the vehicle-to-vehicle variations which are inherent in these types of measurements make them poorly suited in terms of their ability to show compliance to FCC limits. Yet this is the only procedure currently permitted by the FCC. This article analyzes certification results for multiple products which have been tested at accredited labs over the past two years and for which the radiated data can be found on the FCC OET website. It compares those results with conducted RF power measurements for the same devices which were made separately, but also at accredited labs. As a result of the analysis, a transfer function value which takes the associated standard deviation into account is proposed. Additionally, measurements from a proposed tabletop method are also shown to be valid for the purposes of showing compliance to FCC limits.

For an isotropic radiator, the equation that defines the relationship between conducted power in dBm and radiated field strength in dBuV/m for frequencies less than 1,000 MHz is:

where E0 is the electric field strength, D is the reference measurement distance, and the value of 109.5 includes a factor of 4.7 dB to account for reflections from the ground plane.

To the extent that the actual measured field strength is lower than the theoretical value, it means that additional losses are present which are not accounted for in the equation. These losses can be due to shielding provided by the vehicle itself, by non-isotropic radiation from the radiator, or by other factors.

To account for these variations when analyzing empirical measurements, a correction factor (CF) can be added into the equation. If a statistically significant number of measurements are made, and if the variations are random, then the CF measurements may be expected to form a normal distribution around the mean. For the case where the measurement distance is 3 meters and with the term for the CF added, Equation 1 can be modified to the following:

Now rearranging to put the equation into the familiar form of a transfer function (Output (dB) – Input (dB)):

This can be visualized as in Figure 1.

From Equation 4 it can be seen that the correction factor is inversely related to the transfer function (TF) with an offset of 100 dB. Once the TF is determined, it can be used for the purposes of determining a conducted power limit. By rearranging Equation 4 and substituting the FCC part 15.239 limit at FM frequencies for the output, the following equation results:

Or if using a correction factor instead:

As mentioned previously, for in situ measurements of FM transmitters, a high CF means that either the vehicle body provides high attenuation or the radiation pattern is non-isotropic such that the E field measured at the receive antenna is lower than it would be if the pattern were isotropic. Of course, it is also possible that a non-isotropic radiator can increase the gain in the direction of the receive antenna as well. Because of the variability of vehicle shielding and the potential for non-isotropic radiation, in situ measurements of FM transmitters have an inherently high degree of variability.

The initial arrangement used for measuring radiated field strength emissions from transmitters installed in a vehicle is shown in Figure 2. The general procedures for measuring radiated emissions in situ are contained in Clause 6.12 of C63.10-20094. For certification of the SiriusXM Satellite Radio FM transmitters subject to 47 CFR 15.239, measurements were made of transmitters installed on three vehicles and at three frequencies in the high, low, and mid-band of 88-108 MHz. Currently, tabletop emissions measurements are also being requested by the FCC in addition to the in situ measurements. Sirius XM Satellite Radio Inc, has received certifications for eight products with FM transmitters since August of 2009. The data for these certifications was taken by four different accredited test labs in Virginia, Maryland, Georgia and Florida. All of the in situ and tabletop data in this article was taken from the certification data and can be found on the FCC Office of Engineering and Technology website. After being certified, conducted FM power measurements were made at accredited labs using the same products at the same FM frequencies which were used for the certifications. Since many of the in situ measurements were made at an OATS, only frequencies which were relatively free of strong ambient signals could be used. Thus, in some cases, different frequencies were used for different products. 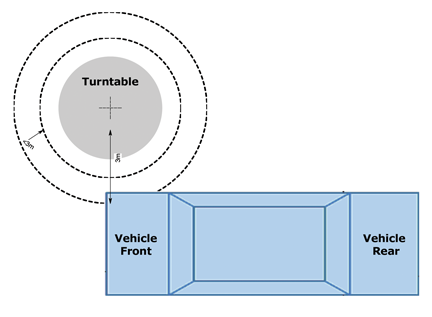 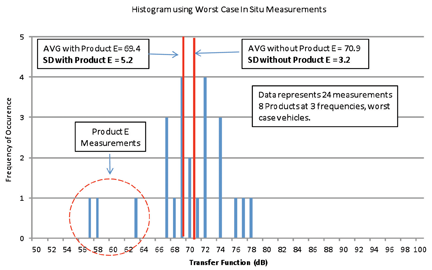 Note from this plot that ‘Product E’ appears to be an outlier. Initially, it was suspected that the data for that product could be in error, so TF averages and standard deviations were calculated both with and without the data from that product included. Using Equation 5, it can be seen that the average TF values of 69.4 (with Product E) and 70.9 (without Product E) would correspond to conducted power level limits of -21.4 dBm and -22.9 dBm respectively. The standard deviation (SD) was 5.2 and 3.2 respectively for those measurements.

It is instructive here to compare these limits with the actual measured conducted power for those certificated devices. For the eight products measured, the conducted power average, minimum, and maximum, are shown in Table 1.

From the data in Table 1 it can be seen that if the conducted power limit of -29.3 dBm is used, based on worst case measurements with Product E results removed, using 2 SD’s from the mean and assuming that the distribution is truly normal, then about half of the products that have previously been certified would not pass.

A plot of conducted power levels for the eight products that are the subject of this investigation makes it easy to see that that limit would not be valid (See Figure 4). 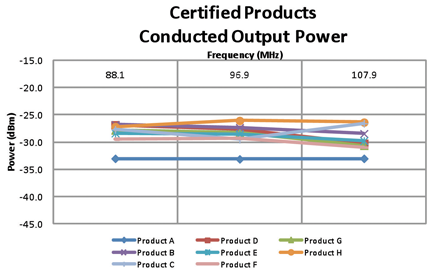 Yet as shown in Figure 5, those same products when tested in situ, despite the wide variation, all fall below the FCC limit for radiated emissions. 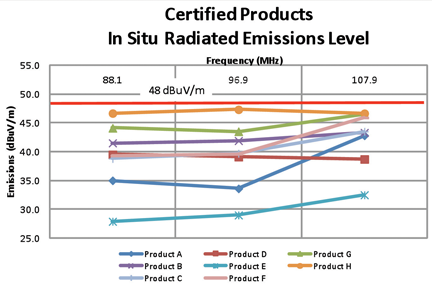 And tabletop emissions, measured as per the proposed new ANSI C63.10 procedure, pass as well, but with a tighter distribution (See Figure 6.) 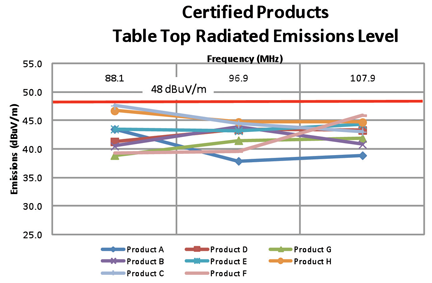 A complete table of measured conducted power is shown in Table 2, along with all in situ data and the associated transfer function and correction factor values. 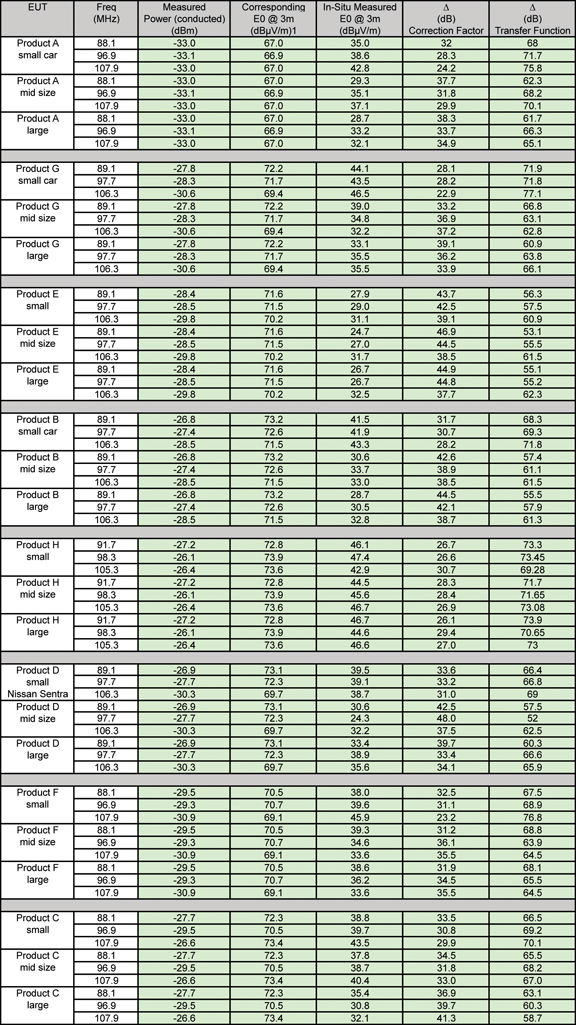 Using All In Situ Measurements

When all measurements are used instead of worst case only, the range of measurement values increases as expected. As previously mentioned, this likely reflects the fact that some vehicles provide significantly more attenuation than others or that the radiation from within the vehicle structures is not isotropic.

The in situ measurements, which represent eight products, measured at three frequencies and in three vehicles, are plotted in the histogram in Figure 7. 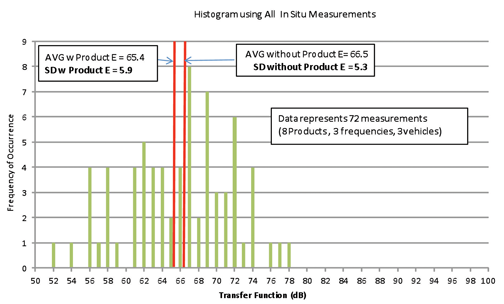 The average TF value is 66.5 without Product E and 65.4 with Product E. The standard deviation (SD) is 5.3 and 5.9 respectively for those measurements. Since Product E appears to be part of the normal distribution, it does not make sense to remove it from the data set, so it is believed that a conducted limit should only be calculated with it included. Thus, with Product E included and using the same formulas and calculations as described above, if 2 SD’s are used then the TF mean is 65.4 and the associated conducted power limit is -29.2 dBm.

The arrangement used for making tabletop measurements of radiated emissions from a device which directly injects an FM signal into a vehicle’s wiring system through the CLA socket is shown in Figure 8. The proposed method in fact is the same method that was used to collect the tabletop data for the certifications that are described in this article. All of the products utilized a method of directly injecting the FM signal into the vehicle wiring system through the CLA socket. Thus the procedure described in the ANSI draft revision for those types of transmitters was followed as closely as was possible by all of the test labs. 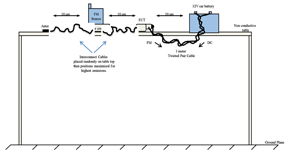 The transfer function and various other equations described above for in situ measurements can also be applied to tabletop measurements. However, it can be seen from the data that, for these measurements, the distribution is tighter and the mean is higher. This likely reflects the fact that there is no opportunity for vehicle shielding and thus less opportunity for a higher CF (lower TF).

The certification data for eight products, measured at three frequencies, is represented in the histogram in Figure 9. The average TF value is 71.8 and the SD is 2.6. Using the same formulas and calculations as described above, if 2 SD’s are used then the TF value is 77 and the associated conducted power limit ius -29.0 dBm. 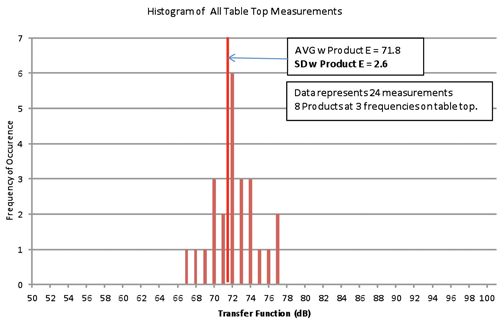 Figure 9: Histogram of all tabletop measurements

A complete set of radiated tabletop measurements, with the associated transfer functions, is shown in Table 3. 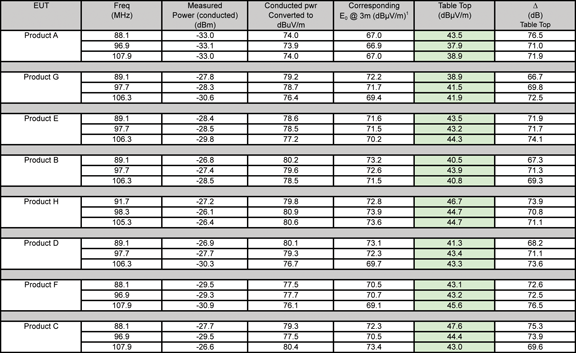 A Comparison of All In Situ and Tabletop Measurements 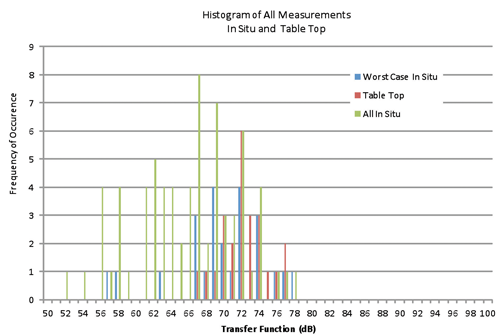 Figure 10: Histogram of all measurements in situ and tabletop

A summary of the measurements, with transfer functions and associated conducted power limits for 1, 2 and 3 standard deviations, is shown in Table 4. 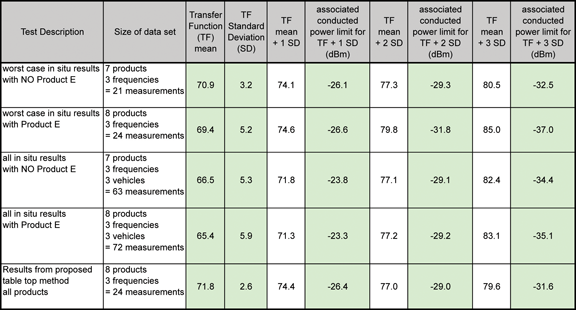 Table 4: Summary of all test measurements

Previously, it was noted that, for a normal distribution, approximately 95.4% of the values lie within ± 2 SD of the mean. From the histograms, it does appear that the data is distributed normally about the mean. If this supposition is accepted, then a conducted power limit based on the TF calculated using the tabletop method plus 2 SD’s would mean that 95.4% of the products which meet the conducted limit would also pass on the tabletop. For those products which are outside of the 95.4%, only half would be on the high side of the distribution and the other half would be on the low side of the distribution. Further, a diminishing percentage of those products would reach even 1 additional SD of 2.6 dB.

Thus, a transfer function value of 77 is proposed for the purpose of determining radiated emissions levels from conducted power levels at FM frequencies, yielding a conducted power limit of -29 dBm for the fundamental emissions. Further, it is proposed that the tabletop method, as described herein and in the ANSI C63.10 publication scheduled for release in 2012, be used to determine compliance of the out-of-band and spurious emissions to FCC limits so that in situ measurements are no longer required.