The extensive use of power electronics on vessels and offshore installations, especially on electric propulsion ships, has had a substantial impact on the power quality of the power distribution system. This article discusses the effects of current harmonic distortion created by commercial uninterruptible power supplies (UPS) being deployed in Naval shipboard applications.

MIL‑STD‑1399 300 Revision B defines the electrical interface power requirements for shipboard and submarine equipment. The current waveform test dictated by this standard provides current harmonic control limits for single phase and three phase equipment operating at 60 Hz and 400 Hz services. The measurement and control of current harmonics, especially for power electronics equipment, is essential for both on and off shore defense platforms and is also covered under the electromagnetic interference control for subsystems and equipment requirements provided by MIL‑STD‑461F test method CE101. In many instances, the measurement techniques and limits are leveraged and shared between the two standards. However, differences do exist which can lead to errors in compliance reporting if one method is used versus the other. Our purpose here is to compare the requirements of the current waveform test in accordance with MIL‑STD‑1399 Section 300B to those of the CE101 test specified in MIL‑STD‑461F. 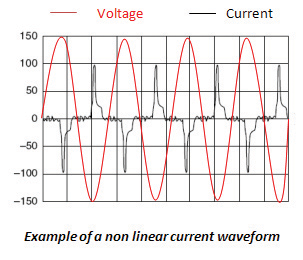 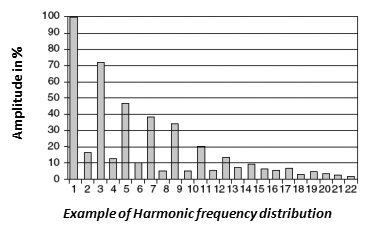 Harmonics are simply integer multiples of the fundamental power system frequency which are caused by the interaction of non-linear loads with the impedance of the supply network. Harmonic distortion can lead to heating effects on induction motors, transformers and capacitors, and in severe cases will cause operational interference or equipment damage. In theory, a generator built with perfectly distributed stator and field windings operating in a completely uniform magnetic field, connected to linear load, will produce perfectly sinusoidal current waveform free of harmonic distortion. When sinusoidal voltage is applied to a linear load (i.e., resistive or reactive), the current drawn is determined by load impedance using Ohms Law (E/R=I). In resistive loads, voltage and current will be in phase or synchronized with each other, meaning that the amount of actual power consumed by the load (true power) equals the amount of power absorbed by the circuit (apparent power). When sinusoidal voltage is applied to reactive loads, the phase relationship between the voltage and current waveforms will shift (current will “lag” voltage in inductive circuits, and “lead” in capacitive circuits). This shift in phase will negatively affect the circuit’s apparent power, requiring more current to fulfill the loads true power requirement. The ratio between true power and apparent power, or the “power factor”, is determined by the cosine of the phase angle difference between voltage and current. Reactive loads are different as they draw current disproportionately to the sinusoidal voltage. In power conversion circuits, such as a bridge rectifier in a battery charging circuit, current flows when the rectified instantaneous voltage exceeds the battery voltage, causing distortions in the sinusoidal current draw. These waveform distortions consist of frequencies harmonically related to the fundamental power frequency. Uninterruptible power supplies are commonly used for providing sufficient backup power for data and communications on board ship.

According to MIL‑STD‑1399 Section 300B, current harmonics shall be measured using a wide-band current probe or shunt in each power input line connected to a harmonic analyzer with at least 3 percent of measured frequency band width below 2.5 kHz and less than 75 Hz band width at frequencies between 2.5 and 200 kHz. During the measurement, if it is suspected that the power source has poor voltage harmonic distortion control which could be affecting the baseline harmonic currents, it is permissible to connect a linear load (no larger than the user equipment load and having the same fundamental frequency leading or lagging power factor as the user equipment to be tested) at the power interface where the user equipment would be connected. These measured harmonic current values from the linear load may then be subtracted from the harmonic current values measured from the normally operated user equipment to provide an approximation of the equipment’s harmonic current content. Ultimately, the lack of detail provided in this procedure with respect to test setup, measurement time, system verification checking, and data presentation can lead to measurement errors and/or inconsistencies. In most cases, the CE101 test method specified in MIL‑STD‑461F is used to minimize measurement errors. The CE101 measurement utilizes a highly accurate, very sensitive EMI measurement receiver versus a harmonic analyzer to perform the measurement and wide band current probes similar to those specified in MIL‑STD‑1399. One difference between how the measurements are made is the resolution bandwidth selected. MIL‑STD‑1399 specifies that at least 3 percent of the measurement bandwidth used shall be below 2.5 kHz (up to 75 Hz), and less than 75 Hz for measured frequencies between 2.5 kHz and 200 kHz. MIL‑STD‑461 specifies at resolution bandwidth of 10 Hz for measured frequencies between 30 Hz and 1 kHz, and 100 Hz for measured frequencies between 1 kHz and 10 kHz. Although these subtle differences in measurement bandwidth can impact test results, they have shown to be fairly insignificant in magnitude. Another difference between the two test methods is that CE101 requires a system verification check of the measurement system, where the current waveform test does not. System checks are standard for all MIL‑STD‑461F emissions test and have been implemented based on years of lessons learned from testing. System checks provide the tester, as well as the test data reviewer, evidence that all measurement losses and gains have been properly accounted for, while ensuring the accuracy of the overall measurement system prior to testing. No such checks are required by MIL‑STD‑1399 Section 300B, which creates a level of uncertainty in measurement accuracy at the time of test. Both MIL‑STD‑461 and 1399 recommend performing ambient measurements using linear loads matched in size and characteristics to the equipment under test. Where they differ is that MIL‑STD‑1399 permits the tester to subtract the harmonic currents recorded from the linear load ambient measurement from the harmonic current measurements taken from the equipment under test (EUT) to provide an approximation of the harmonic content. MIL‑STD‑461 prohibits the subtraction of ambient data from the test data, as this can severely affect the accuracy of the test results.

There are also several commonalities and differences observed when comparing the measurement limits of CE101 and the current waveform test. First, test limits are specified by each standard in an effort to control the amount of harmonic current a device produces during operation. These limit values are derived from physical measurements, calculated safety factors, and the expected level risk of susceptibility for new and existing equipment installed on the platform. MIL‑STD‑461 recognizes that power quality for surface ships and submarines is controlled by MIL‑STD‑1399-300A and has leveraged its limits for the CE101 test method with a few exceptions as follows:

For 60 Hz power, equipment with power ratings ≥1 kVA shall limit any single harmonic line current or current of any frequency above the 60 Hz fundamental to 2000 Hz to be less than 3 percent of the unit’s full rated load fundamental current. Additionally, currents from single harmonics or of any frequency above 2000 Hz through 20 kHz shall be limited to a value of 6000/f percent of the user equipment’s full load fundamental current, where f is the nominal frequency. 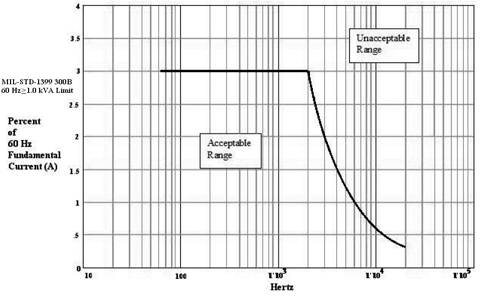 This 60 Hz ≥1 kVA current limit is similar to the MIL‑STD‑461 limit criteria for the EMI test CE101 from MIL‑STD‑461F. The CE101 limit is based on a nominal 1 amp current draw, and requires the base limit to be relaxed by the actual current draw. Therefore, where the equipment draws 1 amp or more, the 1399 300B limit, and the 461F limit align.

However, three subtle differences between the two limits exist. The CE101 limit begins at the 2nd harmonic (120 Hz), where the current waveform limit starts immediately following the fundamental frequency. The CE101 limit maintains flat to 1920 Hz, which equates to the 32nd harmonic of the 60 Hz fundamental frequency. 1920 Hz aligned with the 1399 300A limit requirements, but was changed to 2000 Hz in 1399 300B. Lastly, the CE101 limit extends to 10 kHz, which falls short of the 20 kHz limit requirement of 1399 300B. 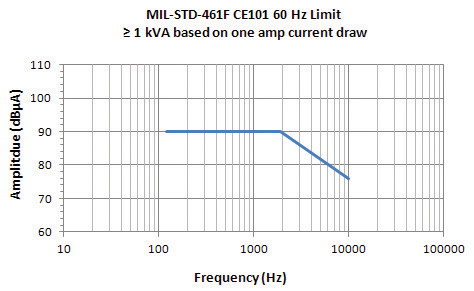 60 Hz equipment which draw less than 1 kVA, shall limit the current from each individual harmonic or from any frequency above the 60 Hz fundamental to 20 kHz to a magnitude of 6000/f percent of the equipment’s full load fundamental current, where f is the frequency. This 60 Hz <1 kVA current limit is similar to the MIL‑STD‑461 limit criteria for the EMI test CE101 from MIL‑STD‑461F. The CE101 limit is based on a nominal 1 amp current draw, and requires that the base limit be relaxed by the actual current draw. Therefore, where the equipment draws 1 amp or more, the 1399 300B limit and the 461F limit align up to 10 kHz. 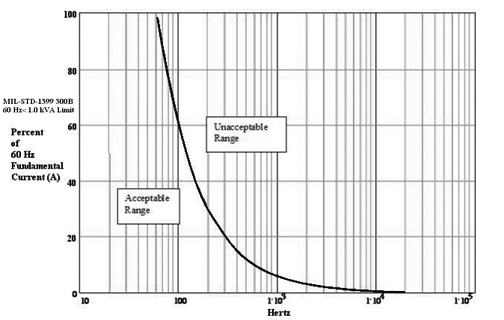 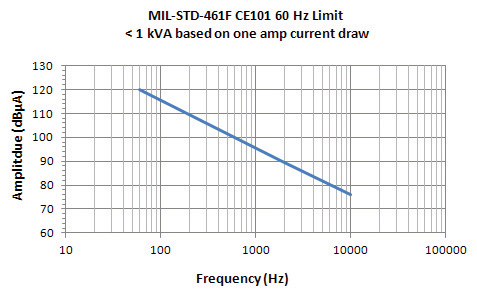 For 400 Hz equipment with a power demand of 0.2 kVA or more, the current from each individual harmonic or from any frequency above the 400 Hz fundamental to 13.33 kHz (roughly the 33rd harmonic) shall be limited to 3 percent of the equipment full load current. From 13.334 kHz through 20 kHz, the limit decays at a calculated rate of 40,000/f percent of the user equipment’s full load fundamental current, where f is the frequency. There is a similar overlapping region between this limit and the CE101 limit from MIL‑STD‑461F. However, the CE101 limit is based on 3 percent of a nominal 1 amp current draw, shown as 90 dBµA. This base limit is also relaxed by the actual current draw over 1 ampere for three phase systems, and 2 amperes for single phase systems. According to MIL‑STD‑461F, the rms current level measured at the fundamental frequency is converted to dBµA by multiplying this value by 20Log, then adding it to the limit normalized to 1 amp. 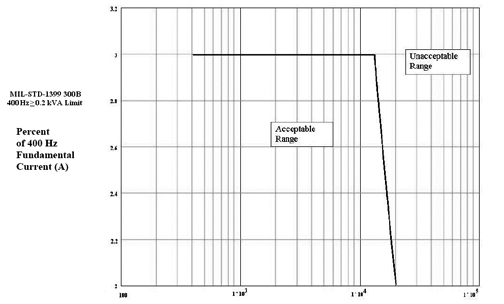 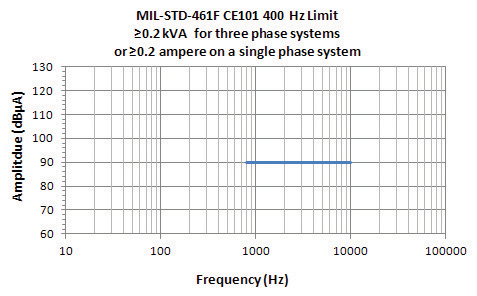 The MIL‑STD‑1399 300B does not make this distinction. The 461F CE101 limit begins at the 2nd harmonic (800 Hz), where the current waveform limit starts immediately following the fundamental frequency. Also, the CE101 limit ends abruptly at 10 kHz, whereas the current waveform limit extends to the 33rd harmonic then decays to 20 kHz as described above.

For 400 Hz equipment drawing less than 0.2 kVA, currents of any frequency above the 400 Hz fundamental to 20 kHz above the fundamental shall be limited to 40,000/f percent of the user equipment’s full load fundamental current, where f is the frequency. 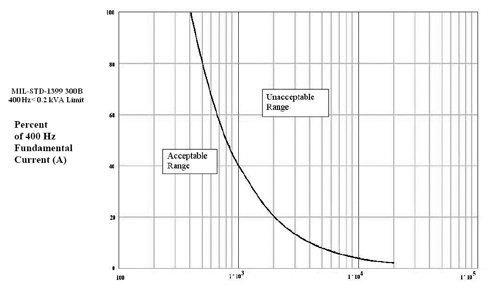 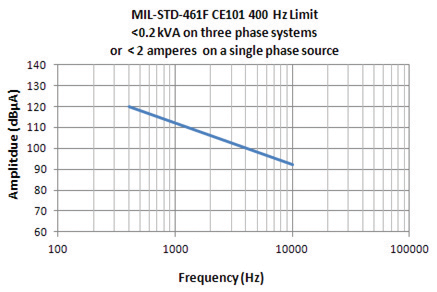 For current draws equal to or greater than 1 amp for three phase systems and 2 amps for single phase systems, the limits are similar except that the CE101 limit ends at 10 kHz. The difference is where the current draw drops below 1 amp. As previously pointed out in the 60 Hz < 1 kVA limit comparison, the MIL‑STD‑461F limits remain unchanged regardless of the equipment current draw below 1 amp, but the MIL‑STD‑1399 300B limits scale with the measured/actual current level below 1 amp. This can cause non-compliance issues with low-powered electronic equipment. NAVSEA has recognized that current waveform failures observed on equipment lines drawing less than 1 amp will pose an insignificant impact on the shipboard power distribution system and will review the data to determine if further control efforts are required. There are discussions to better align the current waveform limits with the CE101 limits in the next revision of 1399 300. 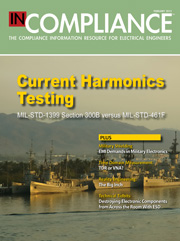