During the summer of my final year in college I returned to my home in McLean, Virginia. My pursuits at the time mainly involved hanging with my girlfriend, drinking beer, climbing ladders and pushing a paintbrush—not necessarily all at the same time.

During a down moment one Sunday, my pop, who had entered the world of EMC a few years back teaching interference control for an early industry icon named Don White, handed me a thick brown book. He said something to the effect of “this might contain something interesting for you.” It was a copy of the newly minted FCC Part 15 Rules.

The rules, governing unintentional emissions from “computing devices,” became mandatory in October 1983. The original ruling, stemming from reports of increased interference from devices, came under FCC Docket 20780. The FCC Rules were enacted to reduce radiated and conducted emissions from consumer and office products (Class B and Class A environments, respectively) and was colloquially referred to as the EMC Engineer Employment Act of 1983.

I recall that afternoon. I was sitting at my desk, no girlfriend, no beer and no painting to do, just me and this dense volume of legalese, full of pursuants, compliances, authorizations, verifications and other jargon born of The Communications Act of 1934, as amended. It was warm and sunny and the room a little stuffy and I had just finished a bowl of my grandmother’s creamy corn chowder. Consciousness began to wander away. As my nose hit the dry paragraphs, I remember slipping into a hazy dream, wondering: “who would spend their career working on this stuff?”

Well, like Rip Van Winkle, I have woken thirty years on. Much has changed. 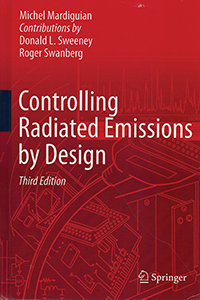 And much has been written on the subject of radiated emissions and it is with pleasure that I have been given the opportunity to review the Third Edition of Controlling Radiated Emissions by Design by Michel Mardiguian (with contributions by Donald. L. Sweeney and Roger Swanberg). Michel has written extensively on the subject of EMC and, if I’m not mistaken, this is one of six books on the subject, which have included treatises on Electrostatic Discharge, Grounding, Bonding and Troubleshooting.

As its title invokes, this particular book gets into the core of the design issues facing circuit and system engineers and runs the gamut of every contributing factor of good design: from the chip to box.  The classical radiation equations and field strength derivations provide a foundation for emissions discussions and the foundation of frequency effects is dealt with early, as a good EMC design needs to consider a good (and reasonable) upper bound as compromises are often necessary to create a producible, workable design.

Looking through a thirty-year lens, it is arguable that controlling emissions at the circuit level has led to understanding of signal propagation and management, now embodied as its own discipline known as Signal Integrity.  In other words, the techniques for controlling emissions have led to successful implementation of higher speed designs. The author touches on trace matching and impedance control, so essential for efficient propagation and signal, and hence, EMI control.

The fundamentals of this are discussed in the opening chapters of the book wherein the critical Fourier equivalents of time-domain sources are discussed. This builds understanding of the techniques necessary to control emissions at the chip level, including bypass capacitor selection and implications for frequency dependence.

Interference control design is about layers. The next layer in the design of a well-considered electronic system is the enclosure. Here, we extend out from the circuit board. Assuming we’ve done all we can at the PCB level, there will (almost) always be some need for shielding—even with the most effective designs. Here, Shielding Effectiveness (SE) is introduced, which is a measure of the attenuation of an EM energy by some form of barrier.

This book gives the essentials for proper implementation of cable shielding and cable filtering, with a discussion on critical effects of frequency on slot size and good selection of shielding gasket materials to control slot radiation. Predictions, using straight-forward but fair estimates of total Shielding Effectiveness  are provided, including a quick calculation of cables SE based on the transfer impedance Zt, which is a measure how much voltage gets generated inside a shield due to a current induced on the outside (Zt -> 0 is ideal).

Controlling Radiated Emissions by Design opens with an explanation of the need for interference control measures, namely the surge in the proliferation of electronic devices in the three decades since the first FCC Rules were off the press. The volume closes with a survey of the most recent test requirements for consumer, industrial, military and aerospace equipment. As standards are constantly evolving, a web page link is provided, which features the most up-to-date information on versions and editions.

Practical to the end, the final chapter discusses strategies for dealing with out of compliance equipment, a daily occurrence in the life of an EMC test engineer.  Supplemental information is offered in the Appendixes, which give more study to the mathematics of the radiation issue, should the reader wish to pursue more of the analytics behind the prediction methods.

Controlling Radiated Emissions by Design is highly accessible, gives many practical examples (no less than forty numerical applications to illustrate and underscore successful design measures) and uses enough theory to give insight into the why of design, without overwhelming the reader with esoteric math. The book contains nearly two hundred tables and illustrations that highlight applications of control measures.

This is a great reference for the practicing EMC engineer as well as the novice who needs reference and design coverage of this subject within a single volume. 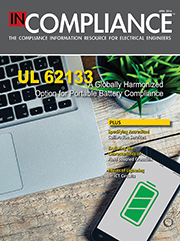