The reality: Digital (and all high-speed, high-frequency spectra) circuit board are always coupled to chassis!

Of all the “myths” and “realities” in the description of systems and system-product implementation, possibly the most controversial (and least understood) is founded on the topic of the isolation versus grounding of circuit boards with respect to conductive chassis structures. Once the topic is opened, the controversy quickly moves from grounding as single-point versus multi-point. Since the concept originates with the field-transfer (coupling) relationships between circuit board and chassis, that is an appropriate place to start examining the controversies and their related processes.

Viewing the detail of circuit board construction, a sequence of patterned layout inductance is established by layout details, including routing patterns and “Swiss-cheese” through the ground and power planes. The routing patterns and “Swiss-cheese” effect setup a form of distributed inductance. When common-mode electrical currents are impressed across these holes and patterns, electrical potentials occur as a sequence of losses. These potentials are the beginning of electromagnetic waves and their related impedances. In effect, a distributed transmission line process is immediately formed with inductance patterned in the circuit board and distributed capacitance between the board and any conductive chassis plane. All transmission lines, distributed or intentional, are characterized with some value of impedance.

When viewed as an impedance formed through a distributed transmission line coupled process or considered as an electromagnetic wave transfer function, circuit boards are indeed coupled to chassis planes. In terms of approximate magnitude for consideration, note that near fields (close to sources at, for example, 0.5 centimeters) with magnetic field dominance (described by sources that have low impedance and high current) will propagate in impedances below 40 ohms at frequencies below 1 GHz. These same conditions will exhibit electromagnetic field transfers below 20 ohm at frequencies below approximately 500 MHz. In light of this observation, the discussion can expand beyond the fact of coupling, to focus instead on the design consequences of that coupling. 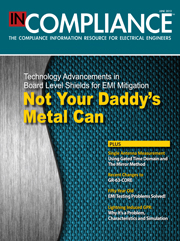