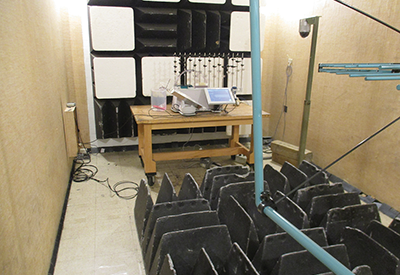 Products are becoming more complex, with one or more CPUs, multiple voltage regulators, radio systems, communications links internal and external, sensors and user interfaces. It’s getting harder to tell from the outside if an immunity test is affecting anything on the inside and, if so, by how much? A voltage regulator may drift value, the communications between two CPUs may be disrupted, a sensor reading may be offset. One or more of these things could happen and, unless the test is structured to show the effect, you may never know. The test may offset a sensor but, unless the actual sensor output plus the offset reach a point where the system registers this as an out of bounds error or it affects the operation in some other way, you may not know during the test.

In the field, however, an active sensor with a value other than what was used in the test may cause a system shutdown or, worse, cause a dangerous reaction. If a voltage regulator drifts out of spec during the test, the system may operate and appear normal but, in actual use, a different unit at a different temperature might not operate reliably. The more complex we make our products, the more detail we need in our testing.

During most radiated immunity testing under IEC 61000-4-3, the equipment under test (EUT) is placed on a table in a chamber and a radiofrequency (RF) signal is transmitted from an antenna, amplifier and signal generator. The signal generator is controlled by a computer that sets the frequency, ramps up the signal to the required level, pauses for a specified dwell time, then ramps down the level, increments the frequency to the next step, and repeats the sequence.

“The dwell time at each frequency shall be not less than the time necessary for the EUT to be exercised and be able to respond.”

Far too many tests just dwell for a few seconds at each frequency and move on. How do we know if each part of the system has had time to respond at each step unless we know when each internal process begins and ends? If a disturbance is not large enough to cause some externally visible reaction under the test conditions, how do we know if there was a disturbance?

Fortunately, there are things we can do to improve this testing. IEC 61000-4-3 also states:

“Attempts shall be made to fully exercise the EUT during testing, and to interrogate all the critical exercise modes selected for the immunity test. The use of special exercising programmes is recommended.”

If we change the test setup as shown in Figure 2, and we have software in the EUT that allows an external system to command a test of individual functions and reply with the test results, we can do a thorough test and document it.

The EUT monitor is a computer outside of the test chamber that can command tests from the EUT, and receive and log the test results. The interface between it and the EUT will depend on the design of the EUT. If there is an existing wired or wireless interface that is already part of the EUT, this can be used as the communications link and its use can be part of the test. If there is no existing communications interface, a simple fiber optic link is best because it does not alter the test setup by adding conductors. If this is not possible, a wired link can be used, but care must be taken in its design to ensure that its presence does not alter the test.

The design of the test commands is entirely up to the EUT designers. It can be as simple as just logging one test, or it could be a complete system test suite. And it could even be changed over time to implement what is needed by the project as it progresses. The test commands executed in the EUT should be designed to function exactly as they would in product code, so any filtering or error checking used in the product is also in the test code and that any filtering or error checking that is not in the product code is not used in the test code. In this way, the test will show exactly how the actual product would respond during the test. However, to better understand the effects of the RF, additional test commands could allow reading raw data to find out the extent of an RF-caused disturbance.

This cycle continues until the last test frequency is completed. The result is a complete set of test data logged in the EUT monitor, with each test cycle identified with the frequency used during that cycle. 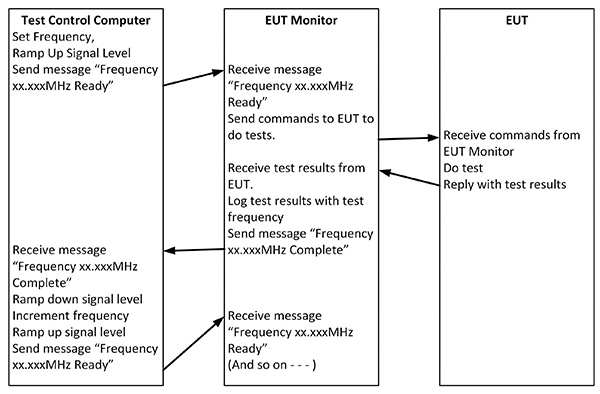 RS-232 is a good choice for the interface between the EUT monitor and the test control computer because it is simple, well-supported and understood, and there is no need to pass large amounts of data. There are just two short, simple ASCII strings, so speed and capability are not an issue.

It can be argued that a complete test of the product must only use production product code. This may or may not be true for each product. If the designers feel that this is important, the test can be run using the product code in addition to this test method. The choice is up to the product designers.

It could also be that, during testing that uses only the product code or once a product is in the field, some failure is discovered. In this case, this test method could be used to diagnose the failure, understand it more completely and test the correction to ensure it will not fail.

After an EUT has been tested and some issues are found, some additional commands (see Table 1) could be used by the EUT monitor to control additional testing and better understand the problems that have been previously discovered.

So far in this article I’ve only talked about the use of this method for radiated immunity testing under IEC 61000-4-3, but this could be used in any type of testing using a stepped frequency. This could include conducted immunity testing, strip line, tri-plate, bulk current injection, DPI or others. Any test involving a computer that increments the frequency of a signal generator while testing the immunity of an EUT could benefit from this method. Rather than use a fixed dwell time for each frequency, the same interface described above between the EUT monitor and the test control computer could control the time at each frequency and can allow the frequency to be logged with the test results.

This is not directly applicable to electrical fast transit (EFT) or electrostatic discharge (ESD) testing, but some of the concepts could be used to create a more robust test. For ESD testing, there is no test control computer but let’s say there are three points on the product that would receive discharges. The EUT monitor test sequence could be run before testing started to record a baseline, testing at point A could be done, and the test sequence could be run with the results labeled as A to B. Discharges at point B could then be done, followed by the EUT monitor test sequence and the results labeled B to C, with a final set of data collected after the discharges at point C.

Adding the interface between the EUT monitor and the test control computer described above allows more in-depth and complete testing and the possibility to document the test as it is done. But, to make this method available in commercial test labs, these interfaces need to be included in IEC 61000-4-3 and other standards. If they are not in the standards, the implementation in each test lab might be different, making it difficult or impossible to implement or use.

This is not a suggestion to make this kind of testing mandatory, there should be a switch in the software of the test control computer to allow use of the current dwell time method or a method that adds a handshake between the two computers. The testing could then be done either way.

This also does not mandate the type or depth of testing controlled by the EUT monitor, which will be defined by the EUT’s designers to fit their needs. They are free to define whatever testing is needed, how to test and the depth or completeness of testing. A change to IEC 61000-4-3 only requires documenting a standard interface and protocol between the EUT monitor and the test control computer to control and monitor frequency changes.

Chris DeWitt is an Electrical Engineer who has been involved in microprocessor-based product design since the mid 1970s, including digital instrumentation, RF location, telecom, automotive electronics, navigation and medical products. While working in Motorola’s automotive business he became involved in designing products for EMC compatibility and testing and has continued his EMC activities in the medical device industry. He can be reached at chris_dewitt@baxter.com. 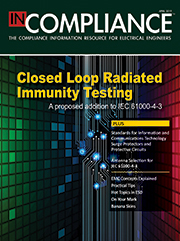