Clash of the Titans

In industry, engineers quickly realize that technical issues are but a part of any engineering problem. Making a profit at a price that the market will accept is the overriding concern. There are always compromises to be made, and ideally, the compromises are made in such a way as to yield the best possible product. But not always…

One of the processes with which all EMC engineers become familiar is product modification during or soon after EMI qualification.

If a product fails an EMI test, whatever fix is implemented must be properly documented and entered into the product drawing package so that the production line builds perfect clones of the “golden unit”. Experienced engineers realize this is a process with significant nuances.

A variation on this process problem occurs when the product installation changes from that originally specified during qualification. Ideally, the product is (1) electrically bonded to ground using the same technique during test as installed, (2) each connected cable cross-section (shield and wire configuration) is identical between qualification and production cables, and (3) cable shield terminations are the same between qualification and production, e.g., EMI backshells, length of pigtails, etc.

Sometimes even the best plans just don’t pan out, and the installation changes after product qualification. Then engineering must decide whether the change is significant or not. “Significant” means the qualification design has been compromised and is no longer representative of production. Hence, qualification must be repeated using the new configuration. Needless to say, the engineer making this pronouncement is not popular with those tasked to keep the program on schedule and under budget. The path of least resistance is to pronounce the change insignificant … at least in the short term. If the change is such that the product’s compromised performance could cause customer dissatisfaction down the line, and a recall, then it will be the engineer who pronounced the change insignificant upon whom all responsibility (blame) will fall. Those who exerted pressure upon that engineer, either implicitly or explicitly, will all have moved on to other programs and projects and will have zero memory of the affair … which was technical in nature anyway and the proper province of engineering, not management.

As a specific example, a product was EMI qualified with a particular cable set. Down the road, end-user instructions for installation were reviewed by engineering, and one or more of the attached cables was found to have a break allowing installation of instrumentation mounted on small, open boards a few inches across. Cable shields at the break were tied to local ground using pigtails a few inches long. During qualification, these cables had no breaks.

So the question was whether this change was significant, or not. Here’s where the plot thickens, because the question was posed to two different engineers, each unaware that the other engineer was working the same problem.

In general, this is not a good situation, because engineers will all have unique opinions and experiences. If the problem were sufficiently straightforward that all engineers would answer similarly, multiple engineers wouldn’t have to be polled! It is often when people are shopping for a specific answer that they will ask until they hear the answer they like.

Engineer 2 said the change was insignificant, and would not affect performance (i.e., radiated emissions or immunity).

A Test Is Worth (At Least) Two Expert Opinions

This problem is not of the “how many angels can dance on the head of a pin” variety. It is real, tangible and readily subjected to analysis and testing. Figures 1a – c show a cable segmented so as to facilitate insertion of a cable break. The cable is RG-58 coax with a single shield, which is representative of the types of shields that are used in twisted, shielded pairs and the like. Cable connectors were PL-259s, which are threaded and don’t leak. Threaded connectors were preferred over bayonet type (BNC) because those leak above roughly 10 MHz. 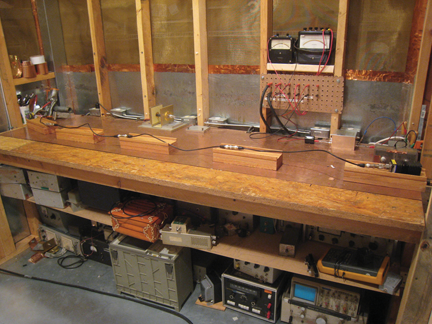 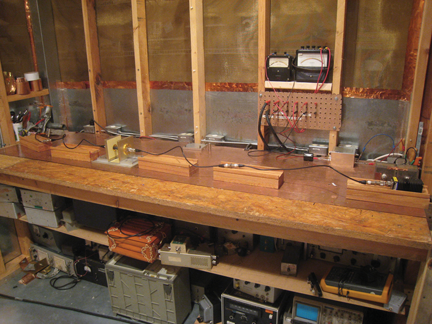 Figure 1b: Same set-up as Figure 1a, but with cable break installed at center. 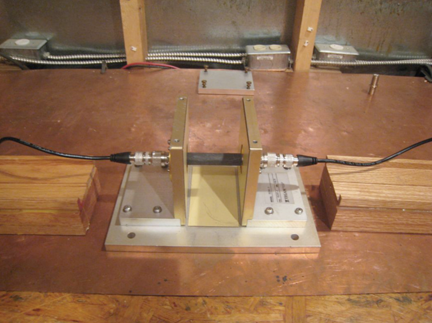 Figure 1c: Close-up of cable break implementation, showing it to be a current probe or injection clamp calibration fixture, with lid removed.

Radiated Emissions. Comparison between the continuous shield (Figure 1a) configuration and the simulated break (Figure 1b) configuration was made by taking coupling data over the biconical (30 – 200 MHz) and logperiodic (200 – 1000 MHz) ranges. Each antenna was sequentially oriented in vertical and horizontal polarizations. Instead of plotting limits, antenna port potentials induced by constant field intensity levels of 20, 40 and 60 dBuV/m were plotted as thick black curves over the data. Field intensities were adjusted to dBuV to allow juxtaposition with raw data from the measurement system.

It is intuitively gratifying that the effect of the break increases with increasing frequency. Figures 2a and 2b compare field intensities measured between 30 and 200 MHz using a vertical biconical. Near 30 MHz, degradation due to the break is minor but increases up to 30 dB at higher frequencies. The cable is driven with a conservative 67 dBuV, or about 2 mV, which is commensurate with experience. 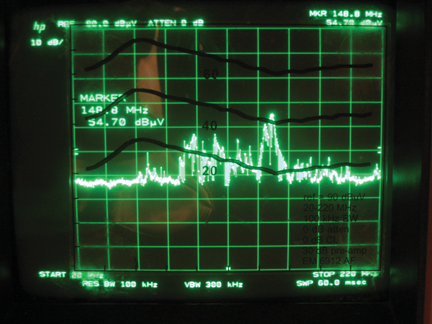 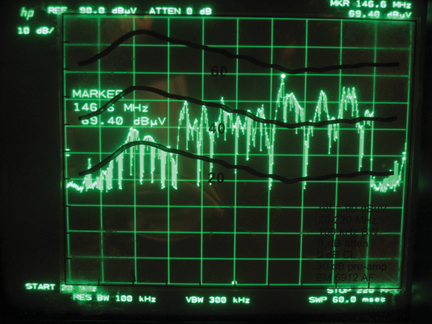 Figures 3a and 3b compare field intensities measured between 30 and 200 MHz using a horizontal biconical. Emissions increase up to 20 dB. 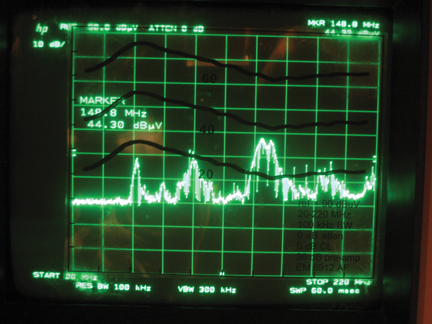 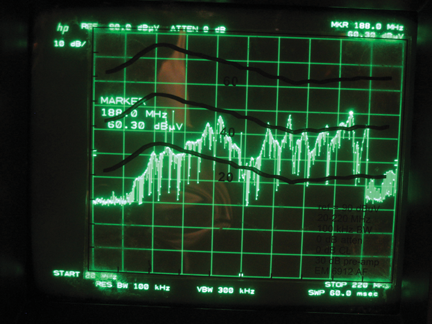 Figures 4a and 4b compare emissions from 200 to 1000 MHz using a vertically polarized logperiodic antenna. Emission levels increase from 30 to 40 dB. Horizontally polarized performance (Figures 5a and 5b) shows similar increases. 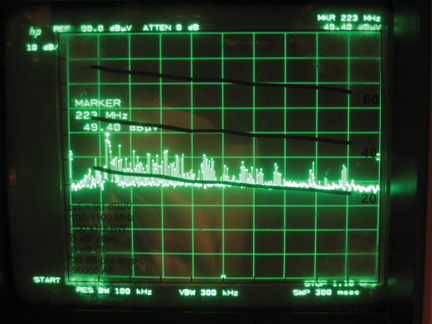 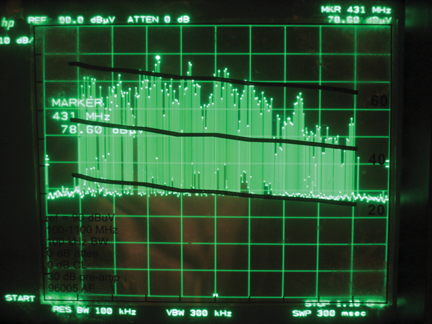 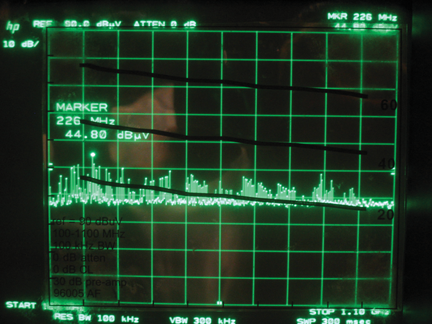 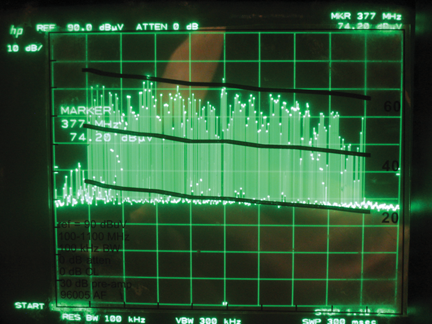 At higher frequencies, a little break makes a big difference!

A few points must be emphasized, for completeness. First, field intensities in Figures 2 through 5 were measured at one meter because a small screen room was conveniently available. Even had the small screen room been fully anechoic, measured field intensities would not scale predictably to three or ten meters, but the measured differences would be very close to the differences which would be observed on an OATS, or an OATS-equivalent enclosed absorber-lined chamber. Since an unlined chamber was used, actual degradation will frequently vary from that measured, but it is clear that the magnitude of the overall degradation is such that the signature below the limit with intact cabling will be above the limit when the cable shield is broken.

Next, the presence of a table-top ground plane reduces measured field intensity relative to when the ground plane is the floor. But it shouldn’t affect the relative levels of degradation from the shield break.

Lastly, degradation in shielding effectiveness (SE) alone is no guarantee the modification will cause a failure. The radio frequency signals have to be present within the shield before degrading the shield will result in a radiated emissions (RE) issue. It is quite possible that some or most or all of the frequencies between 30 and 1000 MHz won’t be on the wires contained in the shield. But that is unknown apriori. When making a change like this, the burden-of-proof lies with those who claim the modification won’t cause a problem. Engineers cannot, in the general case, analytically prove that the degradation will cause a problem. That isn’t their responsibility.

Radiated Immunity. As in the case of emissions, a shield break can degrade immunity performance. To simplify testing, the EN61000-4-6 conducted injection (CI) technique was applied over its 150 kHz to 80 MHz range. CI immunity degradation will be conservative relative to actual radiated immunity (RI) degradation, because the conducted technique does not illuminate the break. Even so, the degradation is quite clearly significant, as the data sweeps in Figures 8 through 10 show. The exact same cable was used for emissions measurements, with some changes to configuration. Instead of driving the cable and measuring resultant RE, the cable was connected to a spectrum analyzer, and a CI technique injected current onto the cable shield which then coupled to the center conductor via the cable’s transfer impedance. The cable’s far end, previously floating, was now grounded as per EN61000-4-6, so that at low frequencies current would flow. Figure 6 shows the far end of the cable. 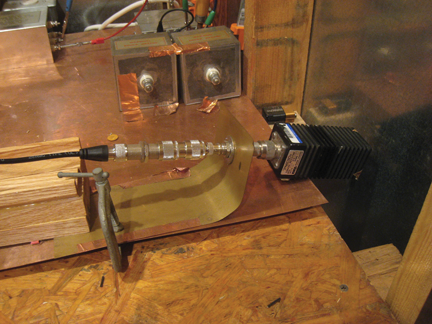 Figure 6: Close-up of far end of cable bonded to ground plane to get 61000-4-6 injected current to flow at low frequencies

Instead of maintaining a particular current or rf potential on the cable, a simpler method drove the injection device at 0 dBm constantly over frequency. Direct comparison is then possible between the cable with no break and with break.

Finally, CI testing using the current probe calibration fixture to simulate a break actually improved (decreased) coupling in the cable versus no break, because the wall and base of the fixture served as an excellent termination for the shield and the length of cable with rf current on it was less than with no break, and hence lower transfer impedance. So a better simulation of the actual installation drawing using simulated pigtails was created as in Figure 7. 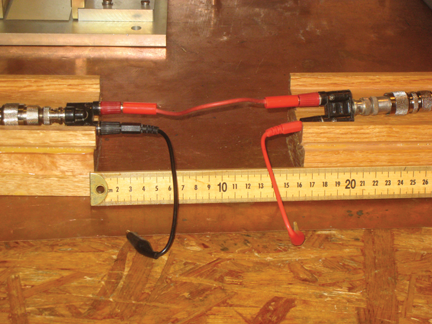 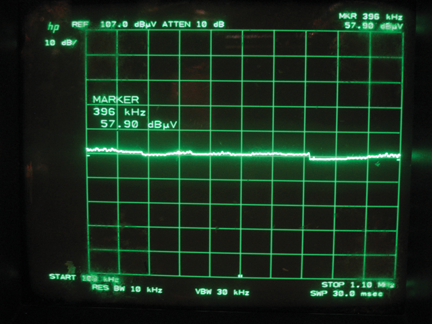 Figure 8a: Sweep from 100 kHz to 1.1 MHz with no break in cable. Injection device driven with 0 dBm. 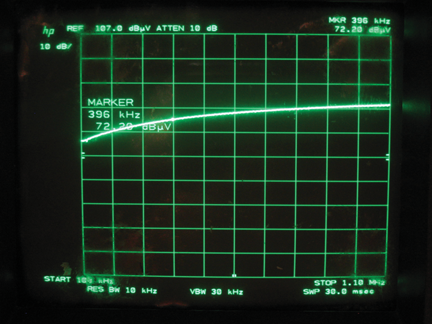 Figure 8b: Sweep from 100 kHz to 1.1 MHz with break in cable. Injection device driven with 0 dBm. 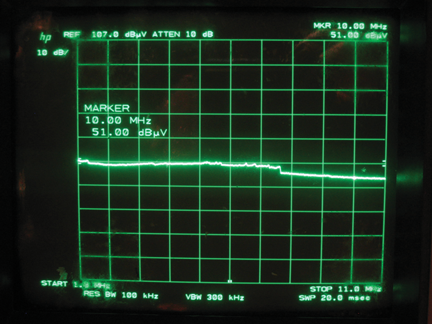 Figure 9a: Sweep from 1 MHz to 11 MHz with no break in cable. Injection device driven with 0 dBm 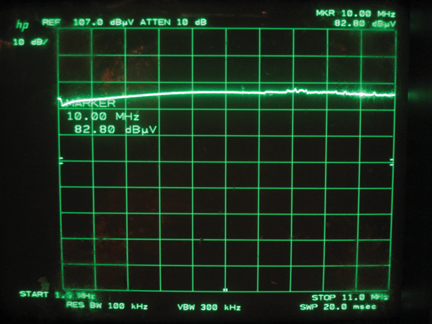 Figure 9b: Sweep from 1 MHz to 11 MHz with break in cable. Injection device driven with 0 dBm. 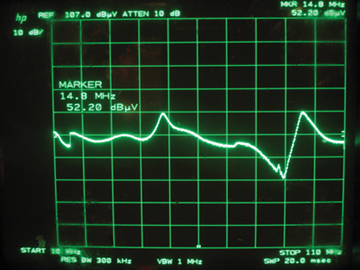 Figure 10a: Sweep from 10 MHz to 110 MHz with no break in cable. Injection device driven with 0 dBm. Discontinuity at 10 MHz compared to Figure 9a is because a different injection device was used for this band. 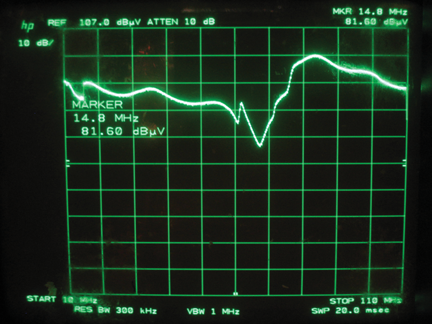 Figure 10b: Sweep from 10 MHz to 110 MHz with break in cable. Injection device driven with 0 dBm.

Note in Figures 10a and 10b that, while there is evident degradation, there are standing waves that perturb a strict “A versus B” comparison on a frequency-by-frequency basis. This is in fact the reason for cutting off the EN61000-4-6 CI method at 80 MHz, where the RI test begins.

The story painted by the data should come as no surprise to the experienced EMC engineer. Likewise, it should not be surprising that the recommendation accepted was that the change was insignificant and merited no further attention.

There are important (professional) life lessons here, the least significant of which is the technical backdrop.

Ken Javor
has worked in the EMC industry for thirty years. He is a consultant to government and industry, runs a pre-compliance EMI test facility, and curates the Museum of EMC Antiquities, a collection of radios and instruments that were important in the development of the discipline, as well as a library of important documentation. Mr. Javor is an industry representative to the Tri-Service Working Groups that write MIL-STD-464 and MIL-STD-461. He has published numerous papers and is the author of a handbook on EMI requirements and test methods. Mr. Javor can be contacted at ken.javor@emccompliance.com. 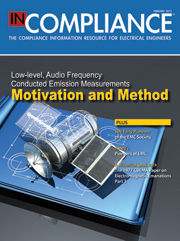