Walking on an insulative floor covering produces a predictable charge

There are very few cases in which it is possible to quantitatively describe an electrostatic charging process (i.e., the rate at which the voltage of an insulated conductive system or insulator field increases). Two important examples where this is possible, however, are the flow of a liquid such as gasoline into an insulated container or, of more interest in the electronics world, walking on an insulative floor covering—the most common way people are charged.

As explained in a previous column titled “Is Static Electricity Static?” (In Compliance Magazine, September 2013) the charging of a person by walking can be described by assuming that the contact and friction between the person’s shoe soles and the floor separates a charge, Δq, for each step. If the step rate is n steps per unit of time, this corresponds to a charging current of

The current will charge the person in such a way that the voltage, V, will initially increase at a mean rate of

where C is the person’s capacitance. The increase in voltage, ΔV, by the first step will be

The voltage will cause a decay current, id, through the resistance, R, from the person to ground:

And the voltage will reach its maximum value, Vm, when ic = id or

If the highest acceptable body voltage is Vaccep, then the grounding resistance must fulfill the condition

where Δqmax is the maximum value of the charge separated per step.

In the column cited, the maximum value of Δqmax was estimated as 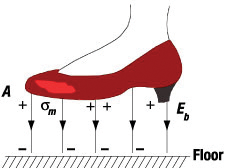 Introducing these values into Equation 5, we find that

which corresponds to a charging current of

assuming a rate of 2 steps/sec. Therefore, if Vaccep = 100 V, then R = 100 MΩ. Note that the values for an acceptable floor resistance derived from Equations 6 and 9 are conservative. It is highly unlikely that the whole area of the shoe sole would be charged to the breakdown level and that no neutralizing discharge would occur when lifting the foot.

assuming a capacitance of 100 pF for one foot. To find more realistic values for Δq and ΔV, a series of measurements of the body voltage on a highly insulative floor covering (vinyl tiles) were taken. The body resistance to ground was measured to 1011 Ω, varying over the floor from 0.5 to 1.5 · 1011 Ω. The body capacitance was 160 pF for both feet and 100 pF for one foot.

The experimental setup is shown in Figure 2. 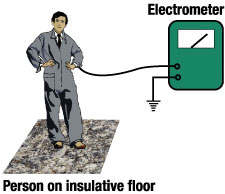 The person is connected to an electrometer, which can be run as a charge meter (high capacitance) or as a static voltmeter (low capacitance). With the meter in the charge-measuring mode, the charge for a single step was determined. As the average of 10 determinations, the value was found to be

with a standard deviation on a single determination of 0.5 · 10–8 C. According to Equation 3, this corresponds to a voltage increase for the first step of
With a rate of 2 steps/sec, Equation 5 indicates an expected maximum voltage of

With a rate of 2 steps/sec, Equation 5 indicates an expected maximum voltage of

Figure 3 shows the body voltage as a function of time. It appears that the voltage reaches a maximum of about 3.5 kV after approximately 15 seconds. The reason a person doesn’t reach the predicted maximum value of 6 kV from Equation 13 can be found in the decay curve starting at 21 seconds. At that moment, the person stands still and allows the charge to be neutralized through the effective grounding resistance. An analysis of the curve shows that the initial decay corresponds to a resistance of approximately 2 · 1010 Ω and concludes with a value close to 1011 Ω. This must mean that the resistance (or rather, the resistivity) of the floor (and sole) material decreases with increasing voltage (or rather, field strength). The direct measurement of the person’s resistance was taken at a voltage of approximately 300 V, and the measured resistance will therefore be higher than the effective resistance at the maximum voltage. 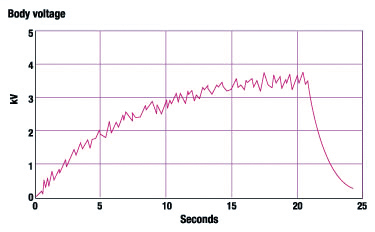 Figure 3: Body voltage of person walking on an insulative floor

The value of Vm predicted by Equation 5 appears to provide a safe upper limit for the body voltage when walking on a floor characterized by a resistance R. One problem, however, remains. According to Equation 3, the voltage developed by a single (the first) step seems to be independent of the decay resistance. Further, the value of 300 V, as predicted by Equation 12, could be a problem in many scenarios involving electrostatic discharge. It should also be stressed that Equation 3 does not account for the unavoidable decay during the time it takes to lift the foot from the floor and separate the charge Δq. If this time is Δt, then the voltage ΔV at the end of Δt can be written as 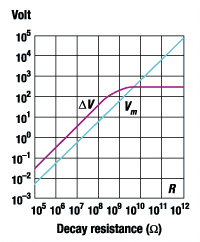 Figure 4: Maximum voltage, Vm, and one-step voltage, ΔV, as a function of the decay resistance, R

It appears that for low values of R, ΔV is higher than Vm. For instance, at R = 109 Ω (1 GΩ) the mean maximum voltage is Vm = 60 V, and the one-step voltage is ΔV = 180 V. It may seem peculiar that the body voltage after one step (rather, at the end of the first foot lift) can be higher than the mean body voltage after many seconds. The reason is that the voltage decays in the time between the lifting of one foot and the lifting of the other foot. Assuming Δt = 0.1 second and n = 2 steps/sec, this decay time is approximately 0.4 second (i.e., four times as long as the charging time).

The curves show that ΔV = Vm = 270 V at R = 4.5 · 109 Ω. The implication of the results plotted in Figure 4 is that at resistances lower than approximately 4.5 GΩ, the voltage spikes connected with a single step are the primary concern, and at higher resistances the equilibrium voltage integrated over many steps is the dominating factor.

The upper limit of the voltage to which a person walking across an insulative floor may be charged can be predicted with reasonable accuracy by measuring the person’s total resistance to ground. And again, at relatively low resistances (< ca. 4.5 GΩ) the body voltage after one step shows up as a voltage spike higher than the mean body voltage integrated over several steps. 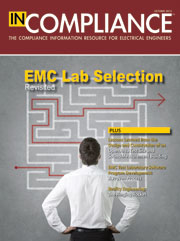