An understanding of the atmospheric electric circuit provides an insight into the processes underlying ESD events.

When people hear about static electricity, most of them think of unpleasant shocks experienced when touching a doorknob or of electronic components being destroyed because of electrostatic discharge (ESD) events. Fifty years ago, it was more likely that static electricity would be connected with explosions in chemical or pharmaceutical factories or laboratories. However, in most cases, ESD phenomena are thought of as the result of human activity. People often overlook atmospheric electricity, which by its nature is very similar to well-known static electric processes.

If a properly grounded fieldmeter is brought outside and directed upward, the meter would likely measure an electric field directed downward with a strength of approximately 150 V·m–1. If the measurement were made on a mountaintop, the field may be 10 or more times stronger. These measurements are indicative of fair-weather conditions.

If there is a thundercloud overhead, the field is usually reversed and runs easily into the tens of kV·m–1. If a horizontal metal plate exposed to the free atmosphere is connected to ground through a sensitive ammeter, it would measure a current of about 3·10–12 A·m–2. A value of 3 pA·m–2 is not much, but when it is taken for the earth as a whole, the current amounts to about 1500 A.

Although there are still many atmospheric electric processes that are not understood in detail, there is a general understanding of the atmospheric electric circuit (Figure 1 provides a simplified picture of the processes). Fair-weather conditions are shown on the left side of the figure, where a downward electric field drives positive charges toward ground. Most of the field lines start at positive charges in the lower atmosphere, and some extend all the way to the atmospheric electric exchange layer (at a height of about 60 km), the lower part of the ionosphere. The necessary field distribution is maintained by thunderstorms (or thunderclouds), shown on the right side of the figure. A thundercloud normally has a negative base and a positive top, which brings negative charges to ground. 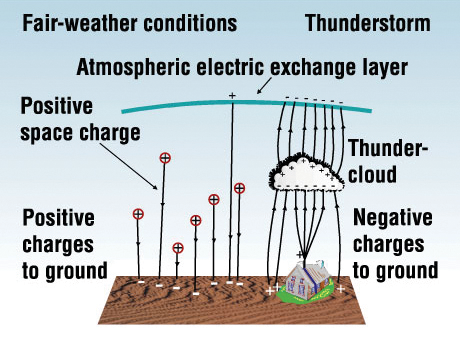 Furthermore, the values of the fields below the thunderclouds may be much greater than the fair-weather values, often 5–10 kV·m–1 as compared with a fair-weather field of 100–200 V·m–1. The greater field strength may cause corona and brush discharges from the tips of leaves and branches, not to mention lightning rods, which contribute to the total current. Regular lightning discharges also represent a certain current to the ground (primarily negative), but this contribution is rather modest. The field has the same direction above, as well as below, the thunderclouds, causing a positive current to flow to the atmospheric electric exchange layer and closing the circuit (see Figure 2 for an equivalent diagram). 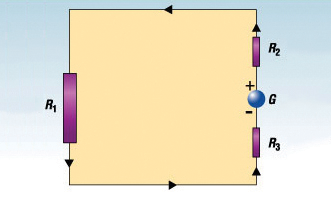 Figure 2: An equivalent diagram of the atmospheric electirc circuit

Between the exchange layer and the ground, there is a voltage difference of about 300 kV, which drives a current of about 1500 A to ground, where it is distributed over all areas with fair-weather conditions. This corresponds to a resistance R1 of 200 W, representing the parallel resistance of all fair-weather air columns. G represents the generator effect of all simultaneously active thunder systems, and R2 and R3 represent the resistances of the air columns above and below these systems, respectively.

Small Ions. By polarization, both polarities of elementary ions will bind 10–20 molecules of water around themselves (a few more for positive than for negative ions) within a fraction of a second, thereby forming small molecular clusters. These molecular clusters are called air ions, and they are almost 100% responsible for charge neutralization by air ions.[2]

Large Ions. However, any atmosphere will contain aerosol particles or condensation nuclei in numbers from a few thousand to several hundred thousand per cubic centimeter. These are particles or molecular clusters with radii ranging from 10–10 to 10–7 m. If a small ion collides with a condensation nucleus, the two may attach to form a large ion.

An air molecule may receive the necessary ionization energy from a colliding atomic particle or from a quantum of electromagnetic radiation energy. In the lower atmosphere, ions are predominantly produced by radiation from radioactive materials in the soil, in building materials, and, first of all, in the air (radon and its daughter products). Although all three types (alpha, beta, and gamma) of radiation may ionize the air, alpha radiation is by far the most important.

An alpha particle (with energies in the order of 4–8 MeV [6–13 x 10–13 J]) emitted from a decaying radioactive atom (see Figure 3) will, along its trajectory through the surrounding air, knock off electrons from oxygen and nitrogen molecules—at the expense of about 34 eV per successful collision. Cosmic radiation contributes maybe 10% to the ionization at ground level. However, at higher altitudes, the partitioning shifts dramatically both because the radiation from the soil and airborne materials decreases and because the intensity of the cosmic radiation increases.

Normally, ions are characterized by their mobilities. If an ion is exposed to an electric field E, it will move with a constant velocity v given by:

The factor of proportionality, k, represents the mobility of the ion. The unit of k is (m/second)/(V/m) = m2·V–1·s–1. Small positive ions have mobilities of approximately 1.4 x 10–4 m2·V–1·s–1, and small negative ions have about 1.8 x 10–4 m2·V–1·s–1. The difference in mobility reflects the difference in the numbers of attached water molecules in the ions. Large ions cover a range of mobilities from about 3 x 10–7 to 8 x 10–8 m2·V–1·s–1, depending partially on the nature and size distribution of the aerosol particles in the air.

An ion has a limited lifetime. It may deposit on a surface either by diffusion or by the aid of an electric field. An ion may combine with oppositely charged ions or particles and hence cease to exist as an ion, or with aerosol particles and then either be neutralized or become a large ion. This latter process usually determines the lifetime of an ion. In polluted city air, the average lifetime may be in the order of 10–20 seconds, whereas in polar air, poor in aerosols, the lifetime may be as long as 300–400 seconds.

For a current to flow in a medium, that medium must contain mobile charge carriers. Consider an atmosphere containing one type of ions with the concentration n and the mobility k,
with each ion carrying a single elementary charge e. If an electric field E is established in the medium, a current with the density j will flow in the medium in the direction of the field (for positive ions) given by j = enkE or

Equation 2 is Ohm’s law in differential form. The factor

is called the conductivity of the air, and the unit is W–1·m–1.

Usually, the ions do not all have the same mobility but are, in general terms, distributed according to some function of frequency f(k) in such a way that the concentration dn of ions with mobilities from k to k + dk is given by dn = f(k)dk. The conductivity may then be written as

Normally, only small ions contribute significantly to the conductivity of the air because their mobility is much greater than that of large ions and charged particles.

The top graph of Figure 4 shows an example of an atmospheric field strength recording, normalized to the mean value, as a function of Greenwich mean time (GMT). It appears that the field strength, and therefore the exchange layer potential, has a minimum at 3 GMT and a maximum at 19 GMT. 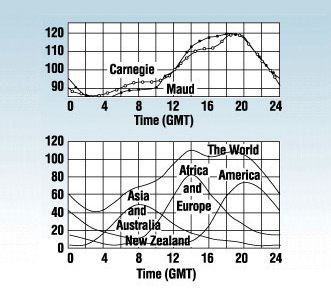 Figure 4: Example recordings of field strength as a function of Greenwich mean time.

Because the atmospheric field and potential are maintained by active thunderstorms, it is therefore to be expected that variations in the field and potential reflect corresponding variations in concurrent thunderstorm activity. Such a relationship is shown in the bottom graph of Figure 4. The graph plots areas where, at a given time, thunderstorms are active in major parts of the world. A place is regarded as having been in a thunder area at a specified time if thunder was audible in the interval from 60 minutes before to 60 minutes after that time. Although this is a rather uncertain estimate, the curve for the world as a whole does show a correspondence with the field strength curve plotted in the top graph, allowing a causal relationship to be deduced.

The effect of the ground-level field strength of 150 V·m–1 and conductivity of 2 x 10–14 W–1·m–1 is, according to Equation 2, a current to the ground with the density j @ 3 x 10–12 A·m–2. This is the fair-weather vertical current density, but this field-induced charge transport is not the only way by which charge is brought to the ground.

It has long been known that most precipitation elements, such as rain drops, snowflakes, and hailstones, are often charged. If large raindrops are falling in a strong turbulent updraft, they may split into smaller droplets. The majority of the smallest droplets are negatively charged because of the Lenard effect, that is, the breakup of the electrical double layer at a water-air interface.

A similar process may charge snow particles, but it should be mentioned that charging processes are much more complicated with solid materials. The charging involves contact and friction, and the result therefore depends on the physical state of the contacting materials (temperature, purity, origin, etc.). For example, it has been shown that when two ice pellets are rubbed against each other, the ice pellet with the higher conductivity will become negative, regardless of whether the higher conductivity is caused by higher temperature or lower purity.
The charge brought to the ground by precipitation is normally positive, averaging about 30 C/km2 per year, or about 10–12 A·m–2. The charge from precipi-tation together with the fair-weather vertical current yields a positive current to the ground of about 4 x 10–12 A·m–2, or a total current of about 2000 A to the earth as a whole.

The second part of this article on atmospheric electricity will show that the collective effects of thunderstorms are enough to balance the current brought to the ground. In addition, the physics of lightning discharges will be discussed.