Characteristics of Air as an Insulator

A few months ago, we built a clear plastic box containing a four-inch square steel plane, a two-inch diameter steel sphere, and a micrometer drive to precisely adjust the distance between the plane and the sphere.

Recently, we finally had the time to do some testing. We set the distance to a known value and then slowly applied the voltage from a hi-pot tester until the tester tripped. We repeated the process for increasing distances.  At each distance, we repeated the test at least once to determine consistency. The repeatability was about 50 volts rms or dc. (Subsequently we learned that the repeatability was related to the resolution of the hipot voltage control itself.)

We performed the test with both dc and 60 Hertz sinusoid waveforms.

Table 1 gives our test data. For ac, we measured the rms value and then calculated the peak value as 1.414 times the rms value. (We confirmed that the ac waveform was sinusoidal by observing the waveform with an oscilloscope.) The table includes ac (50 Hz) and 1.2 x 50 impulse breakdown voltages data from IEC 664. 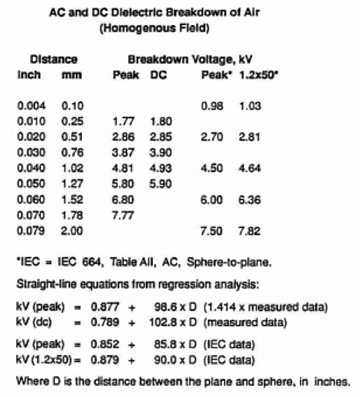 Plotting these data, we find that the ac peak and dc lines virtually overlay each other. (Figure 1) 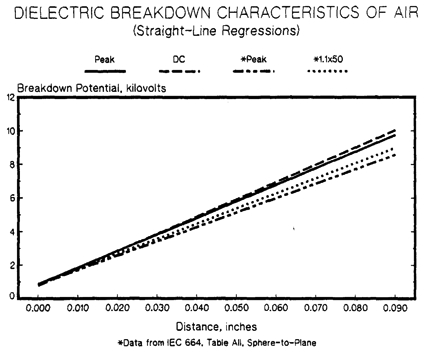 When we add these data to the graph, we find that there is still good agreement (although not as good as the ac to dc agreement) between the measured breakdown data and the lEC breakdown data. (We’ll examine the degree of disagreement more thoroughly a bit later.)

Conclusion: In air, there is no difference in breakdown voltage between dc, peak ac (either 50 or 60 Hertz), and 1.2 x 50 µsec impulse voltages.

Hypothesis: The breakdown of air is an absolute function of voltage and is not related to the waveform.

Conclusion: The breakdown of air is a linear function of the distance between the two electrodes.

The answer is quite simple: The applied voltage must be less than the breakdown voltage. In mathematical form this can be expressed:

The breakdown voltage for air, assuming a straight line, would be:

where
a is the slope of the line in kilovolts/inch,
D is the distance, in inches, and
b is the offset, in kilovolts.

Using regression analysis (a function available in many handheld calculators), we can calculate the constants for the slope and the offset. The offset is about 0.8 kilovolt, and the slope is about 100 kilovolts per inch. So, the breakdown equation becomes:

The conditions, which must be fulfilled for air to be an insulator, are:

Let’s summarize where we are.  Air, as an insulator, has some minimum voltage at which it will not break down, regardless of distance. Above that voltage, the breakdown voltage of air is directly proportional to the through-air distance between the two conductors, At any distance, if the applied voltage is less than the breakdown voltage for that distance, the air is an insulator. (Figure 2) 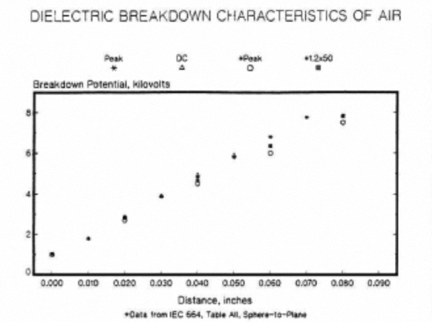 Conjecturing about Other Insulating Media

Intuitively, such characteristics should also apply to liquid and solid insulations. That is, for any insulation there is some minimum voltage at which it will not break down, regardless of distance, and, above that voltage, the breakdown voltage is directly proportional to the distance through the insulating medium. At any distance, if the applied voltage is less than the breakdown voltage for that distance, the material is an insulator.

The statement that there is some minimum voltage at which a material will not break down, no matter how thin, can be supported by the argument that if the solid insulating material is removed and replaced with air, then there is indeed a minimum voltage at which the air will not break down no matter how close the two electrodes. Therefore, a worst-case solid insulation cannot have insulation characteristics less than that of air.

Hypothesis: A material is an insulator if its breakdown voltage exceeds the applied voltage.

(Obviously, this is not a complete definition. but it is an absolutely necessary part of any definition.)

Conversely, a material is not an insulator if its breakdown voltage is less than the applied voltage.

Hypothesis: For any insulating material, whether solid, liquid, or gas, voltage breakdown is a straight line of the form:

where
a is the slope of the line in kilovolts/inch,
D is the distance, in inches, and
b is the offset, in kilovolts.

One of the current controversies is whether there is any difference in the breakdown voltage of solid insulation when the applied voltage is dc, ac, or the 1.2 x 50 µsec impulse. I›ll reserve discussion of this issue for another time.

In performing this experiment, there are a number of variables that must be controlled. The first is the shape of the electric field and the consequent uniformity of the equipotential lines. The second is the detection of the breakdown of air. The third is the measurement of voltage at the instant of breakdown.

We can achieve a perfectly uniform electric field and, consequently, perfectly uniform equipotential lines if the two conductors are planes. But, the field at the edges of the planes would be rather non-uniform, and would therefore need to be accounted for in any experiment. To minimize the field distortion; we could gradually bend one plane away from the other. This would be done along the entire periphery of one plane; the resulting surface would be a plane with a spherical periphery (what you get at the instant a basketball bounces from the floor). The size of the plane is not at all critical, since the size of the electric field is not critical. Thus, the electric field resulting from a sphere in very close proximity to a plane approaches uniformity.

We used a 2-inch diameter steel sphere at distances from 0.01 inch to 0.10 inch from the plane. The distance ranged from 1% to 10% of the radius of the sphere. The scale illustration indicates the worst-case appearance of the two conductors.

The second variable is the detection of the breakdown of air. Fortunately, modern hi-pot testers have electronic trip mechanisms, which are uniform in tripping when an arc occurs. Any trip current is acceptable provided an arc truly occurs just before the trip. This is easy to confirm visually.

The third variable is the measurement of voltage at the time of trip. Here, a digital meter can be very helpful if the voltage is increased very slowly when approaching the breakdown.

After performing the experiment and experiencing the repeatability, it seems appropriate to hypothesize why the differences between our data and the lEC data. When the lEC data is plotted point-by-point, the data agrees below 5 kV or so, and diverges seriously at 6.5 kv. This could be explained if the IEC had used a sphere where the ratio of distance to sphere radius was more than 10%. (The hi-pot tester available to me was limited to 6 kV rms and 6 kV dc, so we could not collect data as the ratio increased.) One hypothesis could he that nonlinearity can occur as the ratio increases.

At the lower voltages, the IEC data is not as precisely linear as our measurements. This could be explained by non-uniform observations of the breakdown or by poor control or measurement of the voltage. With the experience of performing the measurement, we found that these are critical to the uniformity and repeatability of the measurement.

There is still one more factor.

We chose steel as the material for the electrodes. Massive, thick steel. Whenever an arc occurs, the power dissipated in the arc can melt the metal at either end of the arc. But, with a good thermal conductor and lots of thermal mass, this is minimized. (In attempting to do the point-to-plane test, we burned up a hardened steel needle when the hi-pot failed to trip and let the arc continue for an undue amount of time.)

The other extreme is the perfectly non-uniform field and, consequently, non-uniformly distributed equipotential lines. Such a field is that resulting when the diameter of the sphere approaches zero. 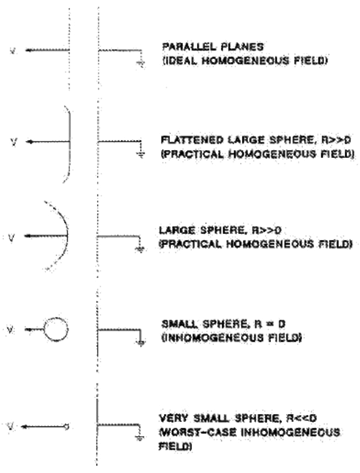 We also repeated the same test with a point-to-plane system. Immediately, we see significant differences. The first is a current indication well below breakdown. The second is lack of repeatability. The third is the slope of the line is about one fourth that of the sphere-to-plane.

First, the highly bent equipotential lines lead to partial discharge at voltages very much less than the breakdown voltage. What happens is that the air actually breaks down in the region very near the point, but not across the entire gap. This is the same phenomenon as St. Elmo’s fire and the streamers that emanate from a Tesla coil, except on a much smaller scale.

The effect of an imperfect electric field is to reduce the breakdown voltage at any given distance. The worst-case reduction seems to be about one fourth of the best-case.

What clearance is necessary to withstand 2121 volts peak? Working backwards, we find that 0.041 inch (less than 1/2 millimeter) will withstand 1500 volts RMS! This is less than one half the distance required by UL and CSA standards!

We can only conclude that the requirements for clearances in various safety standards must be based on some parameter other than that of air as an insulator.

Impetus for this investigation was triggered by my friend and colleague, Jerry Blanz, who also participated in the experiment. Jerry is with Hewlett-Packard in Fort Collins, Colorado, and sits on CSA Subcommittee on No. 220, and Working Group 2 of IEC SC28A.

The required inequality of applied voltage and breakdown voltage was provided by another friend and colleague, Joe Neshiern, Joe is with Hewlett-Packard in Loveland, Colorado. Joe sits on CSA Subcommittee on No. 231, and on the US TAG to IEC 66E. 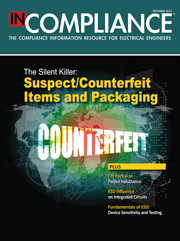