Integrated circuits are tested for their robustness to electrostatic discharge (ESD) using the Human Body Model (HBM) and Charged Device Model (CDM) test methods. Circuits which pass 1000 V HBM or 250 to 500 V CDM can be handled with high yield in manufacturing facilities using basic ESD control procedures. [1, 2] HBM is the oldest, best known and most widely used ESD test method, but most ESD factory control experts contend that the vast majority of ESD failures in modern manufacturing lines are better represented by the CDM test method. The CDM test method is intended to reproduce what happens when an integrated circuit becomes charged during handling, and then discharges to a grounded surface. 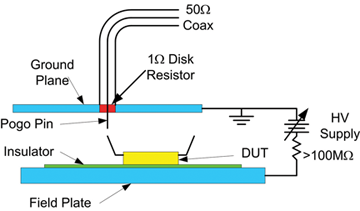 Figure 2 shows the measured peak current versus package area for a range of package sizes measured as specified in the JEDEC CDM standard with a 1 GHz oscilloscope. 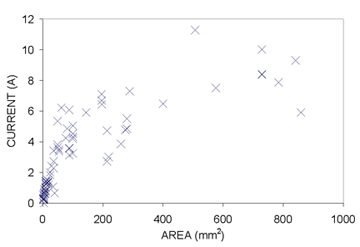 Figure 2: Peak current as a function of package size

The data in Figure 2 makes intuitive sense. As the package size gets smaller, the capacitance of the DUT to the field plate gets smaller and therefore the peak current reduces. Since peak current is usually considered to be the best indicator of an ESD event’s ability to cause damage, there has been a question in the ESD community; at what package size does it no longer make sense to test an integrated circuit for CDM? The authors, all members of the JEDEC ESD Working Group, were asked by the committee to study CDM events on small integrated circuits, and, if possible, to recommend a package size below which CDM testing was no longer necessary.

Work by Henry et al. [4] has shown that interesting features of the CDM current pulse are masked by the 1 GHz oscilloscope bandwidth specified by the JEDEC CDM standard. A sub-team of the JEDEC ESD Task Group decided to investigate the properties of small package CDM events using an 8 GHz oscilloscope in addition to the 1 GHz oscilloscope specified by the standard. [5] Figure 3 shows peak currents versus package size measured with both a 1 GHz and an 8 GHz oscilloscope. The results do not look particularly different for the two bandwidths. The situation changes if we expand the area axis to focus on the smallest package sizes, as shown in Figure 4. At small sizes the peak current is much larger with the higher bandwidth oscilloscope. In fact, an extrapolation of the 8 GHz peak current to zero area yields a value in excess of 1 A, rather than the 0 A extrapolation predicted by the 1 GHz data. 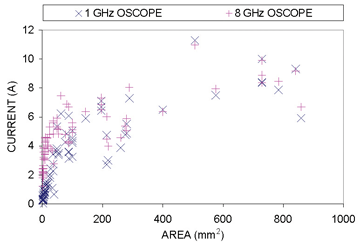 Figure 3: Peak CDM current versus package area including both 1 GHz and 8 GHz data 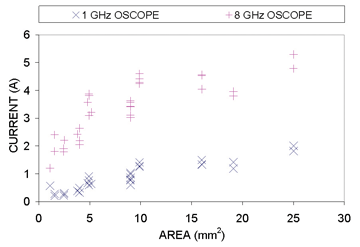 Figure 4: Peak CDM currents for very small packages measured with both a 1 GHz and 8 GHz oscilloscope

This behavior can be understood if we look at the current versus time curves for a variety of sample sizes using the 8 GHz oscilloscope, as shown in Figure 5. The decrease in peak current for smaller sample sizes is evident, but it is also clear that the width of the initial peak decreases to less than half a nanosecond for the smallest samples. This exceeds the capabilities of a 1 GHz oscilloscope. The loss of signal accuracy can be readily seen if we directly compare waveforms captured with 1 GHz and 8 GHz bandwidth. 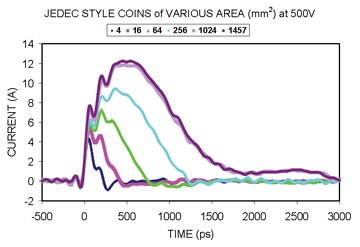 Figure 5: CDM current versus time for a variety of sample 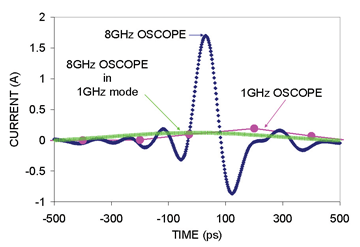 Conclusions
The measurements show that, for small packages, a 1 GHz oscilloscope is not adequate for characterizing CDM current pulses. The real peak current for small packages is several times larger than the value obtained from a 1 GHz measurement. It is not possible to exempt small package devices from CDM due to a vanishing peak current. It is true that the energy in the CDM pulse is extremely small due to the narrow pulse width, even though the peak current remains at an ampere or more. CDM damage is, however, not the result of silicon melting, as is the case for HBM. CDM damage is due to oxide breakdown triggered by high voltages that result from high currents during the brief CDM event. A more detailed circuit analysis would be needed before it would be possible to exempt small packages from CDM testing.

It would be easy to conclude from these measurements that the 1 GHz oscilloscope required by the JEDEC CDM test standard is inadequate. While this is a reasonable viewpoint, the use of a 1 GHz oscilloscope for daily equipment functionality verification is probably sufficient when using the JEDEC calibration modules which are large enough to not produce an extremely narrow pulse. For more detailed measurement, especially on small samples, a higher speed oscilloscope is recommended.

Marty Johnson returned to National Semiconductor in 2006 working in ESD device design debug and supervising the ESD Characterization Lab. He currently is supervisor of the ESD Qualification & Characterization Lab. From 2001 to 2006, he worked at Philips Electronics (Semiconductor Division) focusing on WLR and TLP characterization. During his tenure at Philips he was the corporate representative to the Reliability Technology Advisory Board (RTAB, now ISMI) and its chairman in 2004. From 1978 to 2001, he worked for National Semiconductor spanning the semiconductor reliability spectrum from basic reliability qualification through wafer level reliability to ESD and Latch-up.
He is also active on the JEDEC ESD Team (JC-14.1),
the Joint ESDA/JEDEC HBM and CDM teams and the JEDEC Latch-up Standards team. 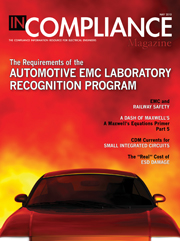