In this month’s EMC Concepts Explained, we explore the conducted immunity test known as a Bulk Current Injection (BCI) test, according to ISO 11452-4 specification [1]. This immunity test is carried out by inducing disturbance signals into the wiring harness by means of a current injection probe, as shown in Figure 1.

The injection probe is a current transformer through which the wiring harness (which forms the secondary winding) of the device under test (DUT) is passed. Immunity tests are carried out by varying the test severity level and frequency (1 MHz – 400 MHz) of the induced disturbance. The disturbance is an amplitude modulated (AM), narrowband, continuous wave (CW) carrier signal.

The calibration fixture, used in both methods, is shown in Figure 2. 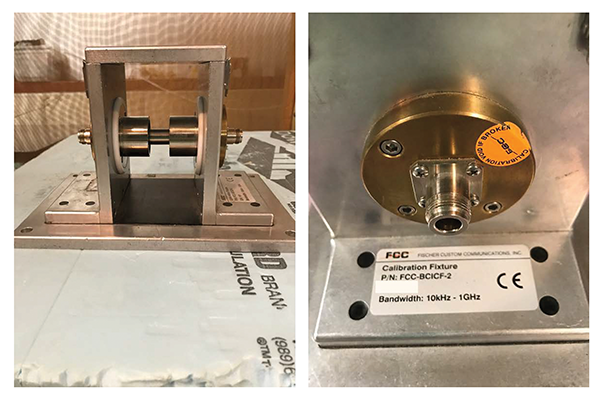 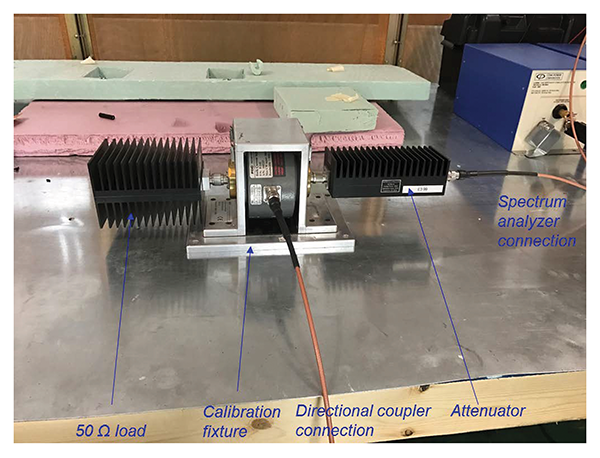 Figure 4: 50 Ω load and an attenuator

The calibration procedure (and the BCI test) is performed in a shielded enclosure, using several additional pieces of equipment shown in Figure 5. 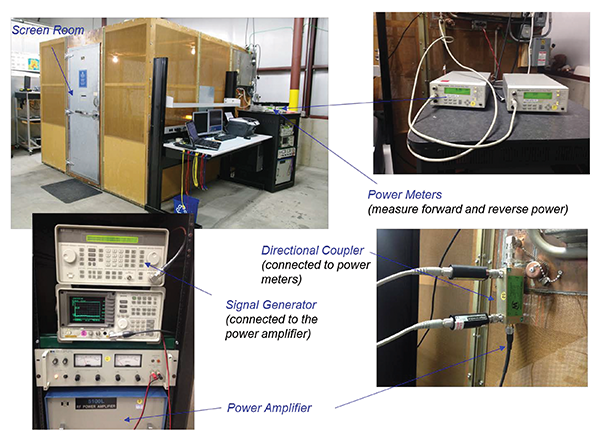 The block diagram of the test equipment configuration (outside the shielding enclosure) is shown in Figure 6. 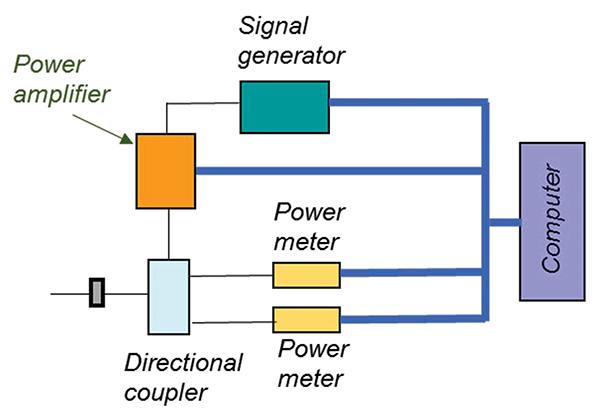 During the calibration procedure we need to measure forward power supplied to the injection probe (mounted in the calibration fixture) and the power reflected from it (reverse power). This is accomplished with the help of a directional coupler shown in Figure 7.

Figure 7: Directional coupler and its connections

These limits are displayed in Figure 8.

During the testing (in both methods) the AM modulated signal is used with the carrier frequency, fC, varied from 1 to 400 MHz. Let’s briefly discuss the modulation process. The unmodulated signal is a sinusoid shown in Figure 9a.

The modulating signal, shown in Figure 9b, is also a sinusoid of an angular frequency θ, corresponding to the linear (cyclic) frequency of 1 kHz. The amplitude of this sinusoid is controlled by the modulation index, m, where, 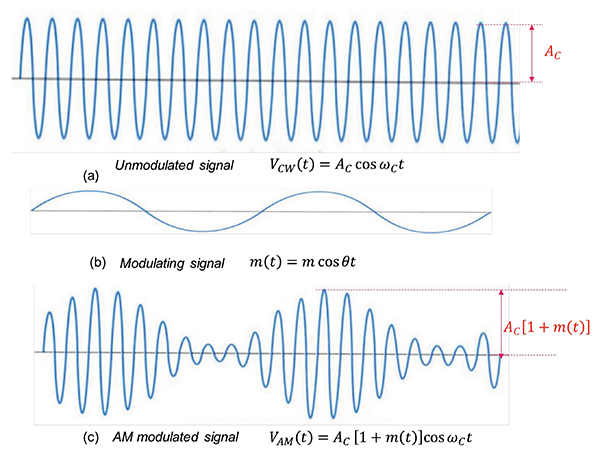 The peak conservation is achieved with m = 0.8. This AM modulation used in conducted immunity testing is often referred as AM 1 kHz, 80%.

For the above relation becomes

Thus, to adjust the amplitude of the carrier wave prior to modulation, the power is decreased by 5.1 dB and then AM modulating signal is added.

The test configuration for the substitution method is shown in Figure 11 and Figure 12, respectively. 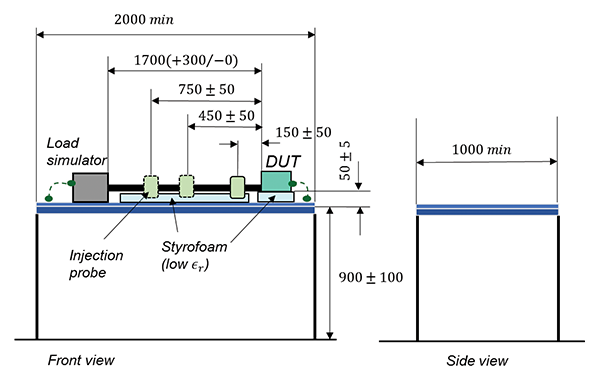 Note that the injection probe is placed at three different locations: 150, 450, and 750 mm from the DUT. For a DUT remotely grounded (vehicle power return line longer than 200 mm) two Line Impedance Stabilization Networks (LISNs) are used, (see [2] for LISN description and operation).

The test configuration for the closed-loop method with power limitation is shown in Figure 13 and Figure 14, respectively. 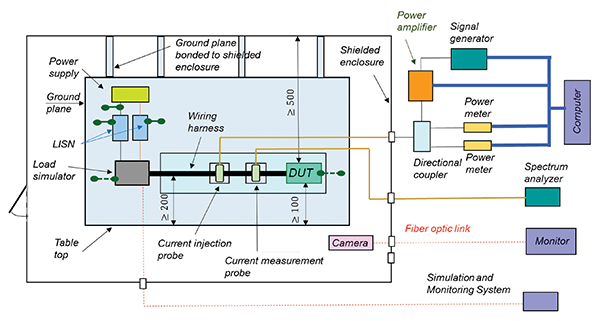 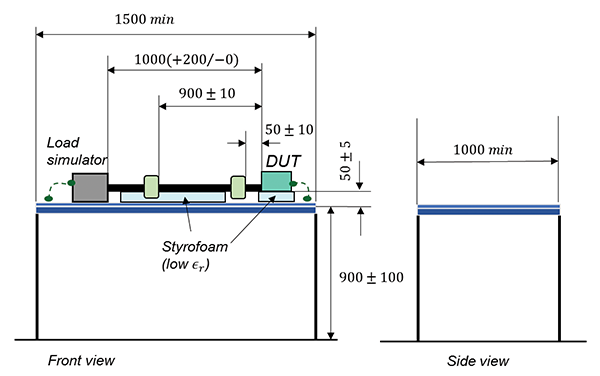 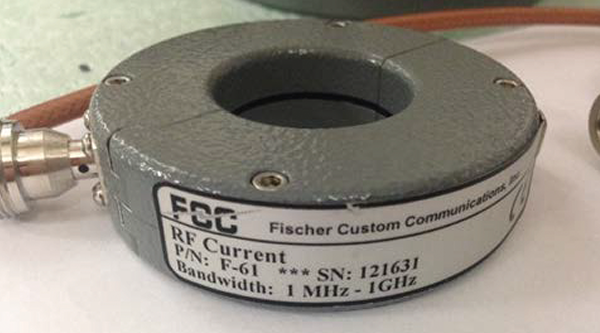 During testing power level recorded during the calibration is applied to the injection probe. The forward power is incrementally increased until the level used in calibration (that produced the required current in the 50Ω fixture) is reached. Current level in the wiring harness is measured using the measurement probe. If this measured current is below the level specified in Table 1, the power to the injection probe is increased until the specified current level is achieved or the power limit is reached. The power limit is specified by

where k is a factor equal to 4 unless otherwise specified in the test plan.

Figure 16 shows the passing test result for a DUT which was tested to the severity level IV, using the substitution method. 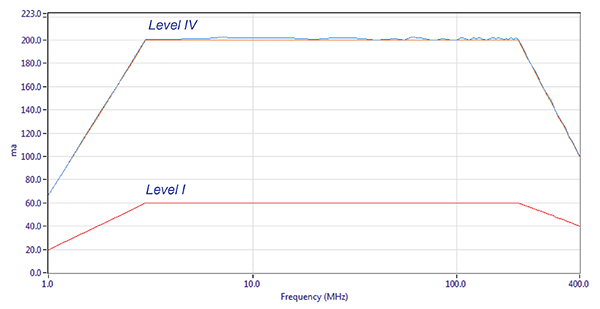 The current curve riding on the Level IV curve shows that there were no anomalies when the current reached the severity level IV. To be more precise, there were no anomalies when the forward power applied during testing reached the level used during the calibration. The actual current in the harness during the testing is not known (unless an optional current measuring probe is used).

Figure 17 shows the test result with anomalies for a DUT which was tested to the severity level IV, using the substitution method. 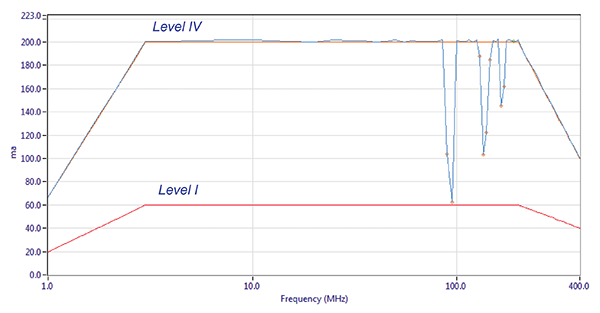 Figure 18 shows the test result when a DUT was tested using the closed-loop method with power limitation (note: the test limits in this plot do not correspond to the ISO 11452-4 specification). 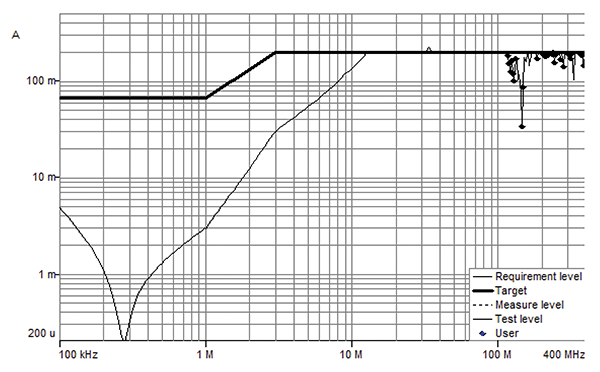 Notice that up to a frequency of 10 MHz the induced current did not reach the required level, even though the maximum power (equal to 4 times the calibration power was applied).

Anomalies are categorized as belonging to one of several classes. ISO 11452-1, [4], defines theses classes as follows.

Based on the DUT intended function, with respect to the conducted immunity, the DUT is usually also classified (by the manufacturer) as belonging to one of the test groups. These test groups reflect the severity of the DUT malfunction on the safety or functionality of other systems.

During the immunity testing, each test group must meet a set of minimum requirements defined by the functional status classification above.

Scott Mee is a founding partner of E3 Compliance LLC which specializes in product development and EMC precompliance testing. He is an iNARTE certified EMC Engineer and Master EMC Design Engineer.  Scott is an industrial partner of the EMC Center at GVSU.  He can be reached at scott@e3compliance.com. 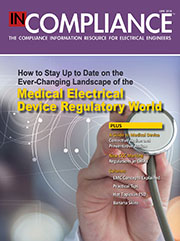