Behavior of Air and Solid Insulations in Series

In the column “Ask Dr. Z,” (The Product Safety Society Newsletter, July 19881) Dr. Z made the statement that “the failure was probably due to rubbing between the wire and the ground trace which scoured the coating to a thin enough layer to fail the dielectric strength test.” Probably not.

The insulation system had failed a 1500 Volt rms electric strength test. Dr. Z and his client presumed that the solid insulation — the coating on the inductor wire — had been scoured so that there was little or no insulation between the inductor and the ground conductor.

Dr. Z implied that many power supplies (or, at least those submitted to several certification houses) successfully passed the electric strength (hi-pot) test. How this could happen with the construction as described? That is, why did not more units incur the scouring and the reduced insulation thickness? Why did the first failure not occur until early production and AFTER completion of certification?

Have you ever tried to strip coating from magnet wire? It is tough stuff! One spec I checked is 1350 grams to fail a single scrape. Have you ever checked the electric strength spec for magnet wire? Typically, they are very much higher than product hi-pot voltages (2400 Volts rms or more for AWG 38 up to 7000 Volts or more for AWG 18). So, we have a mechanically tough coating which, even if it could be scoured, would still have a very high electric strength.

I don’t agree with Dr. Z’s hypothesis that the coating failed because it was scoured thin by rubbing of the insulation against the circuit board. I believe there is another and more satisfying explanation (hypothesis) for the hi-pot failure.

This is certainly a curious hypothesis: The system only breaks down if there is an air gap, and then only if the air gap is less than 1 millimeter. And, it does so without regard to the electric strength of the coating on the magnet wire!

How can this be? On the surface, this does not seem rational.

Conditions for Dielectric or Insulation Failure

On the other hand, Table AII of IEC 664 gives voltage breakdown values for various distances through air. We find that air breaks down at about 1250 volts/mm for distances up to about 1 mm, decreasing to about 620 volts/mm at 10 mm.

In between Tables AI and AII we have a sort of “no man’s land.” That is, we have a region where other factors such as electrode shape variation, air pressure variation, pre-ionization, etc., influence the actual withstand and breakdown voltages.

Therefore, one condition for insulation failure occurs when the applied volts/mm exceeds the withstand volts/mm of the insulation medium. See Figures 1a and 1b. 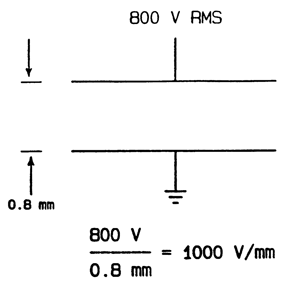 Figure 1a: Since 1000 V/mm is the same as the maximum withstand potential for air, this spacing will not breakdown. 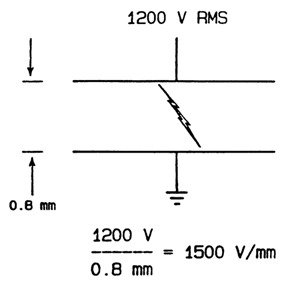 Figure 1b: Since 1500 V/mm exceeds the 1250 V/mm breakdown potential for air, this spacing breaks down.

When two capacitors are in series, voltage divides inversely proportional to the capacitance. That is, the smaller capacitor has the larger voltage drop across it.

With this physical law in mind, if we know the value of the two capacitors, we can determine how much voltage is dropped across each capacitor, and whether the volts/mm exceeds the breakdown value for each insulating medium.

Capacitance is inversely proportional to the distance between the conductors.

Now, we need only determine whether the volts/mm in air exceeds the breakdown voltage for air. (We can ignore the solid insulation as its withstand voltage exceeds the test voltage.)

Where
C is Capacitance,
k is the dielectric constant,
A is the area of the plates, and
d is the distance between the plates.

For two capacitors in series, we will assume that the area, A, of the plates is the same.

The voltage across anyone insulation within the capacitor is:

The total voltage is the sum of the voltages across each individual insulation. The percent voltage across the air in a series construction of air and solid insulation is:

The voltage distribution of a series construction of air and solid insulation for various values of dielectric constant, k, are shown in Figure 2. 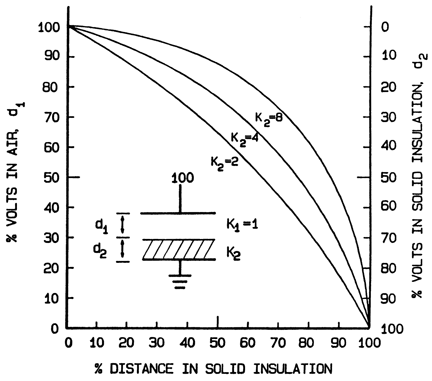 In a series system of air and solid insulations, and where the dielectric constant of the solid insulation is quite high, it may be necessary to also meet minimum spacing requirements in air to prevent exceeding the breakdown potential of air.

One final factor needs to be considered: the value of capacitance. Conduction in a gas has four distinct forms: corona, glow discharge, spark, and arc. IEC 664 states:

“One form may give place to another in quick succession depending on attendant conditions. Arc formation depends upon the presence of an electric field which tends to strip electrons from the positively charged nuclei of the atoms of the gas between the electrodes. Under the right conditions, these electrons collide with other electrons and release them from their atomic bonds in a cascading fashion. The net result is a flow of electrons, i.e., electric current and arc discharge.”

Note the condition of electric current. The magnitude of the current is a function of the value of capacitance. If the capacitance is very small, the current magnitude will be very small, and the succession of forms of conduction (corona, glow discharge, spark, and arc), will be limited such that a full breakdown as evidenced by an arc may not occur.

Therefore, for this process to occur, capacitance of the solid portion of the air-solid insulation system must be large enough to provide the current necessary to sustain an arc.

Fortunately, in most constructions, the value of capacitance is so small as to limit conduction in a gas to corona during the hi-pot test.

In any construction where two insulations are in series, the voltage gradient between conductors is not likely to be linear. Care must be taken such that voltage gradients (volts/mm) do not exceed the breakdown values for each insulation. This is especially true where one insulation is air and the distance in air is less than the distance needed for air alone (as was the case for Dr. Z’s client).

Obviously, in this case we don’t know whether or not the insulation was scoured or the air was subject to breakdown conditions. But, Dr. Z’s example gave me a good excuse to describe a phenomenon that I have experienced on many occasions. Perhaps you, too, have had this experience; if so, I hope this explanation fits the facts of your situation. 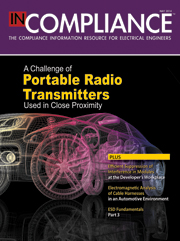