Because It’s All About the Current

I came across a paper that was written by my father, Dr. J. L. Norman “Norm” Violette, back in 1988. It was intended to be published, but apparently never was. Hence, in spirit of better-late-than-never, we serve up the original paper “Current Distribution and Ground Plane Impedance Coupling in Printed Circuit Boards and Backplanes” that was presented at the “EMC Expo 88” in Washington DC.

The paper discusses the importance of understanding the current distribution below a printed circuit board trace. Back in the day, there was much misinformation about controlling EMI from printed circuit boards. The logic technology at the time was approaching rise times of a few nanoseconds. These crisp edges were pushing the state-of-the-art in understanding how to handle the fidelity of the signaling in order to control radiation, crosstalk and ground plane coupling effects.

The paper initially lays out the model of two traces above a ground plane and the various physical factors that couple the traces electromagnetically. The paper further discusses the distribution of current in a ground plane under a physical trace. The distribution follows the math that governs the magnetic field, naturally. If certain spacing conditions are not well-governed, it is possible that circuits may be coupled to this current and interference may result.

The other aspect of this treatment is the critical need to control the return-current distribution for traces carrying high-speed signals.  This is optimally accomplished by employing a low-impedance ground plane structure; I still recall working on many PCBs that ‘cut’ the ground plane in some effort to control the flow. This was ultimately one of the worst things a designer could do as it generated high frequency voltages in the ground structure. Disastrous.

Lately, this essential understanding of signal and propagation has led to the growth of a design regime specialty known as “Signal Integrity,” or, getting high speed stuff to work correctly. The fundamentals of electromagnetic propagation always hold and in 2017, nearly 30 years from dad’s treatment, the IEEE EMC Society will host the 2017 International Symposium on Electromagnetic Compatibility and Signal and Power Integrity in Washington. Back to the future, or something like that.

Special thanks to Dr. Bruce Archambeault for reviewing Norm’s work. It stands the test of time.

Mike can be reached at mikev@ wll.com. 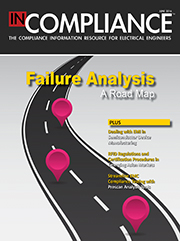