This article discusses the origins, justification, and interrelations between some of the basic EMC rules regarding the highest significant frequency (bandwidth) present in digital signals, the definition of the electrically short structures, and the transmission line criterion. The analytical basis and the interrelations between these rules are discussed, followed by the simulation and measurement results.

When the rise and fall times are equal, the one-sided Fourier spectrum of the trapezoidal clock signal can be represented as

The angle of the Fourier coefficients is given by

The spectral coefficients in Eq. (3) exist only at the discrete frequencies f = n/T. The continuous envelope of these spectral components is obtained by replacing n/T = f  in Eq. (3):

The (envelope) bounds in dB are shown in Figure 2. 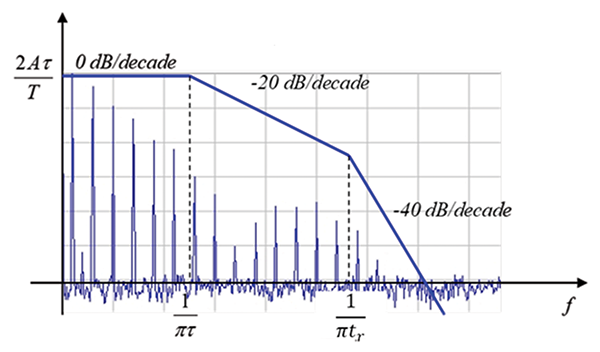 Figure 2: Bounds on the magnitude spectrum of a trapezoidal clock signal

Note that above the frequency f = 1/π tr the amplitudes of the spectral components are attenuated at a rate of 40 dB/decade. It seems, therefore, reasonable, to postulate that somewhere above this frequency these amplitudes are negligible (as compared to the magnitudes of the components at lower frequencies) and can be neglected in the Fourier series expansion shown in Eq. (1).

A reasonable choice for that frequency is [1]

With this choice of the highest significant frequency given by Eq. (8) infinite summation in Eq. (1) can be replaced by the upper limit of N, where N corresponds to the highest harmonic up to the maximum frequency in Eq. (8), i.e.,

Figure 3 shows the results of the summation in Eq. (9) with N = 20, (harmonics up to the half of the highest significant frequency).

Figure 3: Signal reconstruction with harmonics up to ½ fmax

Note the overshoot and ringing present in the reconstructed signal. Next, let’s sum up all the harmonics up the value of the fmax, i.e. for N = 40. This is shown in Figure 4.

Figure 4: Signal reconstruction with harmonics up to fmax

We note a visible improvement in the signal integrity. To complete the verification, let’s sum up all the harmonics up the value of the 2 fmax, i.e. for N = 80. This is shown in Figure 5.

Figure 5: Signal reconstruction with harmonics up to 2fmax

While we see further improvement in the reconstructed signal, the improvement is not as significant as from N = 20 to N= 40. We conclude that the simulation results agree with the criterion in Eq. (8).

Let’s verify this by the spectral measurements (see [2] for the measurement setup). Figure 6 shows the frequency spectrum of a 10 MHz, 1V, trapezoidal clock signal with a rise and fall times equal to 2.5 ns. 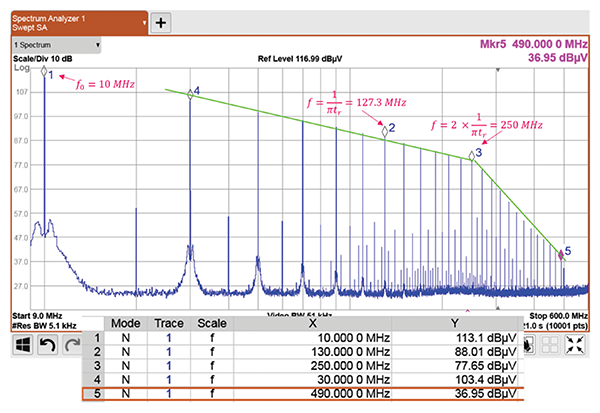 Superimposed on the spectrum are two straight lines connecting the peaks of the spectrum. Note that the slopes of these lines conform to the envelope slopes shown in Figure 2. The breakpoint where the peak slope changes from 20 dB to 40 dB is at f = 2/π⊇tr validating the theoretical conclusion that past the frequency f = 1/tr the amplitudes of the frequency spectrum are attenuated at 40 dB/decade.

To answer this question, consider a circuit shown in Figure 7, with the time delay (one-way travel time) is TD = 9 ns.

Let the source signal be a pulse with variable rise time. Figure 8 shows the voltages at the source and the load with the rise time tr = 2.5 ns, (see [3] for the measurement setup). 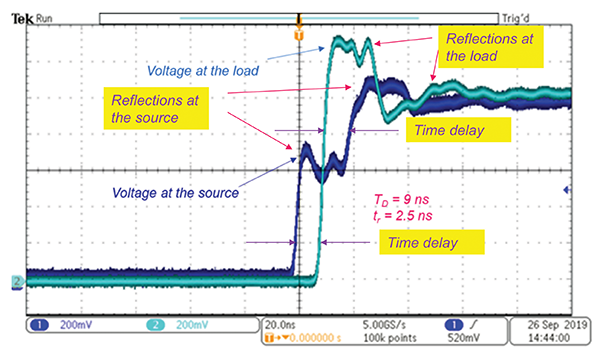 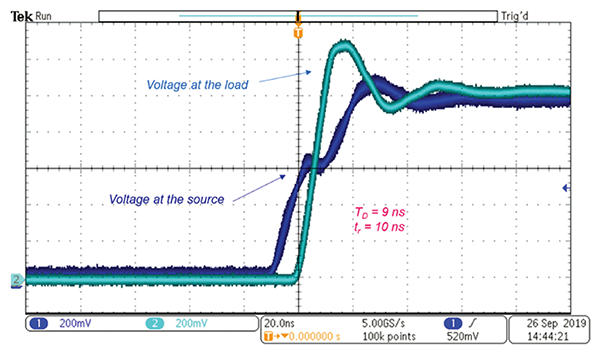 Note that the time delay and the reflections become smaller. Let’s increase the rise time to 50 ns. The result is shown in Figure 10. 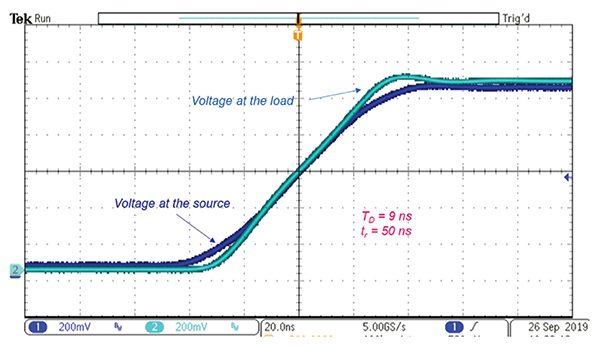 Notice the further decrease in the time delay and reflections. Finally, let’s increase the rise time to 100 ns. The result is shown in Figure 11. 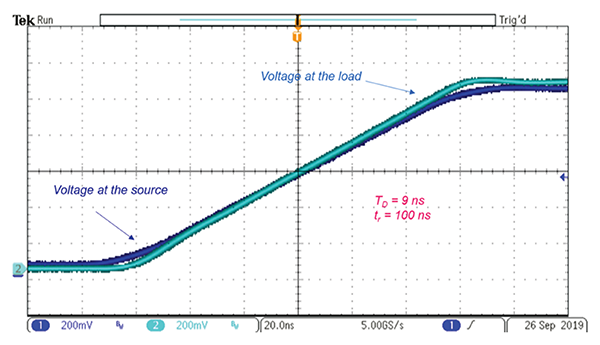 The line does not need to be treated as a transmission line when the pulse rise time tr is greater than, or equal to, 10 times one-way time delay TD of the line.

Next, we will derive an equivalent frequency domain criterion.

Recall from Eq. (8) that the highest significant frequency present in a pulse signal is

The one-way time delay TD is related to the line length, L, and the velocity of propagation, v, by

The wavelength λ is related to the velocity of propagation, v, and the frequency f by

We have arrived at the (frequency domain) transmission line criterion:

The line does not need to be treated as a transmission line when its length L is smaller than, or equal to λ/10, where λ is the wavelength at the highest frequency of interest.

The condition in Eq. (17) is also the criterion for the electrically short structures.

A physical structure, or a physical distance, is considered electrically short when its physical length L is smaller than, or equal to λ/10, where λ is the wavelength at the highest frequency of interest.