Seven examples of EMI from Anita Woogara. Items 92 to 98 are taken from “Study to predict the electromagnetic interference for a typical house in 2010” by Anita Woogara, 17 September 1999. This and many other interesting documents may be found by hunting around the (legacy) Radiocommunication Agency’s website hosted on Ofcom’s site at: www.ofcom.org.uk.

92.  Hearing aids operate between 200 – 4000Hz. Manufacturers have to comply with the Medical Devices Directive and the IEC118-13 ‘Immunity of hearing aids from interference with cellular phones’. However, due to the interference experienced, it is not felt that these are adequate for those (hearing aid) users who also wish to use items such as mobile phones.

93.  Mobile phones and passing taxi radios have been known to interfere with Anti-skid Braking Systems (ABS) and airbags, causing drivers to lose control of the car.

94.  Railways cover most of the country and can pass quite close to residential buildings and hence affect the equipment inside them. Additional immunity constraints are placed on the users of information technology equipment in the near vicinity. However, it is unclear how suppliers know that their users will be situated near railway systems. (The study makes similar comments about tram systems, and the problem is their low-frequency magnetic field emissions.)

95.  Mobile phones are becoming so popular that in America it is difficult for people to have a phone call without being cut off due to interference. This is leading to people suing mobile phone companies for not providing the advertised service.

96.  Cochlea implants are small electronic devices placed under the skin to assist hearing. Unfortunately, they are prone to interference, such as the security checks at shop entrances and airline security, which can damage an implant. People with cochlea implants have also been told not to use mobile phones.

97.  The (UK) government is trying to encourage people to use public transport. An incentive to use public transport would be punctuality. BT is investigating an idea which would enable the time of arrival of the bus to be checked by using either the web or a mobile phone or pager. The bus would be fitted with a GPS tracker so that its position could be monitored. This technology would be useful but in large cities GPS on buses might not be that reliable, due to the interference.

98.  Electronic tagging takes the form of a small bracelet worn around the wrist or ankle. Presently the (UK) Home Office is the main user of electronic tagging, keeping track of prisoners in the community. Children could be fitted with a tagging bracelet before setting off to walk to school and parents could be notified if the child wanders off the route, via mobile phone or pager. The problem with this would be when the GPS signal was interfered with and incorrectly showed that the child was off the route. This interference is likely to take place in cities. These problems already occur with prisoner tagging. (For more on GPS problems see Banana Skin No. 29.)

Elaine Scarry has found some common threads in the crashes of TWA 800, Swissair 111, and Egyptair 990, that indicate a significant possibility that they were brought down by electromagnetic interference from military aircraft or ships on exercise. This possibility does not appear to be under consideration by the accident investigators for these incidents.

Read her articles in the New York Review of Books by going to www.nybooks.com and then searching their archives using the author’s name.

100.  My neighbour has had a new heart pacemaker fitted – every time he makes love my garage doors open

(Attributed to Bob Hope, 1975. We try to find amusing or off-beat items for our 100th Banana Skins.)

This estimate is from the European Copper Development Association, and is the first attempt to pin down the cost in Europe of voltage deviations, transients, interruptions, and harmonics, says the organisation. These problems are increasing because of the growing use of equipment such as switch-mode power supplies, variable-speed drives, and high-frequency lighting, it adds.

The use of such polluting equipment means that 70-80% of power quality problems are caused by operations on sites, rather than by external effects, says the institute. Problems produced by poor-quality power include glitches in computers, burnt-out motors, failed transformers and fires caused by high neutral currents.

102.  Harmonics from low-voltage lighting can cause overheating

In the lighting industry, simple switch-mode power supplies with AC outputs, often called “electronic transformers”, are used increasingly to operate 12 volt lamps from the mains supply. In a retail store 50-100 of these units each rated around 50W would not be uncommon.

Most of these devices claim to meet the EMC Directive individually and are CE marked. However if a number of these devices are operating in one location, then their total emissions can be shown to exceed the limits for both RF and harmonics, sometimes by a large margin.

There are already instances of other equipment malfunctioning, and of sine wave distortion causing conventional transformers to overheat (due to enhanced core losses). I have experience of a building which had recently been fitted with about 50 off 50W “electronic transformers”, the harmonic emissions from which so distorted the mains supply waveform that conventional transformers powered from the same mains distribution overheated.

Clearly, this is not just an EMC issue, but a significant safety concern. But my experience so far is that lighting equipment manufacturers, on the whole, don’t seem to understand this significance of this problem, and that installers could not care less.

Another common problem is that of knowledge of Directives. Some contenders appear to have a hazy understanding of the EMC and LV Directives for example.

(Stuart Wetherall, Publisher, writing about the ‘Panel Builder of the Year Awards in Panel Building Magazine, September 2000 pages 12 to 20.)

Just a note of thanks for your illuminating series in EMC Journal. As an electrical layman I found them helpful when trying to analyse my 10-year dissatisfaction with the Israeli brand of mains, which seems to contain harmonics from 9th upwards (see the sketch below). 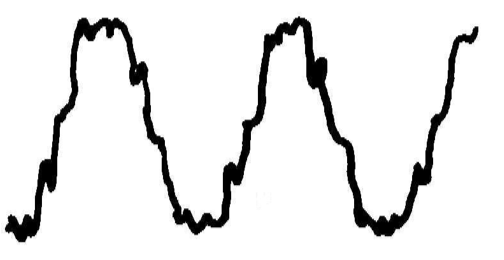 Not only does the mains supply show obvious clipping, ringing, crest flattening and zerovolt crossover distortion, but the thick line (represented by my crude felt-tip trace) resolves itself into stable “carrier wave” oscillations at 10kc to 10MC (which is why my AM radio gives off sounds like a buzz-saw at BBC World and other frequencies). “What in the developed world would constitute a road-hazard, in the developing world often has to serve as the road”.

Video cameras in racing cars provide exciting live pictures for TV, but the image is often spoilt by interference. 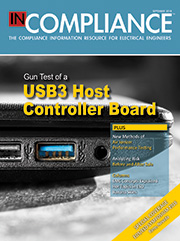