211.  Transients and noises on mains power supplies cause communications problems

Its an all too familiar scenario. You’re on the phone to an important customer, and – far from being able to hear whether he’s about to place the biggest order of the year – all you hear is an irritating crackling on the line.

Well, if its any comfort at all, you are not alone. Every year, thousands of users report that their critical business calls have suffered, for some inexplicable reason, from intermittent hissing, buzzing, crackling, and general interference. And when the phone companies investigate the phenomenon, they find nothing wrong. It’s a phenomenon that frustrates IT departments, telecoms engineers, sales managers, directors, in fact anyone that has to use a phone for business.

But this understandable annoyance that many of our industries suffer as a result of poor quality voice communications is nothing compared to the potential loss of revenue that can arise if their data systems suffer the same fate. And yes, you’d better believe that this is exactly what too many businesses are experiencing at this very moment.

I’m not suggesting that spikes and surges in the power supply are at the root of each and every problem, there is little doubt that they contribute to a significant number of these anomalies and aberrations. In fact, no lesser source than IBM’s Systems Development Division comments that “More than 80% of mains power problems are transient and noise related.”

Two individuals have filed a petition with the FCC for reconsideration of a proposal that would require all electronic equipment to be shielded against electromagnetic pulse (EMP). With the prospect of future terrorist attacks clearly on their mind, the petitioners wrote that there is “the need for mandatory shielding to protect vital civilian equipment from the possible hostile use of an Electromagnetic Pulse (EMP)”.

Every time the passenger ferry passed a certain point leaving the harbor, the automatic logging system was reset to its default settings. This always happened late in the evening, around 23:00. Strangely enough, this problem never occurred when the ferry was arriving at the harbor. After a thorough investigation, it was found that at 23:00 the stoves and ovens in the kitchens were switched off for the night. The transient overvoltages from the switch-off found their way to the bridge via the signal and power cables on board. The investigations also showed that no cable screens at all were correctly grounded.

The problem with the log was solved by introducing cable feedthroughs with electromagnetic disturbance protection, and by adding transient filters.

Offshore oil and gas production platforms present an extremely difficult electromagnetic environment due to the amount of electrical and electronic devices crammed into a small space. In this case, a platform was anchored to the sea bottom, but its exact position was adjusted by thrusters, i.e. large electric motors driving propellers. The position of the platform was controlled by a computer system. The power and control cables, all screened, were routed from the control room on the bridge at the top of the platform, all the way down to the engine rooms far below. However, the cable feedthroughs were not protected against electromagnetic disturbances. Com radios (i.e. walkie-talkies – Editor) were used both on board the platform and for communication with land.

Bad EMC design caused operating problems in a quality control system in a foundry. The quality control system consisted of two subsystems, a robot subsystem and a measurement subsystem. An industrial robot picked up the heavy metal pieces and placed them at the measurement system. The measurement system checked for the presence of cracks in the metal. The electromagnetic environment was tough, with motor drives, arc-welding equipment and electric forklifts nearby. The problem was intermittent malfunctions in the entire system.

The measurement subsystem was not divided in electromagnetic disturbance protected zones at all. Some of the cables were screened, while others were not. The screened cables entered the control cabinet via a large opening in the cabinet floor. The internal layout of the control cabinet was not done according to EMC principles. By redesigning parts of the measurement subsystem installation, it was possible to bring the operating problems down to an acceptable level.

A system to combat satellite interference, which costs operators millions each year in lost bandwidth, has been developed in the UK. Qinetiq’s satID system is designed to pinpoint ground bases inadvertently transmitting to an operator’s satellite, and using up some of their expensive bandwidth. The introduction of satellite services, the growth of personal satellite communications technology and congestion of the geostationary arc are increasing these interference problems, said Dr Rob Rideout, senior scientist for geolocation at Qinetiq.

“Satellites suffer a lot from interference, and as satellite transponder bandwidth is an expensive resource, to have that tied up is a big commercial problem for operators. The cost could run into many millions.” The vast majority of satellite interference is not malicious, but results from equipment failure of operator error. “Someone could be operating at the wrong frequency due to an equipment malfunction, or an operator could be pointing at the wrong satellite.”

I was very interested in Rob Coppinger’s article ‘Jaguar tests cars for radiation’ (News, 1 March) which reported on Volvo’s decision to make adjustments to three of its models after they were found to generate a high level of electromagnetic radiation (EMR). I purchased a new VW Golf – which in common with all modern cars is full of high-tech gadgetry – and found that the electromagnetic fields were some 100–200 times greater than they had been in my old Peugeot.

Allen Brown (Letters, September) asks whether there is any explanation as to why electric light bulbs sometimes ‘sing’ just before they fail. If a lamp filament fails during use and the break is not sufficient to interrupt the current, an arc will form across the break. Arcs formed in this way can be surprisingly long if the ends of the filament move. The singing is the sound of this discharge, possibly acoustically modified by the thin glass envelope. Therefore filament lamps start to sing when they fail and not before. On a safety note, as this discharge is a UV source it is not advisable to look at a ‘singing lamp’ in view of the chance of ‘arc eye’, but to switch it off. If the singing was due to arcing across a break, the lamp will of course not light again.

I first met the ‘singing light bulb’ effect as a very junior technical assistant in a lampworks in the mid-1930s. Part of my job was to inspect the life-test racks twice daily, perform the BSI 161-1936 specified interruptions in supply, and record failures. Out of several hundred lamps on test, it was not uncommon to find one ‘singing’. The explanation is, of course, that the tungsten coil, having suffered long, has now parted at its weakest point and is now arcing using the remains of the tungsten coil as ballast. Left undisturbed it may run for some hours, depending largely upon the pressure and purity of the gas filling.

(These two contributions are from Alan Vicary and William J Chapman respectively, published in the Letters page of the IEE Review November 2002, page 25, http://www.theiet.org. The Editor wonders whether any RF emissions measurements have ever been made on a ‘singing’ light bulb – he would expect there to be a significant emissions of broadband disturbances, probably modulated at the audible ‘singing’ frequency, peaking at the resonant frequencies of the mains wires. Filament light bulbs are often held up as an example of a “passive EM” device, i.e. one causing no electromagnetic emissions and unaffected by electromagnetic disturbances. But ‘singing’ light bulbs not too uncommon, and it seems that about 1% of ordinary coiled filament light bulbs are VHF transmitters at between 28 and 45MHz – see Banana Skin No. 159.) 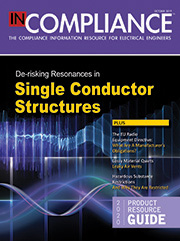