Banana Skins numbered 316-317 describe interference events that we might not be too surprised to hear about in or after 2015.

A number of people who had been enjoying weightless activities in the non-spinning central hub of Virgin Space Ltd’s newest hotel “Arthur C Clarke III” found themselves trapped on the ‘ceiling’ for 15 minutes, unable to reach the doors that were now 6 metres ‘up’ a smooth wall. The cause was a new cleaning droid. When it plugged itself into the wall sockets in the corridor in the engineering section a 0.5g acceleration occurred. It was later found that the corridor power sockets were on the same branch of the power bus as the navigation computer, and conducted interference from the new droid caused the asteroid-avoidance emergency thrusters to fire. The droid has refused to comment.

(Possibly from the Sunday Times News Review section, one week in 2015.)

The 30nm silicon fabrication process is now well-established and helping create many products and provide services that even ten years ago would have been considered science fiction. But investigations by York University into claims of unstable personalities in the latest models of robotic personal companions has revealed that ICs made with 30nm silicon features are very susceptible to the 76GHz radars used by the car-train systems required by automated highway systems. 76GHz automotive radar technology first appeared in the early years of this century as ‘intelligent cruise control’ or ‘automatic emergency braking’ systems for luxury vehicles, and is now ubiquitous. York University is now seeking sponsors for a programme of investigation into low-cost techniques for shielding and filtering at 76GHz.

(Possibly from the News section of The EMC Journal in 2015.)

An example of a subtle change in hardware configuration to the original design concept can be found in a life vest. The life vest was fielded with a bridgewire EID that could be fired by a salt-water activated battery pack that had been hardened and certified for HERO. After introduction into the fleet, an engineering change proposal was developed, and approved, to modify the type of battery used in the battery pack. The change was not submitted for HERO consideration. When the life vests were equipped with the new battery pack and used on board Navy ships, there were reports of uncommanded activation of the vests during flight operations and on the flight deck. The subsequent investigation found that the new battery pack made the EID subsystem resonant to a ship radar system; thereby creating susceptibility problems.

319. Most ESD test generators do not simulate real-life ESD events

Even though all the (ESD test) generators have peak current values and risetimes very similar to the ones specified in the standard, some of the generators fail the equipment under test (EUT) at vastly different voltage levels from the others. A range of 1:5 is shown in the second part of this two-paper series. This indicates that even though all the generators are made in accordance with IEC 61000-4-2 they produce different ESD events leading to a serious repeatability problem when the same EUT is tested with different brand generators. The problems have been well documented although the connection between parameters and EUT failures has been speculative so far.

As the fraction of devices that use fast CMOS is increasing, and going to continue to increase in the future, changes in the ESD standard are needed. Without such changes, the growing fraction of devices that can respond to pulses having widths of tens to hundreds of picoseconds will lead to an increasing dependency of the test result on the model of ESD generator selected.

For an EUT that reacts to the lower frequency (<1GHz) current components, the effect of changing the ESD generator model should not be larger than 1:3. In fact, we have not observed any ratio of EUT failure voltages above 1:2. In contrast, modern CMOS circuits with less than 0.15µm technology can react to pulses as narrow as 50ps. These circuits will respond to the fast-changing (unintended) components of the induced voltage. The effect (on such fast devices – Editor) of changing the ESD generator model may be as large as 1:10, as the spectral density varies by more than 20dB, as shown in our Fig. 3. Our observations showed a 1:5 variation.

With the introduction of more and faster CMOS circuits, the large influence of the ESD generator model, shown in Fig. 4, will occur more often if the ESD standard is not improved.

How many of the ESDs will have a larger severity than the reference event? Due to the strong dependence on factors like humidity, personal activity, clothing, etc, there is no final answer. Generally, for lower voltages the typical rise times are much shorter and the rate of occurrence of ESD is larger, but fast rising ESD having less than 300ps rise time can also occur under dry conditions and fast approach speeds at voltages as high as 15kV.

These low-voltage ESDs and higher voltage ESDs having short arc-lengths show short rise times, as low as 50ps, thus their high-frequency content is much stronger. Up to now some widely used ESD generators not only covered the spectral content of the proposed reference event, but also tested for fast rising ESDs. They did not do so intentionally, but as a result of their design, which was based on incomplete understanding of the failure mechanisms in fast electronic systems and insufficient specifications.

In our opinion, the ESD standards IEC 61000-4-2 should be revised such that ESD generator performance is as similar to the reference events as possible in all their parameters. But manufacturers and users need to be aware that the standard does not cover all possible ESD events. For example, medical equipment might need to be tested using a shorter rise time to cover a larger portion of the real ESDs, notwithstanding furniture ESD or other ESD types. The standard needs to be understood as a minimum requirement, passing it does not protect against ESD related field failures.

Customers at two garages in Birmingham are reportedly being forced to freewheel their cars off the forecourt. ‘National Tyres’ and ‘Car Spares’, both on the city’s Stratford Road, are experiencing interference from phone masts on the roof of the Centre Court office block and visitors to the sites have to push their cars nearly 100 yards out of range of the masts before starting them.

Clive Carter, from National Tyres garage, and Keith Murphy, from Car Spares, told the Birmingham Post that many customers could not start their vehicles in their forecourts. It is believed the mast’s rays are interfering with car’s ignition systems, immobilisers and alarms. Mr Carter said: “This has happened at least 20 times in the last year. The strange thing is that when a car is pushed down the road it starts easily. The mobile phone masts seem to be the only explanation for it.”

(Taken from the HSE’s internal newsletter, 7/3/05, sent in by Simon Brown)

A hi-tech device that can bring speeding cars to a halt at the flick of a switch is set to become the latest weapon in the fight against crime. Police forces in Britain and the US have ordered tests of the new system that delivers a blast of radio waves powerful enough to knock out vital engine electronics, making the targeted vehicle stall and slowly come to a stop.

David Giri, who left his position as a physics professor at the University of California in Berkeley to set up a company called ProTech, is developing a radio wave vehicle-stopping system for the US marine corps and the Los Angeles police department. Tomorrow, at the Euroem 2004 science conference in Germany, Dr Giri will describe recent trials of the device. The tests proved that the system could stop vehicles from up to 50 metres away.

The bulk of the device is designed to fit in a car boot and consists of a battery and a bank of capacitors that can store an electrical charge. Flicking a switch on the dashboard sends a burst of electricity into an antenna mounted on the roof of the car. The antenna then produces a narrow beam of intense radio waves that is directed at the vehicle ahead. When the radio waves hit the targeted car, they induce surges of electricity in its electronics, upsetting the fuel injection and engine firing signals. “It works on most cars built in the past 10 years, because their engines are controlled by computer chips,” said Dr Giri. “If we can disrupt the computer, we can stop the car.” A prototype is due to be ready by next summer.

The Association of Chief Police Officers confirmed that researchers at the Home Office’s police scientific development branch are testing a radio wave vehicle-stopping system. “There’s a potential to use this type of device to stop criminals on the road. High speed pursuits are very dangerous, especially in built-up areas,” said an association spokesman. 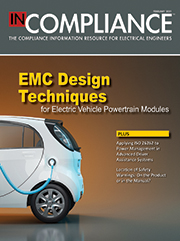