Are Standards Still Important? Even More So in the Global Economy

Standards are increasingly important in our modern global economy – supply chains can be dizzyingly complex, and implementing the economic theory of comparative advantage has been more and more possible as the relative cost of transportation has declined over the years. Since the 1890s, the United States has been the world’s top manufacturing country. The world continues to change. Recently it was reported that China surpassed Japan as the second largest economy, and it is estimated that China will soon surpass the United States.

What does “Made in China” mean? Or for that matter, “Made in America?” The Wall Street Journal recently published an article about a premium computer mouse with the label “Made in China.” The article detailed the global supply chain effort to efficiently bring all components to assemble the mouse together. The logistics were complex and quite impressive. The two highest value components, an integrated chip and the optics, were manufactured in the United States. The plastic parts were molded and the mouse assembled in China. Globalization has produced a plethora of goods at attractive pricing, a modern miracle.

How do all the various manufacturers, customers and suppliers communicate to have meaningful metrics from facility to facility around the world? Industry Standards play a major role in ensuring that what is designed in one place can be built in another. For instance, in manufacturing, having uniform quality requirements and testing procedures is necessary to make sure that all involved parties are speaking the same language. In ESD control programs, standard test methods have been developed for component ESD test models to measure a component’s sensitivity to electrostatic discharge from various sources. Standard test methods for product qualification and periodic evaluation of wrist straps, garments, ionizers, worksurfaces, grounding, flooring, shoes, static dissipative planar materials, shielding bags, packaging, electrical soldering/desoldering hand tools and flooring/footwear systems have been developed to ensure uniformity around the world.

The standard covering the requirements for creating and managing an ESD control program is ANSI/ESD S20.20: ESD Association Standard For the Development of an Electrostatic Discharge Control Program for Protection of Electrical and Electronic Parts, Assemblies and Equipment (Excluding Electrically Initiated Explosive Devices). ANSI/ESD S20.20 is a commercial update of MIL-STD-1686 and has been adopted by the United States Department of Defense. In addition, the 2007-2008 update of IEC 61340-5-1 Edition 1.0: Electrostatics – Part 5-1: Protection of Electronic Devices from Electrostatic Phenomena General Requirements is technically equivalent to ANSI/ESD S20.20. According to Ryne Allen’s 1999 article, “The [S20.20] standard was initiated under the guidance of the late Joel P. Weidendorf of IBM when he was chairman of the ESD Association Standards Committee. It went through 18 versions before the final approval by the ESD Association and then was reviewed and approved by the American National Standards Institute.”

In order to meet the global need in the electronics industry for technically sound ESD Control Programs, the ESD Association has established an independent third party certification program. The program is administered by the ESD Association through country-accredited ISO 9000 Certification Bodies that have met the requirements of this program. The Facility Certification Program evaluates a facility’s ESD program to ensure that the basic requirements from industry standards ANSI/ESD S20.20 or IEC 61340-5-1 are being followed. There are currently more than 180 facilities certified worldwide.

Global competitiveness is facilitated by promoting and using voluntary consensus standards and conformity assessment systems. Does it work? The improving complexity, value and reliability of products containing electronics would indicate that the answer is a resounding “Yes.” Standards greatly enhance the ability to understand and communicate technical requirements around the world. 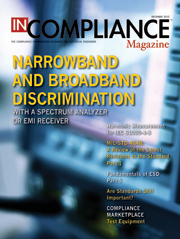